Testicular cancer, especially testicular germ cell tumor (TGCT), often happens in young and middle-aged men, and has a higher treatable rate than other cancer (1). The high survival rates contribute to the long-term burden of this cancer: patients often suffer from infertility, sexual dysfunction, and many other unknown treatment complications (2-4). In 2019, according to the latest data from 2002 to 2016, it is estimated that there will be 9,560 new cases of testicular cancer worldwide, of which 410 may be killed (5). In general, the incidence rates of testicular cancer appear to increase over time: for example, the incidence in the United States had increased steadily for about 10 years, and this growth trend will continue in the next 10 years (6).

Some studies researched this disease by analyzing the burden of testicular cancer in which is primarily confined to a country or a certain region (7,8). We collected data from the Global Burden of Disease data base (GBD), analyzed the temporal trends and simultaneously, estimated the incidence and death rates of testicular cancer in the next few years by 2030. Moreover, this study analyzed the temporal trends in several subgroups, including age, region, and sociodemographic index (SDI: a summary indicator of income per capita, educational attainment, and fertility). Understanding these factors is essential to provide the information about testicular cancer etiologies and the different changes in different subgroups.

Due to enormous cancer-relate economic burden, appropriate policies need to be developed to address this health issue so that health resource can be reasonably allocated. For this reason, the results of this study are sufficient to guide healthcare decisions and adjust implement plans.

Our research team collected the reliable data on testicular cancer in GBD. Many methods of analysis and estimation of existing data have been previously reported (9-14). The current study complies with the Guidelines for Accurate and Transparent Health Estimates Reporting (GATHER) (15). This time series is re-estimated overall compared to the published studies (16,17), and the results revealed by this study may replace previous studies. Testicular cancer is divided into 4 groups in incidence including C62−C62.92, Z80.43, Z85.47−Z85.48 in ICD-10 by International Classification of Diseases (ICD), and 4 cancer groups in mortality including C61-C61.9, D07.5, D29.1, D40.0 in ICD-10. Based on the collected data, we predict the disease burden of testicular cancer in different SDI countries and regions. The rates are calculated per 100,000 person-years. Age-standardized rates are calculated according to the GBD world population standard (18). Uncertainty intervals (UIs) are also reported.

Estimation process reported by this study begins with cancer mortality. Data sources of cancer mortality include vital registration systems (84% of data in 2016), cancer registries (16% of data in 2016), and verbal autopsy data (0.7% of data in 2016). Cancer incidence data are used to estimate mortality in some places where do not contain cancer death data by multiplying incidence by mortality-to incidence ratio. Cause of death ensemble model (CODEm) also can be appropriate for the death estimated data (11,19). Using the mortality-incidence rate (MIR) divides final cancer-specific mortality estimates to estimate cancer incidence. Statistical programming was done using the R statistical program version 3.4 and SAS version 9.3. Related methodological details can be found in Supplementary materials. 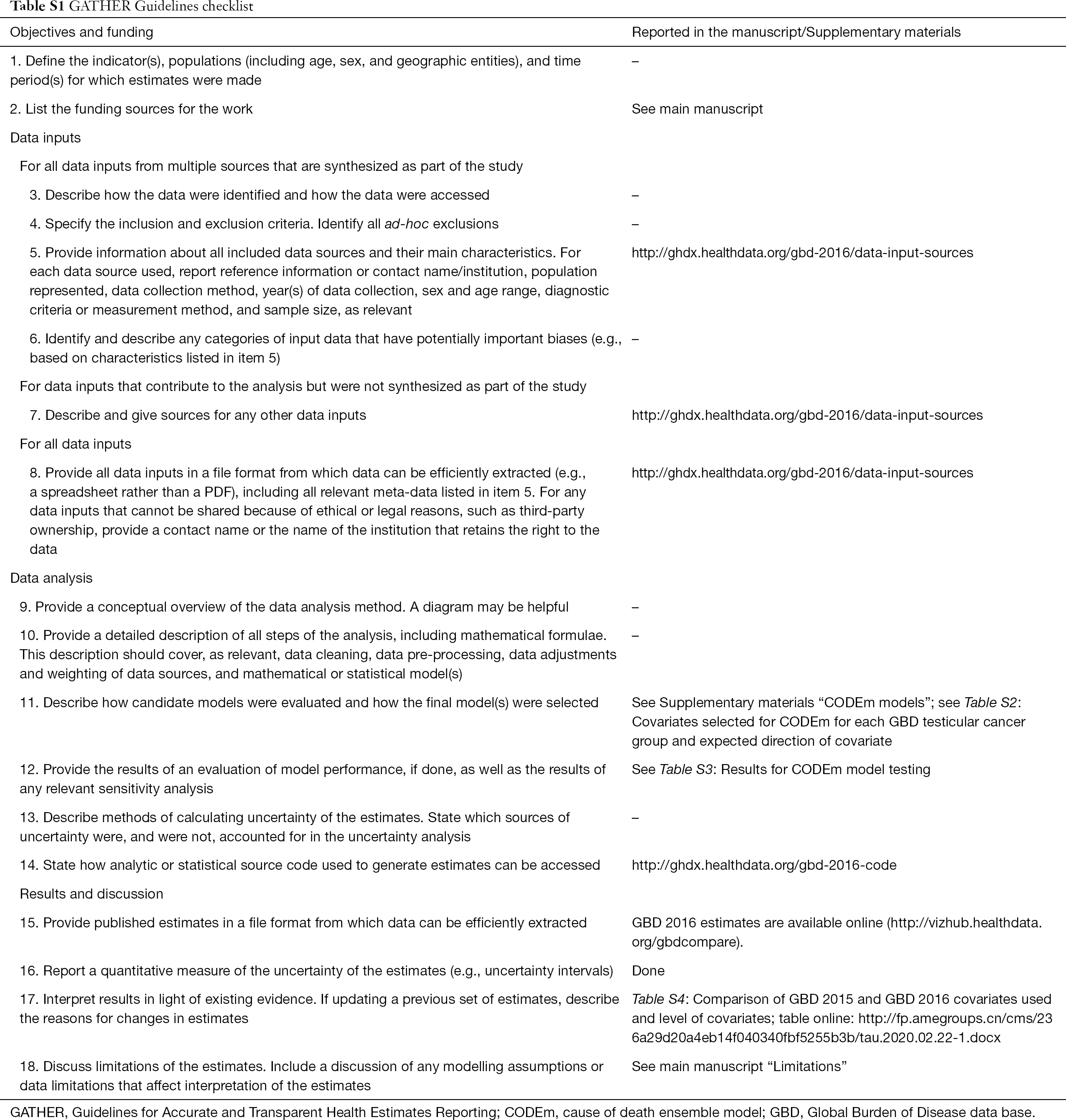 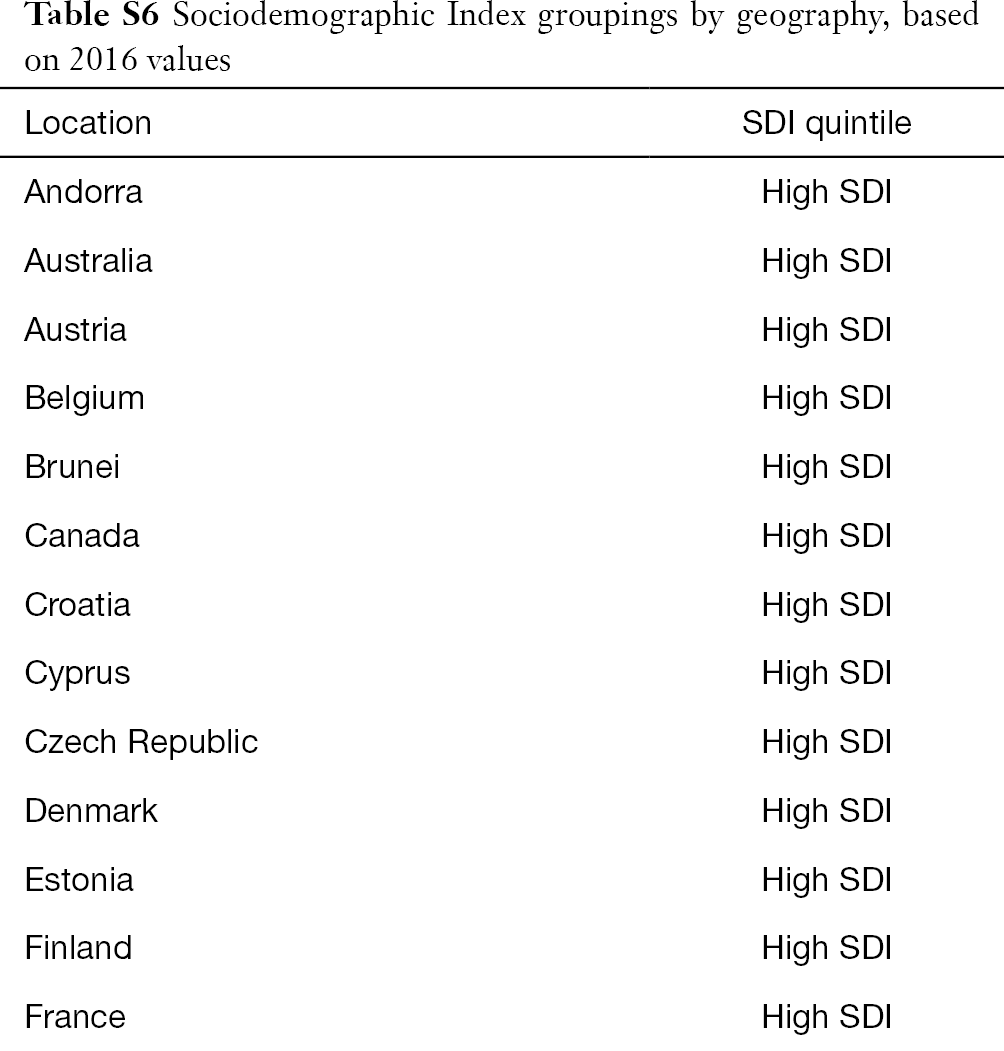 Table S8 Decomposition analysis of testicular cancer incidence trends at the global and regional levels, and by SDI quintile, both sexes, 2006 to 2016
Full table 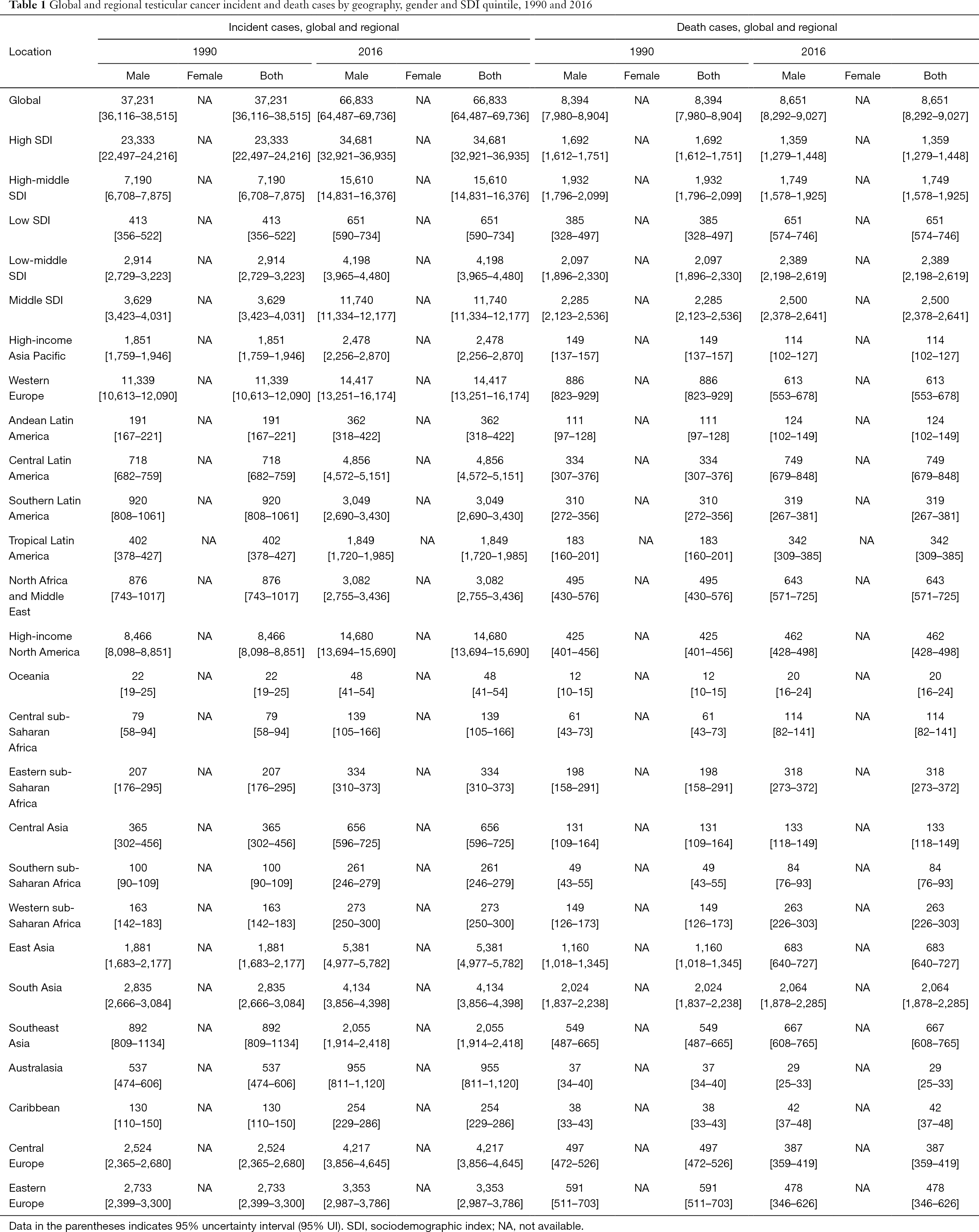 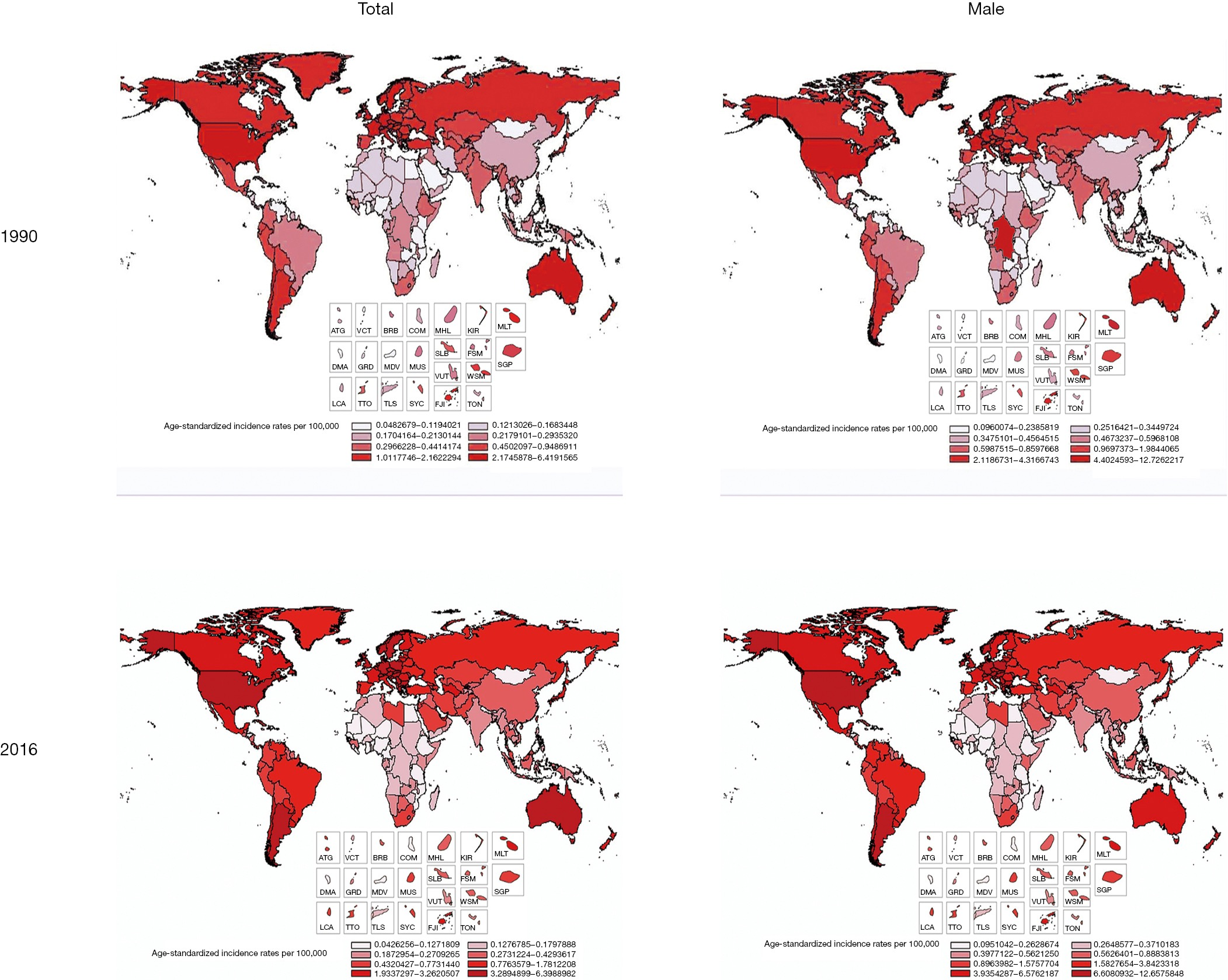 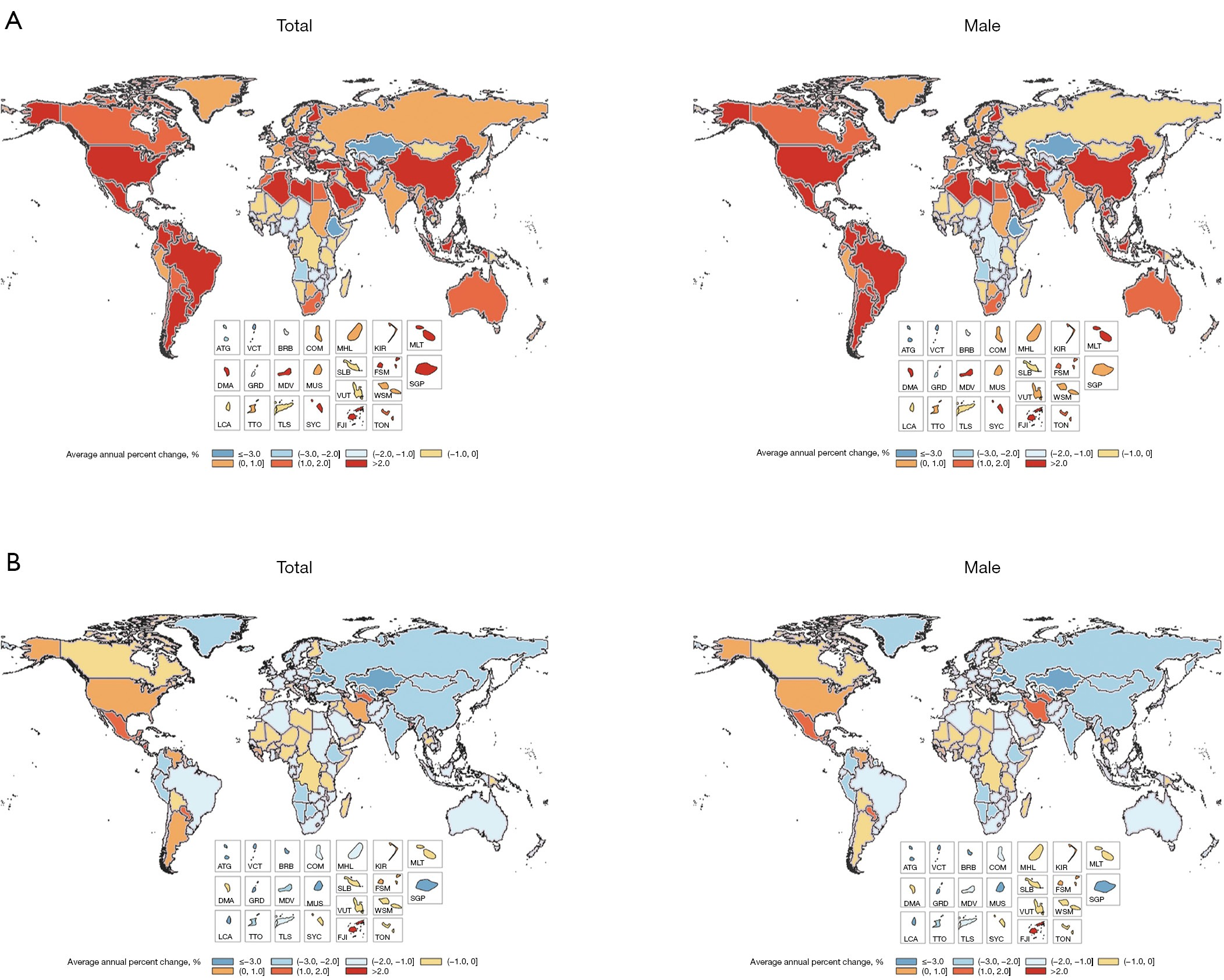 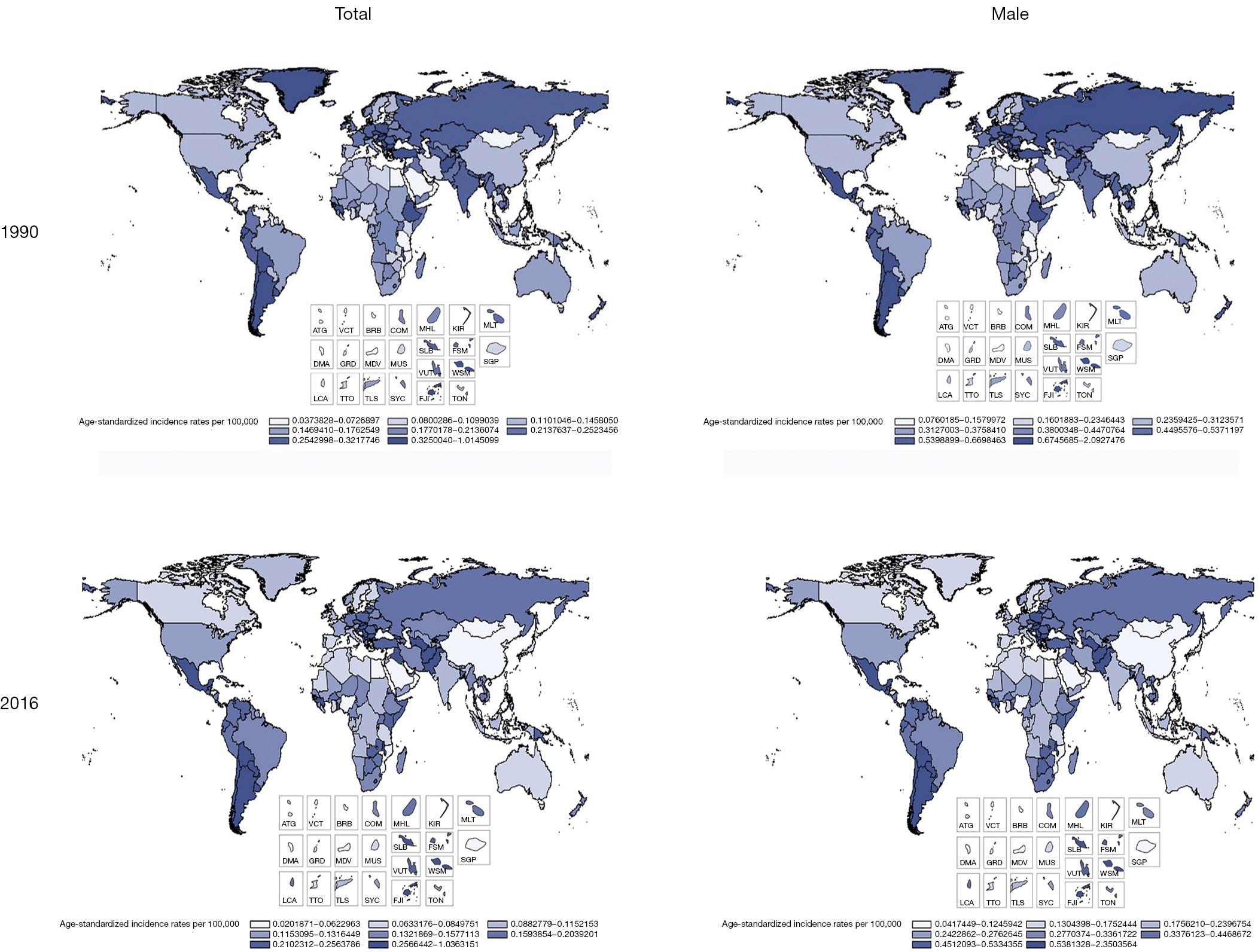 This study also forecasts the trends in the ASIR and ASDR of testicular cancer from 2017 to 2030. At the global level, ASIR will maintain steady growth, while ASDR will fall more sharply. Testicular cancer will most often occur in developed countries by 2030, and at the same time, the incidence will continue to increase in male. From 2017 to 2030, ASIR will rise in most of SDI countries while the low SDI and low-middle SDI countries will be different, where they will remain stable. However, the largest ASDR decrease will occur in high-middle SDI, followed by low SDI, low-middle SDI, and the high SDI, high-middle SDI future trend also remain stable. It should be noted that the changing trend within 95% UI can’t be ignored. Actual changes are likely to fluctuate within this range and may differ from the trends predicted above (Figure 4).

Testicular cancer is the most common cancer in young and middle-aged men. Although curable, illness or treatment or both can impose huge physical, psychological and financial burdens on patients, especially young people. Although the incidence of testicular cancer accounts for only 1% of all cancers, it has received increasing attention due to its severe consequences. However, many prior researches lacked attention to trends in the incidence and mortality rates of testicular. According to literature, this is the first study to systematically analyze the incidence and death rates between 1990 and 2016 by ages, SDI countries, and regions. The testicular cancer incidence trend indicates that from 1990 through 2016, especially in adolescence and young people (<49 years old), the incidence increased significantly. The key reason for the increase in incident cases is the change in incidence rate, followed by population growth and change in age structure. However, with the growth of the economy and the advancement of medical technology, the trend of death worldwide is falling sharply. In this study, Among SDI countries, the largest increase in incident cases was in middle SDI and high SDI countries. Among the regions, incident cases in America and many Europe countries increased commonly from 1990 to 2016. In 2016, there were 66,833 testicular cancer events worldwide. Its incidence may not be enough to cause more concern than other common cancers, but TGCT is the most common solid tumor in men between the ages of 20 and 34. Overall, research related to testicular cancer is insufficient.

It has been reported in previous study that the cancer outcomes are strongly correlated with the health care expenditures, adequate diagnosis and treatment services (20). Generally, developed countries invest more in health and also have more advanced treatment and diagnostic methods. Moreover, with increasing investment in health and advances in medical technology in developing countries, the future trend of ASDR worldwide and in each country is declining. These conjectures explain the above situation well, while it is not easy to explain it perfectly.

The two most influential factors are population growth and changes in age structure during the development of testicular cancer incidence. But, these two reasons contribute differently at different ages, regions and SDI countries. There are many other risk factors for the occurrence of seminoma or nonseminoma in germ cell tumors (GCTs). For example, several environmental risk factors are independently associated with testicular cancer. The most common include cryptorchidism, low birth weight and short gestational age (21). Cryptorchidism can induce ipsilateral and contralateral testicular cancer (22), and Testicular microlithiasis may often coexists with this disease (23). The genetic factors also play a role in testicular cancer, while only 5% of patients diagnosed with this disease are considered to have inherent relation. People whose father has testicular cancer are 4 to 6 times more likely to develop the disease than normal people, and if a brother has this cancer, the risk would become 8 to 10 times (24). Furthermore, Down syndrome, Klinefelter’s syndrome and testicular dysgenesis syndrome are also associated with increased risks of testicular cancer (25-27). In addition, mother’s weight gain during pregnancy, estrogen level, race, birth weight, social life status, education levels, serum cholesterol level and lifestyle are all associated with testicular neoplasms (28-34). Screening has not yet taken place globally, and prevention recommendations are also not enough in all regions.

Testicular cancer mortality may be impacted by multiple factors. For example, the living environment change is an important influencing factor. But the harmful factors are still existence in lifestyles such as tobacco smoking, obesity, hypertension and high fat diet (35). Furthermore, the high body mass index (BMI), sport absence and sedentariness were also considered to increase the mortality in this cancer, while the evidences were insufficient compared to other urologic cancers. However, the most established risk factor remains cryptorchidism. The favorable trends in mortality are largely due to the introduction (since the 1970s) of effective treatments, mainly platinum-derived chemotherapy.

This study shows future trends in testicular cancer. Trends are predicted by statistical methods and professional tools, and the feasibility ensured by analyzing. As mentioned above, the reason for the increasing incidence is likely to be related to the risk factors brought about by social development. However, the reason for the declining mortality rate can still be explained by development of economic and medical technological, but the specific reasons for the small change in the incidence of low SDI and low middle-SDI countries may be related to population size and local customs. To the best of my knowledge, this research is the first to analyze the temporal trends of testicular cancer incidence and mortality from 1990 to 2030. This article analyzes the trends of different subgroups including ages, regions and SDI from 1990 to 2030 by combining existing data and estimated data. The time trends presented the testicular cancer epidemiology and can guide intervention programs and instruct cancer determinants and outcomes research. Trends in cancer incidence will assist with resource allocation as a window into the future, which is essential for health policy, screening guidelines, and resource allocation decisions.

After detailed analysis of temporal trends in collecting and predicting data on future testicular cancer incidence and death rate in 2030, the outcomes show that the global incidence increased significantly in terms of population expansion and age structure changes, but not for multifactor mortality. This has led to serious economic problems in treatment and supportive therapies, and challenges to all segments of society. As the first systematic summary of testicular cancer, this study has a great reference for the designation of testicular cancer prevention and health policies in various regions.

Conflicts of Interest: All authors have completed the ICMJE uniform disclosure form (available at http://dx.doi.org/10.21037/tau.2020.02.22). The authors have no conflicts of interest to declare.