Despite transrectal ultrasound guided systematic prostate biopsy is the standard-of-care in diagnosis of prostate cancer (PCa), it has poor diagnostic accuracy for PCa detection (1). It may fail to detect the presence of cancer due its low sensitivity and specificity (2), so that the false-negative rate may reach 50% (3). Furthermore, 30% of aggressive tumors are usually misdiagnosed (4).

The ability to detect PCa on magnetic resonance imaging (MRI), using different prognostic scores and systems (PI-RADS) has led to the development of three MRI-guided prostate biopsy methods: cognitive fusion biopsy, MRI/ultrasound (MRI/US) fusion-guided biopsy and biopsy performed in gantry in an MRI suite (5). As the first one lacks of precision and depends on the operator’s expertise, and the third one is still expensive at the moment, MRI/US fusion biopsy is being embraced as the new standard technique (6). Nevertheless, there is no consensus for the moment about the optimal protocol of biopsies to perform in PCa initial diagnosis.

The objective of this retrospective study was to report the results of our experience in real life routine practice using the MRI/ultrasound imaging biopsy technique with 6 random cores associated to targeted cores (2 to 3 per lesion), with comparison to the main publications of the literature.

In this retrospective study, we reported our experience of MRI/US fusion biopsy in an academic reference urological center, during a 4 years period from September 2015 to May 2019.

There were no exclusion criteria based on age, PSA, prostate volume, previous history of prostate biopsy. All patients have at least one suspicious lesion on multiparametric MRI (mp-MRI).

Subsequently to fusion biopsy, histological results of radical prostatectomy specimens were also analyzed. An ethical waiver was applicable as the study was a retrospective service evaluation without any change in patient management.

A mp-MRI was performed for all patients, including T2-weighted imaging (T2w), diffusion-weighted imaging (DWI) with apparent diffusion coefficient (ADC) reconstructions, and dynamic contrast enhanced (DCE) imaging. All MRIs data were reviewed by a single referring uro-radiologist (M Lair), and suspicious lesions were scored according to the PI-RADS classification (version 2) (7).

Fusion biopsies were performed with the UroStation™ (Koelis, Grenoble, France). Suspect lesions (PI-RADS ≥3) were previously contoured and recorded by our radiologist (M Lair). All procedures were performed under local anesthesia, by two urologists experienced in PCa. During the procedure, we always realized 2 to 3 targeted biopsies on each suspect lesion associated to a sextant scheme of six random biopsies (one core, bilaterally from each base, mid and apex).

All biopsies and prostatectomy specimens after radical prostatectomy were analyzed by an experienced uro-pathologist (F Gobet). To date, there is always a debate about the definition of significant PCa. Anyway, we considered EAU guidelines definition of a PCa with a Gleason 7 or higher score (1).

Figure 1 Monthly evolution of the number of standard and fusion biopsies during the study. 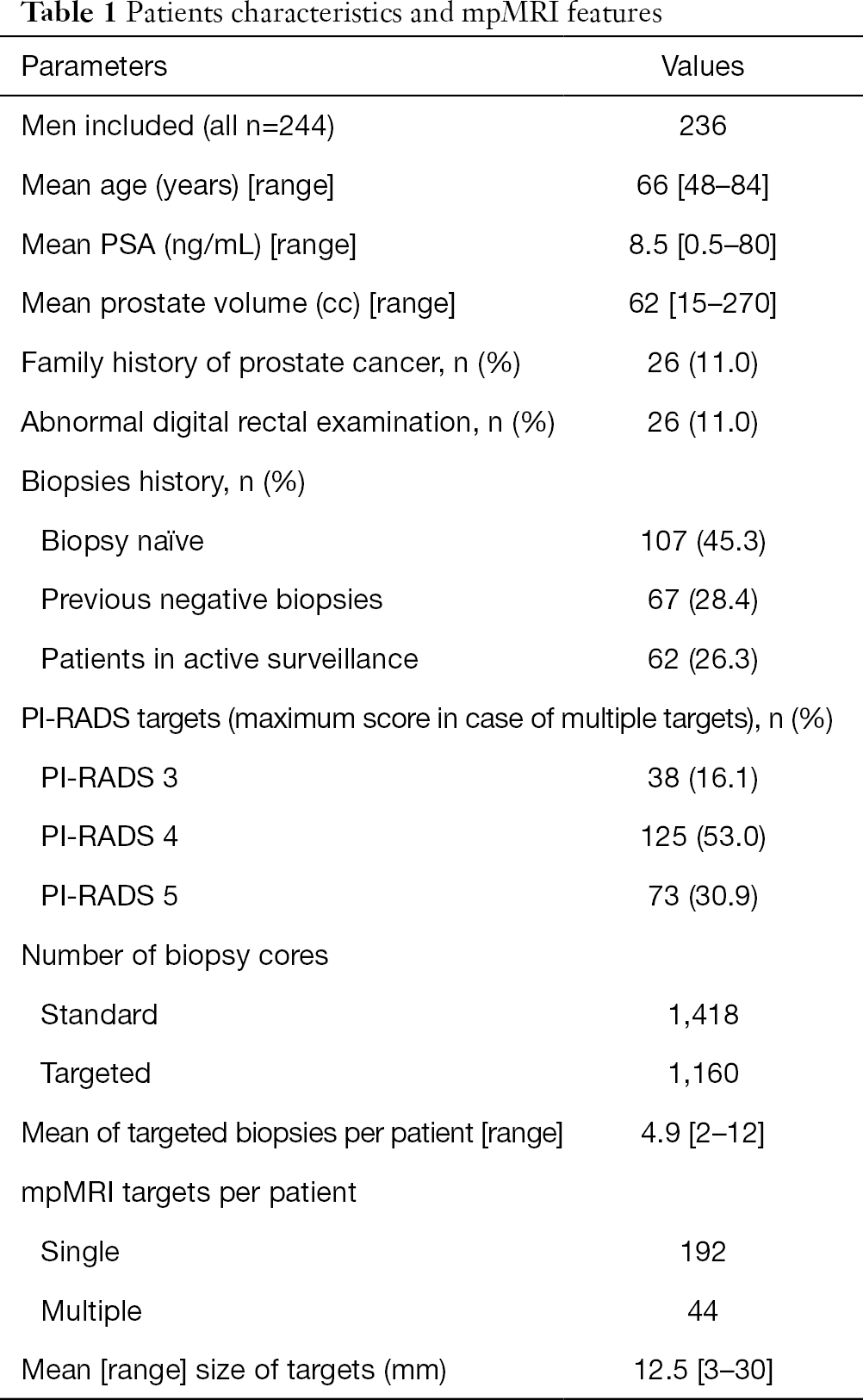 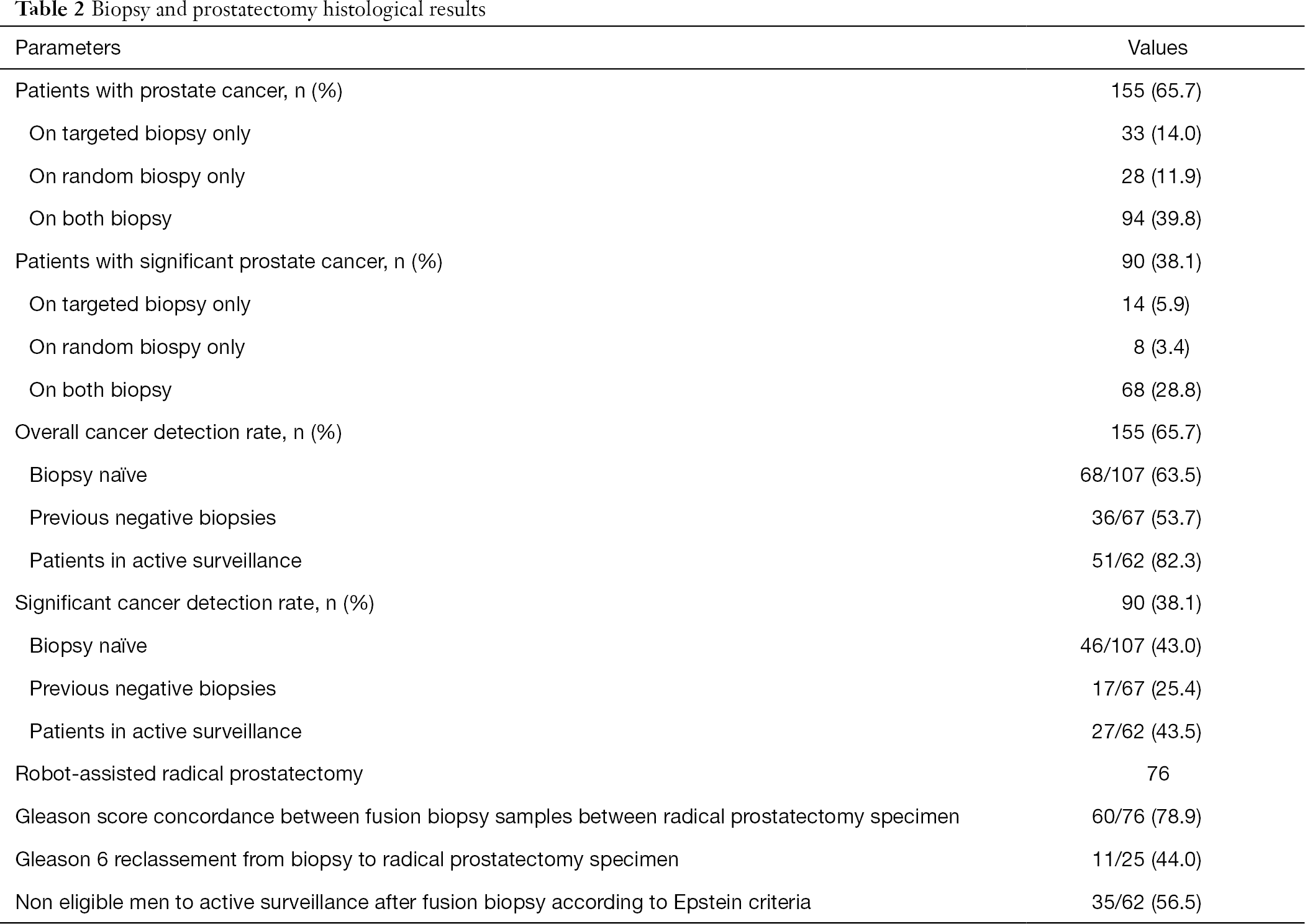 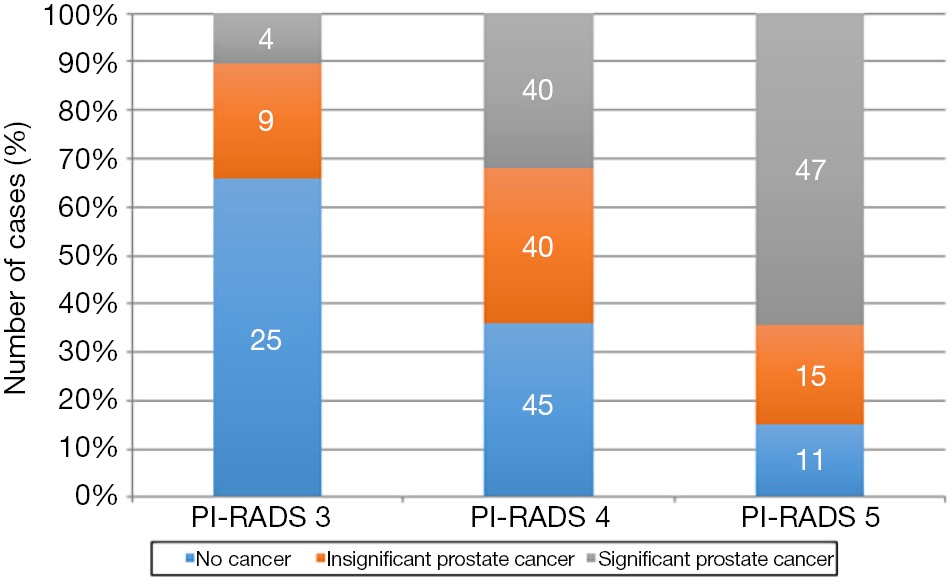 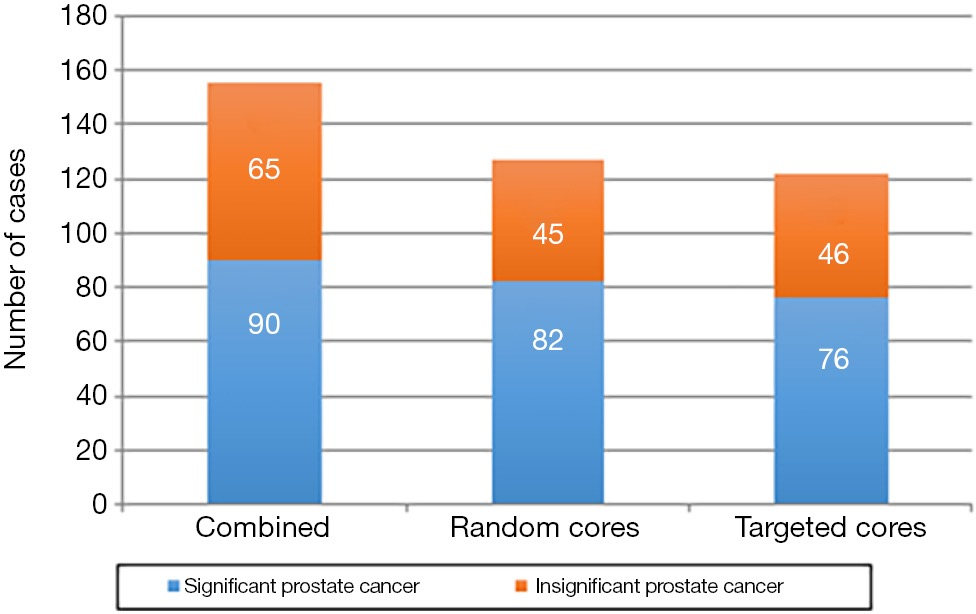 Figure 3 PCa detection according to the combined and separated biopsy.

CDR was widely different depending on the patient history. Therefore, CDR was 63.5% in biopsy naïve patient, 53.7% in patient with previous negative biopsies and 82.3% in patients in active surveillance. When considering significant cancer definition, biopsy naïve and active surveillance groups toward to have similar CDR (42.9% and 43.5% respectively), as patient with previous negative biopsies have lower but none negligible CDR (25.3%).

Among the 62 patients in active surveillance and in consideration with Epstein Criteria, 35 (56.4%) were eligible to an active treatment after undergoing fusion biopsy. Robot-assisted radical prostatectomy was performed in 76 men. Considering the whole Gleason score, concordance between biopsy samples and radical prostatectomy specimens was 80% (Figure 4). The Spearman correlation coefficient showed a very strong and significant positive correlation between the two histological scores (P=0.81, P<0.001). As regarding patients with Gleason 6 on biopsies samples, 44% were upgraded to Gleason 7 or higher on radical prostatectomy specimen.

In our retrospective study, overall CDR was 63.5%, which were slightly higher than other fusion biopsies studies data (8,9). This is probably related to the heterogeneity of the study population with an important group of PCa patients already diagnosed and under active surveillance. In fact, across studies, PCa detection rate was variable and was influenced by patient selection study designs and reporting which made difficult a head-to head comparison.

In the early 2000’s, saturation biopsies were proposed to patients with previous negative biopsies but raising PSA and clinical suspicion for PCa. More recently, the advent of multiparametric MRI permits to identify suspicious prostate lesions with a high accuracy. Different MRI classification scores were validated to objectively grade those suspicious lesions. PI-RADS (version 2) remains today the most used in clinical practice, with the advantage, in plus of its accuracy, to present an overall good inter-observer agreement among radiologists with different levels of experience (10). These radiological data suggest to proposed biopsies targeting directly suspicious lesions, rather than repeated systematic biopsy. As reported by Sonn et al. fusion biopsy provides improved detection of PCa in men with prior negative biopsies with an overall CDR of 34% (11). Anyway, the reported CDR for significant PCa in men with a prior negative biopsy can range between 20 and 40% and is lower compared to detection rate in biopsy-naive patients (12,13).

Different series have evaluated the interest of performing targeted biopsies in primary intention for naïve patients. Mozer et al., in a series of 152 patients with a control arm of conventional echo-guided biopsies, concluded that biopsies targeted with Urostation (Koelis®) have detected a lower number of cancers at all grades (54% vs. 57%), but more lesions clinically significant (43.4% vs. 36.8%) (14). Similar results have been reported by Pokorny et al. with a higher high-risk carcinoma rate in the targeted biopsy group (65.5% vs. 52.1%) (15). Using another software (Virtual Navigator), Delongchamps et al. observed a significantly higher CDR (82.1% vs. 45.8%), with a higher Gleason score 7 rate than in the targeted biopsy group (16). A recent international study, PROMIS, has underlined that performing an initial selection of patients by MRI before any biopsy could potentially avoid the practice of biopsies in 27% of patients, and would guide the subsequent biopsy for patient with suspicious lesions (17). Anyway, these literature data are similar to our retrospective study showing a CDR at biopsy naïve men of 63.5%, clinically significant in 42.9%.

In contrast, in active surveillance the reclassification rate was much lower, ranging from 2.5% for Soloway et al. (18), up to 22% for Berglund et al. (19). Therefore, those findings would indicate mp-MRI and targeted biopsy at initial evaluation during an active surveillance protocol to offer more relevant detection of significant cancers (20). On a series of 113 patients, Hu et al. noted a reclassification rate of 36% according to the Epstein criteria (Gleason score less than 7, invasion of less than 3 cores and/or tumor extent less than 50% per carrot) (21). Using the same criteria, reclassification rate in our study would be 56.4%. Nahar et al. showed that targeted biopsies made 33% of patient ineligible to active surveillance considering Epstein criteria (22). Half of those patients were ineligible because of Gleason upgrading.

Should we systematically combine standard biopsies with targeted biopsies in routine practice? From a morbidity point of view, no series has shown a significant decrease of complications by reducing the number of samples. Nevertheless, the number of samples seems to be correlate with less patient pain. Siddiqui et al. observed the same detection rate for overall prostate carcinoma between standard biopsies and targeted biopsies, but the latter allowed diagnosing 30% of high-risk tumors and 17% fewer tumors low risk (23). Our results are also in concordance with the literature data. Rouvière et al. in the “MRI-First’’ study concluded that significant CDR was improved by combining both techniques and both techniques showed substantial added value (24). In our experience, only 8% of significant cancers were diagnosed on randomized samples. Many studies have reported that the percentage of clinically significant cancer missed by fusion biopsy, but detected by standard biopsy could reach to 10% (23,25). Such data clearly confirm the necessity of combining target and random biopsies.

Concerning surgery outcomes, Velez et al. reported their histological results on patients who had radical prostatectomy after fusion biopsy (29). Gleason scores were unchanged in 71% of cases with a Spearman correlation coefficient of 0.75, which is comparable to our study results. Bloom et al. reported a rate of 44% of upgrade among their 466 Gleason 6 patients (25). In the other hand, some studies concluded that MRI/US biopsy besides their higher significant PCa detection rate comparing to standard biopsy, have also less upgrading of cancers at surgery (30,31).

In conclusion, targeted biopsies led to increase clinically significant CDR, which has been consistently reported across cohort studies despite wide variations in MRI protocols, patient selection and operator technique. In our series, CDR was 63.5% in biopsy naïve patient, 53.7% in patient with previous negative biopsies and 82.3% in patients in active surveillance. Moreover, targeted prostate biopsy is tending to become the gold standard in the management of patients with PCa suspicion. Our study demonstrated in comparison with literature data that a reduced number of random cores could be associated with similar results, suggesting a real change in patient’s management in particular in active surveillance group. Using the Epstein criteria, reclassification rate in our study would be 56.4%.

Conflicts of Interest: All authors have completed the ICMJE uniform disclosure form (available at http://dx.doi.org/10.21037/tau.2020.02.02). The authors have no conflicts of interest to declare.

Ethical Statement: The authors are accountable for all aspects of the work in ensuring that questions related to the accuracy or integrity of any part of the work are appropriately investigated and resolved. An ethical waiver was applicable as the study was a retrospective service evaluation without any change in patient management.