Urologic surgery is undergoing an exciting period of growth, not least because of introduction of the da Vinci surgical system, and clinical application of laparoendoscopic single-site surgery (LESS). According to the literature, LESS is technically feasible and safe for treatment of various urologic diseases, resulting in better cosmetic outcomes, lower postoperative analgesic requirements, and faster convalescence than is available with conventional laparoscopy (1,2). Nevertheless, the initial da Vinci system (Intuitive Surgical Inc, Sunnyvale, CA, USA) was not designed for use in single-site surgery. Intuitive Surgical Inc. developed a novel set of single-site instruments and accessories specifically designed for single-site surgery in an attempt to overcome the current limitations (3,4). LESS has logically evolved to robot-assisted-LESS (R-LESS) because of the benefits of automatic re-association of the surgeon’s hands with the instrument, ergonomics and 3D vision. Therefore, R-LESS procedures have become more common recently.

By contrast with the recent decline in the use of LESS (5), robotic-assistance appears to improve ergonomics, therefore initiating a new era for LESS. However, the initial da Vinci platform was not specifically designed for this purpose. The introduction of the novel da Vinci single-site platform and its use in urology has been previously reported (6,7). Several centers reported their techniques and initial outcomes for R-LESS partial nephrectomy (2,8). However, there have been no reports of retroperitoneal approaches using the da Vinci Xi surgical system.

A 66-year-old woman was diagnosed with a 4.5-cm lateral renal mass located in the left mid-pole kidney (Figure 1A). The da Vinci Xi surgical system (Intuitive Surgical, Sunnyvale, CA, USA) was used to perform R-SSRPN. Patient has provided informed consent for publication of this case. 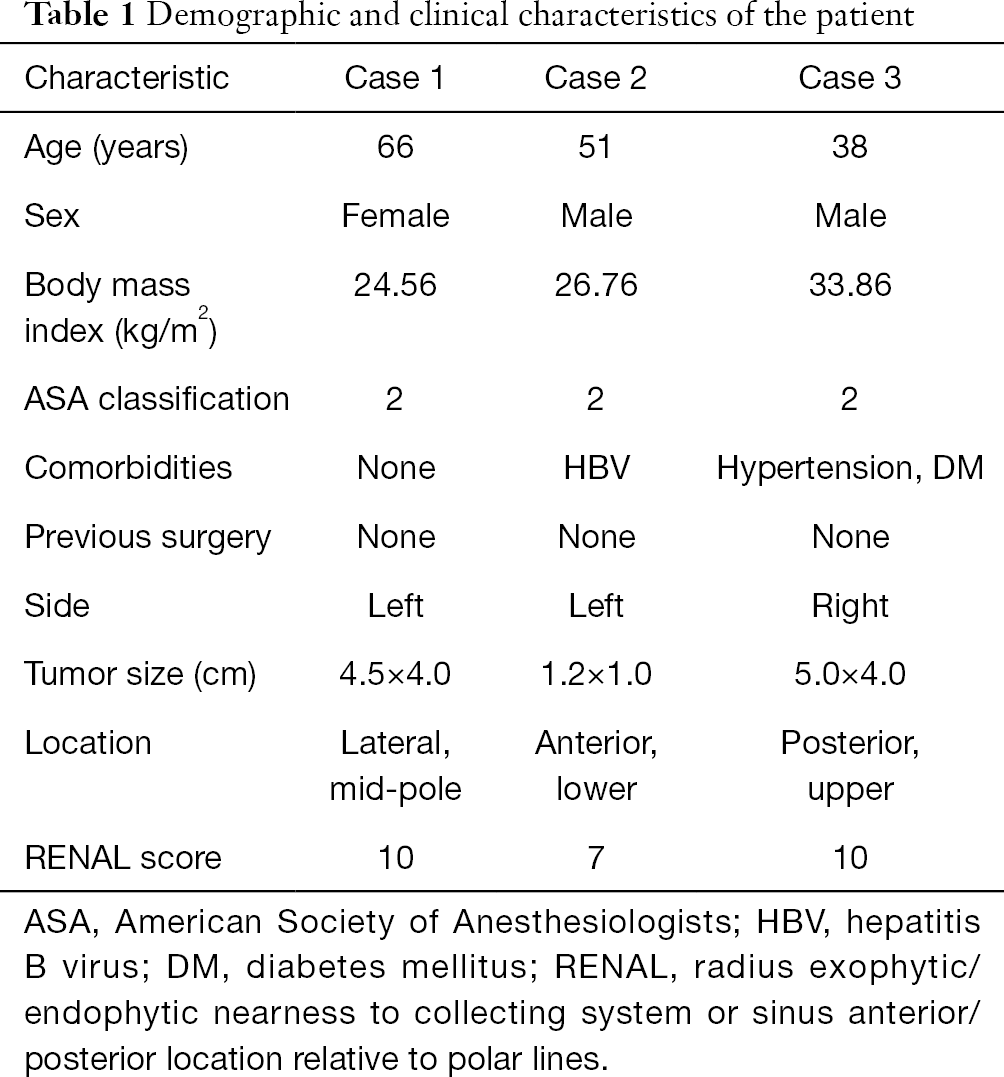 Table 1 Demographic and clinical characteristics of the patient
Full table 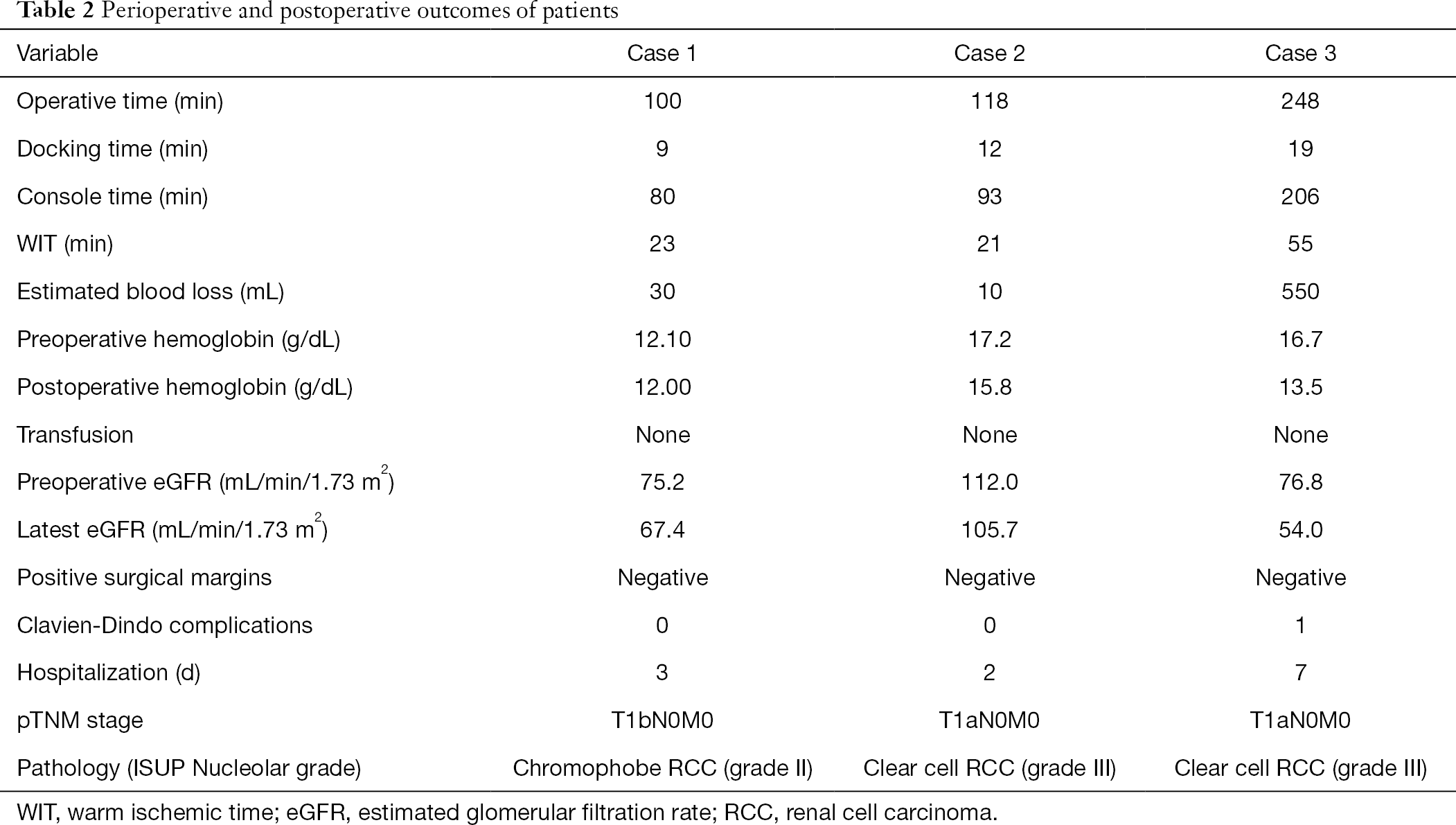 The patient was placed in the full lateral position and the table was fully flexed to increase the space between the 12th rib and iliac crest. This provides full access to the retroperitoneal space, and exposure of the whole abdomen in case of possible conversion to a transperitoneal approach. The spine and hip should be in a straight line, and the spine was fully exposed to allow space for the lateral robotic arm. Elbows should be placed forwards, so that the robotic arms do not collide with the patient’s arms. To identify placement of the single site port, the iliac crest, ribs and axillary lines have been marked. If the camera port is too close to the 12th rib, this may cause the robotic instruments to be too close to the kidney. For the single-site retroperitoneal approach, the incision was 3 cm, which two fingers above the iliac crest just lateral to the triangle of Petit (Figure 2A). The external oblique muscle was separated using retractors to expose the lumbo-dorsal fascia (Figure 2B). A Kelly forceps was used to enter the retroperitoneal space. An index finger was then inserted into this space. The surgeon felt the tip of the 12th rib and the psoas muscle. A PDB balloon dilator (Tyco, Princeton, NJ, USA) was placed into the retroperitoneal space (Figures 2C,3A). Full dilation of retroperitoneal space was made allowing for the insertion of the Alexis retractor component of the “Lapsingle Vision” advanced access platform (Sejong Med, Paju, Korea) with four channels (Figure 3B). The channels were highly elastic. Therefore, the devices of various sizes ranging from 3 to 15 mm were applied. The 12 o’clock channel for the laparoscopic camera was placed toward the kidney. The remained two channels (3, 9 o’clock) were used for the working instruments, and the camera channel with the working instruments were positioned in a triangular fashion. The 0° 8.5-mm da Vinci stereo-laparoscope was connected to the robotic camera system and then the patient cart was positioned at the patient's posterior side cart and docked in a direction compatible with longitudinal axis of the kidney as anteroposterior configuration. Then, the two 5-mm curved cannulas were inserted into the docked robotic arms, and the semi-rigid instruments were loaded. Flexible robotic instruments (a monopolar hook and fenestrated bipolar forceps) were inserted through the curved cannulas (Figure 3C,D). The da Vinci system software automatically re-associates the surgeon’s hands with the instrument tips after docking, so that the left hand of the surgeon controls the right arm of the robot, and vice versa. Inside the retroperitoneal space, ureteral peristalsis was identified (Figure 4A). The renal hilum was isolated and prepared for clamping (Figure 4B). Defatting of the kidney was performed, the renal lesion was identified, and tumor boundaries were confirmed. The resection margin was scored with monopolar cautery using the robotic hook (Figure 4C). Clamping of the renal artery was obtained using bulldog clamps (Aesculap, Tuttlingen, Germany) (Figure 4D). Tumor enucleation/resection was performed by combining blunt and sharp dissection (Figure 4E). Renorrhaphy was performed in a double layer, reproducing the “sliding-clip” technique (Figure 4F) (9). During the renorrhaphy phase, bed suturing of the tumor resection site was conducted with a continuous running suture, using about 15 cm of 3-0 V-Loc (Covidien, Dublin, Ireland) barbed suture material. The outer layer was repaired using one running 2-0 V-Loc sutures. Once the renorrhaphy was completed, the hilar occlusion bulldog clamps were removed (Video 1, surgical video of case 1).

Figure 2 Retroperitoneal space creation. (A) The incision was 3 cm, which was two fingers above the iliac crest just lateral to the triangle of Petit; (B) the external oblique muscle was separated using retractors to expose the lumbo-dorsal fascia; (C) a PDB balloon dilator (Tyco, Princeton, NJ, USA) was placed into the retroperitoneal space. 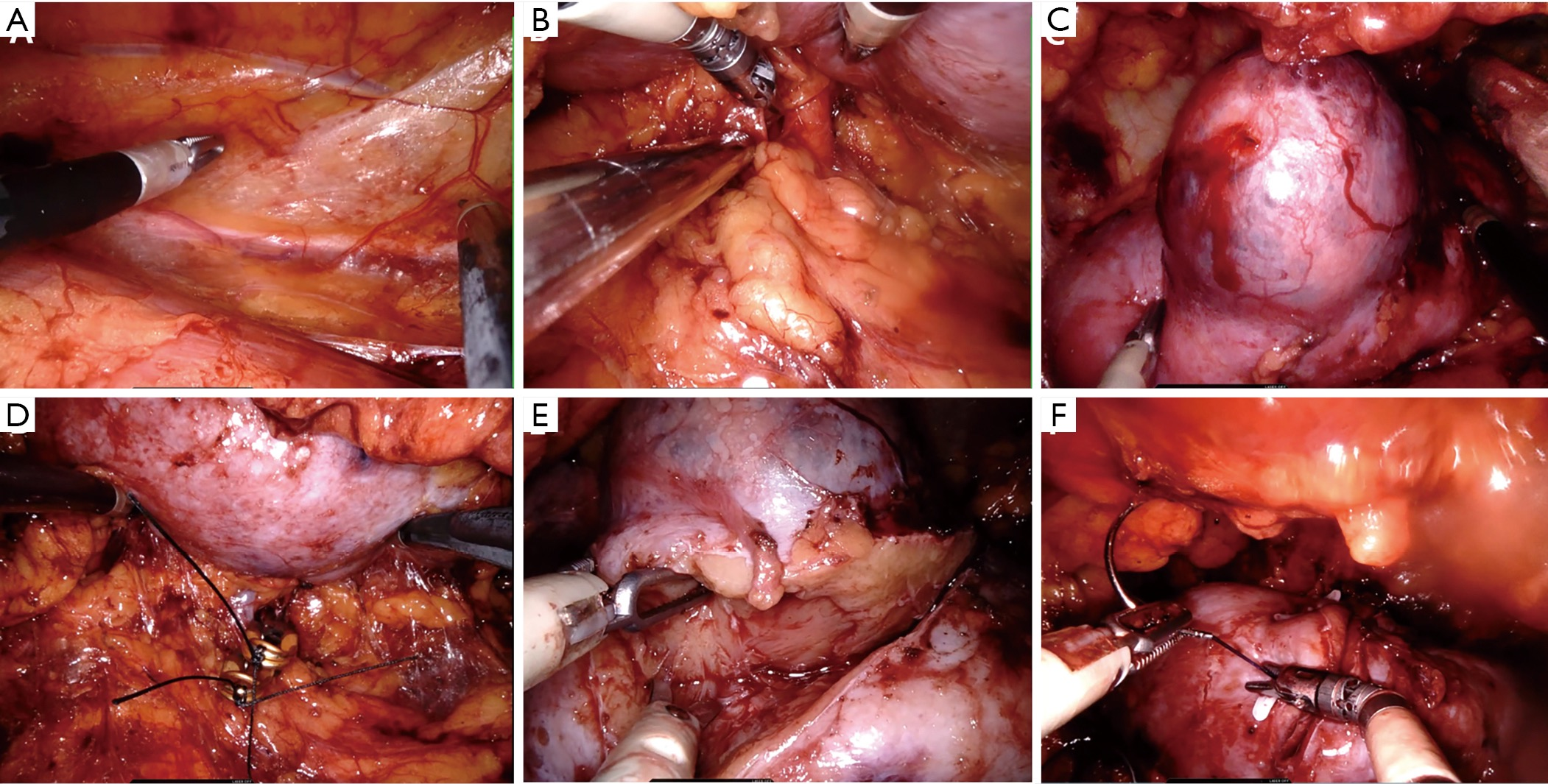 Figure 4 The step by step surgical procedure of retroperitoneal single-site robot-assisted partial nephrectomy. (A) Retroperitoneal anatomic relationships. The robotic scope is rotated for the psoas muscle in horizontal position. The ureter peristalsis is identified after balloon dissection of the retroperitoneum; (B) arterial pulsations are helpful to identify the renal artery, which is skeletonized in anticipation of hilar vascular control; (C) planning the excision margins by allowing accurate identification of the location, depth, and borders of the tumor; (D) hilar clamping can be performed using laparoscopic bulldog clamps; (E) the tumor is resected along the previously scored margin using cold scissors; (F) renorrhaphy is performed in two layers using robotic needle-drivers.

Robot-assisted, multiport, partial nephrectomy is a minimally invasive technique that has been accepted worldwide for the treatment of small and medium-sized renal masses (9). With increasing experience of robotic surgeries, there has been a dramatic increase in the adoption of LESS in urology, because LESS achieves cosmetic outcomes superior to those of the multiport technique (10-12). Nevertheless, the initial trial of R-LESS partial nephrectomy technique was challenging and the advantages of this procedure had not been clearly demonstrated. Therefore, the single-site robotic platforms have been developed to address these challenges (13). In 2010, Intuitive Surgical Inc. addressed the problem of instrument collision by developing the da Vinci single-site surgical platform, using a novel set of single-site instruments and accessories specifically dedicated for robot-assisted single-site surgery. With this instrumentation, extracorporeal robotic arm clashing is minimized externally owing to the curved cannulas that angle the robotic arms far away from one another. Internal collision with the camera was avoided because the camera was designed to be placed in the middle of the curved cannula. Compared to multiport robotic system, the R-LESS system lacked various instruments, and there is no Endowrist technology in the R-LESS platform. Nevertheless, the technical advantages of the robotic platform made R-LESS more feasible than the conventional laparoscopic platform. This novel set of single-site instruments and accessories is specifically dedicated to R-LESS to overcome the current limitations. However, the assistant port had limited size and limitation of motion range. The docking is simpler, guided by a boom-mounted architecture with laser. Nevertheless, until now, there had been no cases of retroperitoneal approach single-site partial nephrectomy performed using the Xi platform surgical system. Although the retroperitoneal approach was first described by Gaur et al. in 1993 (14), there has been relatively less utilization compared with transperitoneal approaches. This could be caused by larger working space and more familiar anatomic landmarks afforded by transperitoneal approach. The retroperitoneal approach is limited by a smaller working space, and the absence of anatomic landmarks which may disorient the surgeon and create the risk of inadvertent vascular injury requiring open conversion (15). Also, using a retroperitoneal approach might be more challenging, because of creation of the retroperitoneal space is a critical step and has to be performed carefully to avoid injury to the peritoneum. If peritoneum damage occurs during the process of making the retroperitoneal space, surgery can become very difficult. Furthermore, it is burdensome to make the retroperitoneal space and might require multiport RPN. However, the advantage of retroperitoneal approach is that access to the renal hilum is quick and relatively easy compared to transperitoneal approach. Often, the renal artery is encountered first. As a result, renal hilum dissection is completed faster. Because of the advantage of fast renal hilum access, the retroperitoneal approach might translate into shorter operation time.

In this report, we demonstrated the feasibility and effectiveness of pure single-site retroperitoneal RPN by da Vinci Xi robotic system using the specifically designed single-site platform for R-LESS. We had used “Lapsingle Vision” (Sejong Med, Paju, Korea) in combination with wound protectors through which robotic instruments were successfully placed instead of Intuitive robotic multichannel port (Intuitive Surgical, Sunnyvale, CA, USA). The first multichannel port (Intuitive Surgical, Sunnyvale, CA, USA) for single-site robot platform could not handle an assist port over 8 mm. This issue with additional assist port over 10 mm meant R-LESS was not a “pure” single-site surgery. Nevertheless, the modified port made by “Lapsingle Vision” could achieve pure single-site surgery.

Even if the feasibility and safety of R-SSRPN, there are several limitations of this technique.

In the cases of upper pole renal mass or with high BMI patient, this technique has difficulty to proceed on surgery due to restricted retroperitoneal space and difficulty of using flexible instruments. Therefore, careful patient selection is mandatory to perform R-SSRPN.

In conclusion, this initial case series with R-SSRPN by da Vinci Xi surgical system using Lapsingle Vision demonstrated that it is safe and effective treatment modality except for upper pole renal mass with high BMI patient. Further studies are needed to validate our results.

Conflicts of Interest: All authors have completed the ICMJE uniform disclosure form (available at http://dx.doi.org/10.21037/tau.2020.01.14). KHR serves as an unpaid editorial board member of Translational Andrology and Urology from Jun 2019 to May 2021. The other authors have no conflicts of interest to declare.

Ethical Statement: The authors are accountable for all aspects of the work in ensuring that questions related to the accuracy or integrity of any part of the work are appropriately investigated and resolved. Written informed consent was obtained from the patients for publication of this case report and accompanying images.