Penile carcinoma (PC), a rare malignancy, accounts for less than 0.1% of all male neoplasms in the developed countries. In 2019, for example, about 2,000 cases of PC were diagnosed in America (1). However, this incidence rises to 10–20% in some developing countries, such as Brazil and Uganda (2).The presence and extent of lymph node metastasis (LNM) were the high-value prognostic factors for PC (3). Clinically positive lymph node (LN) is a significant indictor for LNM, and 40–70% of the patients with positive LNs develop metastatic lymphadenopathy finally. The enlarged LNs in other cases are often benign because of the local inflammatory changes (4-6). Nowadays, radical inguinal lymph node dissection (ILND) is the most optimal method for identifying the aetiology of enlarged inguinal lymph nodes (ILNs) and the metastatic potential of the remaining non-enlarged nodes (3). But for patients with clinically positive nodes, an alternative procedure is fine needle aspiration cytology (FNAC) under the guidance of ultrasound (US) (6). Even though, about 30–50% of patients with palpable ILNs were overtreatment based on guidelines for treatments of PC patients with palpable nodes (4,7). Apart from this, approximately 40–70% of patients treated by radical ILND suffer from surgery-aroused complications, either minor (65.7%) or major complications (34.3%) (7).

According to European Association of Urology (EAU) and National Comprehensive Cancer Network (NCCN) guidelines on penile cancer, when two or more positive ILNs or one node with extranodal extension (ENE) are found on one side, pelvic lymph node dissection (PLND) can be considered and performed during or after ILND according to the intraoperative frozen section results or the pathologic results of ILND-collected nodes (3,8). However, this procedure is expensive and consumes too much time and money in waiting for the results of intraoperative frozen section or reoperation. Therefore, we developed two nomograms to predict the presence of inguinal lymph nodes metastasis (ILNM) and two or more positive ILNs or one node with ENE in one side.

This retrospective study included 236 patients with penile squamous cell carcinoma (PSCC), who were treated in our centre between January 2010 and March 2019. Criteria of eligibility: (I) clinically positive ILNs were present in patients; (II) enhanced computed tomography (CT) or enhanced magnetic resonance imaging (MRI) had been used to evaluate the ILNs of PC patients before surgery in our centre; (III) patients had undergone ILND and their dissected lymph nodes had been pathologically staged when the primary lesion was removed. This study was approved by ethics committee of the First Affiliated Hospital of Nanjing Medical University.

Original imaging results of patients before surgery were retrieved. All ILNs ≥3 mm in size were counted totally in bilateral inguinal regions. ILNs less than 3 mm were excluded because they were likely derived from vascular structures or other nonspecific soft tissues. In addition, the short diameter (SD) of the largest ILN was measured. The internal heterogeneity and border morphology of the largest ILN were examined.

SPSS 23.0 (IBM, Armonk, New York, USA) and R version 3.6.0 (The R Foundation for Statistical Computing, Vienna, Austria) were applied for statistical analyses and graphics. Continuous measurements about clinical features were represented as mean (range). Student’s T test, Mann-Whitney U and χ2 test were conducted for continuous, ordered categorical and categorical variables respectively. A binary logistic regression model was constructed to evaluate the risk factors for the presence of ILNM and two or more positive ILNs or one node with ENE in one side. Nomograms were developed based on the results of multivariate logistic regression analysis. Receiver operating characteristic curve (ROC) was used to graphically show the predictive accuracy of the models, which was quantified by the areas under the curves (AUC). The two nomograms were caliberated and internally validated by performing bootstraps with 1,000 resamples. Calibration curves were plotted to evaluated the calibration of the models. P value less than 0.05 was considered significant.

Nomogram for the presence of ILNM 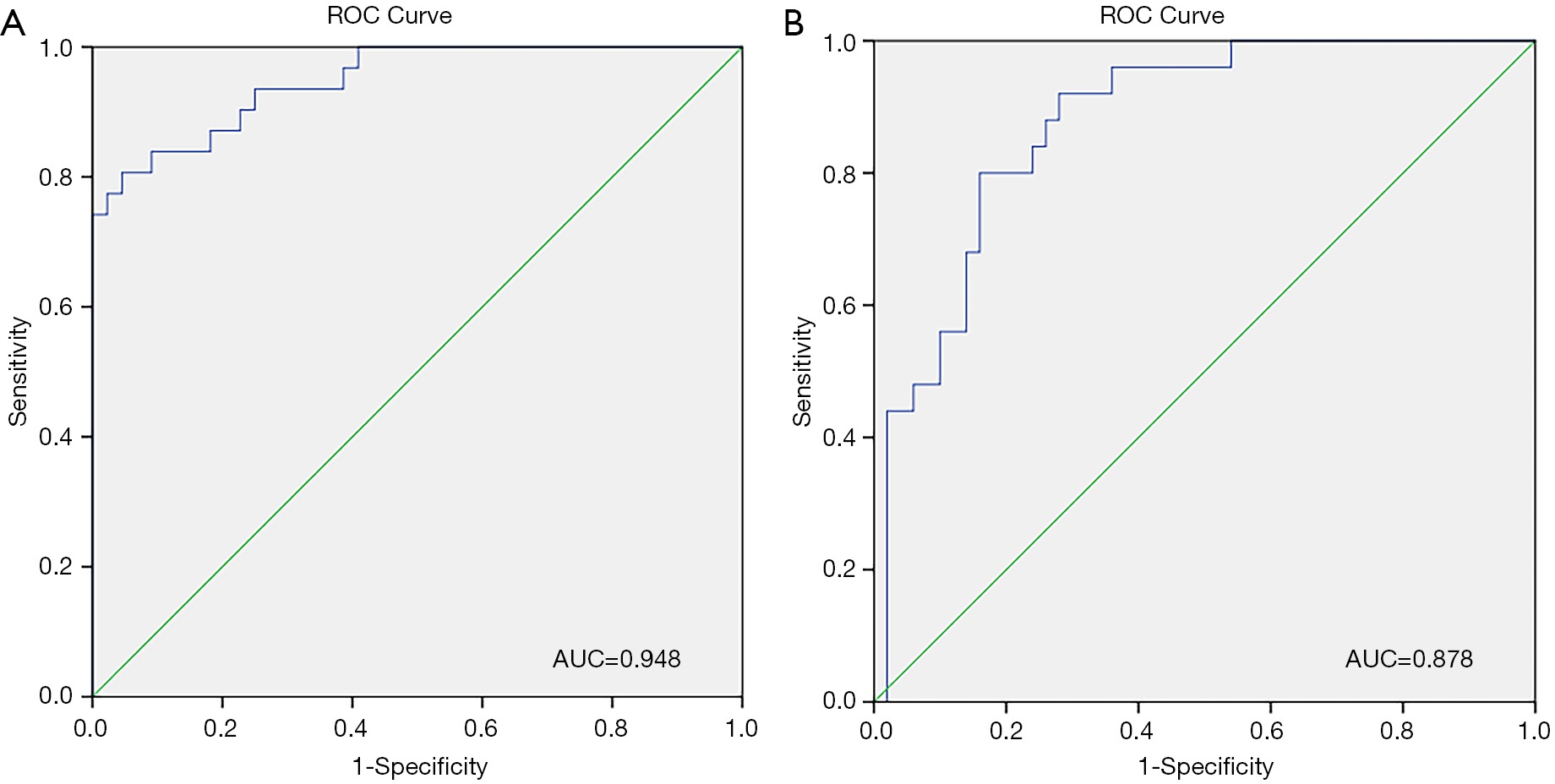 Figure 2 ROC curve demonstrating diagnostic performance of nomograms. (A) ROC for the nomogram predicting the presence of ILNM; (B) ROC for the nomogram predicting two or more histologically positive ILNs or one ILN with ENE on one side. ROC, receiver operating characteristic curve; AUC, area under the curve; ILNM, inguinal lymph node metastasis; ILN, inguinal lymph node; ENE, extranodal extension.

Radical ILND can bring satisfactory outcome to 80% of the patients with low-volume histologically positive ILNs (10). However, approximately 40–70% of patients still suffer from surgery-related complications, like skin necrosis (in 7–61%), wound infection (in 7–40%), seroma (in 5–30%), lymphocele (in 2–10%), and lymphedema (in 18–38%) (7). Among them, the incidence of wound infections has shown a declining trend, but others still remain at a high level (11). As for minimally invasive surgery for ILND, a lower complication rate of about 30%, but ILND-caused lymphocele reaches 12–27%, higher than that of open ILND (12,13). FNAC under the guidance of US can detect tumor in palpable nodes accurately, rapidly and easily (3,6). But, its results are useable only when biopsy is pathologically positive and false‐negative rate was reportedly up to 15% (14,15). Repetition of FNAC or surgical staging is necessary, once biopsy is tumor negative. Clinically positive nodes exist in 28–64% of PC patients (16). Approximately 30–60% of PC patients with palpable ILNs do not experience ILNM (4-6), consistent with our results that 58.7% of the cases were ILNs histologically negative. So, we need to develop nomograms for choosing more appropriate clinically node positive PC patients for invasive node staging.

Our nomograms suggested that tumor grade and LVI were associated with ILNM in PC patients with clinically positive nodes, which is supported by the researches of Peak et al. (17) and Bhagat et al. (18). Large size, round or irregular shape, heterogeneous signal and irregular border of the nodes were also associated with the tumor metastasis in LNs (19,20). Therefore, we incorporated the imaging parameters of the largest ILN into the nomogram. Our multivariate logistic regression analysis showed that only SD of the largest ILN was an independent risk factor of ILNM, which is supported by the study of Tang et al. (19). Merely imaging examination by CT or MRI cannot detect tumor metastasis in palpable ILNs accurately, but imaging parameters combined with pathologic findings of primary tumor can predict ILNM more accurately. Compared with nomograms developed by Ficarra et al. (21), Peak et al. (17) and Bhagat et al. (18), ours is more specific to predict ILNs in PC patients with clinically positive ILNs, as shown by the bootstrapping-corrected concordance index (ours’ 0.948 vs. others’ 0.876, 0.880 and 0.74).

Additionally, the rate of pelvic lymph node metastasis (PLNM) is 23% in patients with more than two histologically positive ILNs and 56% in those with more than three histologically positive ILNs, or one ILN with ENE. Ipsilateral PLND is recommended and can be performed during ILND when two or more positive ILNs or one ILN with ENE were diagnosed within intraoperative frozen section or later according to the pathologic results of ILND (3). The total number of ILNs collected through radical ILND is frequently more than 10 (11), so the frozen section preparation often prolongs the operating time. If PLND is preformed based on pathologic results of ILND, the patients always need reoperation and months for recovery. Our nomogram showed that tumor grade, LVI and SD of the largest ILN were the independent risk factors, with a bootstrapping-corrected concordance of 0.878. This nomogram can be applied to improve decision-making and to support treatment plans that PLND can be simultaneously performed during ILND, avoiding time wasting on waiting for the results of intraoperative frozen section and reoperation after ILND.

Some limitations exist in our study. The patients were collected from a single medical center. External validation is required. Furthermore, other pathological characteristics, such perineural invasion and pattern of invasion, were not analyzed, which may improve the bootstrapping-corrected concordance index of our nomograms if they were included. Nevertheless, this is an important first time in generating predictive nomograms for the presence of ILNM and two or more histologically positive ILNs or one ILN with ENE in patients with clinically positive ILNs.

Funding: This work was supported by the Research Project of Jiangsu Provincial Commission of Health and Family Planning Commission (grant number Z201601).

Conflicts of Interest: All authors have completed the ICMJE uniform disclosure form (available at http://dx.doi.org/10.21037/tau.2020.01.32). The authors have no conflicts of interest to declare.

Ethical Statement: The authors are accountable for all aspects of the work in ensuring that questions related to the accuracy or integrity of any part of the work are appropriately investigated and resolved. This study was approved by ethics committee of the First Affiliated Hospital of Nanjing Medical University (approval number: 2020-SR-005).