Pre-treatment estradiol does not predict testosterone response to clomiphene citrate

Clomiphene citrate (CC) revolutionized the practice of female infertility following its introduction over 40 years ago (1). Its mild side-effect profile and efficacy made it a popular first-line therapy for ovulation induction (1). CC has also gained popularity as an off-label treatment for male infertility, showing the ability to improve semen parameters by increasing intratesticular testosterone (T) levels (2,3). More recently CC has come into favor as a treatment option for men with symptoms of hypogonadism and low T who wish to maintain their reproductive potential (2,4). Exogenous T is a known contraceptive for men5. Exogenous T provides negative feedback to the hypothalamus which ultimately causes decreased follicle-stimulating hormone (FSH) and luteinizing hormone (LH) release from the pituitary, leading to impaired spermatogenesis (5). Estradiol (E) provides similar negative feedback to the hypothalamus leading to decreased gonadotropin release, low T, and impaired spermatogenesis (6).

CC is a selective-estrogen receptor modulator (SERM), which acts as both an estrogen receptor agonist and antagonist at different target tissues in the body (7). CC is primarily an estrogen receptor antagonist at the hypothalamus and pituitary, thus preventing the negative feedback exerted by E on these sites (8). Blockade of this negative feedback stimulates gonadotropin release from the pituitary which promotes spermatogenesis and endogenous T production in the testis through stimulation of Sertoli and Leydig cells. Via this mechanism, CC is able to treat the symptoms of hypogonadism and low T in men while preserving or improving semen parameters (9,10).

CC dosing for both men and women has historically been an empiric endeavor. In women, approximately half will ovulate on a 50 mg CC regimen administered orally for five consecutive days, beginning on the second to fifth day after the onset of spontaneous or progestin-induced menses (1). The remaining 50% require dose optimization, and there are no laboratory or clinical parameters that predict the dose necessary to achieve ovulation (11). Of note, there is no benefit to increasing the CC dose beyond that which yields ovulation (1).

The logic of male dosing for CC is empiric and somewhat similar to that of women, with typical starting doses of 25 mg orally every other day (12). Every other day dosing is preferred to daily dosing for CC given the tachyphylaxis phenomenon associated with the drug. Recent literature has shown that increases in T range from 200 to 300 ng/dL with CC therapy (13). While CC is well established as a treatment for hypogonadism in men, not all hypogonadal patients have clinically meaningful responses to the medication. Furthermore, data is somewhat limited in identifying predictors of who may derive the greatest benefit from CC. Given that CC blocks estrogen receptors in the hypothalamus and pituitary, we hypothesized that men with higher serum E levels prior to initiation of CC treatment will have a greater post-treatment T elevation.

Following IRB approval, retrospective chart review was performed for all men prescribed CC (25 mg every other day) between January 1, 2015 and December 31, 2018 both by Urologists and Endocrinologists at two tertiary academic centers. Age, body mass index (BMI), and prescription date were recorded for all patients. Pre- and post-treatment E, total testosterone (TT), FSH, and LH levels were recorded for all patients as well. The liquid chromatography/mass spectrometry (LC/MS) assay was used for all TT measurements and all labs were drawn before ten o’clock in the morning. Only men with pretreatment TT <300 ng/dL were included in the analysis. Men who were simultaneously prescribed any other treatment for low T were excluded (exogenous T, anastrozole, human chorionic gonadotropin) as were men with pituitary hypofunction. Pre-treatment hormone measurement was defined as the last recorded hormone measurement prior to initiation of CC and post-treatment hormone measurement was defined as the first recorded hormone measurement following initiation of CC. Using SPSS version 24, mean and standard deviation (± SD) or median an interquartile range [25–75] was reported as required. Univariate linear regression analysis was used to determinate the unstandardized regression coefficient (B) with the 95% confidence interval and the coefficient of determination (R2). Regression analysis considered percent change in TT following CC treatment as the dependent variable and pre-treatment E level and other variables such as age, BMI, FSH, and LH as independent variables. Multivariable regression analysis was also performed adjusting for the effect of age for the association between percent change in TT and each variable included in the univariate analysis. The Wilcoxon signed-rank test was utilized to compare pre and post-treatment hormone levels. For the purpose of this research a P<0.05 was considered statistically significant. 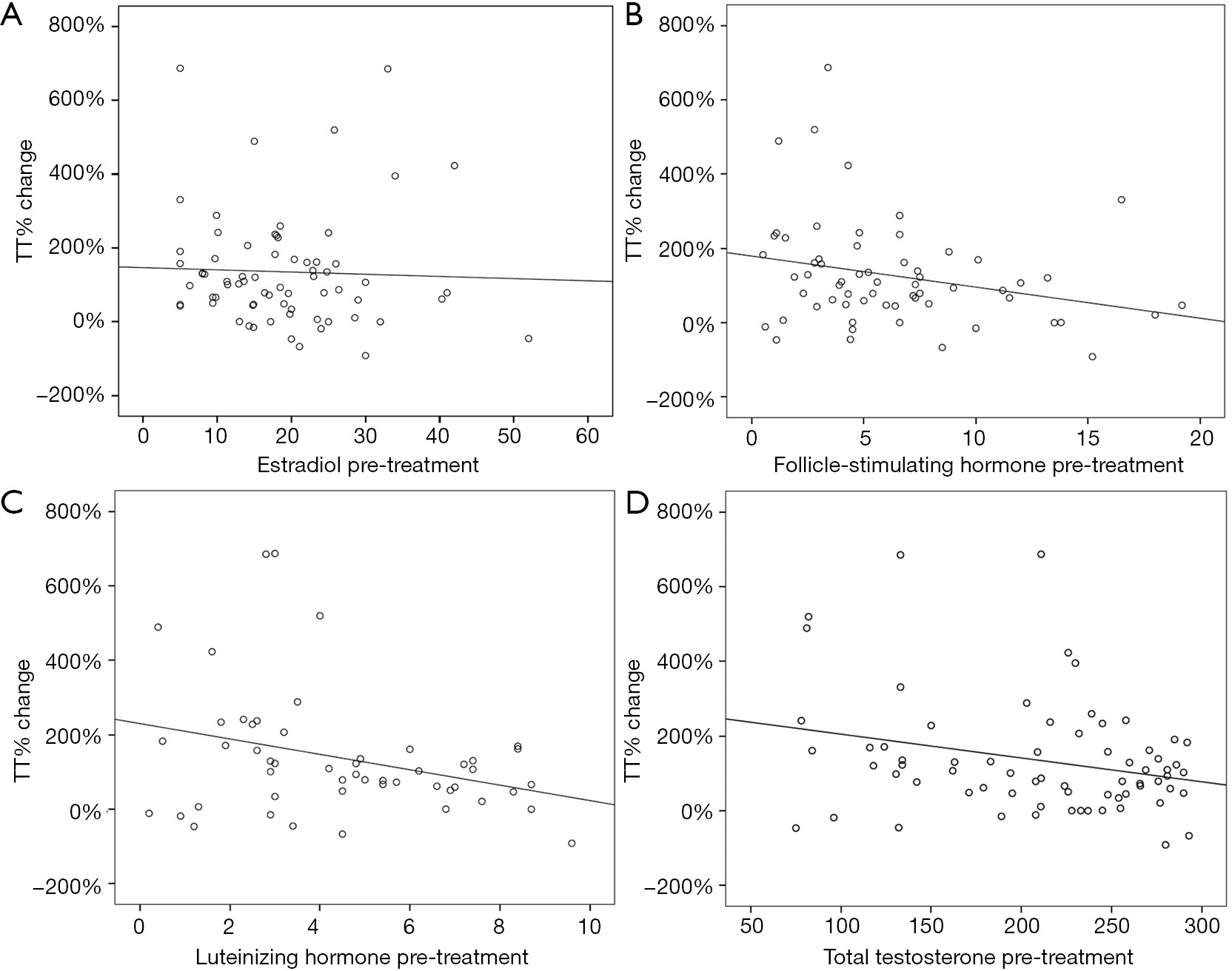 CC is a SERM historically used for the induction of IVF cycles in the field of female infertility that has also been used as a treatment option for men with low T and secondary hypogonadism who wish to preserve or improve their reproductive potential. Choosing the appropriate dose of CC for both women and men is typically empiric, requiring a titration period to find the optimal dose. The present retrospective chart review was conducted in order to determine if baseline E levels will predict TT response in men, given that CC functions by downregulating the inhibitory effect of E on the male hypothalamus and pituitary. To our knowledge there are no other studies that have specifically examined this relationship.

We found that in our study population, pretreatment E level in fact does not predict a greater TT response to treatment with CC. This result is consistent with prior investigations into predictors of response to CC treatment, finding no clear predictive laboratory study (11). We did however find that higher pre-treatment gonadotropin levels (LH and FSH) significantly predicted lower TT response. This relationship makes logical sense; higher pre-treatment gonadotropins indicate less baseline inhibition of the hypothalamus and pituitary, and therefore milder TT response when this inhibition is removed. In a 2014 prospective investigation into predictors of biochemical response to CC, Mazzola et al. found decreased LH to predict response to CC, both as a continuous variable and for LH ≤6 mIU/mL (14). The authors did not include E among potential predictors of response. Conversely it is also possible the men in our population also have an element of primary hypogonadism, such that additional promotion of gonadotropin signaling cannot produce additional T production from hypofunctioning Leydig cells. These findings perhaps suggest that men with higher baseline gonadotropin level may not benefit from CC treatment as greatly as those with lower baseline gonadotropins.

We also found pre-treatment age to be associated with a lower TT response after treatment. While our patient population is relatively young (mean age 35.4±5), there is evidence to suggest that T levels begin to decline in the third decade of life (15). T levels decline with age as the Leydig cell steroidogenic response to LH declines over time (16). Even with the restoration of gonadotropin signaling by CC, the TT response in our population declined in an age-dependent manner. This finding suggests that men in their forties, based on our study population, should perhaps be offered alternative treatment modalities such as aromatase inhibitors or human-chorionic gonadotropin if they desire to maintain fertility, or exogenous T if fertility is not a concern.

Strengths of our study include the inclusion of multiple academic centers in geographically varied regions to ensure diversity of our patient population. Limitations of our study include both small sample size, the retrospective nature of our data collection, and lack of long term follow up data. Additional limitations are our lack of inclusion of data related to hormone levels over time, symptomatic improvement, semen parameters, or fertility. These measures were outside of the scope of our study but will certainly be useful in future similar investigations into the predictive value of pre-treatment hormone levels as they relate to symptomatic and fertility outcomes.

Conflicts of Interest: All authors have completed the ICMJE uniform disclosure form (available at http://dx.doi.org/10.21037/tau.2020.01.30). The authors have no conflicts of interest to declare.

Ethical Statement: The authors are accountable for all aspects of the work in ensuring that questions related to the accuracy or integrity of any part of the work are appropriately investigated and resolved. The study was approved by The University of Miami IRB (No. 20170849).