Erectile dysfunction (ED), defined as consistent or recurrent inability to attain and/or maintain erection sufficient for satisfactory intercourse, is a medical condition that is expected to affect more than 320 million men worldwide by 2025 (1,2). While ED is a benign disorder, it nevertheless adversely affects the quality of life of the patients and their partners (3).

It has been previously demonstrated that tobacco use is a modifiable risk factor for ED (4). For example, in a cross-sectional study of Chinese men in Hong Kong, smoking of ≥20 cigarettes daily was associated with a 50% increase of having ED (5). Moreover, improvement in ED in smokers after cessation was observed in a prospective study (6). Specifically, after one year of smoking cessation, ≥25% of ex-smoker had improved erectile function but none of the current smokers. However, although such epidemiological studies have clearly shown that smoking cessation significantly enhances sexual health, the underlying mechanism remains unknown (7).

As such, the present study was designed to investigate the effect of tobacco cessation on penile hemodynamics and histology in a rat model of cigarette smoking (CS)-related ED. We assessed the functional, histological and molecular changes in rats that underwent a period of exposure followed by cessation of exposure for 4 and 8 weeks. Our goals were to elucidate that cessation of tobacco exposure was associated with improved penile hemodynamics and histology.

All animal experiments were approved by the Institutional Animal Care and Use Committee (Approval number: 2012121822, 1 August 2013). All surgeries were performed under Zoletil anesthesia to minimize suffering.

The procedure was carried out as described previously (8,9). Briefly, rats to be exposed to CS were housed in 28×28×19 cm3 enclosed plastic cages that were connected to a CS-generating device (8,9). The CS was produced from ignited cigarettes that each contained 10 mg of tar and 0.8 mg of nicotine (Marlboro, Philip Morris, Richmond, Virginia, USA). The cigarettes were burned continuously to exhaustion at a rate of one cigarette per 6 minutes.

Penile hemodynamic assessment was performed as described previously (10). Briefly, each rat was anesthetized with 20 mg/kg of Zoletil 50, and their cavernous nerves and penile crus isolated via midline laparotomy. A 23-gauge butterfly needle connected to a pressure transducer and filled with heparinized saline (200 U/mL) was inserted into penile crus. A bipolar hook electrode was then used to stimulate the cavernous nerves. The stimulation parameters were 50 seconds continuous trains at 1.5 m Amp, 20 Hz and 0.2 ms pulse width (A-M Systems, Sequim, WA, USA). For further analysis, the maximum increase of ICP for 3 stimuli per side was utilized for each animal. Penile hemodynamics was reported as the intracavernosal pressure (ICP)/mean arterial pressure (MAP) ratios to normalize for variations in systemic blood pressure.

Data were analyzed with Prism version 6 (GraphPad Software, La Jolla, CA, USA) and expressed as mean ± standard error of the mean (SEM) for all continuous variables. Statistical analyses were performed using one-way analysis of variance, followed by the Tukey-Kramer test for post hoc comparisons. Statistical significance was considered at P<0.05.

Table 1 summarizes erectile function and serum testosterone levels. Mean ICP and ICP/MAP ratios were significantly lower in the S group compared to the N and Q8W groups (P=0.0260 and P=0.0189, respectively). While the Q4W group also had higher mean ICP and ICP/MAP ratios than the S group, the difference did not reach statistical significance (P=0.4549 and P=0.2536, respectively). Representative peak ICP graphs are shown in Figure 1. 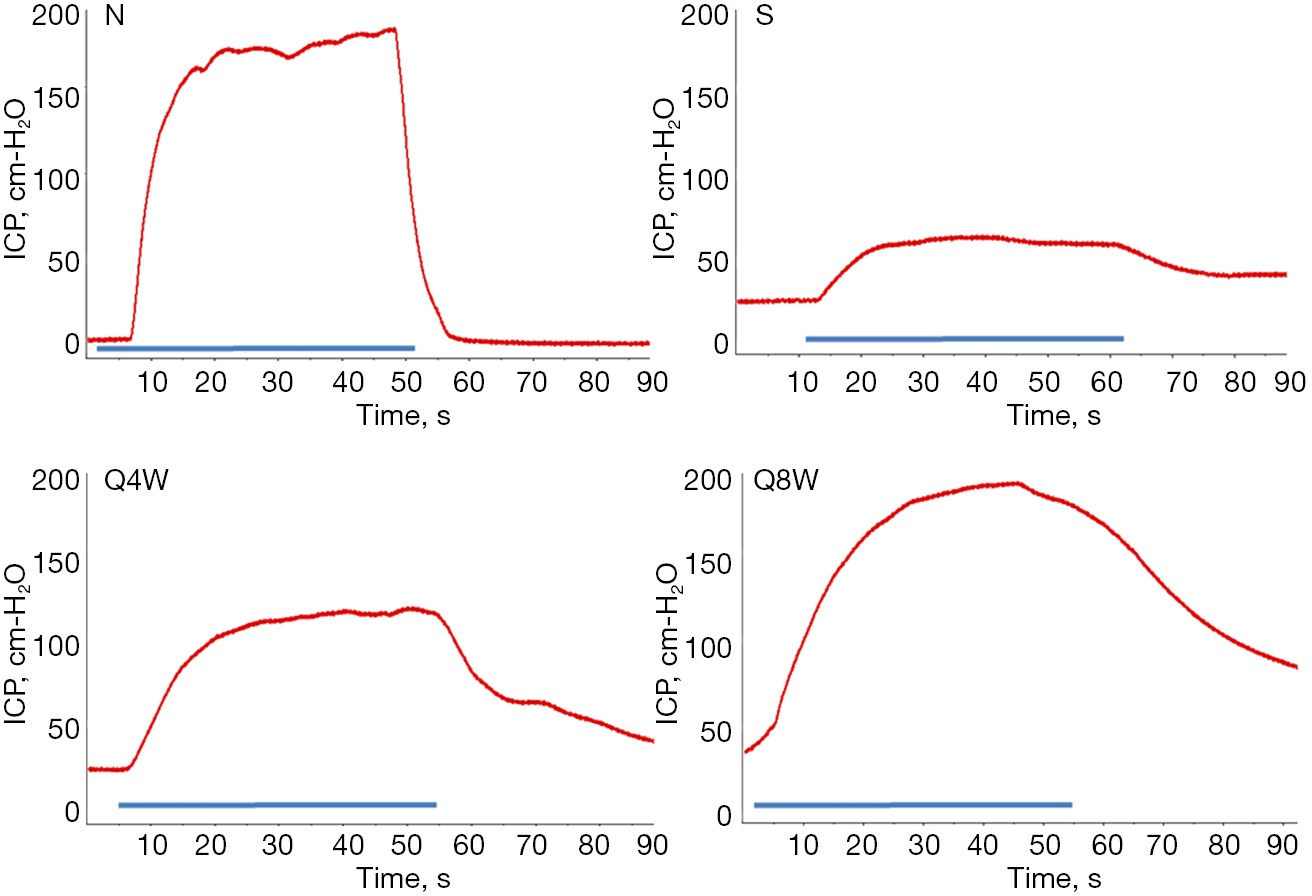 Serum testosterone was significantly lower in the S group than in the Q8W group (P=0.0371). Although there was no statistically significant difference between N and S groups (P=0.0884), there was a trend towards decreased testosterone level in CS-exposed rats.

As illustrated in Table 2, expression of 8-OHdG (one of the predominant forms of free radical-induced oxidative DNA damage products) in the S group was significantly higher than in the N and Q8W groups (P=0.0001). Significant difference in 8-OHdG expression was also noted between the N and Q4W groups (P=0.0018). No significant difference was observed between the S and Q4W groups. Representative images are shown in Figure 2. 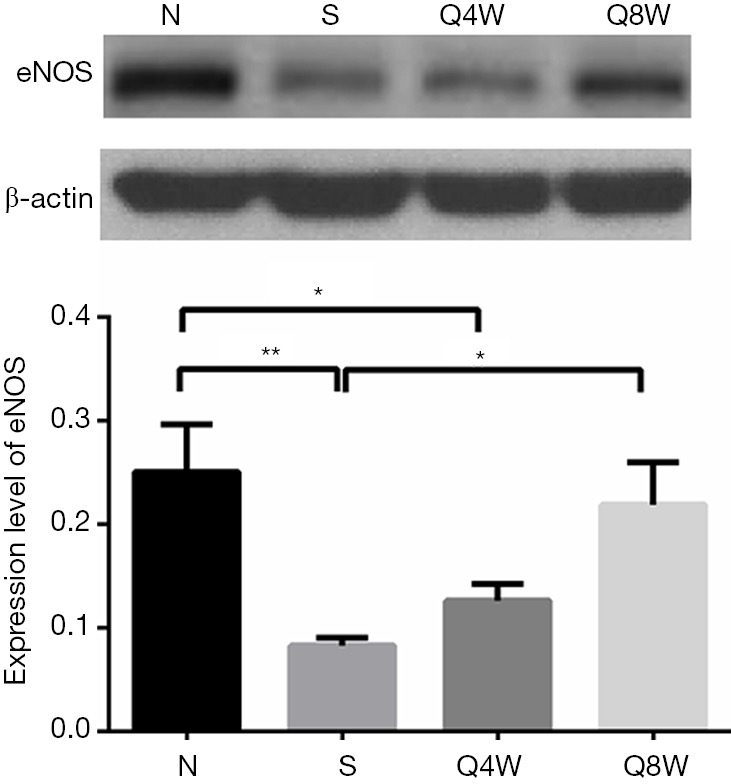 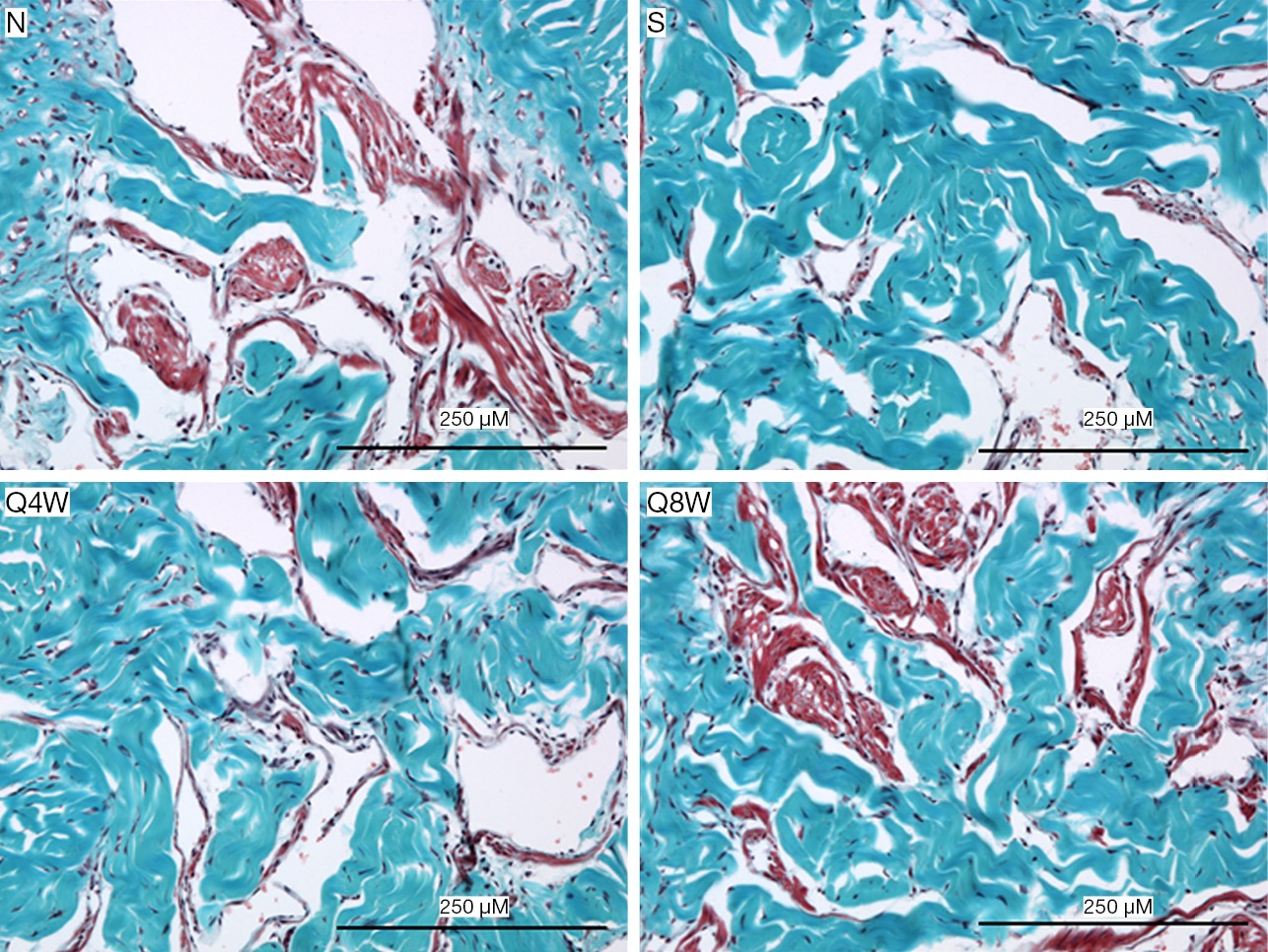 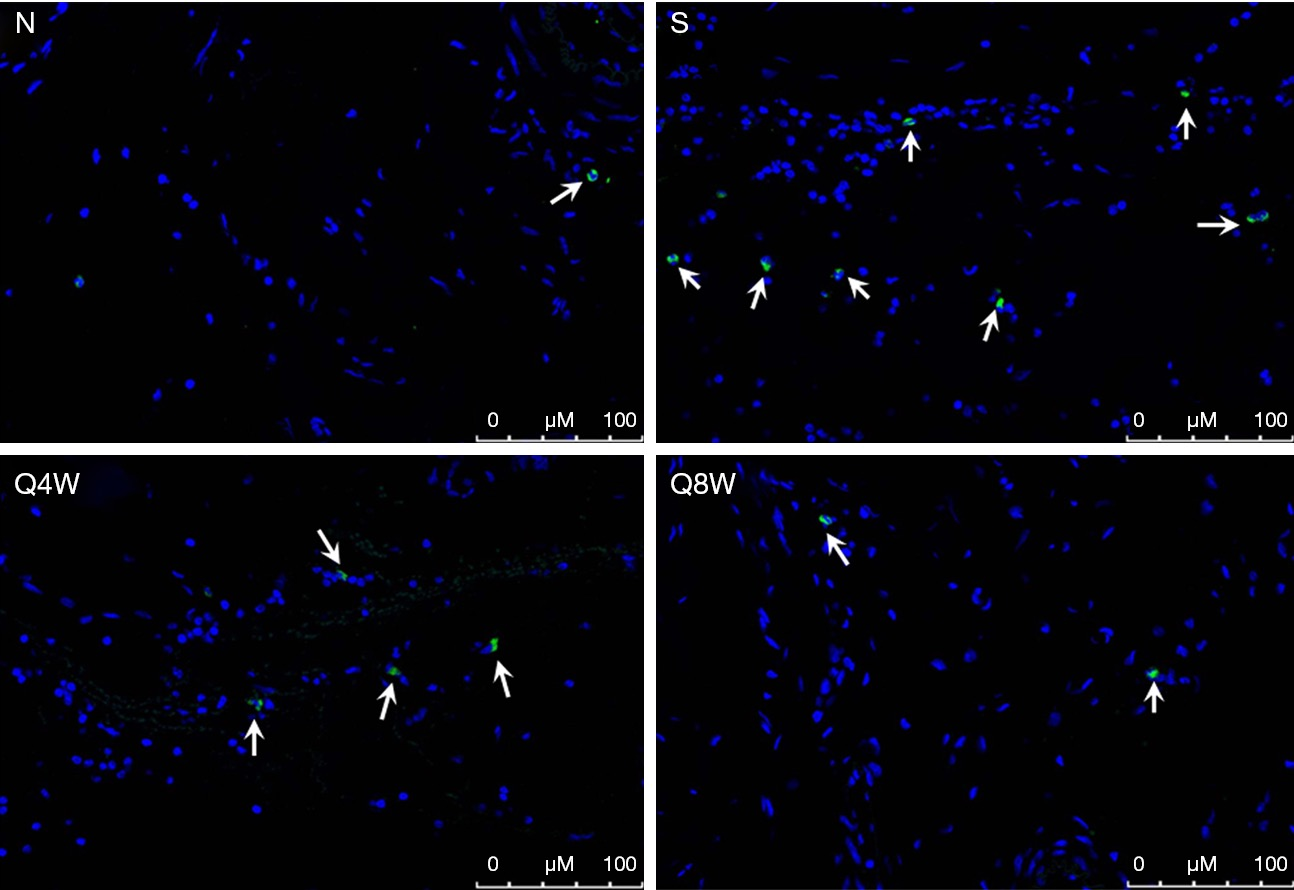 It has been shown that cigarette smoking is dose-dependently associated with ED, and smoking cessation can lead to recovery of erectile function (6,12). However, the underlying mechanisms responsible for the development of ED or for the recovery of erectile function are largely unknown. Thus, we wished to fill this knowledge gap in the present study by establishing animal models that mimic human smoking and smoking cessation, followed by examining their penile tissues for possible changes in key cellular and molecular markers, such as oxidative stress and apoptotic index, nNOS and eNOS expressions, and cavernosal smooth muscle content.

There are more than 4,000 volatile chemicals other than nicotine present in cigarette smoke, many of which have not been evaluated in terms of effects on steroidogenesis (13). There have been conflicting reports of the effects of tobacco on serum testosterone levels (14-16). These conflicting results may be attributable to variability in laboratory methods, time of specimen collection, or other factors. Oyeyipo et al. demonstrated that nicotine administration significantly decreased (P<0.05) serum testosterone in rats in a dose-dependent fashion; nicotine cessation mitigated some of this effect (17). Our study supports these prior findings. Whether nicotine or another component of tobacco smoke was the driver of this effect remains unclear and a topic for further investigation.

It has been shown that smoking-related ED is associated with an increase in reactive oxygen species, and these free radicals cause ultrastructural damage to the corporal tissue and alter NOS activities in mice, rats, and humans (8,18,19). In our previous studies, CS-exposed animals had higher levels of systemic oxidative stress when compared to control animals (8). In the present study, we further confirmed that CS-exposed animals had higher levels of 8-OHdG expression in penile tissue and this was ameliorated by smoking cessation. We thus hypothesize that oxidative stress is a fundamental underlying mechanism for tobacco-induced impairment of penile hemodynamics.

The health benefits of tobacco cessation in terms of prevention of cancer and cardiac disease are well known. However, the potential impact of tobacco use on erectile function is much less known. Given the importance of sexuality to most men, advice that tobacco cessation may help preserve erectile function may be a more powerful motivator for quitting than the more abstract and long-term risks of cancer and heart disease. Thus, findings from the present study may serve as a novel means of commanding more attention and creating stronger motivation especially for Chinese and other Asian populations to stop smoking.

There are several limitations in the present study. For example, the nature of CS exposure in our animal model does not faithfully reflect the typical human CS exposure of repeated short doses throughout a day. Another critical question is how the CS-induced systemic stress might affect the outcome. We hope to address these important questions in our future research.

To our best knowledge, this study is the first to evaluate the effects of tobacco on erectile function and tissue structure in a rat model. Our findings suggest that smoking cessation is an important component of the therapeutic approach to ED, and healthcare providers should advise patients that stop smoking is not only beneficial for their heart and lung but also for their sexual capability.

We confirmed that chronic CS exposure increases penile oxidative stress and apoptosis, and decreases nNOS, eNOS and smooth muscle components in corporal tissue. We also uncovered that tobacco cessation is associated with partial recovery of penile hemodynamics. We thus hypothesize that smoking cessation may ameliorate ED via reduction in oxidative stress. While this in vivo model demonstrated the benefits of smoking cessation, further studies are required to verify the responsible molecular mechanisms.

Conflicts of Interest: All authors have completed the ICMJE uniform disclosure form (available at http://dx.doi.org/10.21037/tau.2019.12.45). The authors have no conflicts of interest to declare.

Ethical Statement: The authors are accountable for all aspects of the work in ensuring that questions related to the accuracy or integrity of any part of the work are appropriately investigated and resolved. The study was approved by the Institutional Animal Care and Use Committee of the Laboratory Animal Center at Laboratory Animal Center, Department of Medical Research, Chang Gung Memorial Hospital at Chiayi (Approval number: 2012121822).