Nowadays, renal cell carcinoma (RCC) is recognized as one among the most common urological malignancies worldwide, accounting for barely 2–3% of all human malignancies, with approximately 65,340 newly diagnosed patients and 14,970 deaths in 2018 in U.S. alone (1,2). Nevertheless, with the rapid growth of image technology, more RCCs can be diagnosed at an early stage, before the presentation of any clinical symptoms. However, nearly 30% of initially diagnosed RCC patients still suffer from metastatic lesions (3). Previous studies have shown RCCs are not sensitive to either radio- or chemotherapy. Thus, the long-term prognostic outcome of patients with metastatic RCCs remains unfavorable, even after cytoreductive surgery. The first-line therapies for advanced RCCs includes immunotherapies and targeted therapies. However, tolerance against the above therapies would soon develop shortly after the initiation of therapy, leading to the low overall survival (OS) of patients with advanced RCCs (4). At this point, a further study of the mechanism which induces the pathogenesis, progression and metastasis of RCC, based on which more effective treating methods can be developed, is urgent for urologists.

MicroRNAs (miRNAs), commonly recognized as a family of small non-coding RNA molecules containing about 22 nucleotides in length, have been reported to negatively regulate gene expression (5). Many studies have indicated miRNAs contribute to several metastatic steps of various human malignancies (6). Furthermore, several miRNAs were reported to participate in RCC invasion and metastasis, such as miR-452-5p, miR-532-5p, and miR-766-3p (3,7,8). A great amount of evidence indicates that miR-30a-3p plays influential roles in tumor suppression in multiple kinds of tumors (9,10). However, its biological function in RCC has not been fully studied.

Autophagy related protein 12 (ATG12) is a human homolog of a yeast protein involved in autophagy, which is a process of cellular component degradation and reutilization. Beyond that, it can also kill cells through an autophagy-independent process (11). In previous studies, AGT12 was found to be down-regulated by oncogenic RAS in colorectum malignancies and prolonged OS (12). However, the correlation between ATG12 and miRNAs in RCC has not been studied.

In this article, we investigated bio-function of miR-30a-3p, which is a novel tumor suppressor inhibiting RCC invasion and migration. Furthermore, the downstream target gene of miR-30a-3p, ATG12, was recognized and its biological roles in RCC progression was verified.

The use of human tissues was authorized by research medical ethics committee of Shanghai Renji Hospital {Ethics board approval number: Renji Ethics [2017]091}. RCC samples and paired normal renal tissue samples were obtained from the Department of Urology, Renji Hospital Affiliated to Shanghai Jiaotong University, School of Medicine. The fresh tissues obtained from clinic were preserved in liquid nitrogen for prevention of RNA degradation.

Both of the human RCC cell lines, A498 and 786-O, as well as the human normal renal cell line HK-2 were originally purchased from Cell Bank of the Chinese Academy of Sciences (Shanghai, China). All cell lines were cultured as previously described (7).

Transfection and vector construction was performed as we described previously (7). and after 48 hours of transfection, the cells were harvested for the following experiments.

For the purpose of investigating invasion and migration, transwell and scratch assays were both performed as previously described (7). The two experiments were repeated for more than three times to ensure the similar outcomes.

For the verification of ATG12 as the downstream target gene of miR-30a-3p, we performed luciferase reporter assays. The assay was performed as we described previously (7).

Protein extraction and Western blot analysis was performed as we described previously.

IHC was conducted with a primary antibody against ATG12 (1:100, Proteintech, 2011S, Wuhan, China) and a secondary antibody (1:200, HRP, Servicebio, GB23303). IHC and calculating of staining index was performed as we described previously (7). Cells were scored only when the clear tumor cell morphology was observed.

miR-30a-3p is down-regulated in RCC tissues

For purpose of understanding the potential mechanism of RCC cell invasion, metastasis, and tolerance of target therapy, thus explore differently expressed miRNAs and their biological roles in RCC, an overlap of several miRNA arrays from the GEO sets (Figure 1A), which compared RCC tissues with normal tissues (GSE109368, GSE73342, and GSE12105), metastatic RCC with non-metastatic RCC (GSE37989 and GSE23690), and target therapy sensitive with insensitive (GSE74174, GSE37766, and GSE32099) was conducted. It turned out that only miR-30a-3p overlapped in the Venn map (Figure 1B), and it had not been previously reported in RCC before. 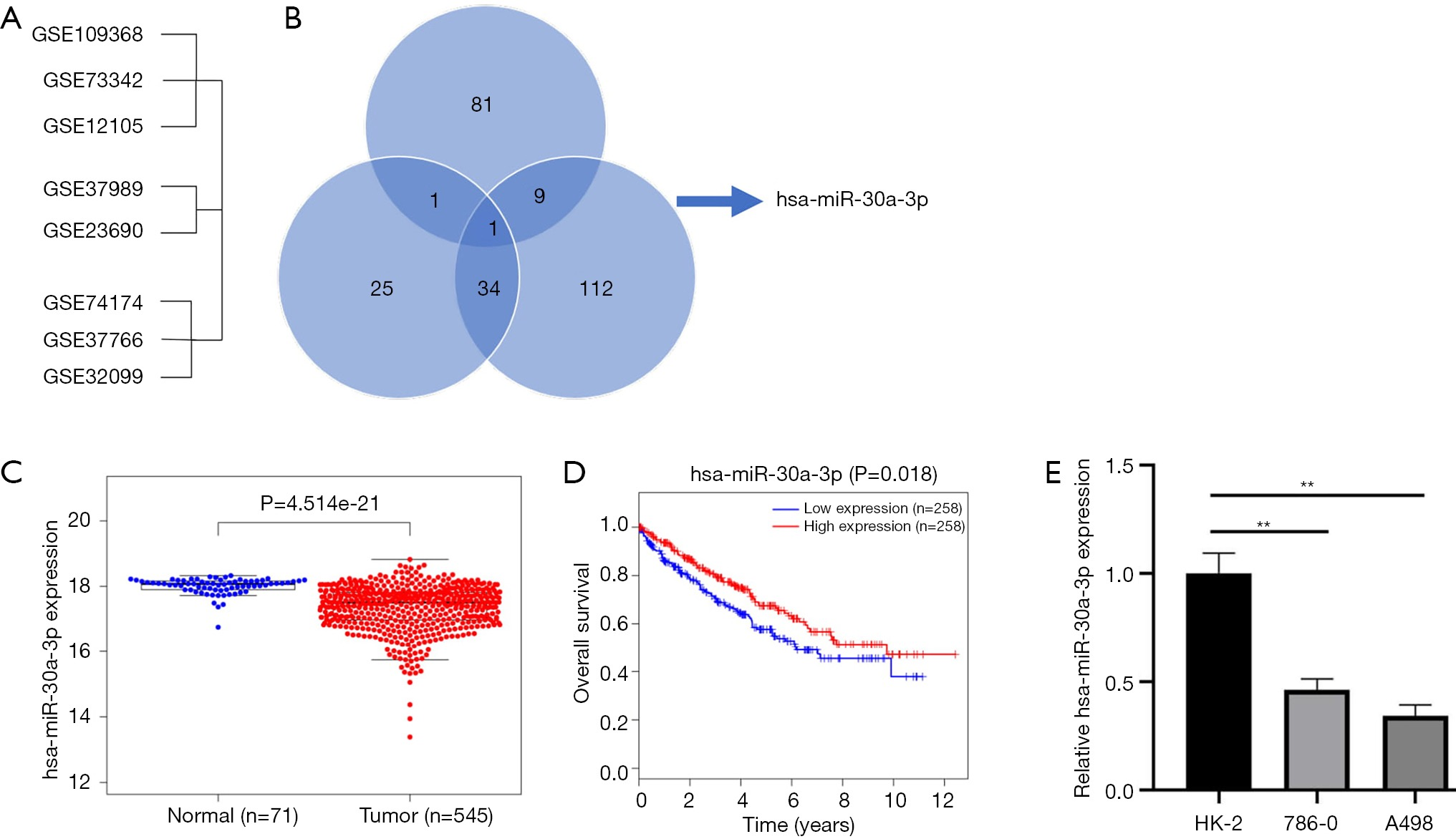 Two cell lines were used for further exploration of different expression levels of the miR, with HK-2 as a contraction. The expression of miR-30a-3p was decreased in RCC cell lines when compared to the normal control (HK-2) (Figure 1E). 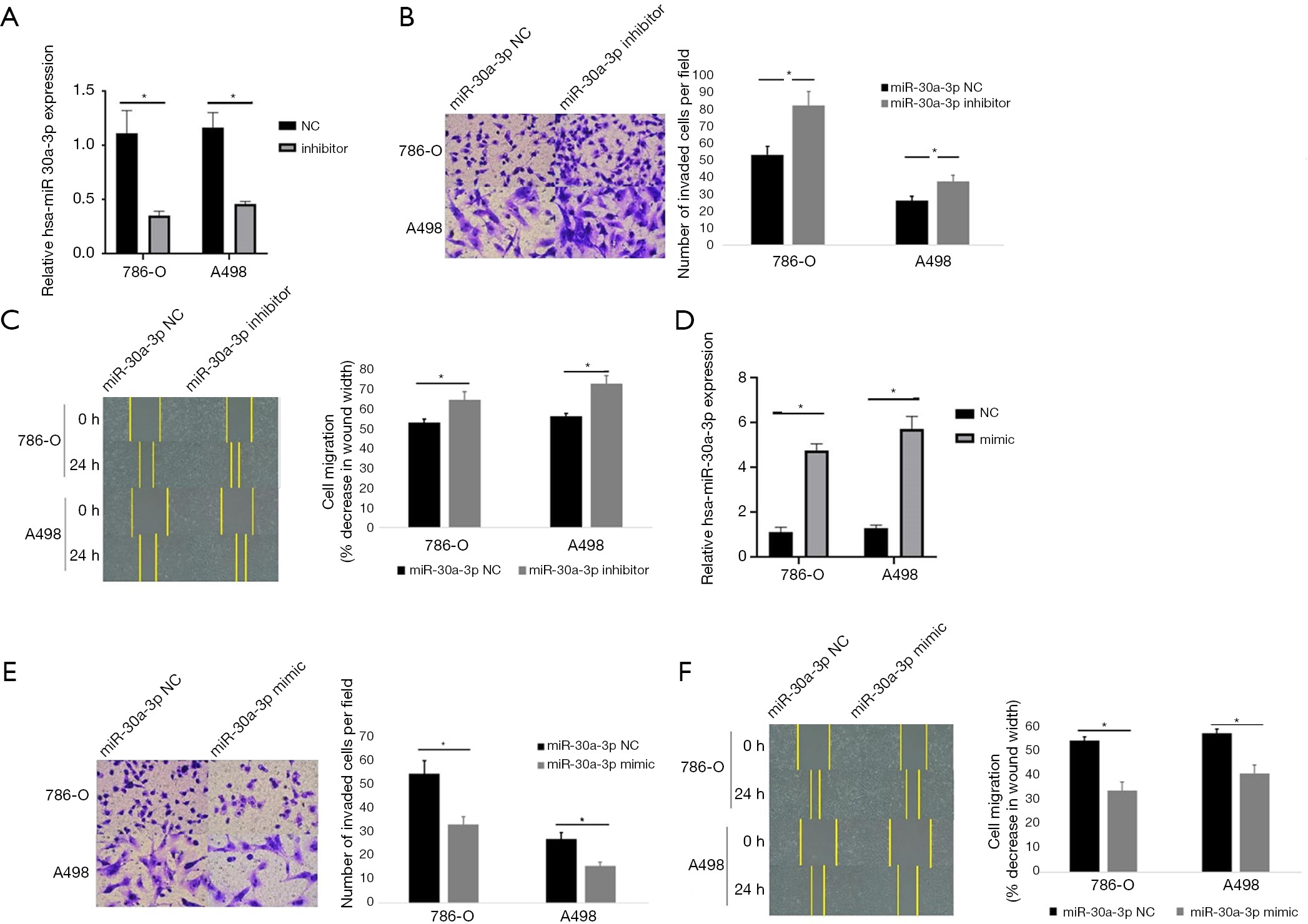 Taken together, the data above revealed that miR-30a-3p possibly functions as a tumor suppressive miRNA in RCC.

For further studies of miR-30a-3p regarding its roles in the development and progression of RCC, we analyzed the signaling pathway and target genes of miR-30a-3p. Analysis of the potential signaling pathways of miR-30a-3p was done based on the KEGG database (Figure 3A). According to the analysis, we found that the FOXO signaling pathway was the most differently expressed pathway. Then, we searched for the potential genes encompassed in this signaling pathway, and 79 genes were involved. In addition, we explored the possible target genes of miR-30a-3p through computational approach. Notably, the overlap in these two groups of genes was ATG12 (Figure 3B). Next, we used the bioinformatics analysis according to miRNA database (TargetScan), and three putative binding sites for miR-30a-3p were found in the 3' untranslated region (UTR) of ATG12 (Figure 3C). Therefore, a luciferase reporter assay was accomplished to check whether ATG12 plays a biological function as a target gene of miR-30a-3p, and the results confirmed our hypothesis (Figure 3D). In addition, Western blotting analysis was performed for the detection of protein levels of ATG12. When the miR-30a-3p mimic was introduced into the 786-O cell line, a decrease in ATG12 levels was observed. In contrast, the level of ATG12 increased when miR-30a-3p was inhibited (Figure 3E,F). The data from the TCGA database also indicated there exists a negative relationship between the expression of ATG12 and the expression of miR-30a-3p in RCC tissues (Figure 3G). 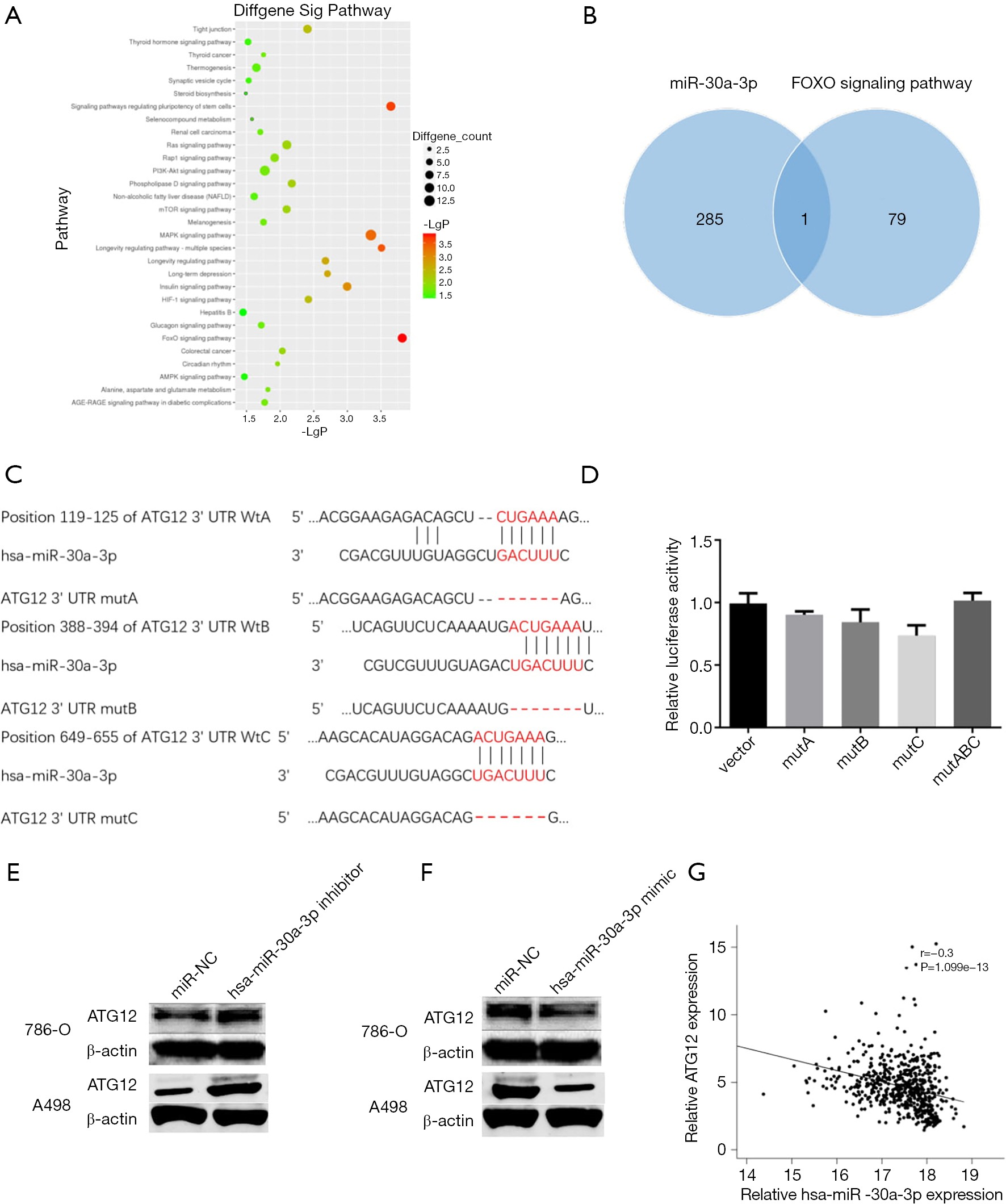 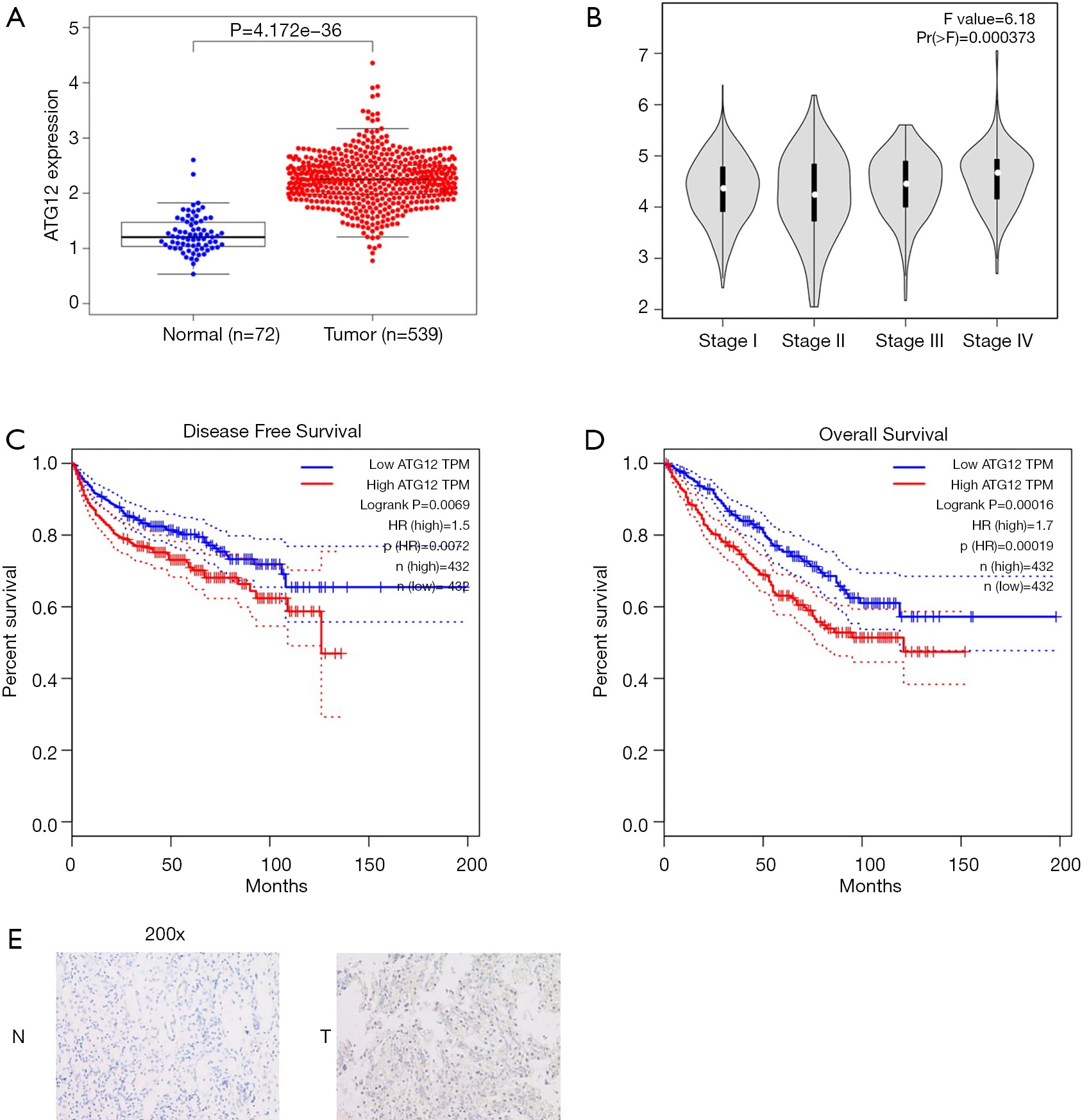 Taken together, the downregulation of ATG12 correlated with a better prognosis of RCC.

In the current study, we first revealed miR-30a-3p as a potential tumor suppressing miR of RCC metastasis and is statistically correlated with a better prognosis. The expression level of miR-30a-3p was obviously low in both RCC samples and cell lines, when compared to normal tissues and HK-2 cell line. In addition, ATG12, an autophagy promoter, turned out to be the downstream target gene of miR-30a-3p, and at the same time, is a prognostic marker indicating a poor oncologic outcome of RCC. Consistently, miR-30a-3p inhibits cell migration and invasion in vitro and inhibits RCC metastasis by targeting ATG12. Among the above evidences, it can thus be suggested that miR-30a-3p acts as a tumor suppressor and a metastasis-inhibiting microRNA in RCC.

In reviewing the literature, several reports showed that miR-30a-3p was a tumor suppressor in multiple kinds of malignancies. For example, the low expression of miR-30a-3p is directly related to poor OS and recurrence free survival in triple-negative breast cancer (9). In lung adenocarcinoma, miR-30a-3p has already shown its value as a prognostic predicting factor (13). In another study, miR-30a-3p has been demonstrated to have the biological function in inhibiting proliferation, invasion, and metastasis in hepatocellular carcinoma (HCC) (14). However, the biological role of miR-30a-3p in the progression and metastasis of RCC remained unclear. Therefore, we conducted our study, and identified its biological function in RCC, as an anticarcinogenesis miRNA.

For the purpose of identifying targets of miR-30a-3p in RCC, several target-predicting online software and datasets were used. And we found ATG12 is a potential target gene of miR-30a-3p. ATG12 is a key protein involved in the elongation and maturation of autophagy vesicles (11). One study showed ATG12 plays as a pro-autophagic protein in breast cancer and is involved in the regulation of epirubicin sensitivity (15). In colorectal cancer, the inhibition of ATG12-mediated autophagy is correlated with the improvement of radiosensitivity (12). In another study, ATG12 was reported to be a target gene of miR-378, which enhances migration and invasion in cervical cancer (16). In our study, ATG12 was proved to be highly expressed in RCC cells and had a negative relationship with the prognosis of RCC.

Unlike the favorable prognosis of localized RCC, metastatic RCC is accompanied by rather poor oncological outcomes. Thus, further study of the biological mechanism behind the invasion and migration of RCC cells is urgent and important. In conclusion, this finding may help us to better understand the role of miR-30a-3p in progression and metastasis of RCC by targeting ATG12. The result may have important implications for developing prognostic model or further therapeutic methods.

In this article, we identified miR-30a-3p as a new microRNA that plays a biological function in the invasion and metastasis of RCCs and found its downstream target gene, ATG12, which is a member of the FOXO signaling pathway.

Conflicts of Interest: All authors have completed the ICMJE uniform disclosure form (available at http://dx.doi.org/10.21037/tau.2019.12.10). The authors have no conflicts of interest to declare.

Ethical Statement: The authors are accountable for all aspects of the work in ensuring that questions related to the accuracy or integrity of any part of the work are appropriately investigated and resolved. The use of human tissues was authorized by research medical ethics committee of Shanghai Renji Hospital {Ethics board approval number: Renji Ethics [2017]091}.