When to ask male adolescents to provide semen sample for fertility preservation?

Current epidemiologic studies estimate that 12,060 new cancer cases were expected to occur among children 0 to 14 years of age in 2012, and childhood cancer incidence rates are increasing at a rate of 0.5% per year from 2004 to 2008 (1). According to Surveillance, Epidemiology and End Results (SEER) data, 9% of patients diagnosed with cancer from 2004 to 2008 were younger than 45 years old, with “childhood” malignancy estimated to affect up to 1/168 Americans aged 15-30 (2,3). While the incidence rates for some forms of childhood cancer have increased since the mid-1970s, death rates have declined dramatically for most childhood cancers and survival rates have markedly improved (4). Due to the improvements in the treatment regimens, cancer patients are exhibiting better outcomes, longevity and potentially cure or remission. With the average cancer patient expected to have prolonged survival, physicians should counsel patients on the long term adverse effects of cancer treatment, including the preservation of fertility. It is known that certain chemotherapy and radiotherapy treatment regimens can lead to infertility, and efforts to assess the success of fertility preservation in children who are at risk of fertility impairment or sterility due to cancer treatment are currently underway. A report from the Childhood Cancer Survivor Study showed that patients who had undergone cancer treatment and were not surgically sterile were half as likely to contribute to a pregnancy when compared to their siblings (5). These serious long-term adverse effects of oncologic therapy in adolescent and young adult males and females who would otherwise expect to lead a normal life after surviving cancer, including raising a family of their own, can have serious consequences on the remainder of their adulthood (6). The concern for future fertility of adolescents is not limited to cancer patients: Klinefelter syndrome (KS) patients who appear to have a decline in their fertility potential shortly after the onset of puberty (7), as well as patients who are being treated with cytotoxic medication for conditions such as Systemic lupus erythematosus (SLE) or benign renal diseases that can also impair germ cells and reproductive organs.

We prospectively evaluated healthy volunteers at a single tertiary-care center in the United States according to an Institutional Review Board (IRB)-approved protocol. All subjects underwent an initial screening for orgasmic, erectile, ejaculatory function, general health, sexual history, and history of sexual development. Volunteers responded to the American Urological Association (AUA)/International Prostate Symptom Score (IPSS), International index of erectile function (IIEF)-15, and Male Sexual Health Questionnaire (MSHQ) questionnaires to rule out any confounding medical or urological history. Volunteers were excluded if the AUA/IPSS >1, IIEF-15 less than the maximum score in each of the areas, or less than 5 on any item in the MSHQ. Our inclusion criteria were men between the ages of 18 and 65 years with normal erectile, ejaculatory, orgasmic, and voiding function who do not use prescribed or over-the-counter medications. All subjects had capacity to provide informed consent and no psychiatric history. All subjects were compensated for participation in the study.

Statistical analysis, included descriptive analysis of the study group, lognormal exponential to determine the cumulative percentage when each milestone occurs, linear regression to test for correlation between the onsets age of each of the milestones. And t-test was used to compare the mean response between the two age groups using JMP® v 10.0.2. 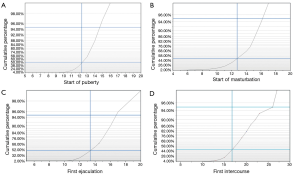 Table 2 Different intervals for the start of milestones
Full table 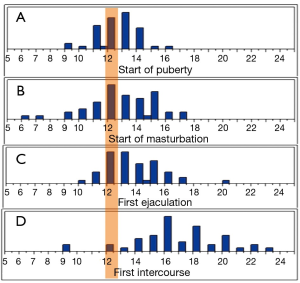 It is recognized that certain chemotherapy, radiotherapy, and cytotoxic treatment regimens can lead to irreversible declines in sperm production, and pre-treatment attempts at sperm cryopreservation may be critical for future fertility (5). The decline in fertility potential for adolescents and young adult males who would otherwise expect to lead a normal life can have serious consequences on the reset of their adulthood. Male infertility can occur as a result of cytotoxic damage to the rapidly differentiating spermatogonia during cancer treatment from a wide variety of chemotherapeutic agents (14,15). The extent of testicular damage and recovery are both specific to the chemotherapeutic agents and the treatment dose used. Gonadal damage usually peaks at six months (16), it can persist up to two years and in patients receiving alkylating agents the impairment can be lifelong (17). Similarly, radiotherapy induced testicular damage and the time for sperm count to return to pretreatment levels are also both dose-dependent (18,19). During chemotherapy and/or radiation, the germ cells may be both quantitatively and qualitatively damaged (17). Additionally, the undesirable effects of those therapies depends on intrinsic characteristics of the patient, such age (20), the acuity of illness, the genetic predisposition of the germ cells to damage, and tumor biology (21,22). It is clear that the male germinal epithelium is very sensitive to chemotherapy and radiation; therefore, adolescents, and their parents have to be counseled that infertility is a likely side-effect with these therapies. For these patients, sperm cryopreservation should be offered, since the majority of male cancer survivors wants their biological offspring post-treatment (23,24).

Traditionally, semen collection procedures include abstinence for a minimum of 48 hours before ejaculation and the gathering of multiple samples (up to 3) to maximize the amount of sperm available for cryopreservation, especially if patients have suboptimal semen samples. Because of the large variability present in semen parameters (25), it is extremely difficult to correlate semen quality with any sexual or development milestones. Hence, there is a limited knowledge of semen parameters and sperm quality in young adolescents. Of all the factors that can affect successful semen sample collection, spermarche is the most important in determining the success of obtaining a sample that contains sperm. Spermarche tend to occurs around the age of 13, and can range from age 12 to the age of 15 (26,27). The reported age of spermarche correlated with the reported age, based on interviews, of first conscious ejaculation (28). Any adolescents around this age who have experienced ejaculation should be considered a candidate for self-stimulation for collecting a semen sample. It is important to individualize patient management, recognizing that disease status may adversely affect sperm numbers or quality, and that some adolescents who ejaculate will have azoospermia. These are components of counseling that should be provided before attempts at cryopreservation. However, advances in assisted reproductive technology have recently changed the semen quality parameters necessary for fertilization, obviating the need for a high pre-freeze sperm density (29). As a result, perfect semen parameters are not always necessary.

Limited studies have previously investigated the success rate of masturbation in adolescents to provide semen samples for cryopreservation, and the success rates are usually good. Postovsky et al. evaluated the feasibility of sperm cryopreservation in 27 male adolescents between the ages of 14 and 19 years. Eighty eight percent (24/27) were successful in self-stimulating and delivering a sample for sperm preservation (30), and all patients that ejaculated had sperm in the ejaculate. Another study evaluated the success of semen sampling in 86 adolescents (aged 12.2-17.9 years) showed similar success rates. Of the 86 boys, 74 (86%) produced a semen sample by masturbation, and 88.4% had spermatozoa in their ejaculate (31). Similar results were reported in other studies on semen sampling in adolescent cancer patients (32,33). Despite the reported success, only 19% of male cancer patient bank sperm before treatment (23). And almost half of oncologists either never mention sperm banking or offer it to less than a 25% of their patients who will receive cancer treatment potentially damaging to fertility (10). The lack of confidence by the practitioner obtaining useful samples from adolescents, and the difficulty due to the sensitivity of the topic to discuss with adolescent patient and their families have discouraged practitioners from embracing the practice of offering cryopreservation (10). Moreover, the disparities in the stages of maturity, since puberty may take place anywhere from the age of 10 to 14 years (34), and the lack of guidance about the age of when to approach patients for semen collection, may cause confusion among some practitioners and further discourage counseling.

Many of the subjects are asked to recall features of their development from as many as 20 years prior, and it is possible that the results may contain an element of recall bias. However, when we stratified the patients into older and younger groups there was no statistical different between the two groups. Studies that tested the validity of self-reported age of menarche found it to be comparable with that of recorded age (38), and the discrepancies in the reported timing of specific milestone events can be as low as two months (39). It is also possible that subjects with relatively late onset of milestones may be less likely to volunteer for this study, as this may contribute to an element of shame.

The issue of fertility preservation and semen cryopreservation is also relevant in the adolescent KS population. Early sperm retrieval from semen or testicular tissue has been suggested by several investigators (40). KS patients have optimal testicular function after the onset of puberty until mid-puberty, and decline thereafter (41). In some cases, sperm may be present in the ejaculate for young men at this age of 12-14 years, and it have been reported that sperm was found in 70% of ejaculated semen samples from adolescents with KS aged 12-20 years (7). However, sperm are routinely found in the testes of 70% of adult men with KS at our institution (42), so it is not critical that sperm be retrieved early unless treatment that can suppress sperm production such as testosterone therapy is required. Therefore, it is arguable at the onset of masturbation and ejaculation, fertility preservation for KS adolescents should be considered to cryopreserve sperm to potentially avoid future invasive surgeries in adulthood.

Funding: This study was funded by grant no: H6D-MC-X009 from Lilly USA, LLC and unrestricted research support from Irena and Howard Laks.