Renal cell carcinoma (RCC) is one of the most common malignant tumors in the urinary system, accounting for about 2–3% of adult malignancies. RCC not only invades adjacent fatty organs, but also tends to spread into veins, forming tumor thrombus. 4% to 10% of the local advanced renal carcinoma are fused with venous propagation into the renal vein and the inferior vena cava (IVC) tumor thrombus, among which the left renal tumor is relatively rare (1). IVC tumor thrombus is classified into four levels named as 0, I, II, III and IV, depending on the position of thrombus in relation to the hepatic veins (2). Previous surgical management of patients with IVC tumor thrombus originating from renal tumor usually included complete IVC thrombectomy, radical nephrectomy (RN), and ipsilateral retroperitoneal lymphadenectomy (RPLND) under the open operative condition. During this complex process, it requires a large muscle-cutting abdominal or thoracoabdominal incision, the control of IVC neoplastic emboli as well as the prevention of thrombus fragmentation (3). Advancement has arrived when the minimally invasive IVC tumor thrombectomy appeared recently, for example the laparoscopic or robotic assisted surgery (4-6).

However, for patients with higher IVC thrombus level (III, IV), surgical management is still challenging because of high death risk. A growing evidence has illuminated the safety and efficacy of presurgical molecular-targeting agents for non-metastatic or metastatic tumor (7-9) and tumor thrombus reaches into the IVC (10,11). Advances in neoadjuvant settings were shown to significantly extend the survival in metastatic RCC over the past decade. These kinds of molecular-targeting drugs include sunitinib, pazopanib and sorafenib, among which were proposed as potential candidates for preoperative application of IVC tumor thrombus (11,12). Herein, we present a 50-year-old mRCC patient with Mayo III IVC tumor thrombus, which means the surgery has been lost. The patient underwent robotic-assisted complete removal of the intracaval thrombus and radical left nephrectomy followed by renal arterial chemoembolization and pazopanib administration. Through the series of comprehensive treatment, the patient is now in a stable state. We reported the case so that this comprehensive therapy can provide a new scheme and mode of diagnosis and treatment for this kind of patients.

A 50-year-old man with left low-back pain for 20 days went to the local hospital and received a preliminary examination. B-ultrasound and magnetic resonance imaging (MRI) examination showed an approximately 10 cm × 8.3 cm mass in the left kidney, combined with a 3.6 cm × 2.6 cm mass extending to left renal vein and IVC (Figure 1A,B). Chest computed tomography (CT) examination indicated multiple nodules in both lungs, more likely to be metastasis. According to the thrombus level system mentioned above, IVC thrombus of this patient was at level III. Considering the patient developed a metastatic renal cancer and Mayo III IVC tumor thrombus, it was of high risk and low effectivity to perform surgical treatment at present. The patient denied a previous history of cancer and a family history of similar tumors and expressed that he went to our hospital as soon as getting the examination. No positive results were found in the physical examination.

According to the history and the examination, it is a definitive diagnosis that the patient developed a metastatic renal cancer and Mayo III IVC tumor thrombus. The patient was willing to accept the comprehensive treatment after being told the potential injury and risk of such a treatment.

Therefore, the patient underwent the left renal artery chemoembolization in our hospital and took pazopanib orally regularly 800 mg once a day without food for nearly two years. During the therapy course, there was no obvious adverse reactions. CT examination two years later showed that the tumor size decreased to about 9.2 cm × 6.5 cm, and the tumor thrombus in the inferior vena cava turned to level II (Figure 1C,D). Simultaneously, the metastatic lesions in the lung also obviously reduced as compared to before (Figure 2). 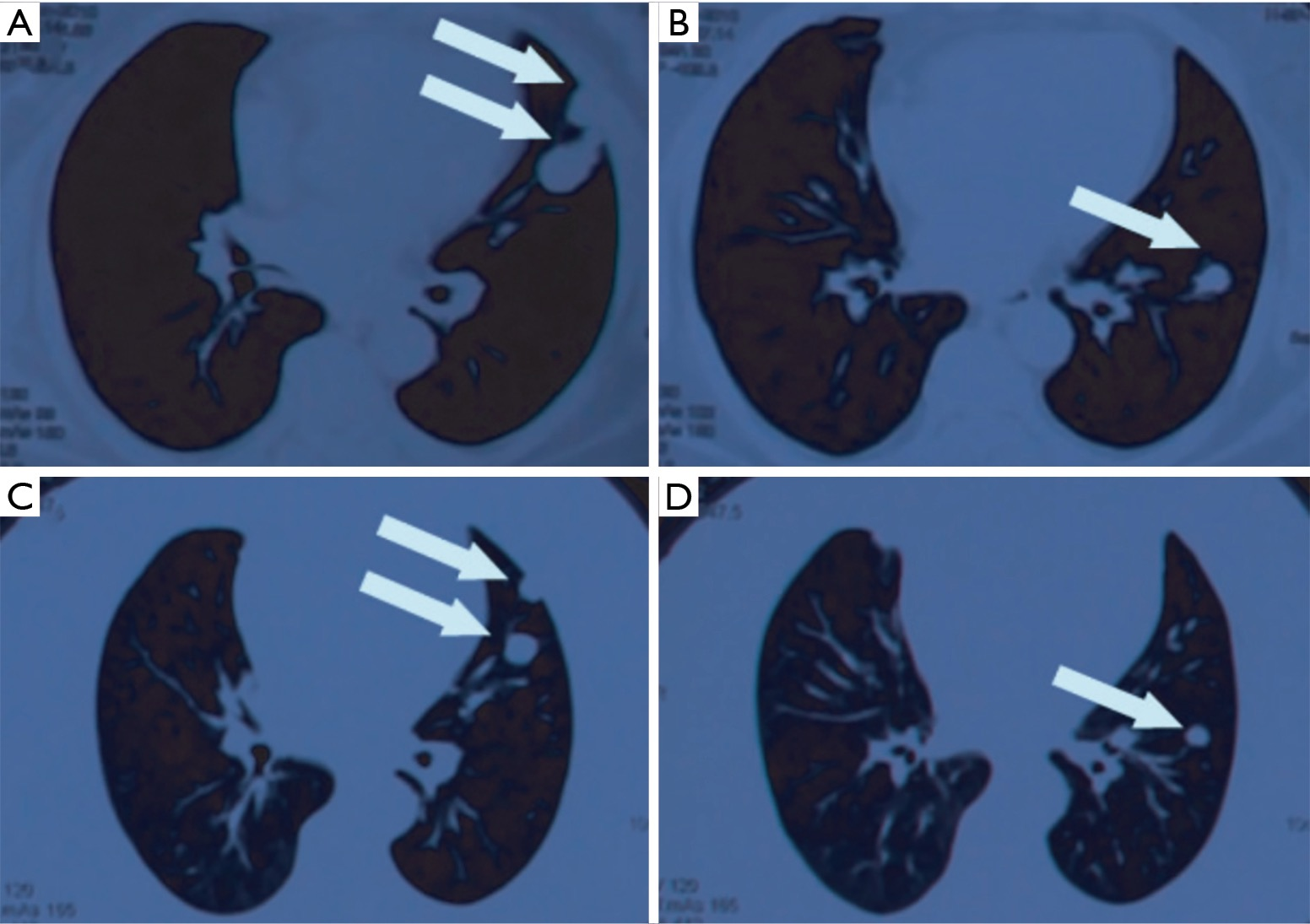 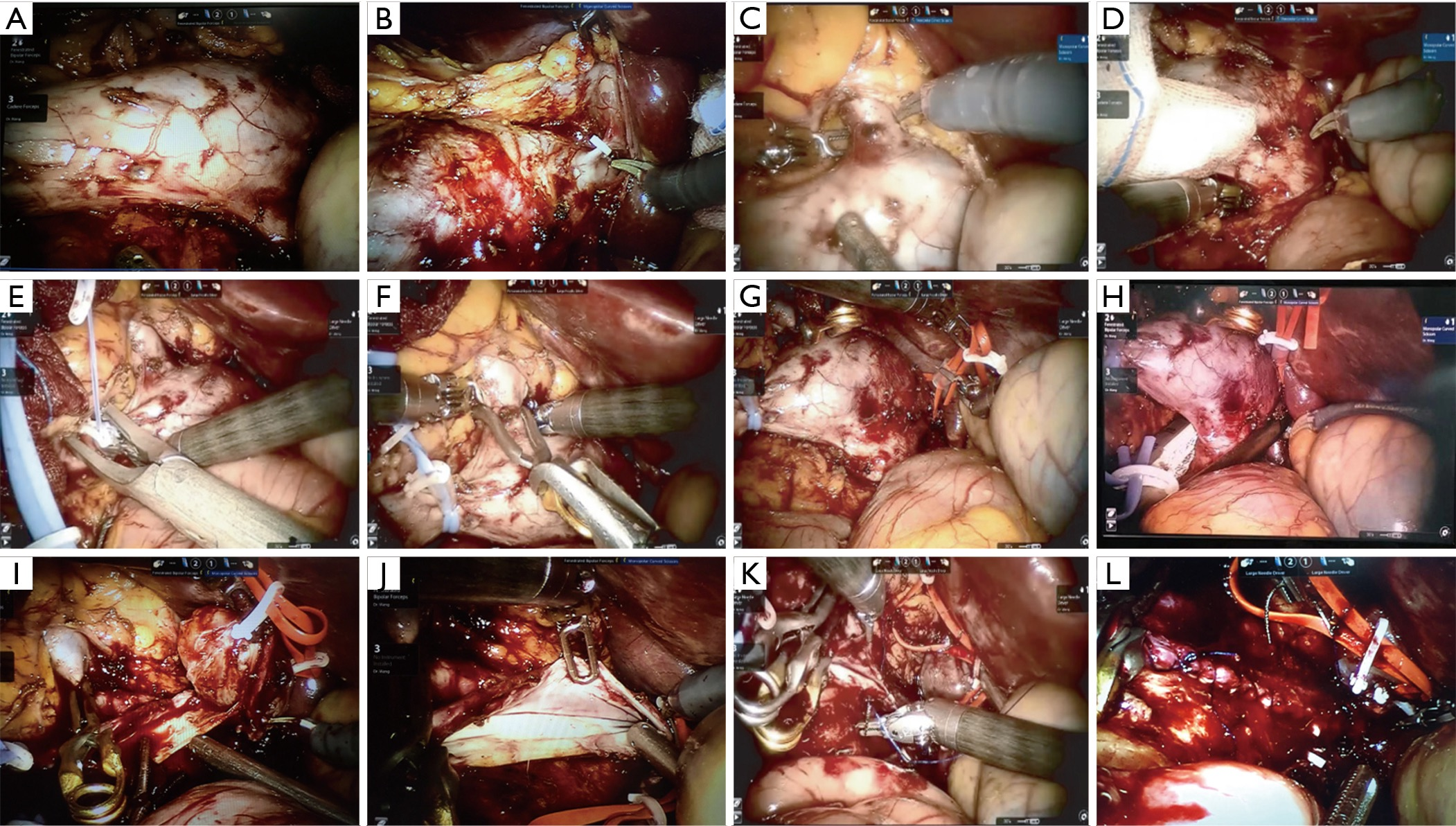 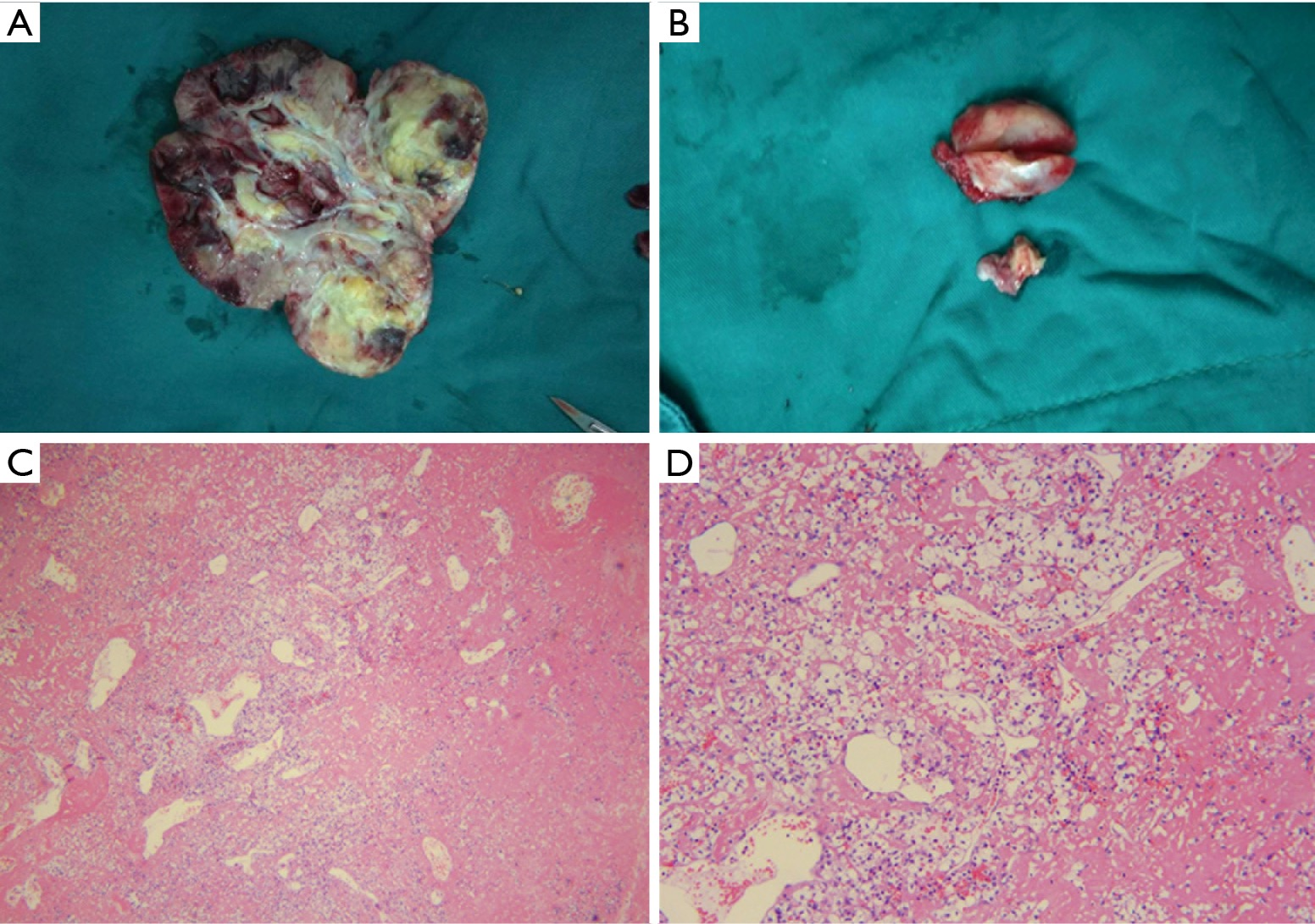 Postoperative pathology examination confirmed the diagnosis of dissected renal tumor to be clear cell carcinoma, Furhman II to III with necrosis, inferior vena cava tissue to be tumor thrombus with necrosis (Figure 4C,D). The patient continued to receive targeted therapy after hospital discharge and were followed up regularly. Currently, the lesion of lung was stable and patient was generally in good condition during the 36-month follow-up period.

RCC can not only invade adjacent adipose organs, but also easily spread into veins to form tumor thrombi. Due to the short right renal vein, it is more likely to fall off to the inferior vena cava after forming tumor thrombus. Therefore, most renal cell carcinoma with tumor thrombus is found in the right kidney cancer, while the left kidney cancer with tumor thrombus is relatively rare. After the formation of vena cava carcinoma thrombi in the left renal vein, it is easier to establish multi-branch collateral circulation. The formation of long-term collateral circulation makes the renal perivascular hypertrophy and distention, and the intraoperative wound is prone to extensive bleeding. In addition, during the operation, patients need to change from the left lateral position to the right lateral position, which makes the operation more difficult (13).

At present, a variety of targeted drugs have been approved for the treatment of renal cancer, which can be roughly divided into: tyrosine kinase inhibitors (TKIs), vascular epidermal growth factor (VEGF) monoclonal antibodies, and mammalian target of rapamycin (mTOR) inhibitors according to the different targets of targeted drugs. TKI drugs have multiple effects such as inhibiting tumor angiogenesis and anti-tumor cell growth. The representative drugs include sunitinib, sorafenib, pazopanib and axitinib.

For patients with IVCTT, whether targeted drugs should be applied preoperatively or not varies greatly among the literature reports. Some scholars believe that the preoperative use of targeted drugs can improve the prognosis of patients, reduce the level of carcinoma thrombus and reduce the difficulty of surgery. Shuch et al. reported the successful renal cancer cases with high-level tumor thrombus, whom were treated with molecular targeted therapy before surgery, and then radical nephrectomy and inferior vena cava tumor thrombectomy were performed after tumor thrombus was degraded (16). Statistics show that the degradation of tumor thrombus accounted for 5–44%, the steady change accounted for 28–91%, and the progression accounted for 5–28% according to the past reports on using targeted drugs. Psutka et al. thought that early surgery was not recommended for patients with major surgical risks or distant metastasis, and first-line targeted drug therapy could be given firstly (17). Pazopanib, approved in October 2009 by U.S. Food and Drug Administration (FDA), is a new kind of tyrosine kinase inhibitors functioning by inhibiting the activity of VEGFR, PDGFR and c-KIT. Studies have shown that pazopanib and sunitinib have similar anticancer effects on the patients with advanced renal cancer, with relatively small adverse effects and high quality of life (18). After a full evaluation of the patient's condition and considering the request of the patient and his family members for active treatment, we treated the patient with pazopanib, and then controlled the local lesion by interventional embolization chemotherapy. Following up the patient for 2 years, we found that the left renal tumor decreased significantly, as well as the level of IVCTT degraded from III to II. Therefore, we decided to perform robotic assisted laparoscopic radical nephrectomy combined with thrombectomy of inferior vena cava tumor. Due to the heavy adhesion around the tumor after taking targeted drugs, which increases the difficulty of surgery, it is necessary to discontinue the drugs for more than 2 weeks before surgery (11,19).

Because it is difficult to expose the renal artery through abdominal surgery, and the existence of tumor thrombus makes it more difficult. Preoperative renal artery embolization can reduce bleeding and shorten the operation time during nephrectomy. Meanwhile, it can prevent intraoperative perfusion pressure from causing the movement of the tumor thrombus. Therefore, the renal artery was embolized the day before radical nephrectomy in this case. During the operation, it was found that the pulsation of the left renal artery was significantly weakened, that the perirenal fat formed edema zone, and that the kidney and tumor texture were relatively soft, which was easy to completely remove. The degree of tumor thrombus entering the vena cava does not change the prognosis of patients (20,21), and the invasion of the inferior vena cava wall is a risk factor for disease recurrence and poor prognosis (22). No invasion of the inferior vena cava wall was found in this case, so the inferior vena cava wall was not resected.

In this case, we reported the comprehensive management of a renal tumor patient with IVC tumor thrombus and multiple metastases. The patient received robotic-assisted RN and IVC tumor thrombectomy after preoperative neoadjuvant targeted therapy, and obtained considerable disease remission during the follow-up. Therefore, neoadjuvant therapy based on molecular targeted drugs plays a key role in the comprehensive management of advanced RCC patients with IVC tumor thrombus. It can reduce the tumor size, operation difficulty, and enable patients with advanced renal cancer to obtain surgery probability. However, the case we have reported has some limitations. Firstly, we reported too few cases, just one case, because it is very difficult to meet such patients. Secondly, the effectiveness of this combinative treatment remains to be seen or to be summarized by expanding the cases and the follow-up time.

Conflicts of Interest: All authors have completed the ICMJE uniform disclosure form (available at http://dx.doi.org/10.21037/tau.2019.12.13). The authors have no conflicts of interest to declare.