Urinary continence is one of main complications of radical prostatectomy (RP) (1). With a better understanding of the anatomy of prostate and its surrounding structures and improvement in technology and technical modifications, more than 80% of patients underwent RP could recovery urinary continence in 1 year after surgery (2). However, early recovery of urinary continence following RP is still poor, with more than 70% of patients requiring pads at 6 weeks after RP (2). Consequently, several surgical techniques have been described to improve early recovery of urinary continence after robot-assisted radical prostatectomy (RARP) (3). In 2010, Dr. Bocciardi and his colleagues firstly described Retzius-sparing robot-assisted radical prostatectomy (RS-RARP) (4). In this approach, anterior structures in Retzius space such as pubourethral ligaments, Santorini plexus could be preserved, therefore leading to better continence outcome early after RS-RARP (5). Recently, results from two randomized controlled trials further confirmed the effect of RS-RARP, providing level 1 evidence supporting an earlier return of urinary continence in patients underwent RS-RARP (6,7).

Several preoperative factors have been shown to be associated with early recovery of continence after RARP. Biological patient-related factors, such as advanced age, higher BMI, lager prostate volume, and severe preoperative prostate symptom have been reported to be risk factor for continence outcome after RP (8). Furthermore, preoperative anatomic variables measured on magnetic resonance imaging (MRI), such as membranous urethra length (MUL) and periurethral supporting structures, have also been demonstrated to be associated with urinary continence outcome after RP (9). However, literature regarding predictive factors of urinary continence following RS-RARP is limited. The association between recovery of continence after RS-RARP and anatomic parameters on preoperative MRI is total unknown.

The technique of RS-RARP we used was similar to the transperitoneal approach described by Galfano et al. (4,5) and Lim et al. (11). In patients with PSA <10 ng/mL, Gleason score <7, and clinical stages T1-2a, bilateral nerve was preserved. For nerve-sparing technique, bilateral intrafascial plane was undertaken according the surgical technique described by Galfano et al. (4). While those who did not meet the item did not retain the nerve. For patients at high risk of prostate cancer, extended lymph node dissection was performed. Adjuvant/salvage treatments, salvage radiotherapy is performed for patients with persistent PSA or biochemical recurrence. The catheter was removed between 7 and 10 days after operation, and discharged from hospital 3 to 5 days after operation. All patients were interviewed in the outpatient department every 3-month during the first year following RS-RARP to complete the questionnaire regarding urinary function or by telephone in case of missing questionnaires.

The sagittal T2-weighted FSE sequences allowed for minimal residual membranous urethral length (mRUL) to be measured parallel to the membranous urethra from the inferior edge of the levator ani muscle (LAM) to the superior margin of the bulbospongiosus muscle (12) (Figure 1A). Coronal T2-weighted sequences were used to measure peri-urethral sphincter complex (PSC) thickness, the thicknesses of the LAM, and obturator internus muscle (OIM) (Figure 1B). We measured PSC from the urethral midline to lateral margin of the converging LAM. We measured LAM from the extreme length converging on the urethra immediately caudal to the apex of prostate. And we measured OIM in its wider part. We measured membranous urethra in its wider part in the transected T2-weighted sequences before entering in the prostate and defined it as urethral wall thickness (UWT) (13) (Figure 1C). Measurements of the above MRI parameters were taken in a blind manner. All data were collected in centimeters with two decimal places. 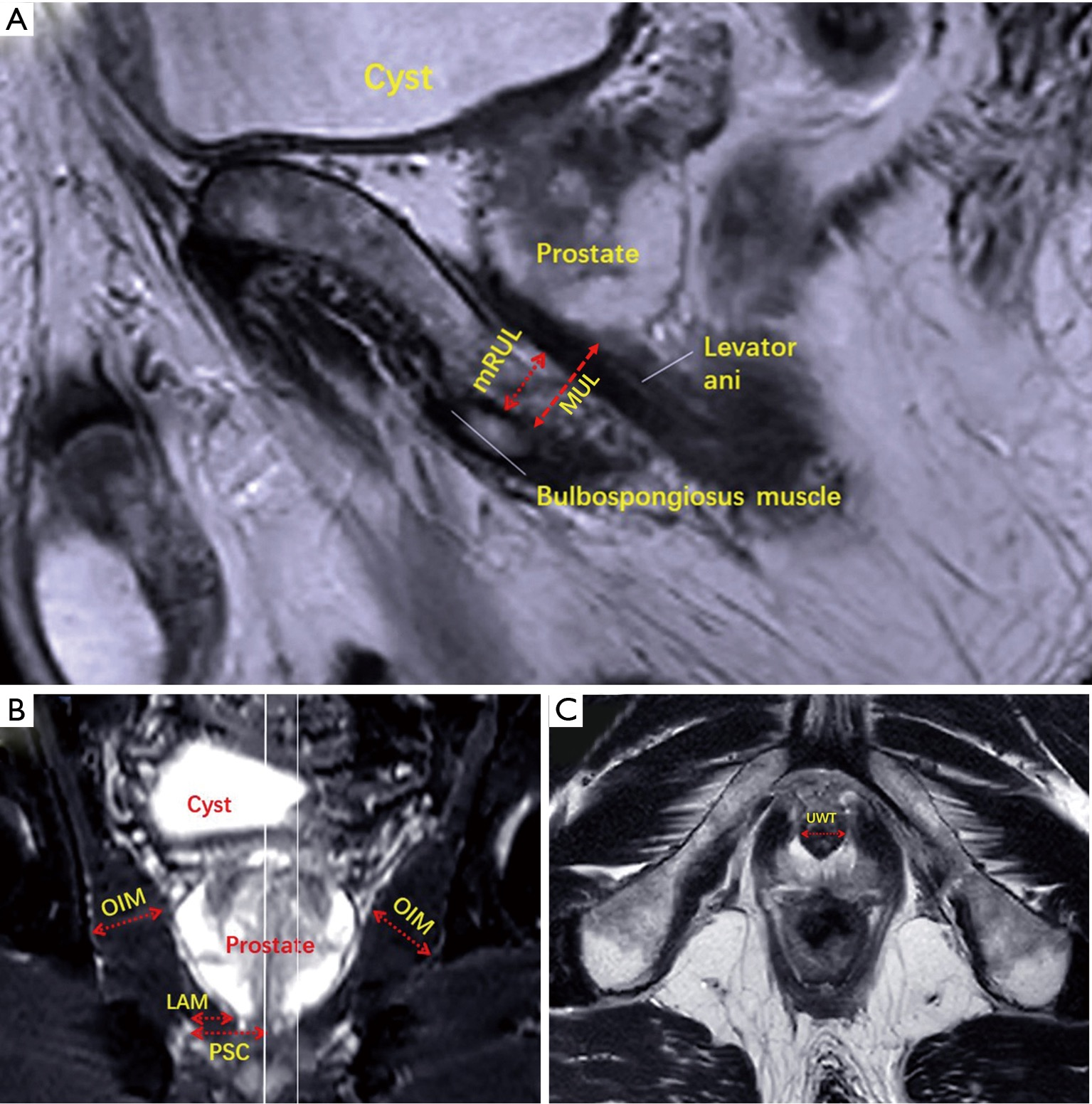 The Mann-Whitney U test was used for continuous data, and the chi-squared test or fisher exact test was used for categorical date. Continuous nonnormally distributed variables were presented as the median and interquartile range (IQR). Logistic regression analysis was applied for univariable and multivariable analysis to identify predictors of immediate urinary continence. All data analyses were performed using SPSS 21.0 statistical software (IBM SPSS, Chicago, IL, USA). A confidence interval (CI) of 95% was assumed, and a P value <0.05 was considered significant. 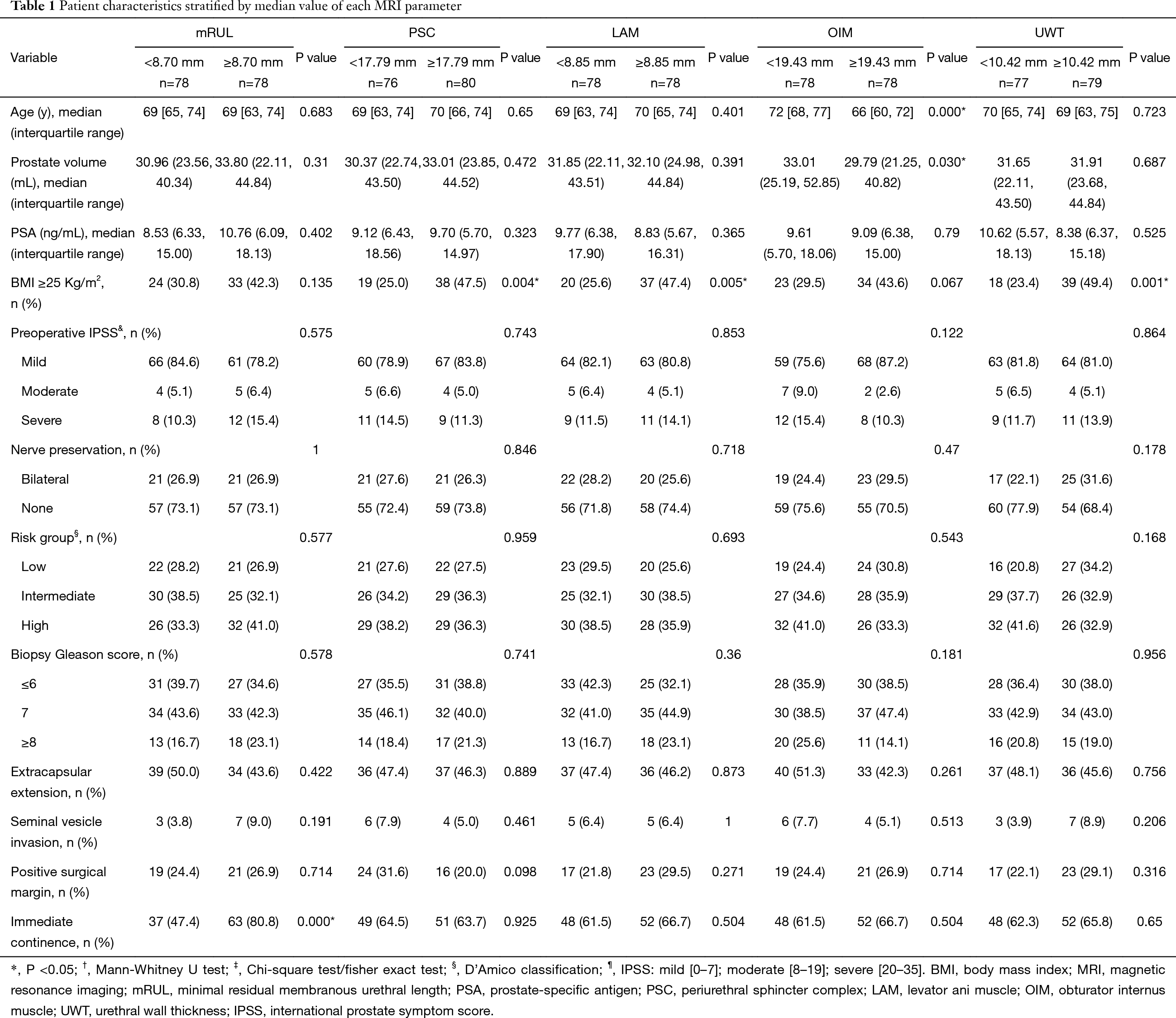 The result of this retrospective cohort study revealed that the rate of postoperative immediate urinary continence in patients with longer mRUL was significantly higher than in those with shorter mRUL. Multivariate regression analysis also confirmed that mRUL was an independent predictor of postoperative immediate urinary continence. To the best of our knowledge, this is the first study to explore the association between urethral parameters on preoperative MRI and postoperative urinary outcome following RS-RARP and to reveal that mRUL as an objective and quantitative predictor of immediate continence following RS-RARP.

RS-RARP was well demonstrated to be associated with improved recovery of early continence by several studies (5-7,15). The updated results from one published randomized controlled trial showed that differences in urinary continence observed early after surgery were muted at 12 months follow-up (15). Therefore, in the present study, we set immediate urinary continence as the primary outcome as described in two randomized controlled trials (6,7). In the present study, more than 50% of patients could achieve immediate continence after removal of catheter, revealing the advantage of RS-RARP in preserving urinary function. However, there is still part of patients could not return to immediate continence after surgery, leading to the anxiousness of patients due to the lack of information on predicting the status and duration of urinary incontinence. Therefore, it is important to identify possible predictors of continence early after RS-RARP, which could relieve the anxiousness of patients, as well as offer prognostic information to surgeons when counselling patients in clinical practice prior to surgery and when explaining a delay in continence recovery following surgery.

Given the recent advances that have led to the wider application of MRI for diagnosis and clinical staging of prostate cancer (16), many studies have shown the great correlation between anatomic variables such as preoperative MUL and periurethral supporting structures. In particularly, longer MUL has been considered to be significantly associated with better postoperative continence recovery following RP (13,17,18). MUL has been considered to be a prognostic risk factor for overall continence recovery including the early recovery after RP (9). Compare to those biological factors for predicting urinary continence, MUL is more objective and easy to quantify. Therefore, a comprehensive understanding of MUL is potentially of value to predict urinary continence after RP. However, there is no standardized method to measure MUL because it’s both boundaries are unclear on MRI. Furthermore, part of MUL would be damage during surgery. Therefore, Satake et al. proposed mRUL as a new parameter to reflect MUL (12). Compared to MUL, mRUL has clear boundaries on MRI, from the lower margins of the levator ani to upper margin of the bulbospongiosus muscles (Figure 1). Also, mRUL usually could be preserved without damage during surgery. Therefore, we applied mRUL in this study as a possible predictor of urinary continence following RS-RARP. The results showed that mRUL can be used as a novel predictor of immediate urinary continence after RS-RARP. It is easy to speculate that patients with longer mRUL can retain a complete longer urethral sphincter, resulting in high urethral closure pressure after RS-RARP (9). In the first paper describing RS-RARP, Dr. Bocciardi and his colleagues proposed that better urinary continence outcome following RS-RARP was theoretically due to the preservation of anatomical structures, such as Aphrodite’s veil, Santorini plexus, and pubourethral ligaments (4). From the results of the present study, it revealed that preservation of membranous urethra is still the basis of better urinary continence outcome. There was no significant difference in the rate of postoperative immediate urinary continence between long and short groups of other MRI parameters, indicated that they may have no correlation with immediate urinary continence after RS-RARP.

Several limitations need to be considered in this study. First, this was a single-institution research, and the cohort was comparatively small. Second, we used patient-reported pad usage to define the state of urinary continence, which was not an objective quantitative measurement. Finally, although surgery was performed by the same experienced surgeon using the same technique, the nuance of surgical techniques in each operation might have affected postoperative urinary continence. However, we believe that our study correctly reflect the importance of mRUL for immediate urinary continence after RS-RARP. When measuring the parameters by MRI, we did not know the patient’s postoperative urinary continence state, so there was no bias. Nevertheless, multicenter prospective studies are needed to validate the repeatability of our results.

Conflicts of Interest: All authors have completed the ICMJE uniform disclosure form (available at http://dx.doi.org/10.21037/tau.2019.12.17). The authors have no conflicts of interest to declare.

Ethical Statement: The authors are accountable for all aspects of the work in ensuring that questions related to the accuracy or integrity of any part of the work are appropriately investigated and resolved. All procedures performed in this study were in accordance with the Declaration of Helsinki and approved by the Ethics Committee of the Drum Tower Hospital, Medical School of Nanjing University. Because of the retrospective nature of the research, the requirement for informed consent was waived.