Minimizing surgical morbidity associated with radical prostatectomy has long been a goal of urologists. One of the most influential technical advances in the care of prostate cancer has been the introduction of the da Vinci surgical robotic platform (Intuitive Surgical, Sunnyvale, CA) which was first approved by the Food & Drug Administration (FDA) in 2000 (1). The use of robotic assistance in laparoscopic surgeries have been shown in the literature to reduce length of hospital stay and perioperative blood loss (2) and while a pure laparoscopic technique confers many of the same perioperative benefits, this approach represents a technically formidable operation with a steep learning curve which has limited its widespread adoption (3,4). While controversial, robotic prostatectomies may have improved erectile performance postoperatively, as well as superior rates of urinary continence when compared to other approaches (5-7).

Currently, robotic technology is widely utilized for many major urologic surgeries (8-10) and by 2013 was used in greater than 75% of prostatectomies in the United States (11). Since its initial release, several generations of the da Vinci robotic platform have been released with a shared design featuring multiple robotic arms with articulating surgical instruments and a laparoscopic camera under the control of a surgeon interface in a master-slave configuration. Previously surgeons reported utilizing custom built modifications to perform single site radical prostatectomy with multi-arm surgical robotic platforms as first described by White et al. (12) in 2010. However, the rigid instrumentation and need for modifications to the existing platform limited the widespread adoption of these single site techniques despite the potential advantages in reducing surgical morbidity including reduced surgical sites, improved cosmesis and reduced pain. In June 2018, the FDA approved a new robotic platform, the da Vinci Single Port (SP) system for urological surgery. The SP system represents a departure from previously available multi-port platforms as it features multi-articulating instruments and a flexible camera which are deployed in a single robotic trocar controlled by a single robotic arm as shown in Figure 1 and has led to a renewed interest in single site surgery. Some surgical centers have begun reporting their initial experiences for single incision operations with the platform in multiple urologic procedures, including radical cystectomy, partial nephrectomy, and radical prostatectomy (13-19). 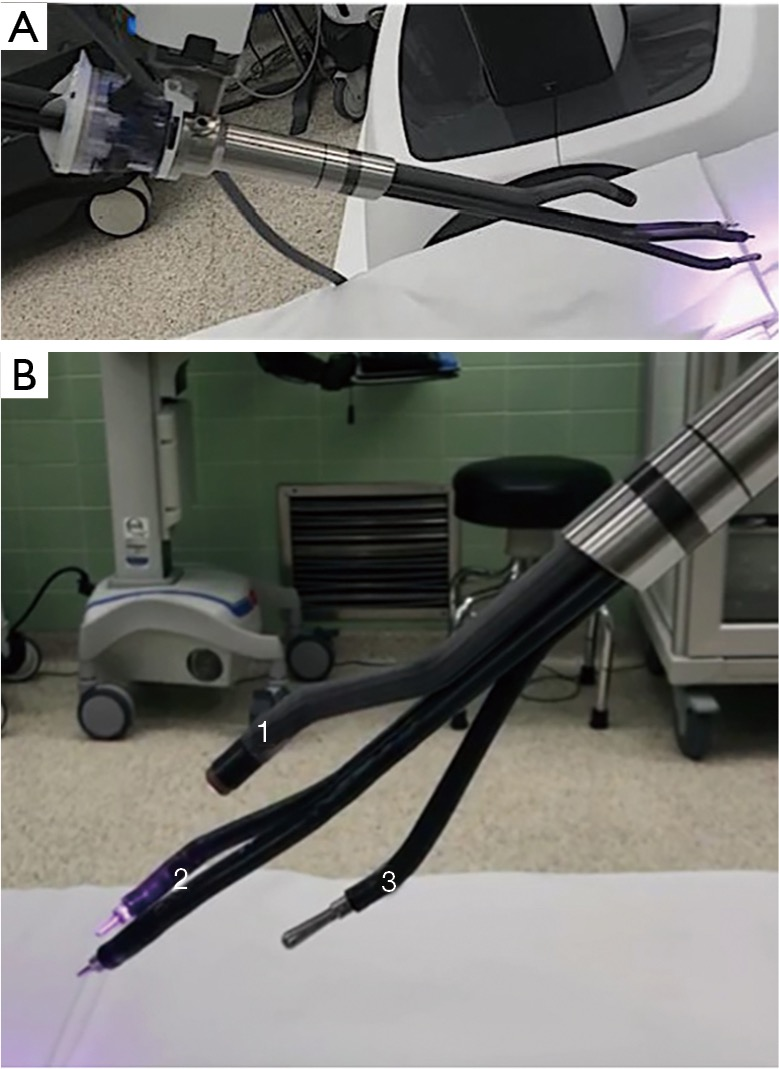 Figure 1 Images of the da Vinci System. (A) Side profile view of the arm; (B) demonstration of instrument articulation. 1, flexible endoscopic camera; 2, needle drivers; 3, Cadiere Forceps.

In this review, we aim to assess and summarize the available literature regarding patient outcomes using the SP system for radical prostatectomy in the surgical treatment for prostate cancer.

This systematic review was structured using the Preferred Reporting Items for Systematic Reviews and Meta-Analyses (PRISMA) guidelines (20,21). A meta-analysis was not performed given the significant heterogeneity of surgical techniques and likely publication bias given that all available studies originated from single center study designs with relatively small patient cohorts (22).

Any studies describing the use of any robotic platform, including da Vinci SP, Si, and Xi Platforms for robotic Single-Port or single site radical prostatectomy were eligible for inclusion in this systematic review. Studies were excluded if they included combined cases with other organ resection, represented use in a cadaveric model and not in a clinical setting, or described results for a simple prostatectomy technique in the treatment of benign prostatic hyperplasia. Studies were not excluded if they included other surgical procedures, so long as results were reported separately. There were no restrictions based on language, age, or region.

Data was independently extracted by 2 authors (A.L. & R.D.) after full text review of each article with disagreements resolved by consensus. No imputation of missing individual patient data was undertaken. Data was entered and stored in a Microsoft Excel (Redmond, WA) database.

The initial search retrieved 217 non-duplicate references that were screened by title and abstract. Among those, 28 were selected for full review. In total, 12 published studies met the pre-determined inclusion criteria. A flow chart of is summarized in Figure 2. All studies collected were single-institution case reports or case series. Data was available from 145 patients. 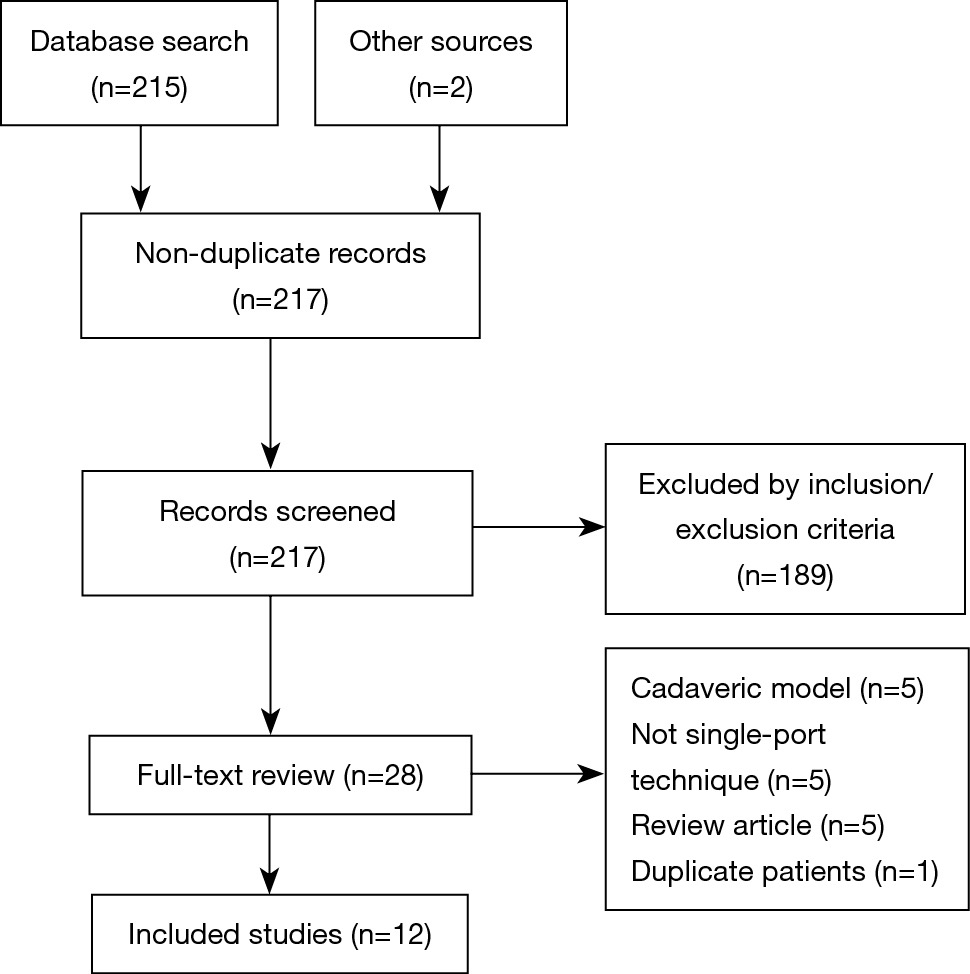 Table 1 includes studies with patients that underwent a single port prostatectomy with the da Vinci SP system and describes patient and disease characteristics. Four studies were identified that utilized the SP system. Study sample sizes reported in each case series ranged from 2 to 49 patients. Data was available from three of the studies. Studies reported continuous variables with medians or means using interquartile ranges or standard deviations, respectively. Prostate-specific antigen (PSA) was reported pre-operatively.

Table 2 describes outcomes including operative time, average blood loss, and mean hospital stay as well as if there were post-operative complications using the Clavien-Dindo Classification system for patients undergoing a prostatectomy with the SP system. No study reported a need for intraoperative conversion to open prostatectomy. Data was reported using either parametric or nonparametric summary statistics. Complications reported by Agarwal et al. were blood transfusions, postoperative ileus, and wound dehiscence with a Clavien grade 2 complication rate of 8%. Complications reported by Ng et al. were postoperative hematuria, ileus, urinary tract infection, wound infection, and atrial fibrillation with a 15% rate of Clavien grade 2 complication and 10% rate of Clavien grade 1 complication. Reported rates of positive surgical margins ranged between 20% (2/10), 28% (13/49) and up to 55% (11/20) in reported SP series (13,24,26).

A summary of patient and disease characteristics from each study is presented in Table 3. Sample sizes reported in each case series ranged from one through twenty patients. Data were available from all eight studies. 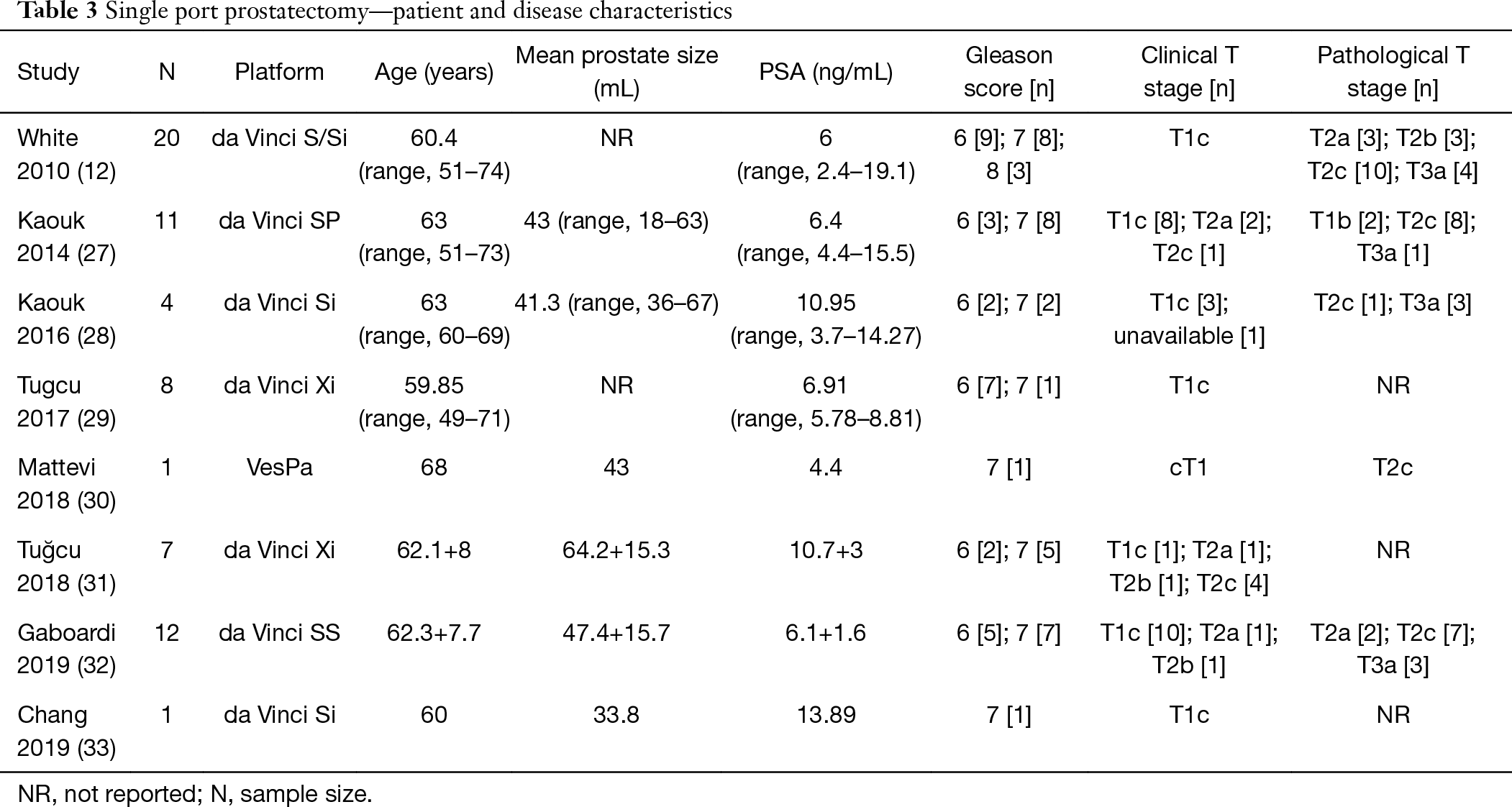 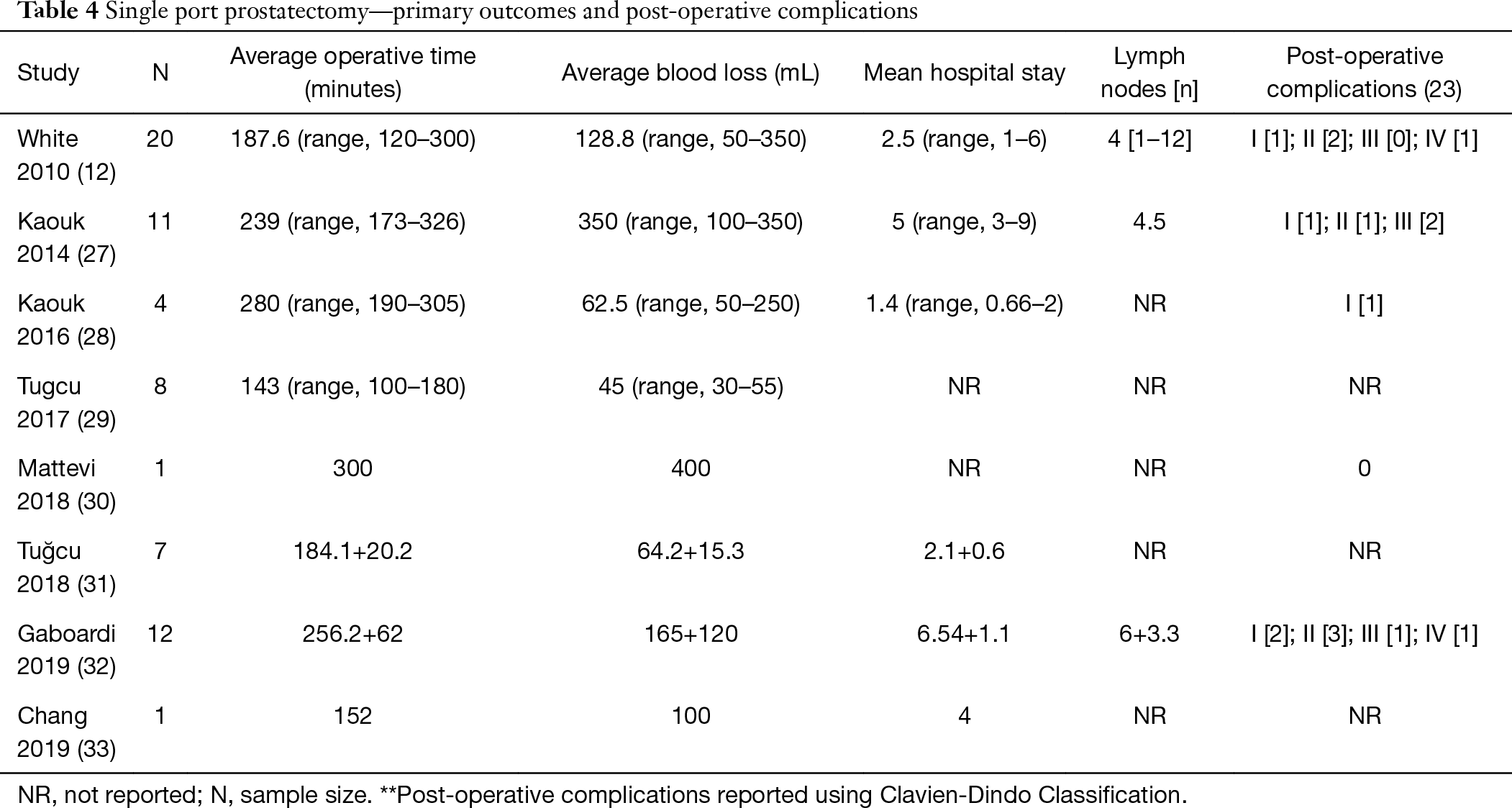 Based on the initial experiences across 8 surgical centers and 145 patients, single site robot assisted radical prostatectomy either by perineal or transabdominal approach appears to represent a safe and feasible modality for the treatment of prostate cancer. Overall, these series reported few postoperative complications, and mean hospital length of stay appears to be in line with previously published robotic prostatectomy series (34). Operative times and estimated blood loss appear to be variable, but again are consistent with studies for multi-port robotic techniques during the initial transition from open to robotic radical prostatectomy (35). Potential advantages of the SP system include a reduced number of surgical incisions, improved cosmesis, reduced pain and improved surgeon visualization during critical portions of the operation with the utilization of the flexible camera. Some of these potential advantages such as cosmesis reflect a subjective outcome which is of unknown benefit in the radical prostatectomy patient population. Previously, Park et al. (36) reported improved cosmetic outcomes for single site laparoscopic surgery outcomes following renal surgery and noted improved outcomes for single site operations as compared to traditional laparoscopic or open incisions. However, they also noted that younger patients undergoing operations for benign disease had a stronger preference for single site operations and as such, these findings may not apply to an older oncological patient population. As such, these single site approaches may be more beneficial for younger patients undergoing reconstructive operations (37,38).

Despite these potential advantages, there are some concerns regarding use of the SP platform. One concern with the use of the SP system is the learning curve that led to higher rates of positive surgical margins, which was described in several studies (24,26,39). However, this does not deviate from expected learning curves seen in multi-port robotic modalities (40) and will require further longer term follow up. Additionally, there are significant potential costs associated with both the initial purchase and ongoing maintenance of surgical robotic platforms (1), if a new technology is merely duplicating the existing available technology without improving surgical or patient outcomes, then it is unlikely to represent a cost-effective surgical treatment.

As the current available body of literature represents a heterogenous sample of initial results from a selected patient population with experienced robotic surgeons, these results should be interpreted with caution before widespread adoption of these techniques. Limitations of these studies are short term follow-up and small sample sizes. These studies do not evaluate oncologic or functional results with urinary and sexual outcomes. All the studies are case series reported with their respective single center design. Overall, the quality of the body of evidence available for single site robotic prostatectomy is weak and additional multi-center studies with more rigorous follow up will be necessary to evaluate the benefits and drawbacks of single port or single site techniques. While previous feasibility studies (12,27) demonstrated that these approaches were possible and safe with these techniques, in general these techniques were not widely adopted due to the technical difficulty and customized equipment necessary to successfully perform single port robotic techniques. The introduction of the new da Vinci SP system built specifically for this purpose presents an opportunity for greater usage of less invasive surgical techniques, as well as a second chance to rigorously evaluate the benefits of this new technology with well-designed clinical trials.

Given the widespread adoption of the multi-port system for radical prostatectomy, there may be difficulty directly comparing SP to open radical prostatectomy (41) but we would anticipate opportunities for studies comparing between multi-port and SP outcomes. One limitation these authors acknowledge is that single site and single port laparoscopic robotic-assisted prostatectomy will still, in most circumstances, require a laparoscopic assistant port. Continued iterative improvements and technological advances may be on the near horizon for better instruments with improved suction or retraction to obviate the assistant and enable true single-port technique. Furthermore, FDA approval of other single arm surgical robots may offer parallel avenues of innovation for less invasive robotic surgery. As Intuitive Surgical has had a near-monopoly of the field of surgical robotics since the release of the da Vinci system, these competitors could provide a welcome contribution to spur further innovation and exert competitive price pressures (42).

Single-port techniques appear to represent a safe and feasible approach for performing minimally invasive radical prostatectomy. Initial results regarding perioperative data are encouraging for the continued use of these approaches and additional well-designed studies with long term oncologic and functional results will be necessary to critically evaluate the role of single port radical prostatectomy going forward.

Conflicts of Interest: The series “Robotic-assisted Urologic Surgery” was commissioned by the editorial office without any funding or sponsorship. Dr. Crivellaro is a consultant for Intuitive Surgical, Inc. The other authors have no other conflicts of interest to declare.