Renal cell carcinoma (RCC), accounting for approximately 2–3% of all malignancies in adults, is considered as the seventh most common cancer in male and the ninth most common cancer in female (1). There are approximately 209,000 new cases and 102,000 deaths reported each year worldwide (2). Recently, the detection rate of RCC has grown with the increasing use of cross-sectional imaging, resulting in a great number of accidentally diagnosed small RCCs with lower histological grades and lower possibility of metastases (3-6).

Traditional surgical treatment of renal tumors has undergone a transformation in the past decade (7). Previously, partial nephrectomy (PN) was shown as a common surgical procedure for the treatment of T1 renal tumors (8,9). But in recent years, novel minimally invasive procedures [e.g., radio frequency ablation (RFA)] have been increasingly applied (10). The principle of RFA is to destroy the tumor tissues with heat and desiccation by radio frequency current, which can be performed through open incisions, laparoscopic or percutaneous routes under image guidance [i.e., ultrasound (US), magnetic resonance imaging (MRI), computed tomography (CT)] (11-13).

However, elderly patients with T1a stage (defined as a tumor 4 cm or less, confined to the kidney) or patients who cannot undergo a surgery are more appropriate for minimally invasive surgery of RFA to avoid unnecessary surgical complications (14). Furthermore, high temperature of RFA may bring about some side effects, such as inadvertent injury of non-target tissues. In consequence, the efficacy and safety of RFA in the treatment of T1 renal tumors remain controversial. Therefore, we performed a systematic review to compare outcomes (include long-term survival rates, complication events and renal function changes) of RFA versus PN in the treatment of T1 renal tumors.

Several electronic databases were searched to identify relevant literature including PubMed, EMBASE and Web of Science with a deadline of March 30, 2019. Basically, only studies published in English were included in this systematic review. For the literature retrieval, the following key words were utilized: (“percutaneous ablation”, or “radio frequency ablation”), (“partial nephrectomy”, or “nephrectomy”), and (“T1 renal cell carcinoma”, “T1 renal tumor”, or “T1 renal masses”). In order to minimize the omission of the study, we manually screened the list of references for eligible studies to obtain more publications. A flow diagram of the study selection process is presented in Figure 1. 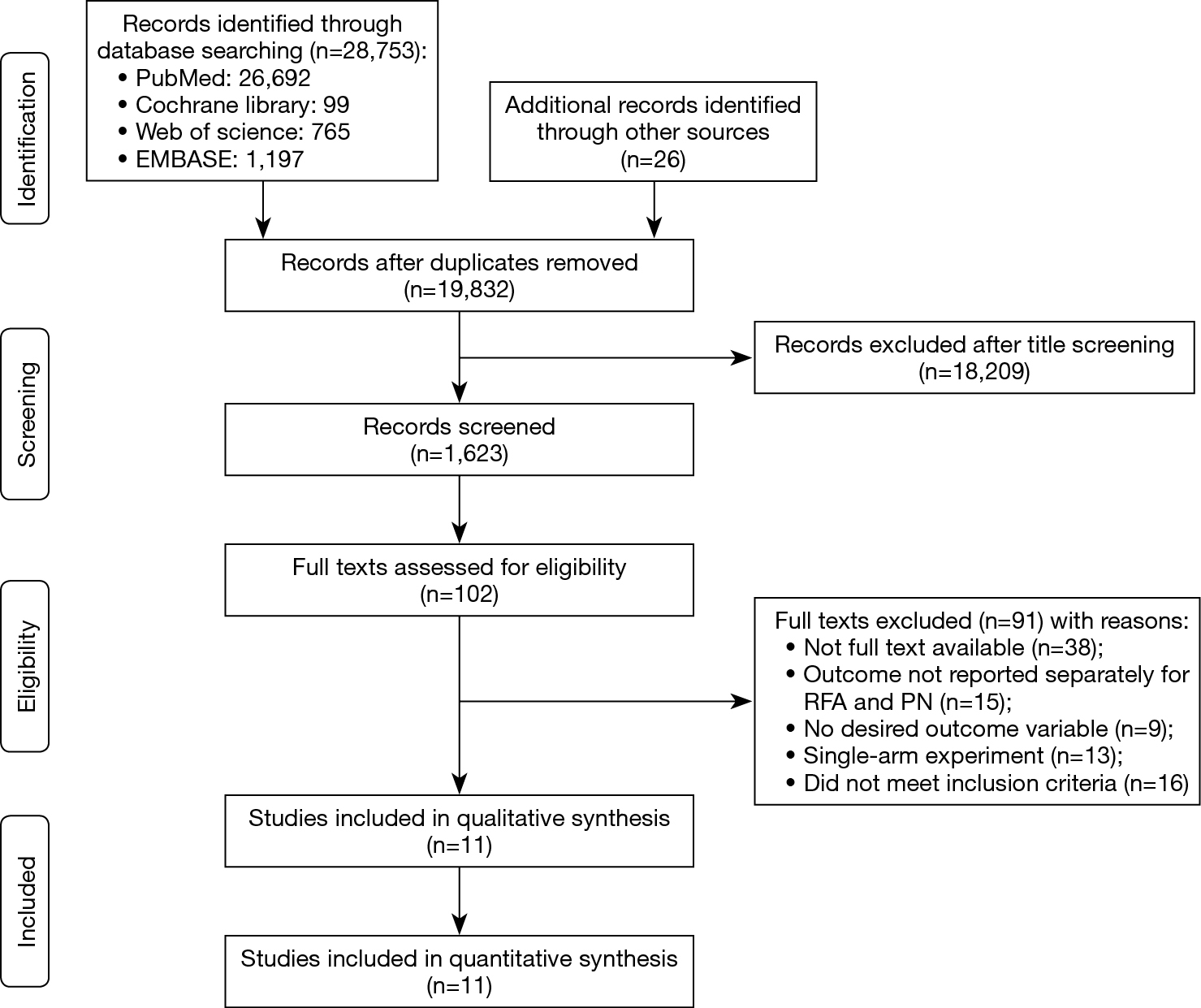 Eligible studies should meet the following criteria: (I) studies comparing the outcomes between RFA and PN in T1 renal tumors; (II) data obtained in different studies did not overlap. Instead, the exclusion criteria were displayed as follows: (I) studies consisted no usable data of outcomes of RFA versus PN in the treatment of T1 renal tumors; (II) studies had overlapped data; (III) reviews, abstracts or animal studies.

Newcastle-Ottawa Scale (NOS) was used to evaluate the quality of articles included. All 11 studies were evaluated strictly and scored at least 7 points (Table 1). 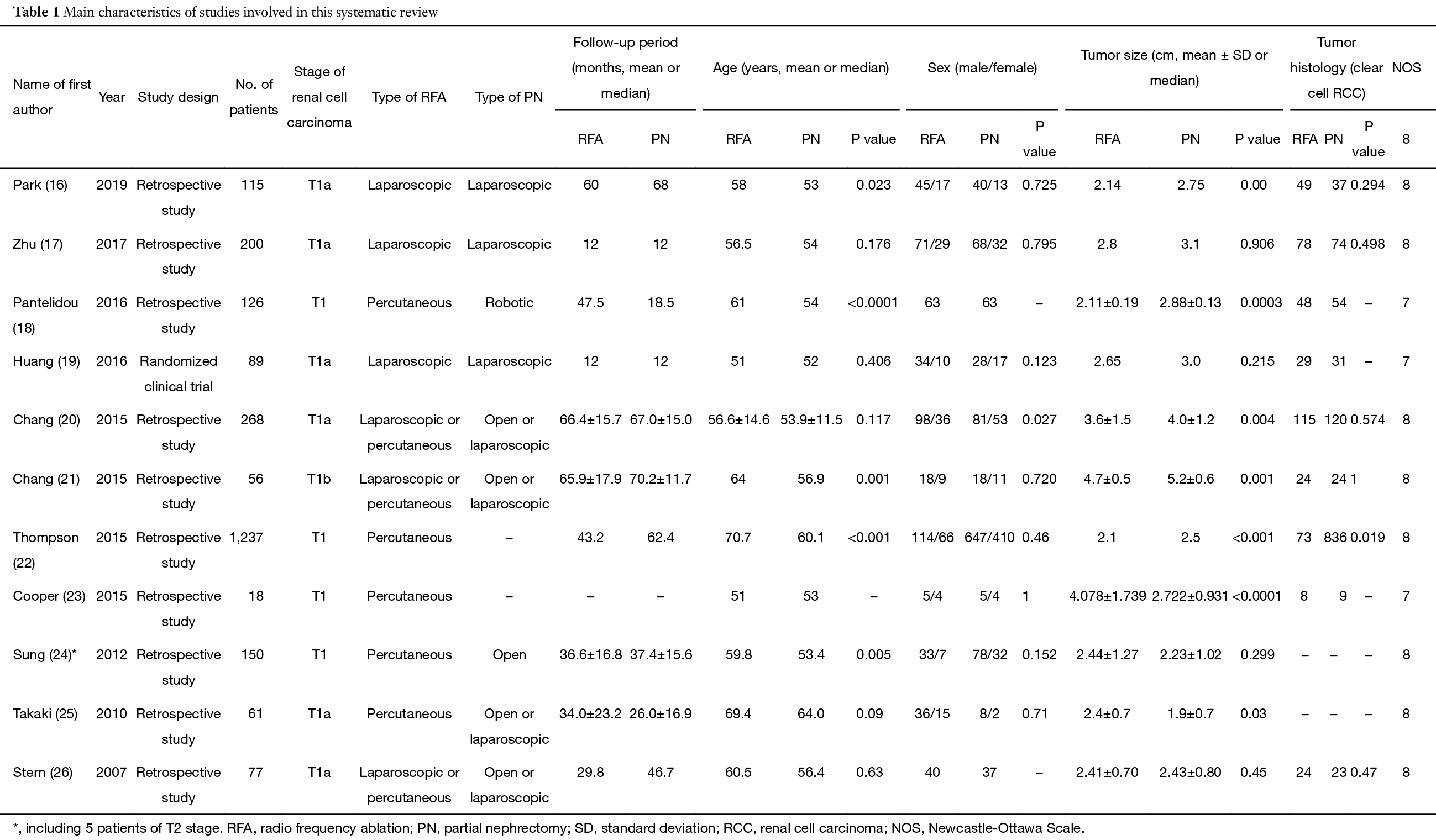 A total of 11 relevant studies (16-26) were finally included in this systematic review, including 2,397 patients with the average age of 59.07. The characteristics of patients receiving RFA or PN treatment are displayed in Table 1. The summary results indicated that most patients in the RFA group were visibly older (16,18,21,22,24). Five studies showed smaller tumor size in RFA group than those in the PN group (16,18,20-22), while two studies show larger tumor size (23,25). However, no statistical differences were observed in gender (16,17,19,21-25). 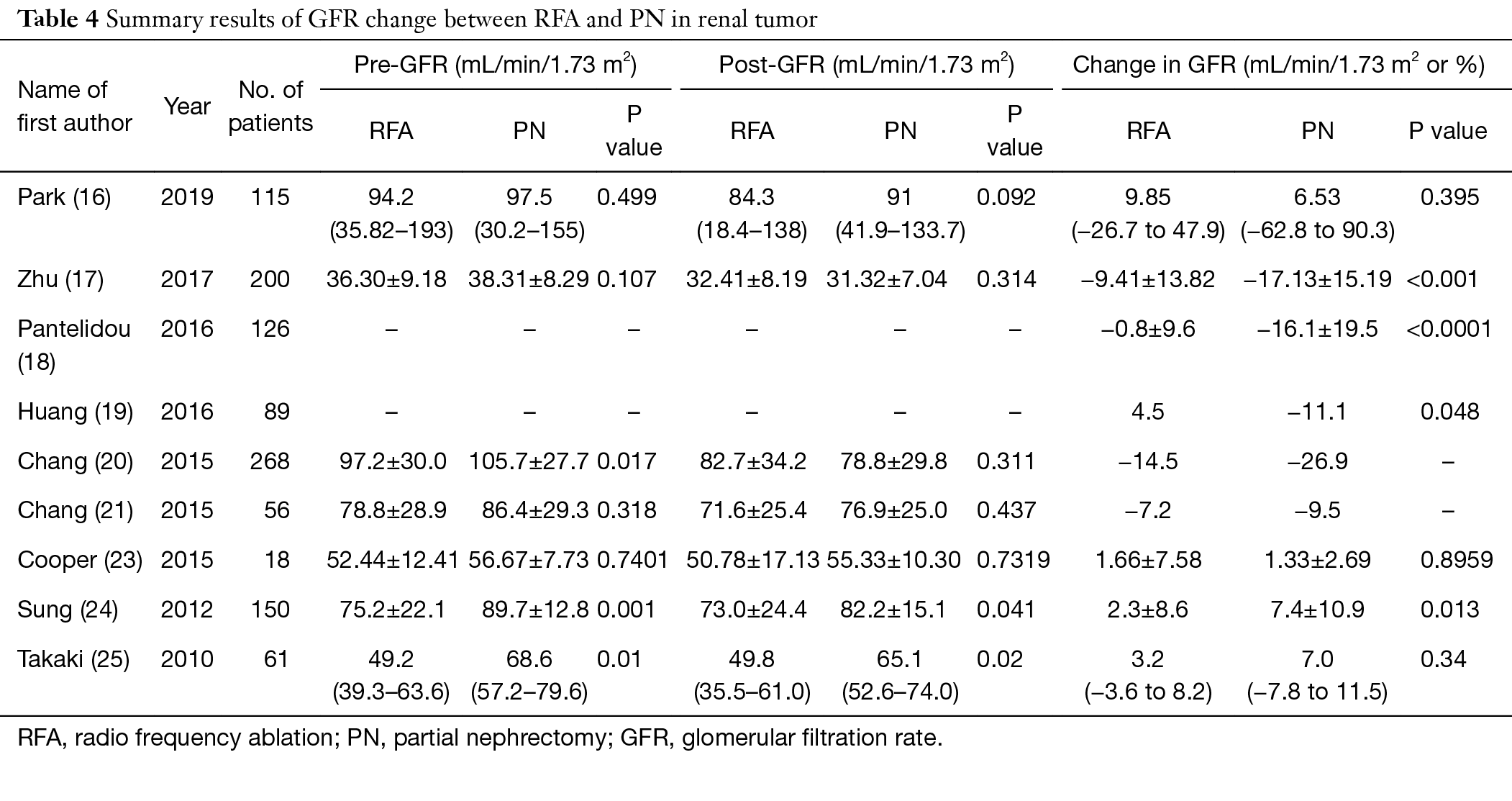 With the advancement of nephron-sparing technology, traditional surgical procedures have been challenged by new minimally invasive ablation, such as RFA, microwave ablation and cryoablation (27,28). Several previously published studies have demonstrated that RFA was an alternative treatment for T1 RCC with acceptable midterm results and lower risk of complications (29). Nonetheless, there were still several studies revealing that RFA had the risk of perforation, fistula and stenosis (30). They suggested that these risks can be avoided by non-ablative treatment. Therefore, the safety and long-term tumor efficacy of RFA remained controversial. Compared with individual studies, systematic reviews can provide comprehensive and reliable results and help explain controversial conclusions. For this reason, we conducted a systematic review to explore whether RFA has significant benefits for small renal tumors compared with PN.

The primary limitation of individual studies is lack of observation concerning long-term prognosis of RFA, including local recurrence rate and long-term survival rate. Our results demonstrated that RFA played a positive but similar role in long-term survival compared with PN. Nonetheless, the overall survival rate of PN group was obviously higher in Thompson’s research possibly because of the selection bias (22). In their study, patients treated with PN were significantly younger (P<0.001) and had lower Charlson scores (P<0.001) than those treated with RFA. Furthermore, Sung et al. reported that since the ablation edge of RFA is unclear on unenhanced CT, it is difficult to determine whether the tumor edge is sufficiently ablated during RFA surgery (24). They suggested that if the surgery is performed by less experienced operators, it may result in postoperative residual and recurrence. As a result, the operator experience might have a certain impact on the recurrence-free survival of RFA.

In our study, the complication rate in RFA group was equivalent to that described in PN group. Urinary complications and bleeding were the primary complications of RFA. The goal of RFA is to induce temperatures between 50 and 100 °C throughout the tumor tissue. Irreversible cell damage resulting from high temperatures in RFA treatment may lead to the injury of urinary tract, microvasculature and arterioles, causing the above-mentioned complications. Previous studies revealed that the use of renal pelvis perfusion might reduce the risk of ureteral injury (31). Nevertheless, it might cause inadvertent damage to nerves simultaneously.

It is well known that renal function preservation is another important goal for patients with small renal tumors. Our results indicated that most patients had a smaller decline in renal function after RFA compared with PN method (17-19,24), while another three studies concluded that RFA had a similar benefit as PN in renal function preservation (16,23,25). In these three studies, the mean tumour size (2.14, 4.078, 2.4 cm) treated by RFA were significantly larger than those (2.75, 2.722, 1.9 cm) treated by PN. The researchers failed to match for tumour size in their study. As mentioned previously, tumor size was regarded as a significant indicator of the outcomes of patients with RFA. Therefore, lack of matching tumor size may reduce the accuracy of the results to a certain extent. Furthermore, retained renal parenchyma and warm-ischemia time (WIT) play important roles in affecting postoperative renal function (32). Krokidis et al. (33) revealed that RFA did not require clamping the main renal artery, thus eliminating the WIT required for all types of surgical removal of the kidney mass. Therefore, RFA therapy might be superior to PN in preserving renal function.

Admittedly, there are still several limitations in our review. First, we only enrolled 11 articles which focused on the outcomes between RFA and PN in T1 renal tumors. With an increasing number of clinical studies being published, more high-quality studies could be enrolled to strength our conclusion. Second, our systematic review was composed of 11 individual articles with different contents, which might result in limited statistical validity and scattered results. Third, other information besides tumor size and histology (e.g., tumor location and ethnicity) was not available in most studies. Fourth, Sung’s study (24) included five RCC patients of stage T2, which might cause a slight bias. However, due to limited number of studies comparing these two methods, they were also included in this analysis. More studies with high-quality are required in the future to get more accurate results.

In conclusion, RFA is an effective treatment option which requires enough training and sufficient experience. Despite of its postoperative complications, the advantages of RFA are evident. For patients with T1 renal tumors, it could provide comparable long-term oncologic outcomes to PN and promote renal function preservation. Nevertheless, further studies are required to draw a more accurate conclusion.