African Americans (AA) constitute about 12% of the USA population (1). It has been estimated that AA patients presenting with renal cell carcinoma (RCC) are more likely to present with localized disease as compared to Caucasians at diagnosis. However, prior studies have demonstrated that AA race is associated with worse survival outcomes (2-5). This fact may be attributed to differences in tumor biology (6), socioeconomic status or functional outcomes (7). Additionally, AA have a higher probability of developing chronic kidney disease (CKD) at a younger age relative to Caucasians and are also more likely to present with comorbidities such as diabetes and hypertension (8).

It is common knowledge that the blood pressure lowering efficacy of renin-angiotensin system (RAS) inhibitors is attenuated in African Americans. This is due to a higher prevalence of salt sensitivity, which is defined as an increase in blood pressure in response to sodium or salt intake and is commonly associated with a low circulating renin profile (9). Therefore, inhibitors of the RAS are often not recommended as initial antihypertensive therapy. The reasons behind this phenomenon have not been fully explored but may likely be linked to socioeconomic status, lifestyle choices, environmental, and biologic/genetic factors that may contribute broadly to racial/ethnic differences in outcomes, as well as in response to therapeutic intervention (10). Wilson et al. hypothesized that the slave trade from Africa to the Americas led to extreme volume depletion and cardiovascular collapse during the journey due to diarrheal diseases and limited access to water. These extreme conditions favored the survival of people who were avid sodium retainers and accelerated gene selection for sodium retention (11). Given this racial disparity and the implications of the kidney function after partial nephrectomy on the overall survival and cancer specific survival (12,13), we aimed to determine the functional outcomes of AA patients were undergoing RAPN.

We retrospectively reviewed a multi-institutional database of 1,150 patients who underwent RAPN. Patients with missing data were excluded from the analysis [Charlson Comorbidity Index (CCI), n=17 and RENAL nephrometry score, n=134]. Overall, 999 patients were considered for further analyses. All patients were operated on by six expert surgeons from six different institutions and had complete clinical, perioperative and relatively short-term outcome data. Overall, there were 63 AA patients (6.3%), who were matched (1:3) to Caucasians by age at surgery, gender, CCI and RENAL nephrometry score.

Estimated GFR was calculated according to the Chronic Kidney Disease Epidemiology Collaboration formula (14). To investigate kidney function after robot-assisted partial nephrectomy (RAPN), two outcomes were selected: (I) AKI defined according to the risk/injury/failure/loss/end-stage (RIFLE) criteria (>25% reduction in preoperative baseline eGFR or >1.5-fold increase in preoperative creatinine, both at discharge from hospital) (15) and (II) eGFR reduction of >25% from baseline between 3 and 15 months after RAPN. This eGFR threshold was chosen based on the National Institute for Health and Care Excellence guidelines for CKD (16). Covariates included in the analyses included age, race, gender, BMI, diabetes and hypertension, CCI, baseline eGFR, RENAL nephrometry score and ischemia time.

Descriptive statistics were performed to determine the distribution of the overall population stratified by race. Continuous variables were reported as median and interquartile range and compared by the Kruskal-Wallis test. Categorical variables were reported as frequencies and percentages and were compared using Fisher’s exact test or chi-square test, as appropriate.

We performed univariable and multivariable analyses to evaluate predictors of AKI.

The incidence rate of significant eGFR reduction in AA and Caucasian patients was estimated nonparametrically using the Kaplan-Meier method. Finally, multivariable semiparametric Cox regression analyses were performed to assess predictors of significant eGFR reduction during follow-up. Statistical analyses were conducted using R (for matching patients) and Stata 14 (for all other analyses). An α level of 0.05 was used for evaluating statistical significance.

Descriptive characteristics of 252 patients included for analysis are shown in Table 1. There were no significant differences between AA and Caucasians in age at surgery, gender, body mass index, CCI, baseline eGFR, CKD stage based on eGFR, RENAL nephrometry score, ischemia time and AKI. However, AA were more likely to have hypertension (58.7% vs. 35.4%, P=0.001). 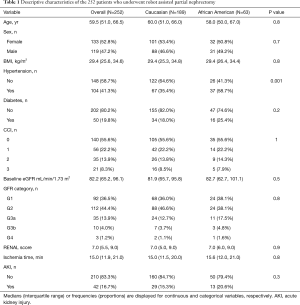 Overall 42 patients (16.7%) developed AKI after surgery and 35 patients (13.9%) developed significant eGFR reduction between 3 and 15 months after RAPN. Median follow-up of patients who did not develop significant eGFR reduction was 12.35 months. Univariable and multivariable logistic regression predicting AKI after RAPN are shown in Table 2. In the univariable analyses, only hypertension (OR =2.44, P=0.010), diabetes (OR =2.78, P=0.006), and ischemia time (OR =1.05, P=0.016) were found to be predictors of AKI. After adjusting for these covariates in multivariate analysis, AA race did not emerge as a significant factor for predicting AKI (OR 1.10, P=0.8). Rates of significant eGFR reduction between 3 and 15 months after RAPN are shown in Figure 1. There was no significant difference between African Americans and Caucasians (P=0.9). 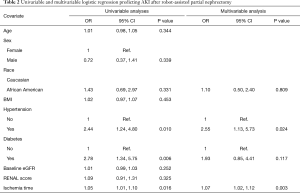 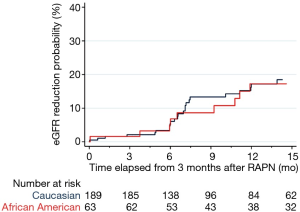 The role of race, AKI, diabetes, and hypertension were investigated using multivariable Cox regression analyses, and only AKI was found to be associated with significant eGFR reduction between 3 and 15 months after RAPN (HR 2.49, P=0.019) (Table 3). 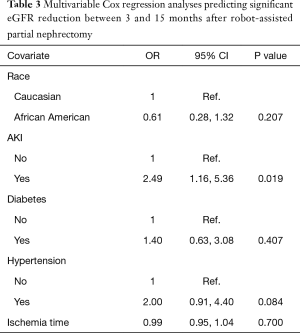 In the last decade, there has been a paradigm shift towards a more conservative approach for the treatment of small kidney tumors. Partial nephrectomy, by means of the open or the robotic approach, currently represents the standard of care treatment for T1 renal cancer. African American patients are reportedly more likely to be diagnosed earlier with localized RCC as compared to Caucasians. However, they paradoxically tend to have worse prognosis in terms of functional and oncological outcomes. This may partly be attributed to differences in tumor biology (6,17), socioeconomic status or functional outcomes (12,13). Since several studies have shown that functional outcomes and kidney function after partial nephrectomy impacts overall and cancer specific survival, we aimed to compare functional outcomes between African American and Caucasian patients. After matching the two populations for comorbidities and anatomy and dissection complexity, we found that African Americans have similar risk of AKI after surgery and significant eGFR reduction within 3 and 15 months of follow-up.

Kara et al. reported similar results showing no significant differences in the median percentage of eGFR preservation at one-year follow-up in 84 AA patients undergoing RPN (18). However, these results may be limited by the methods used as the authors performed a matched-paired analysis of AA and Caucasians by age, preoperative eGFR and R.E.N.A.L score comparing median percentage of eGFR preservation at one-year follow-up. To control for this in our study, we performed a multivariable semiparametric Cox regression analyses to predict a time dependent outcome. Moreover, we were able to take into account several known confounders such us ischemia time, AKI and hypertension which have been found to be significant predictors of worse functional outcomes (19-21).

Conflicting results are reported by Wang et al., who found a significantly higher increase in serum creatinine at discharge among 105 AA patients who underwent RPN (0.44 vs. 0.33 mg/dL, P<0.001) (22). However, the author did not take into account that AA patients were significantly more likely to be affected by diabetes and hypertension. Adjusting for these comorbidities, we found no major differences in the risk of developing AKI after surgery.

If the results of our findings are confirmed by future larger studies, racial disparities in survival outcomes of RCCs should be investigated with respect to differences in socioeconomic status and treatment or differences in tumor biology. Previous reports suggest that factors including a higher prevalence of hypertension, smoking, alcohol use and lack of access to care underlie this survival disparity (4,5,23).

Tripathi et al. examined survival rates of African Americans and Caucasians who were diagnosed with metastatic kidney cancer and enrolled in clinical trials. Randomizing the population minimized bias towards access to care, compliance, and performance status. However, AA patients continued to have a 44% greater risk of death when compared with Caucasian patients with metastatic RCC (24). The reasons for the differences in outcome are unknown but variations in pathologic, genetic and immunologic tumor characteristics may play a relevant role. Molecular alterations commonly associated with better prognosis of RCC have been found to be less prevalent in the African American population. AA patients with clear cell RCC have less frequent VHL inactivation and have decreased up-regulation of HIF-associated gene signatures than white patients. These genomic differences would predict decreased responsiveness to VEGF-targeted therapy and are a biologically plausible contributing factor to the worse survival of AA patients with clear cell RCC (17). Distinct tumor biology with differential expression patterns were also observed in AA patients with papillary RCC (6). To the best of our knowledge, this is the first multi-center study comparing African American and Caucasian risk of developing AKI and significant eGFR reduction after RAPN.

The relationship found between eGFR and overall survival, specifically cancer specific mortality, indicates that renal function has an oncological role in patient survival following surgery for RCC. However, the present study demonstrates that similar perioperative and intermediate term renal function outcomes are achieved in African American and Caucasian patients following RPN, even after accounting for the presence of hypertension and diabetes.

Limitations to this study include the relatively small sample size, the retrospective nature of the study, and the fact that these surgeries were performed by different urologists, which may introduce variability among patient outcomes.

Conflicts of Interest: The series “Robotic-assisted Urologic Surgery” was commissioned by the editorial office without any funding or sponsorship. AKH served as the unpaid Guest Editor of the series and serves as the unpaid editorial board member of Translational Andrology and Urology from May 2019 to Apr 2021. DD Eun: Intuitive Surgical (educational support/honoraria) and Conmed (research grant) – Ronney Abaza; Intuitive Surgical (speaker and consultant), Conmed (research grant), CSATs (consultant advisory board), Ceevra (advisory board) – James Porter; Intuitive (consulting research/speaking), Research Janseen and Genome Dx. The other authors have no other conflicts of interest to declare.