Urethral stricture disease is a heterogenous entity that can afflict men at any stage of life (1,2). Endoscopic management has traditionally been the mainstay of urethral stricture treatment due to ease of urethral dilation, but multiple studies have demonstrated that urethral dilation is neither clinically nor cost-effective (3-5). Additionally, self-dilation to maintain urethral patency has been associated with poor quality of life, especially in younger men (6). Since the superiority of urethroplasty relative to dilation in the management of urethral stricture disease is now well-established (3), understanding factors that contribute to urethroplasty success or failure is a topic of active research.

Many studies have evaluated urethroplasty outcomes in the context of stricture characteristics, such as location and length, and underlying patient co-morbidities. Several have recently investigated advanced age as a predictor of urethroplasty outcomes for both anastomotic and substitution repairs. The Trauma and Urologic Reconstructive Network of Surgeons (TURNS) recently found similar outcomes from urethroplasty regardless of age, with greater than 90% success amongst older patients at one year (7). We have previously reported outcomes for older men undergoing urethroplasty and found that at 5 years, greater than 70% remained stricture-free (8). Together, these findings support that urethroplasty can be performed safely and effectively in elderly men with appropriate patient and procedural selection.

We hypothesize that younger men fare better than older patients following urethral reconstruction in our tertiary referral practice. We postulate that this may be due more favorable tissue characteristics, such as increased androgen induced vascularity. Additionally, we suspect that younger men tend to have different stricture etiology compared to older men, creating a distinct milieu for reconstruction. We surmise that younger men present for reconstruction more efficiently and with fewer prior endoscopic interventions compared to older men, simplifying their eventual repair. In this study, we set out to evaluate outcomes in our younger patients undergoing urethroplasty and identifying factors which may influence outcomes from reconstruction.

After institutional review board approval, we performed a retrospective medical record review of all patients who underwent urethroplasty at our tertiary referral center by a single reconstructive urologist from 2007 to 2017. Patients who had bulbar urethral stricture disease were identified and age-stratified into cohorts ≤40 and >40 years old. Demographic, clinical, operative, and outcomes data were analyzed by urethroplasty database and electronic medical record (EMR) review. Urethroplasty success was defined by functional emptying and lack of need for further endoscopic or open re-operative management. Parameters correlated with urethroplasty failure were included in multivariate logistic regression models.

The Wilcoxon rank sum test was used to determine differences in success rates between the two age groups. A multivariable logistic regression model was used to test for significant predictors of urethroplasty failure. All analyses were carried out using JMP™ by SAS (Cary, NC, USA). 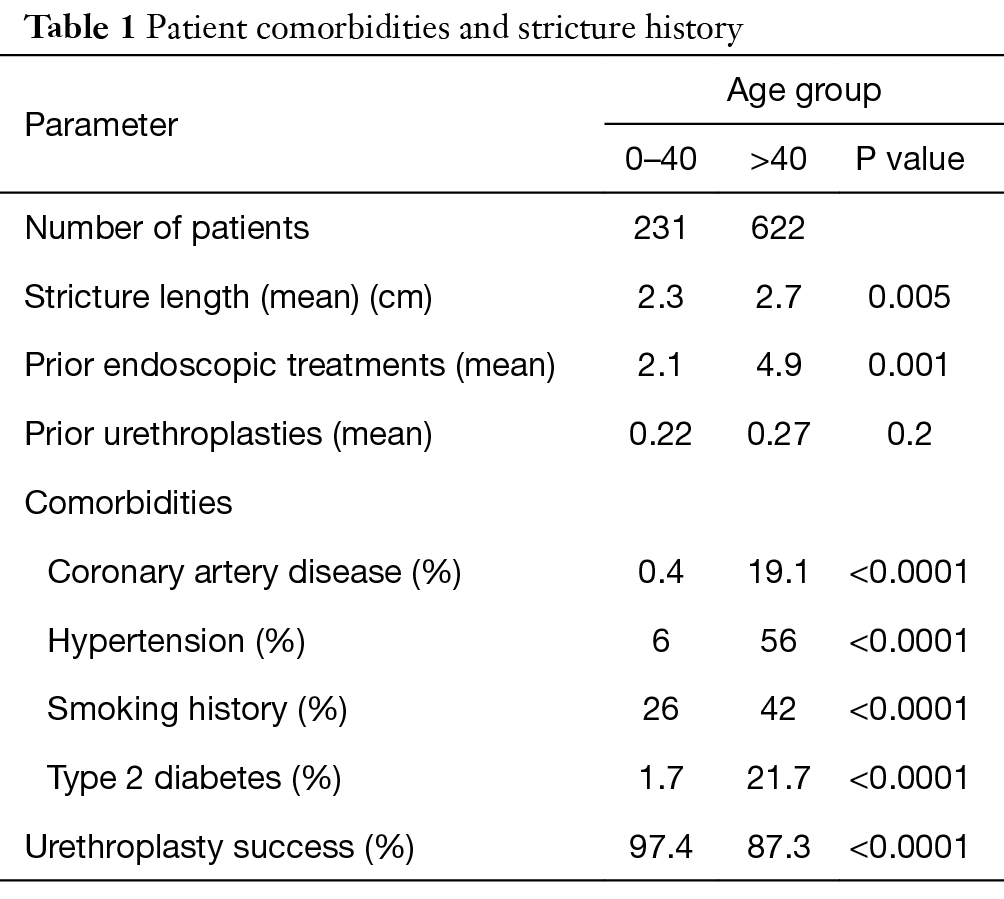 There was no significant difference in the number of prior urethroplasty procedures between the two groups (Table 1). However, older men presented for reconstruction with a significantly greater number of prior endoscopic treatments (2.1 vs. 4.9, P=0.001) and had a longer mean stricture length compared to younger men (2.7 vs. 2.3 cm, P=0.005). Traumatic etiology was more commonly found in the younger group, whereas older men were more likely to have iatrogenic strictures (Figure 1). Excision and primary anastomosis were the most commonly used reconstructive technique in both groups but was utilized less frequently in older men (77% in >40 group vs. 87% ≤40 group, P=0.0009). 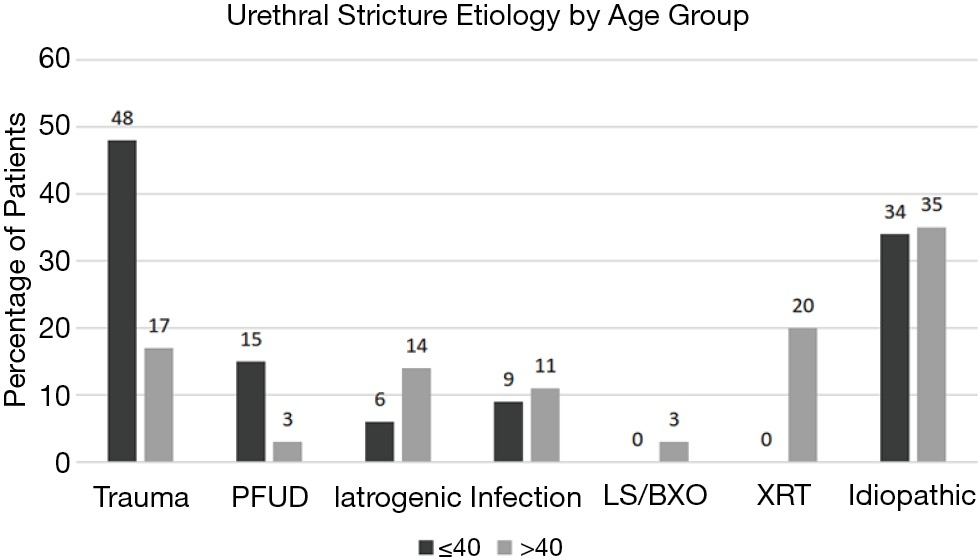 Operative success—defined as functional voiding without the need for additional intervention—in our overall cohort was 88.9%. When stratified into two age groups, younger men had significantly better urethroplasty success (97.4%) compared to older men (87.3%, P<0.0001) over a median follow-up of 52.4 months (Table 1). 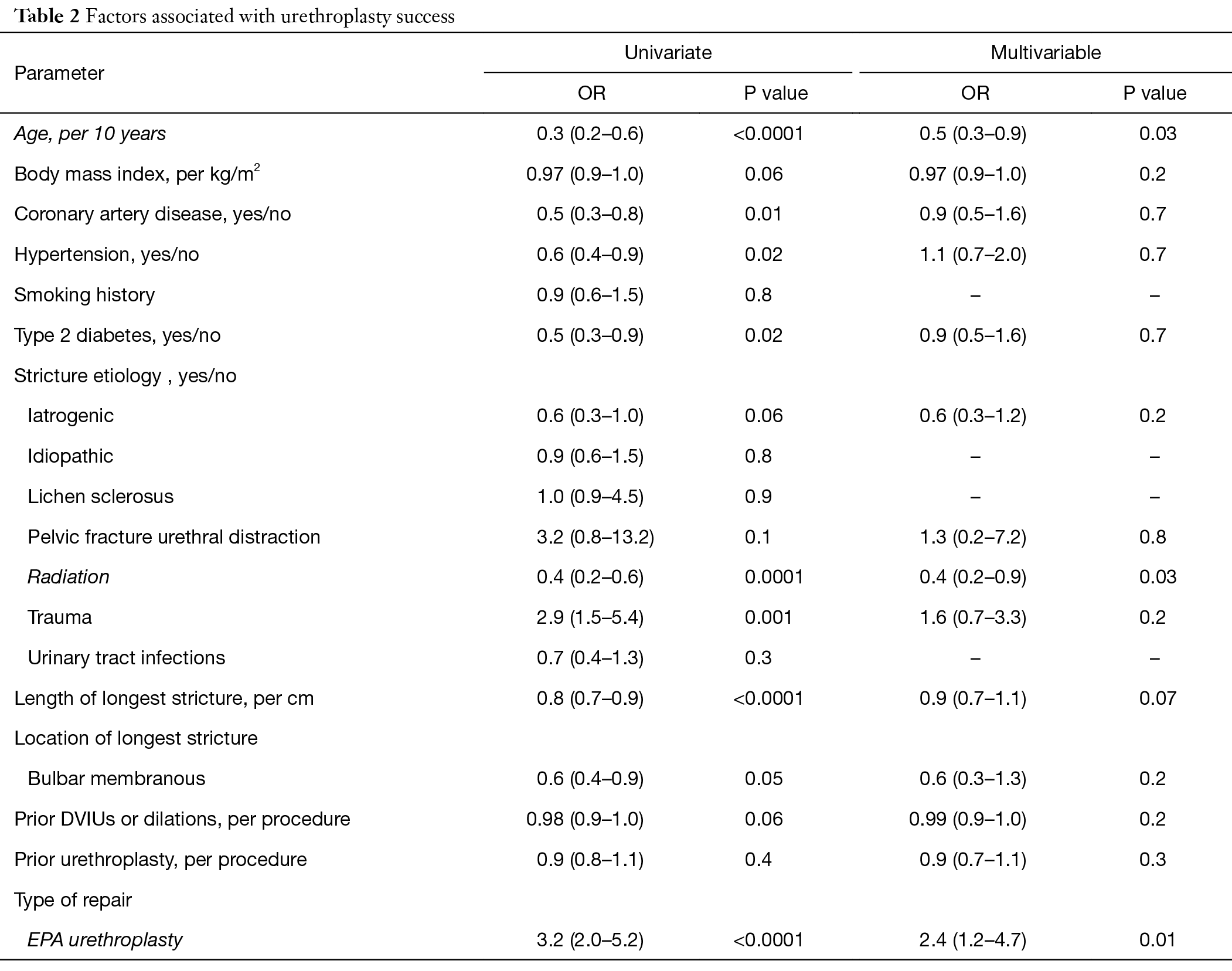 In this study we present our cumulative decade long tertiary referral center experience with bulbar urethroplasty, focusing on outcomes among younger patients undergoing urethral reconstruction. We found that men under 40 years old had improved outcomes after urethroplasty compared to older men despite the finding that younger men more commonly presented with traumatic strictures (as opposed to iatrogenic or radiation-induced strictures seen in older men). Finally, we found that anastomotic urethroplasty predicted better outcomes compared with substitution techniques.

Older men in our study were treated with a greater number of repeated endoscopic procedures for urethral stricture compared to younger men before presenting for definitive reconstruction. Endoscopic management has traditionally been the mainstay of urethral stricture treatment due to ease of urethral dilation or urethrotomy. However, in 2016, the American Urological Association published treatment guidelines for the management of urethral stricture disease, which recommended against repeated endoscopic procedures for stricture disease (9). Men undergoing repeated urethrotomy are not only subject to failure rates as high as 80% but also develop worsened stricture disease (4). We previously reported that men who had undergone more than two transurethral treatments for bulbar strictures presented with longer strictures (mean 3.68 vs. 2.20 cm, P=0.001) and were more likely to require substitution urethroplasty (OR 5.1, 95% CI 1.9–14.2) (3). In the present study, older men were found to have significantly longer strictures, likely because of this greater history of endoscopic intervention. Furthermore, younger men probably had more favorable tissue characteristics due, in part, to less trauma from transurethral procedures than older patients, likely contributing to improved urethroplasty outcomes.

In recent years, several groups have evaluated outcomes of urethroplasty in older men. In 2017, the TURNS group reported on their multi-institutional experience with urethroplasty in men over 60 (7). In a one-year follow-up period, they found no significant difference in outcomes between older and younger men undergoing urethroplasty. However, this study excluded patients with a history of radiation, potentially improving the apparent rate of urethroplasty success in the older population.

Older men have a higher rate of co-morbidities which may predispose to poor reconstructive outcomes. Diabetes and coronary artery disease have well-demonstrated adverse effects on both peripheral vasculature and erectile function (10,11). Recent histopathologic findings from men undergoing urethral stricture repair suggest that hypogonadal men have impaired periurethral vascularity resulting from loss of androgen receptor expression (8,12). A number of studies have demonstrated changes in serum testosterone levels with advancing age, with an annual decline of 1–2 (13,14). By the age of 60, approximately 30–40% of men are hypogonadal based on serum assays (15). While serum testosterone levels were not assessed in our study, it is likely that the older cohort (median age 60.2 years) had a higher prevalence of low serum testosterone compared to the younger men (median age 29.6 years); however, this should be assessed more completely in future research as this was a limitation of our study.

In our series, younger men had a lower prevalence of radiation-induced strictures compared to their older counterparts. Radiation induces vascular damage and fibrosis of the urethra and corpus spongiosum which results in more complex stricture disease and reconstruction (16,17). Pelvic radiation often results in obliterative strictures in the bulbomembranous urethra and are best repaired in anastomotic fashion (18). In our recent evaluation of a decade of experience in managing radiation-induced strictures, we found recurrence in 36.6% of patients (19). This failure rate is significantly higher than the expected for anastomotic urethroplasty, underscoring the important role of stricture etiology in urethroplasty outcomes.

Ethical Statement: The authors are accountable for all aspects of the work in ensuring that questions related to the accuracy or integrity of any part of the work are appropriately investigated and resolved. This study was approved by the Institutional Review Board of The University of Texas Southwestern Medical Center at Dallas. (ID: 102012-021).