Inflatable penile prosthesis (IPP) is widely accepted as the treatment for medical refractory ED which is a psychologically burdensome condition for aging men (1,2). Although IPP patient satisfaction rates are over 90% (3), 7.5% of these devices are subject to reoperation—often mechanical failures (4-8). Other common indications for reoperation include patient dissatisfaction, chronic IPP pain, and impending distal cylinder tip extrusion (DCTE).

Impending DCTE comprise approximately 5–33% of reoperations (9,10). It is currently unclear what risk factors predispose patients to DCTE (11,12). In this study, we sought to identify possible risk factors for impending DCTE, and more specifically, time to extrusion repair from original penile prosthesis placement. We hypothesize that the risk for extrusion is a manifestation of tissue fatigue which directly increases with time from original penile prosthesis.

We completed a retrospective review of our single surgeon IPP database (n=797) from the years 2007 to 2018. We identified those who had surgical revision, replacement, or removal of the prosthesis for a confirmed DCTE. We excluded any DCTEs that occurred in the setting of infection. Distal corporoplasty was performed on patients requiring surgical revision as described previously by Mulcahy (13). Deep glansplasty was performed on patients presenting with impending medial extrusions as described previously at our institution (14). The primary clinical end point of this study was to identify the time from original penile prosthesis placement to extrusion repair. Secondary clinical end points included location of extrusion and identification of mitigating factors such as presence of corporal fibrosis and/or deformity, along with other comorbid medical conditions.

The prevalence of diabetes, chronic kidney disease, corporal fibrosis, and radiation exposure in our cohort was 9 (34.6%), 3 (11.5%), 7 (26.9%), and 3 (11.5%), respectively. The most prevalent characteristic of our cohort was a history of prior IPP (57.7%). Moreover, 6 out of 7 patients with corporal fibrosis did not have a history of prior IPP. Over a quarter of these patients had Peyronie’s disease, and over 10% had both sickle cell and priapism induced erectile dysfunction (Table 2). 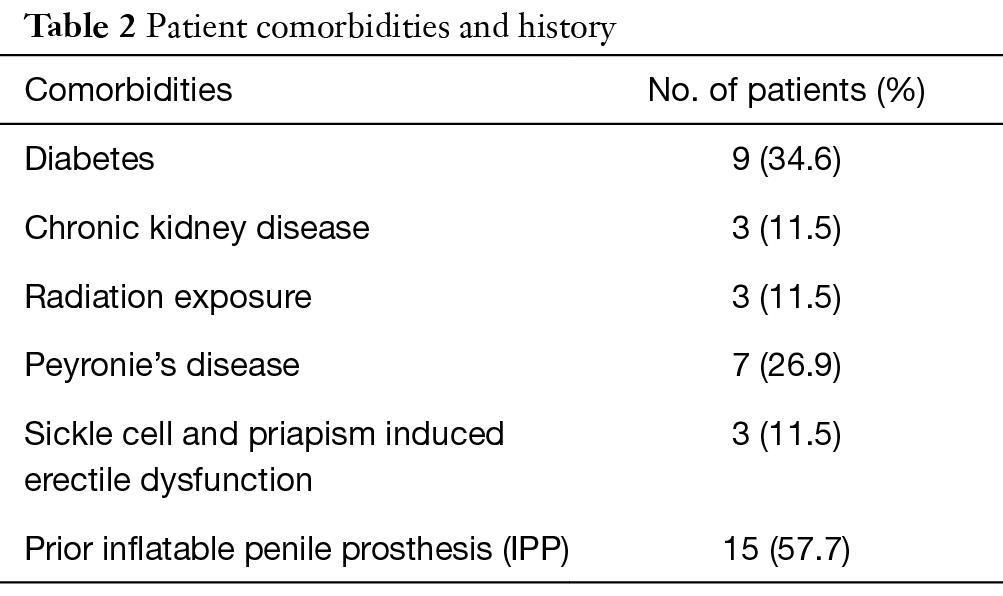 The mean time from initial placement to extrusion repair surgery was approximately 8.4 years (median 5.5 years) with a mean post-operative follow-up of 17.5 months. At the time of IPP repair, 10 (38.5%) patients underwent corporoplasty with repositioning of the same prosthesis, 7 (26.9%) patients had complete replacement of the prosthesis, and 9 (34.6%) patients had a prosthesis removal. Four of the prosthesis removals were left with the non-extruded cylinder in place (Figure 1). Two patients required an additional repair after their first extrusion. The time to these patients’ first extrusions were 1.6 and 16 years, respectively. The time to second extrusion was less than 1 year. 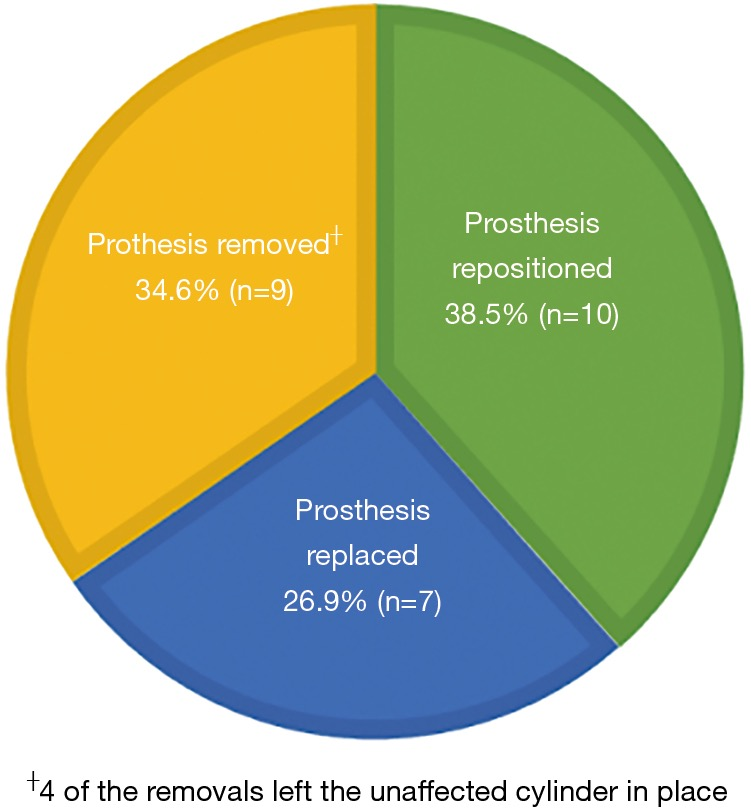 Because IPP extrusions make up only a minority of reoperation cases, the literature is scarce in identifying risk factors. Our experience reveals that patients with corporal fibrosis surrounding the implant appear to be at increased risk for extrusion. Our data further suggest that DCTE is often the result of the chronic microtrauma stemming from repeated or prolonged inflation of the robust pressurized device interfacing with delicate distal penile tissue over time. Over half of our DCTE patients had history of additional prior implant surgery before the extrusion presentation, contributing to even more long-term damage to the area. We suspect that many extrusion patients may have left their implants with some degree of constant partial erection, likely due to educational and/or other barriers. We now counsel all implant patients to maintain complete flaccidity when the device is at rest as a preventive measure

The mean time to extrusion repair in this cohort was approximately 8 years following initial IPP implantation. Virgin implants have been shown to have a survival rate of 78.5% at 5 years and 64.9% at 10 years (15). All devices in our DCTE cohort were mechanically functional at the time of presentation, so the time to extrusion in our cohort corroborates the decreased survival rates seen in virgin implants at 15 years.

According to the literature, the most common site of extrusion is the distal urethra (16). In our series, 46% of cases were lateral extrusions versus 34% being in the distal urethra. The predominance of lateral extrusions we observed coincides with the anatomical variation of tunica albuginea thickness at the 5 and 7 o’clock positions. Cadaver studies have shown that these areas lack outer longitudinal collagen layers, resulting in decreased breaking point pressures. The decreased thickness of the tunica albuginea at 5 and 7 o’clock increases the risk for implant extrusion from chronic microtrauma that occurs with repeated inflation. Similarly, the intravenous pillars, which course laterally, have an important role in maintaining the shape of the corpora towards the distal end of the penis. Tissue compromise in this region would likely increase the risk of DCTEs (16).

Approximately 35% of our cases presented with a history a diabetes. Prior reports have shown that diabetes increases the risk for infection and trivial trauma induced extrusions, but our case series reveals that patients with DM might also be at an increased risk for DCTEs (17,18). This could possibly be due to compromised perfusion of the corpora cavernous or tissue fatigue within the tunica albuginea from the pressurized device over time, which weakens the tissue surrounding the implant. Diabetic mice have been found to have a significant decrease in caveolin-1 (cav-1) in their corporal tissue—which is related to a significant decrease in penile blood flow on penile Doppler (19). This decreased cav-1 expression could provide a possible explanation for the pathophysiology that results in compromised perfusion to the corpora of diabetic ED patients.

While these findings represent a new understanding of the nature of IPP extrusion, our study is not without limitations. Our data was reviewed retrospectively and mainly focused on patients operated on by a single surgeon. In addition, the patient cohort was limited secondary to the rare incidence of penile prosthesis extrusion. This series of 26 IPP extrusions is one of the larger studies available in the current literature. Longer follow up and a more expansive cohort is needed to further evaluate possible risk factors DCTEs.

The risk of IPP extrusion appears to be associated with increased time from initial prosthesis placement, prior history of IPP placements, and the presence of corporal fibrosis. Patients, especially younger men, should be counseled to recognize this important long-term sequela of IPP surgery, especially beyond the first decade.

Ethical Statement: the authors are accountable for all aspects of the work in ensuring that questions related to the accuracy or integrity of any part of the work are appropriately investigated and resolved This study was approved by the Institutional Review Board of The University of Texas Southwestern Medical Center at Dallas (ID: 102012-019).