Conventional transrectal ultrasound guided (TRUS) biopsy for prostate cancer, without a prior multi-parametric magnetic resonance imagining (mp-MRI), has been associated with the underdetection of clinically significant prostate cancer (csPCa) (1,2). The PROMIS trial demonstrated the limited accuracy of standard TRUS biopsy, and validated the benefits of pre-biopsy mp-MRI (1). This has resulted in a recent shift in diagnostic pathway design to incorporate pre-biopsy mp-MRI followed by a targeted biopsy approach as standard of care (3,4).

The case for mp-MRI targeted prostate biopsy was further strengthened by the results of the PRECISION randomised controlled study, in which targeted biopsy alone performed superiorly in the detection of csPCa compared to conventional systematic biopsy (2). In that trial, however, non-targeted systematic biopsies were not performed in the cohort of men with MRI-visible lesions. Despite improvements in mp-MRI performance and standardised radiological reporting, a significant fall in radiologically invisible csPCa, subsequently confirmed on systematic biopsy, has not occurred (5-8).

Research has now focused on the true clinical utility of an additional non-targeted systematic biopsies when performed alongside an mp-MRI targeted prostate biopsy during the same biopsy session (Figure 1). In this article we summarise the current evidence base for and against a “combined biopsy” approach (Table 1), calculating the marginal gains in cancer detection rate in each strategy. 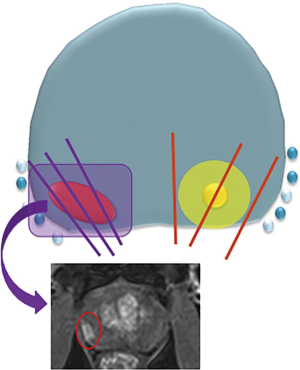 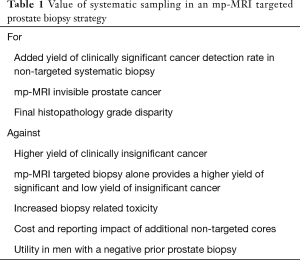 The strongest evidence against a combined biopsy strategy is born from the results of mp-MRI targeted prostate biopsy results in the detection of csPCa. The current literature reports the detection rate of csPCa and clinically insignificant prostate cancer (ciPCa) in mp-MRI targeted biopsy as 25–62% and 5.6–23%, respectively (Table 2) (5,7-14). 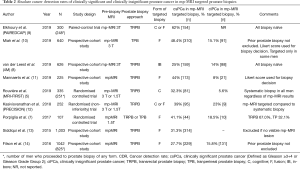 Beyond the randomised controlled trial setting, Miah and colleagues’ prospective cohort study of transperineal image-fusion biopsy reported similarly high rates of csPCa (48.4%) and a low rate of insignificant disease (15.1%) detection (10). Of clear methodological distinction from aforementioned studies, the non-targeted biopsy performed in this study did not anatomically overlap in areas with targeted core sampling (10). Thus, preventing the duplication of reported csPCa in systematic cores performed in known regions of interest already sampled by prior targeted cores. Furthermore, van der Leest et al.’s prospective study, in which only biopsy-naïve men underwent an in-bore mp-MRI targeted transrectal biopsy, reported a 25% csPCa and a 14% ciPCa detection rate (8). Figures from both of these studies are highly promising for the replication of such favourable targeted csPCa detection rates in routine clinical practice.

Anatomically, mp-MRI targeted biopsy is superior to systematic biopsy at detecting anterior and apical tumours (15). These are frequently missed on systematic TRUS prostate biopsy (16). It is worth noting that the current literature does not place preference on the form of targeted biopsy (i.e., targeted software fusion versus targeted cognitive fusion) when assessed in terms of csPCa detection rate (5,8,10,12,17). This is supported by the findings of high-level evidence from the FUTURE randomised controlled trial, which demonstrated no significant difference in csPCa detection when comparing targeted software fusion and targeted cognitive fusion biopsies in men with a previous negative systematic non-targeted prostate biopsy (17).

Men with a prior negative biopsy

Furthermore, Patel et al. evaluated the utility of systematic biopsy alongside fusion targeting and found that a prior negative prostate biopsy was significantly associated with the absence of clinically significant cancer in the non-targeted systematic cores (OR 0.46; 95% CI, 0.21–0.99; P=0.046) (19). Whilst no consensus exists on the role of a combined biopsy strategy in men with a prior negative biopsy status, there is growing evidence non-targeted cores in this setting offer little clinical utility (19).

Evidence from patient reported outcome measures in template-mapping trials, supports the notion that additional cores performed in a prostate biopsy pathway can be detrimental to post-biopsy urinary flow, genitourinary and sexual function (20). In contrast, the reported complication rate of local anaesthetic or sedation for targeted transperineal prostate sampling is low, with a reported post-biopsy urinary retention and sepsis rate of less than 1% (21).

However, a systematic review by Loeb et al. reported greater biopsy related pain with increasing number of cores performed (22). In addition, there is evidence that suggests that patient-reported outcome measures (PROMS), in particular urinary flow and sexual function, are persistently poorer in men who undergo prostate biopsies with a high median number of cores (20,23). Reducing the overall number of cores obtained by limiting non-targeted systematic cores may offer improvements in post-biopsy genitourinary functional outcomes without sacrificing oncological outcomes.

Performing additional non-targeted cores in a targeted biopsy pathway does directly increase the histopathology cost per case by an estimated £112.79/$146.81 (25). In addition, the downstream effects are an increase the technical reporting load on pathologists and a wider clinical reviewing burden on multi-disciplinary meetings.

Evidence for a combined mp-MRI targeted and non-targeted approach

Added value of a csPCa detection in combined biopsy

The additional diagnostic yield of csPCa detection by performing a non-targeted systematic biopsy in addition to an mp-MRI targeted biopsy is reported to be 1.3% to 11% (Table 3) (5,8-11,14,26). A combined biopsy strategy may refer to mp-MRI targeted cores in addition to either sectoral templating or 12-core systematic TRUS. The Ginsburg Study Group on Enhanced Prostate Diagnostics have supported a sectoral templating approach since 2013 (27). On the premise that preferential targeting of the peripheral zones leads to the avoidance of the inherent oversampling of template-mapping sampling and the under-sampling of systemic TRUS in isolation (27). 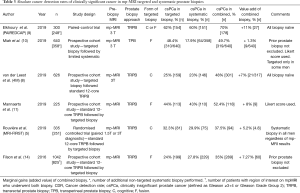 However, MRI-FIRST, the multicenter, paired diagnostic study by Rouviere and colleagues has provided the first high-level data utilizing a combined TRUS-biopsy strategy (MRI-targeted followed by 12-core systematic) (5). In their study, 251 men underwent combined prostate biopsy; the csPCa detection rate was 29·9% (95% CI, 24.3–36.0) for systematic biopsy and 32.3% (95% CI, 26.5–38.4) for targeted biopsy. csPCa would have been missed in 5.2% of cases if systematic biopsy had not been performed, and in 7.6% if targeted biopsy was not performed. csPCa detection rates were improved when both biopsy methods were combined. However, targeted biopsy detected significantly more grade group ≥3 tumours and significantly fewer grade group 1 tumours.

Elkhoury and colleagues’ recently-published PAIREDCAP trial was paired-cohort study of 248 biopsy-naïve men who underwent a 12-core systematic biopsy followed by two MRI targeted biopsies (targeted cognitive fusion and targeted software fusion) during the same session (9). csPCa was detected in 47% of targeted cognitive fusion biopsies, 54% of targeted software fusion biopsies, and 60% of biopsies obtained via systematic sampling. However, a combined approach resulted in maximal detection, with a 70% (178/248) csPCa detection rate, an additional diagnostic yield of 11% (9).

The additional yield of csPCa detected in a combined strategy varies widely across the literature. However, the above studies suggest a significant proportion of csPCa is missed when only a mp-MRI targeted biopsy is performed. The level of acceptable of “missed csPCa” in these pathways is a wider debate yet to gain international consensus.

A major limitation of exclusive mp-MRI targeted biopsy is the notion of patients harboring mp-MRI-invisible disease. In men with no identifiable region of interest on mp-MRI, targeted biopsy is not performed and “invisible” disease would otherwise go undetected (28). The PROMIS trial demonstrated that mp-MRI had a sensitivity of 93% and negative predictive value of 89% for predicting csPCa (defined as Gleason ≥4+4 or MCCL ≥6 mm) (1). A recent meta-analysis on the topic reported the median mp-MRI negative predictor value was 82.4% (IQR, 69–92.4%) (28). Unsurprisingly, negative predictor value significantly decreased when baseline cancer prevalence increased (28). mp-MRI invisible disease remains a significant clinical concern amongst urologists in routine clinical practice (29).

Filson’s group identified that 12% of biopsy naïve men with no ROI who underwent a systematic biopsy had clinically significant disease (14). Le and colleagues’ study of 112 whole-mounted prostatectomy specimens detected csPCa in 28% of cases, cancer that was invisible to expert reported mp-MRI (30). Furthermore, Chung et al. retrospectively reviewed 213 radical prostatectomy specimens matched to prior mp-MRI reports (31). The group defined “invisible” prostate cancer was as those graded PIRADS 1 or 2, or those with no MRI-visible region of interest. The group reassuringly found 76.1% of mp-MRI invisible cancer was clinically insignificant disease. However, 6.6% (n=20) of those with negative MRI were found to have ≥ Gleason 8 disease (30).

In van der Leest and colleagues’ study an additional 21 men were diagnosed with csPCa using a combined biopsy strategy (8). However, in 20 of these 21 additional cases the ROI was present on pre-biopsy mp-MRI. Thus, only a single patient (<1%) had mp-MRI invisible cancer detected on a non-targeted systematic biopsy (8).

Persistence of MRI invisible disease has limitations for mp-MRI as a triage biopsy tool in biopsy naïve men. The answer to this may lie in combining MRI-derived parameters (e.g., MRI-prostate volume, PIRADS 1 or 2) in addition to clinical variables (e.g., age, ethnicity) (32). Such modelling produces a binary (yes/no) outcome to the risk of csPCa (32). At present it should be noted, the addition of such modelling into mp-MRI triage has only supported a significant reduction in false-positive rates (32).

Finally, with regard to agreement on mp-MRI ROI score (PIRADS or LIKERT), this has suffered from low inter-observer reproducibility (33). One study found even experienced radiologists, using PIRADS version 2, had poor agreement in the peripheral zone for features relating to diffusion weighted imaging (k=0.53–0.61) (33). With low inter-observer reproducibility, an MRI interpreted as having an ROI by one radiologist may be graded as “negative” by another, failing to trigger a targeted biopsy. In this example case, detection would only be possible via systematic biopsy.

There is some concern that exclusive targeted sampling may underestimate whole gland disease status and thus impact the downstream treatment modality choice by patients (31,34,35). Muthigi and colleagues reviewed the whole mount pathology of 1,003 serial patients in whom patients were upgraded in non-targeted systematic cores alone to csPCa in 13.5% (n=135). Only 1.1% (n=11) resulted in the identification of high-risk disease (Gleason ≥8) (35). When detailing failure of targeted biopsy to detect this disease the authors’ concluded that MRI invisible disease, operating clinician technique failure and intra-lesion Gleason heterogeneity were all significant (35).

Furthermore, when reviewing whole-gland prostatectomy histopathology Siddiqui and colleagues reported that the sensitivity of targeted prostate biopsy in detecting Gleason ≥7 rose from 77% (95% CI, 67–84%) to 85% (95% CI, 76–91%) when a combined strategy was utilized (13).

Finally, the ability to accurately characterize cancer morphology, in particular Gleason 4 subtypes on targeted biopsy alone has been questioned (36). The presence of Gleason pattern 4 cribriform tumours is associated with increased cancer specific mortality and is an adverse independent predictor of metastasis-free survival (36,37). Truong and colleague’s, re-reviewed 694 positive cores for pattern 4 subtypes. The group concluded that a combined biopsy over a targeted only strategy increased absolute cribriform pattern detection by 8.5% (37.1% vs. 28.6%) (34). Awareness of the presence of such morphology has notable downstream effects on the treatment choices and associated risks presented to patients.