The rationale for aggressive surgical management of renal cell carcinoma (RCC) with inferior vena cava (IVC) involvement was first formally described in 1972 by Skinner et al. at Massachusetts General Hospital, at which time the surgical principles for the procedure were established and described (1). Prior to this, IVC thrombectomy was rarely undertaken given the poor prognosis associated with the advanced stage of disease. Decades passed with few changes to the operative technique until the mid-2000s and the burgeoning adoption of robotics in urologic surgery. Pure or hand-assisted laparoscopic radical nephrectomy for level II thrombi was initially described in scattered case reports (2,3), but the cases were limited in number and involved only early level II thrombi extending between 1–3 cm above the renal vein. Starting in 2011, several groups began reporting outcomes of IVC thrombectomy using the robotic approach, and since then thrombus levels and surgical complexity have been increasing (Figure 1). 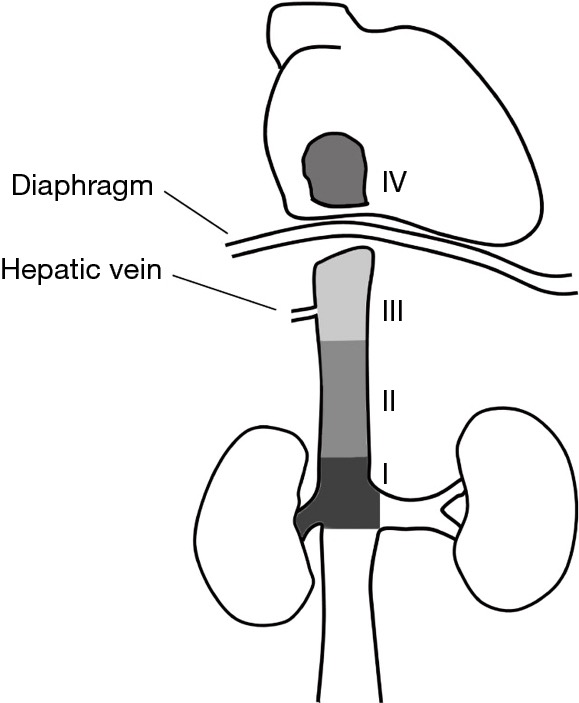 In 2011, Abaza et al. published an initial series of five patients who underwent robotic IVC thrombectomy by a single surgeon. Thrombi protruded between 1–5 cm into the IVC, and all cases required cross-clamping and cavotomy with reconstruction. Operative times were relatively long, median 327 minutes (range, 240–411 minutes), but in this early series, patients generally did well with short lengths of stay, mean 1.2 days (range, 1–2 days), and no significant complications. In 2015, robotic management of level III thrombi was reported, but cohort size remained limited (4,5). Gill and colleagues published an initial series of 16 cases, 9 of which were level III without open conversion or mortality. The median operative time was 294 minutes (range, 270–378 minutes), and median hospital stay 4.5 days. Angioembolization was carried out preoperatively in patients with left-sided and/or large tumors, collateralized vessels, or arterialized thrombi (5). Earlier in the same year, Bratslavsky and Cheng published a case report of a single level III right-sided thrombus and retroperitoneal lymph node dissection. The total operative time was 366 minutes and the hospital stay was 3 days. The patient recovered well without postoperative complications.

After the initial robotic experience for high-level thrombi, several groups have published on outcomes, but even multi-institutional studies have included relatively small cohorts and limited level III thrombi (6-9). In 2016, Abaza et al. reported on 32 cases performed by nine surgeons across nine institutions (6). A total of 30 level II and only two level III thrombi were included in the cohort. Caval tumor lengths ranged widely from 1–11 cm (median 4.2 cm). Twenty-four of the cases required cross-clamping, mean operative time was 292 minutes (range, 180–411 minutes), mean EBL was 399 mL (range, 25–2,000 mL), and mean hospital stay was 3.2 days (range, 1–7 days). None of the cases resulted in open conversion or mortality. The following year, Chopra et al. reported 1-year outcomes of an additional 25 selected patients with level II and III thrombi (9). They stressed that a uniform and reproducible surgical approach was imperative for reliable and safe outcomes and reiterated the previously defined “IVC-first, kidney-last” technique. The goal of the technique is to minimize thrombus embolism and major hemorrhage. Tumor thrombus embolism is minimized through minimal IVC manipulation and dissection of tissue away from the IVC rather than vice versa. Twenty-four of the patients were successfully completed while one was converted to open, and of the remaining cases, 11 were level III thrombi. Staplers are fired across the renal vein and associated tumor thrombus on right- and left-sided cases. Management of left-sided tumors is more complex than right and requires not only preoperative angioembolization but also intraoperative repositioning from the left lateral decubitus position (left side down during caval work) (Figure 2) to the right lateral position (left side up) for the nephrectomy portion of the case. In this series, 20 patients (80%) underwent preoperative renal artery embolization. At one year, four patients (16.7%) had a complication including deep vein thrombosis (n=1), pulmonary embolus (n=1), chylous ascites (n=1), and subphrenic abscess (n=1). At a median follow up of 16 months (range, 12–39 months), overall survival (OS) was 100%, 11 (46%) developed new metastases, and 10 (42%) received adjuvant therapy. 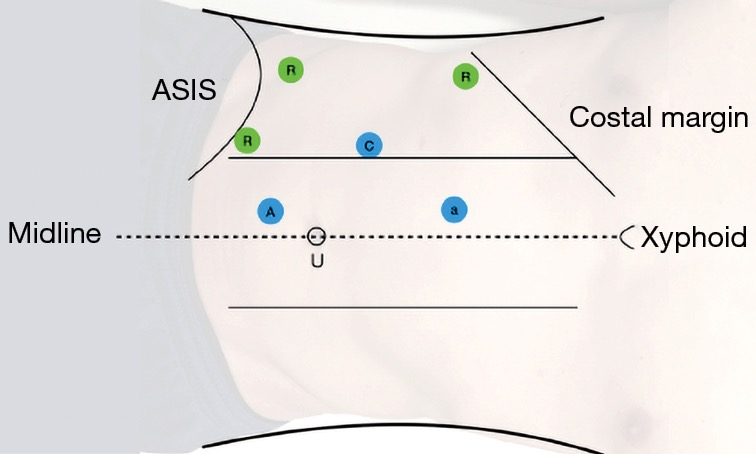 The series published to date have emphasized the reproducibility and safety of the robotic technique given reassuring outcomes from retrospective series. While published studies have clearly included very carefully selected patients, clear selection criteria have yet to be defined in the literature. Intraoperative factors that lead to open conversion have similarly not been defined. Failure to progress “due to insurmountable bowel loops” was reported as a reason for open conversion in the recent series by Chopra et al. (9), but most other series have not discussed converted cases. Management of major complications that require intraoperative consultation from vascular, hepatic, or cardiac surgeons may not be possible robotically, necessitating open conversion as robotic experience across specialties and institutions is highly variable (Table 1). 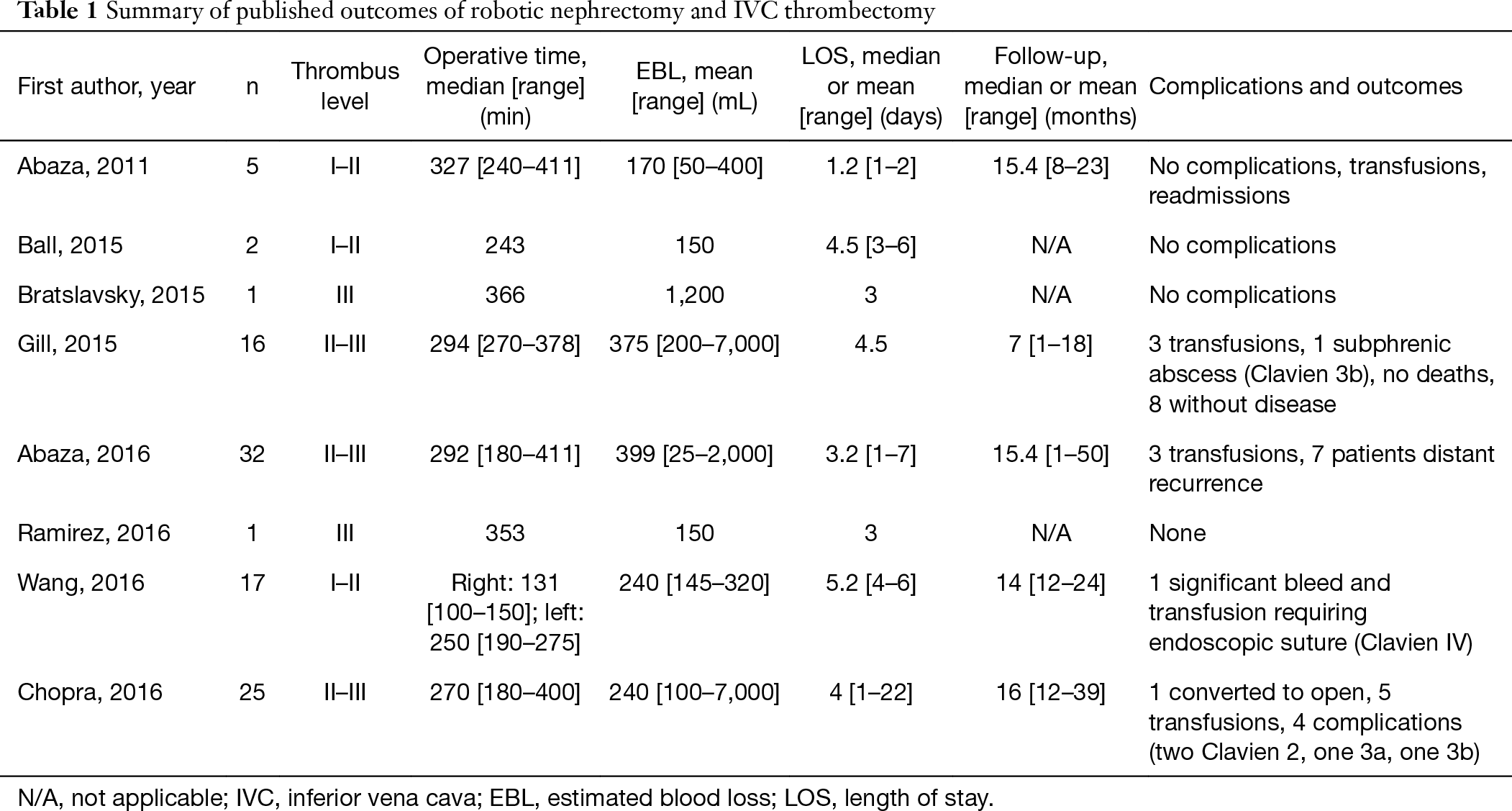 Long-term oncologic outcomes are lacking given the novelty of the procedure and relatively limited cohorts in published literature. The previously discussed study by Chopra et al. published 1-year outcomes (9), but most others have not reported outcomes outside of the initial postoperative period. Whether stapling across the thrombus-containing renal vein or tumor spillage in the setting of pneumoperitoneum have effect on long-term oncologic outcomes is not yet known. Long-term outcomes of preoperative renal artery embolization have also previously been called into question. A 2,009 retrospective series by Subramanian et al. reported on a unique cohort in which 60% (n=135/225) of the patients underwent preoperative embolization. They found that patients who underwent embolization prior to open radical nephrectomy and IVC thrombectomy had higher rates of transfusion, longer operative time, more postoperative complications, longer ICU stays, and interestingly, even increased preoperative mortality (13% vs. 3%, P=0.017) (10). As 67% of the embolized patients had level III and IV thrombi compared to 48% of the non-embolized patients (P=0.032), multivariable analyses adjusting for thrombus level and other clinical variables were performed which demonstrated a persistent association between embolization and increased perioperative mortality (OR 5.5, 95% CI: 1.2–25.6, P=0.029). Though these are findings from a single retrospective study, the cohort size is still larger than the robotic series published to date, and the findings deserve attention and further study.

As urologic operative techniques continue to evolve, determining whether the new techniques contribute to progress and not merely novelty, will be of paramount importance. To date, there are no prospective randomized trials comparing robotic and open IVC thrombectomy, but recent trials for cystectomy have not shown superior outcomes for the robotic approach but have revealed significantly higher costs (11,12). As national healthcare costs are already staggeringly high and rising, the value of robotics must be carefully evaluated for specific urologic operations, because the benefits may not be equal or worthwhile across all procedures. The early published robotic experience demonstrates that robotic IVC thrombectomy performed by gifted minimally invasive surgeons is feasible in select patients, but as we continue to move forward, defining selection criteria, indications for and logistics of open conversion, necessity and safety of preoperative embolization, cost versus value, and most crucially intermediate- and long-term oncologic outcomes will be of utmost importance. Until these data are available and the procedure becomes more reproducible, open radical nephrectomy with IVC thrombectomy will remain the standard of care for locally advanced RCC.

Provenance and Peer Review: This article was commissioned by the editorial office, Translational Andrology and Urology for the series “Controversies in Minimally Invasive Urologic Oncology”. The article has undergone external peer review.

Conflicts of Interest: Both authors have completed the ICMJE uniform disclosure form (available at http://dx.doi.org/10.21037/tau.2019.06.15). The series “Controversies in Minimally Invasive Urologic Oncology” was commissioned by the editorial office without any funding or sponsorship. Marc C. Smaldone served as the unpaid Guest Editor of the series. The authors have no other conflicts of interest to declare.