Vasectomy is a common urologic procedure in North America and about 0.5 to 1 million men received this operation each year. Due to various reasons, some men who had already received surgical sterilization want to regain their reproductive function and therefore require for the vasectomy reversal. There are some problems in traditional vasectomy. Although both ends of the vas deferens can be sutured together under direct vision or using the surgical loupe mounted on the head, it is difficult to meet the standard of anastomosis. Some tissues may enter the lumen and thus cause luminal stenosis, which affects the normal peristalsis and ejaculation of vas deferens. In our center, the vasectomy reversal was performed on 24 patients with failed vasectomy reversal using microsurgical two-layer anastomosis technique, with satisfactory effectiveness.

Totally 24 patients, with an average age of 40.4±7.14 years (range, 26 to 55 years), were enrolled in the treatment group. Reasons for vasectomy reversal included: remarried (n=16); unexpected injury or death of their children (n=3); mental disabilities of their children (n=4); and painful nodules after vasectomy (n=1). The average time from the vasectomy to this operation was (115.0±50.6) months (range, 22-222 months). All patients in the treatment group received a second operation after previous failed vasectomy reversal, among whom 17 patients had failed once and 7 patients twice. Testicular biopsy was performed before the operation to confirm whether the testicles had good spermatogenic function. Thirty-four patients who underwent the same surgical procedure for the first time during the same period were selected as the control group. The control group had an average age of (39.0±6.11) years (range, 25-51 years) (P=0.482) and an average time to the vasectomy of (110.7±54.9) months (range, 12-208 months) (P=0.763) (Table 1). 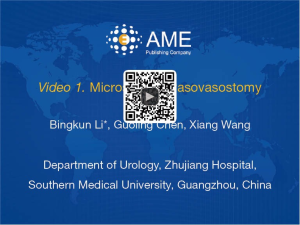 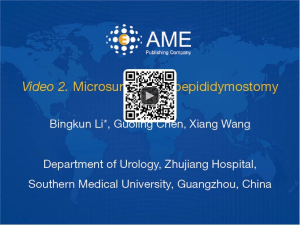 The scrotums of patients were elevated after the surgery. Oral antibiotics were administered for 3 days. The surgical site was keep clean and dry by dressing.

Table 2 the postoperative results of the patients
Full table

Vasectomy, the most simple and safe sterilization for males has been widely applied. Due to various reasons, however, some individuals may want to regain their reproductive capability. While vasectomy reversal is one of the most important means for these people, it needs skilled surgical techniques, particularly for some patients admitted in this study who had complex conditions that accepted a second or more operations. The patency rate and the postoperative pregnancy rate of the conventional procedure are not satisfactory. Nevertheless, the introduction of the microsurgical technique undoubtedly brings hope for patients. According to literature review and our own experiences, the success of vas deferens recanalization is related to many factors.

The time interval from vasoligation to recanalization is the most important. A report summarized the result of 747 cases that the patency rate of microsurgical vas deferens recanalization was related to the time interval: a longer interval was associated with lower success rate (3). Fischer reported the similar findings (4). Due to the insufficient sample size of this study, it was different to analyze the time-effect relationship between the vas deferens recanalization and the patency rate. However, we did find that in patients with long time interval, the fibrous scar hyperplasia tended to be more obvious and the operation was more difficult. In addition, some authors have believed that the age of patients were associated with the postoperative recanalization, which might be indirectly explained by the time interval.

The ligation site is also related to the postoperative patency rate. It has been reported that the closer the ligation site was to the epididymis, the lower the success rate was. In the repeated operation group of this study, the operation was more difficult in patients with the lower ligation sites, because a lower ligation site was closer to the epididymis, and the lumen of epididymis became finer. The 24 patients in our repeated operation group had previously undergone the vas deferens recanalization for one or more times, parts of the vas deferens had been removed and the anastomosis site was very close to the epididymis. The vaso-epididymis anastomosis was required in some of them. Therefore, the operation was quite challenging. To ensure the quality of operation, we used oblique cutting and end-to-end vasovasostomy to increase the diameter of anastomosis. Although the microsurgical vaso-epididymis anastomosis has been frequently used for patients with idiopathic obstructive azoospermatism (5-7), the vaso-epididymis anastomosis after the dissociation of the longer epididymal tube was more feasible for patients with failed vasectomy reversal because of the deficiency of the longer vas deferens and even the vas deferens close to the epididymis end. Using the microsurgical intussusception vasoepididymostomy, Chan et al. greatly improve the postoperative pregnancy rate (8). With the continuous improvement of microscopic technology, the microsurgical vaso-epididymis anastomosis has also been upgraded (9). The autologous materials have also been applied for the vasoplasty as alternative materials (10). Using the cryopreservation technology, Naughton et al. used the frozen-thawed vas deferens as the repair material after the cryopreservation and thawing (11). However, these methods have not been well recognized.

The indwelling of vas deferens stent was also used for the vas deferens anastomosis to increase the probability of recanalization (12), which, however, also remains controversial. The vas deferens stent-assisted vasovasostomy has good recent operation effectiveness. However, the vas deferens wall needs to be penetrated and the mucosal layer will be damaged during the stent placement. Therefore, it will increase the probability of lumen blockage and sperm outflow, resulting in poor long-term outcome. The microscopic technique can not only bring good contraposition of the two ends, which has also been widely recognized (13,14).

In terms of the suture layer of the vas deferens recanalization, one-, two-, and three-layer methods have been employed. While the specific implementation remains controversial, studies have shown that the three methods were not significantly different in restoring the continuity of the lumens, especially under the direct vision of the microscope (4,15,16). The two-layer suture was used in all patients in this study. The outer-in and inner-out stitching method was used in the first layer with the full thickness, and the suture knot was tied outside the lumen to reduce the foreign body. The suture of the serosa was for the purpose of reducing the tension to avoid the complications such as semen spills.

Also, the selection of absorbable and nonabsorbable sutures during the surgery also remains controversial (17). The absorption of the absorbable sutures, whether natural or synthetic, is a process of digestion or hydrolysis, which may cause secondary inflammatory reaction and increase the risk of vas deferens restenosis. The nonabsorbable RROLENE suture was used in all the cases in this study. The polypropylene suture has been widely used in cardiovascular, plastic, and ophthalmologic surgeries. The biological activity of the suture is weak, with light tissue reaction. It will not easily stick to the tissue, and therefore has more advantages for the patients with scar constitution or tissue hypertrophy. More importantly, as a single-fiber suture, it encounters less resistance when passing through the tissue and causes less damage to the vas deferens. Also, it can prevent the attachment of bacteria, minimizing the postoperative complications.

Our study had some limitations. For example, it was not a prospective study, and, as a clinical study, larger sample size is needed.

The microsurgical two-layer anastomosis technique is a good operation method. It can provide satisfactory patency rate for patients with a previous failed vasectomy reversal, which is comparable with the results of patients who had undergone primary procedure. However, prospective studies with large sample sizes are needed to verify the results.