Prostate cancer (PCa) is the most common non-cutaneous malignancy affecting men in the United States, and in 2017 alone, there was an estimated 161,000 new diagnoses (1). For men with intermediate-risk or high-risk, clinically localized disease, radical prostatectomy or whole-gland radiation therapy-based interventions are pursued as modes of primary definitive treatment with curative intent. However, disease recurrence as measured by a persistence or post-treatment rise in the serum prostate specific antigen (PSA) is not uncommon and occurs in up to 20–30% of men who underwent radical, whole-gland interventions with curative intent (2). For these patients, use of advanced functional imaging modalities such as positron emission tomography (PET) imaging to detect localized intraglandular and extraprostatic sites of persistence or recurrence of disease has become more commonly available and implemented (3-5). Unfortunately, factors such as the generally high metabolic activity of benign prostatic tissue, occasionally low metabolic profile of hormone-naive PCa cells, postoperative scarring and urinary excretion of radiotracers make the delineation of benign from cancerous tissue using traditional radiolabeled glucose analogues challenging (3,6,7).

In May 2016, the Food and Drug Administration (FDA) granted approval for the use of a PET radiotracer, trans-1-Amino-3-[18F]fluoro-cyclobutane carboxylic acid or 18F-Fluciclovine (commercially marketed with the trade name of Axumin by Blue Earth Diagnostics, Oxford, UK), to detect and localize PCa recurrence in patients with a rising PSA following prior therapy (8). 18F-fluciclovine is a synthetic amino acid that is transported by multiple sodium-dependent and sodium-independent channels found to be upregulated in PCa cells (9,10). In addition, 18F-fluciclovine exhibits low urinary excretion which theoretically minimizes background noise when evaluating the prostate bed and surrounding structures including the bladder and urethra (11). It is generally well-tolerated in patients and has a feasible learning curve for interpreting radiologists in this setting (12-14). In a study of 596 men with biochemical recurrence (BCR), no serious adverse events related to fluciclovine were observed (12). Furthermore, repeat administration (n=55) or extravasation of fluciclovine (n=9) did not result in any clinical sequelae (12). Suzuki et al. similarly reported no serious adverse events in a study population of 68 men (13).

Within the past decade, a multitude of studies have evaluated the utility of 18F-fluciclovine PET imaging in the setting of BCR following local therapy for PCa. We performed a systematic review of recently published literature to describe the emerging evidence in support of this imaging modality in comparison to other available staging techniques.

An English literature search was conducted on PubMed for original investigations on 18F-fluciclovine PET imaging for PCa. Our Boolean search criteria included the following terms: prostate, fluciclovine, FACBC, and Axumin. We excluded publication types such as commentaries, editorials, letters to the editor, guideline statements, reviews articles, or interview transcripts. All remaining articles meeting criteria where18F-fluciclovine PET imaging was used specifically for the detection of PCa in the setting of disease persistence or recurrence after primary therapy with definitive, curative intent were considered. Additionally, the bibliographies of the identified studies were used to expand our search to capture any other relevant articles fitting of the inclusion criteria by content. 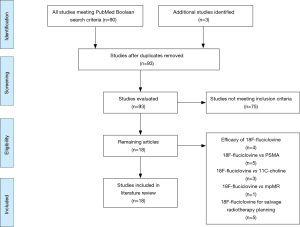 For patients who underwent surgical, radiation-based, or multimodal intervention as primary treatment for PCa, 18F-fluciclovine PET imaging appears to offer a reliable detection rate for both locally persistent disease and extraprostatic disease persistence versus recurrence. Compared to computed tomography (CT) alone, 18F-fluciclovine PET/CT imaging provided a superior sensitivity and specificity for disease recurrence in a 43 patient cohort with histologically confirmed BCR (16). In a retrospective multi-institutional analysis where 143 subjects with previous primary treatment underwent 18F-fluciclovine PET/CT imaging in the setting of BCR, the positive predictive value for local and extraprostatic disease was 71.8% and 92.3%, respectively, compared to a gold-standard of truth based upon histological evaluation (12). In a retrospective cohort analysis of 26 men who underwent 18F-fluciclovine PET/CT imaging, Kairemo et al. also observed a reliable cancer detection rate in this setting. Image positivity was significantly associated with a short PSA doubling time, but not with PSA value alone (17).

Uptake of 18F-fluciclovine also appears to remain stable and reproducible over time in lesions suspected to represent metastatic disease foci. In a retrospective cohort of 14 patients with BCR who underwent two 18F-fluciclovine PET/CT scans serially over a mean interval of 17 months without receiving any new or added forms of therapy based on the initial PET scan findings, there was no significant change in the degree of uptake of previously appreciated within the metastatic lesions compared to background structures (18).

Our review identified two studies comparing the diagnostic efficacy of 18F-fluciclovine to the PSMA monoclonal antibody, 111-In-capromab (ProstaScint). Schuster et al. prospectively evaluated 50 men with clinical evidence of BCR following primary local therapy by performing both 18F-fluciclovine and ProstaScint PET/CT within 6 weeks of each other. Using clinical information such as PSA nadir following salvage therapy and available confirmatory pathology as a reference standard, 18F-fluciclovine appeared to outperform 111-In-capromab in this setting. 18F-fluciclovine PET imaging demonstrated a more optimal sensitivity (89% vs. 69%) and specificity (67% vs. 58%) profile for prostatic bed recurrence. A similar pattern was observed for extraprostatic recurrence (sensitivity of 100% vs. 10%, specificity of 100% vs. 47%) (19). Similar conclusions were reached in a subsequent prospective analysis of 93 men with BCR. 18F-fluciclovine PET exhibited superior sensitivity to ProstaScint in the detection of both prostatic bed and extraprostatic PCa recurrence (90.2% vs. 67.2%, P=0.002 and 55.0% vs. 10.0%, P<0.001), but no statistically significant difference in terms of diagnostic specificity was observed (20).

We found two studies comparing 18F-fluiclovine to a novel PSMA-targeting radiotracer, 68Ga-PSMA-1. In a prospective cohort of 288 men with BCR where 68Ga-PSMA-1 PET/CT was being investigated, Calais et al. identified 10 patients who were found to have previously undergone 18F-fluciclovine PET scan imaging. In this subgroup, 18F-fluciclovine underperformed 68Ga-PSMA-1 in the detection of suspicious metastatic foci (2 vs. 7 positive scans) (21). The retrospective nature and small cohort in this study represent several limitations. Additionally, metastatic disease progression in the interval between the 18F-fluciclovine PET and 68Ga-PSMA-1 PET imaging could not be ruled out. However, a separate case report also describes a patient who underwent radical prostatectomy and salvage radiation therapy with subsequent BCR who had an unremarkable 18F-fluciclovine scan but significant uptake in a pelvic lymph node on Ga-PSMA PET/CT (22). Thus, a prospective trial is currently underway to compare these imaging agents in this clinical setting (23).

One case report compared a different PSMA-targeting radiotracer, 18F-DCFPyL, to 18F-fluciclovine. In this report a 79-year-old male with clinical evidence of BCR underwent both 18F-DCPyL and 18F-fluciclovine PET/CT. While radiotracer uptake at an area of extraprostatic recurrence was appreciated in both studies, the PSMA radiotracer exhibited superior lesion conspicuity but with greater background noise compared to the 18F-fluciclovine study due to very low levels of 18F-fluiclovine urinary excretion through the nearby ureters and urinary bladder (24).

Multiple studies evaluated the utility of 18F-fluciclovine PET imaging in the setting of post-prostatectomy salvage radiation therapy treatment planning. Brunocilla et al. were the first to report a case of clinically successful salvage radiotherapy in a patient who underwent 18F-fluciclovine imaging in the setting of BCR after prostatectomy where recurrent disease was identified in the prostatic fossa (29). Of note, the patient also underwent mpMR and 11C-choline PET imaging which both failed to identify recurrent disease. Extrapolating from a randomized prospective clinical trial of patients with BCR who were scheduled to undergo salvage radiotherapy, Schreibmann et al. reported that 30 of 41 men who underwent pre-treatment 18F-fluciclovine PET had alterations made to their planned radiotherapy target volumes (30). Two subsequent prospective analyses of 87 and 96 men reported significant augmentations to salvage radiation therapy dosing plans when pre-treatment 18F-fluiclcovine PET imaging was utilized (31,32). In all three studies, both the dosing amount and anatomical regions of focus were significantly impacted by the information provided by 18F-fluciclovine PET imaging.

In men who undergo treatment for localized PCa, at least one in five will exhibit some form of disease recurrence defined as BCR by means of serum PSA follow-up assessments (2). In this setting, numerous diagnostic imaging modalities exist to identify the location and extent of recurrence. 18F-fluciclovine PET was recently granted FDA approval for this purpose (8). Our aim was to summarize recent evidence evaluating the diagnostic utility of this imaging modality and to compare it to other available radiotracers.

In one of the largest studies evaluating the role of 18F-fluciclovine PET in patients with clinical evidence of BCR following local therapy for PCa, Bach-Gansmo et al. observed that this modality offers a reliable positive predictive value for detection of both local and extraprostatic disease recurrences (12). Kairemo et al. also reached similar conclusions in a smaller cohort (17). Furthermore, radiotracer uptake in both metastatic lesions and background tissue appears to remain stable over time, so providers could utilize this modality with confidence in the interpretation of the study results at any time point in the patient follow-up algorithm when PCa recurrence is suspected, though correlation with heightened sensitivity has been associated with higher levels of serum PSA in the post-treatment setting (18).

Conversely, there is a relative paucity of data evaluating the diagnostic accuracy of 18F-fluciclovine PET imaging in the setting of recurrent disease following various secondary interventions including salvage radiation or surgical interventions. Theoretically, the use of PET imaging should be equally valuable in these setting as sites of nodal or soft tissue involvement with PCa outside the operative field or irradiated space should be unaffected and hence physiologically equivalent for imaging with these radiotracers. Further investigation in this clinical setting as well as in the case of disease persistence or progression following androgen deprivation therapy, chemotherapy, immunotherapy, or other systemic therapy is critical in determining the clinical value of these PET imaging modalities after systemic treatments and potential clonal selection for subclones of PCa able to survive and progress through these treatment approaches.

Multiple PET radiotracers are available to assess disease burden in the setting of PCa BCR in addition to 18F-fluciclovine, namely an assortment of PSMA-targeting radiotracers and 11C-choline. Compared to ProstaScint, two prospective trials observed superior sensitivity and often specificity of 18F-fluciclovine for the detection of recurrent PCa foci (19,20). However, 18F-fluciclovine was inferior to 68Ga-PSMA PET in the detection of recurrent disease foci albeit in a small retrospective cohort and with comparison to only one of several actively investigated PSMA-targeting PET tracers (21). When compared alongside 11C-choline PET imaging, 18F-fluciclovine demonstrated superior recurrent cancer detection in two prospective analyses (25,26). While promising, the relatively small study population sizes, lack of consistent histological confirmation of recurrent disease foci detected on imaging, and novelty of these imaging modalities warrant further scrutiny in larger cohorts with long-term follow-up.

Beyond disease detection, we encountered several studies evaluating the role of 18F-fluciclovine PET imaging in guiding and mapping salvage external beam radiation therapy (30-32). All of these studies found that pre-radiotherapy 18F-fluciclovine PET augmented the location and intensity of administered radiation treatments. Furthermore, cases typically treated with salvage pelvic radiation with a distant focal metastatic site defined by PET imaging may obviate the potential side effects and complications of salvage radiation therapy to a presumed pelvic bed while allowing a more stereotactic approach to the “out-of-field” focus of metastatic spread versus systemic therapy for multifocal extra-template sites if present. Additional studies are warranted to elucidate whether these dosing changes had any impact on oncologic outcome.

In the setting of BCR following local therapy with definitive, curative intent for PCa, 18F-fluciclovine PET imaging is a safe and well-tolerated imaging modality with optimized diagnostic yield over standard staging imaging with CT and nuclear medicine bone scan. Further investigations comprising larger populations undergoing these PET imaging studies are warranted to support the early findings as its use expands in clinical practice.

Conflicts of Interest: S Rais-Bahrami serves as a consultant for Blue Earth Diagnostics and Philips/InVivo. The other author has no conflicts of interest to declare.