Male factors are responsible for approximately half of all infertility cases (1). However, with the advent of intracytoplasmic sperm injection (ICSI), little attention was given to evaluation of male partner of infertile couple and conventional semen analysis remained the only pillar in assessment of male patients despite all the pitfalls (2).

The attention to sperm function tests has returned in recent years. Emerging evidence about the role of sperm DNA integrity on fertilization, embryo development, implantation and pregnancy opens a new horizon in clinical andrology (3,4). Sperm DNA fragmentation (SDF) has been correlated with multiple factors mediated by a number of cellular events. Abnormal chromatin packaging during spermatogenesis, and sperm apoptosis during the final stages of spermatogenesis and epididymal transit, and oxidative stress have all been reported as etiologies of SDF (5,6).

While the importance of SDF has been acknowledged in the latest American Urological Association (AUA) and European Association of Urology (EAU) guidelines on male infertility, there seems to be insufficient evidence to support the routine application of SDF testing in the evaluation of infertile male (7,8). Although evidence supporting the use of SDF testing in some clinical scenario is steadily increasing (9-11), specific indications for the test still await further research. Recently, Agarwal et al. proposed practice recommendations on the clinical utility of SDF testing (12). The expert panel summarized the rapid advancements in SDF measurement and structurally presented, in an evidence-based approach, four clinical scenarios where SDF testing is most indicated. The publication serves as a useful reference for infertility specialists in identifying the clinical circumstances in which SDF testing should be of the greatest value.

This review intends to condense the essence of the practice recommendations and serves as a concise guide to the clinical utility of SDF testing. For the first part, an illustrative review about the available SDF tests are presented. In the second part, recommendations on the clinical utility of SDF tests in common clinical conditions are put forward by consensus of the expert panel. 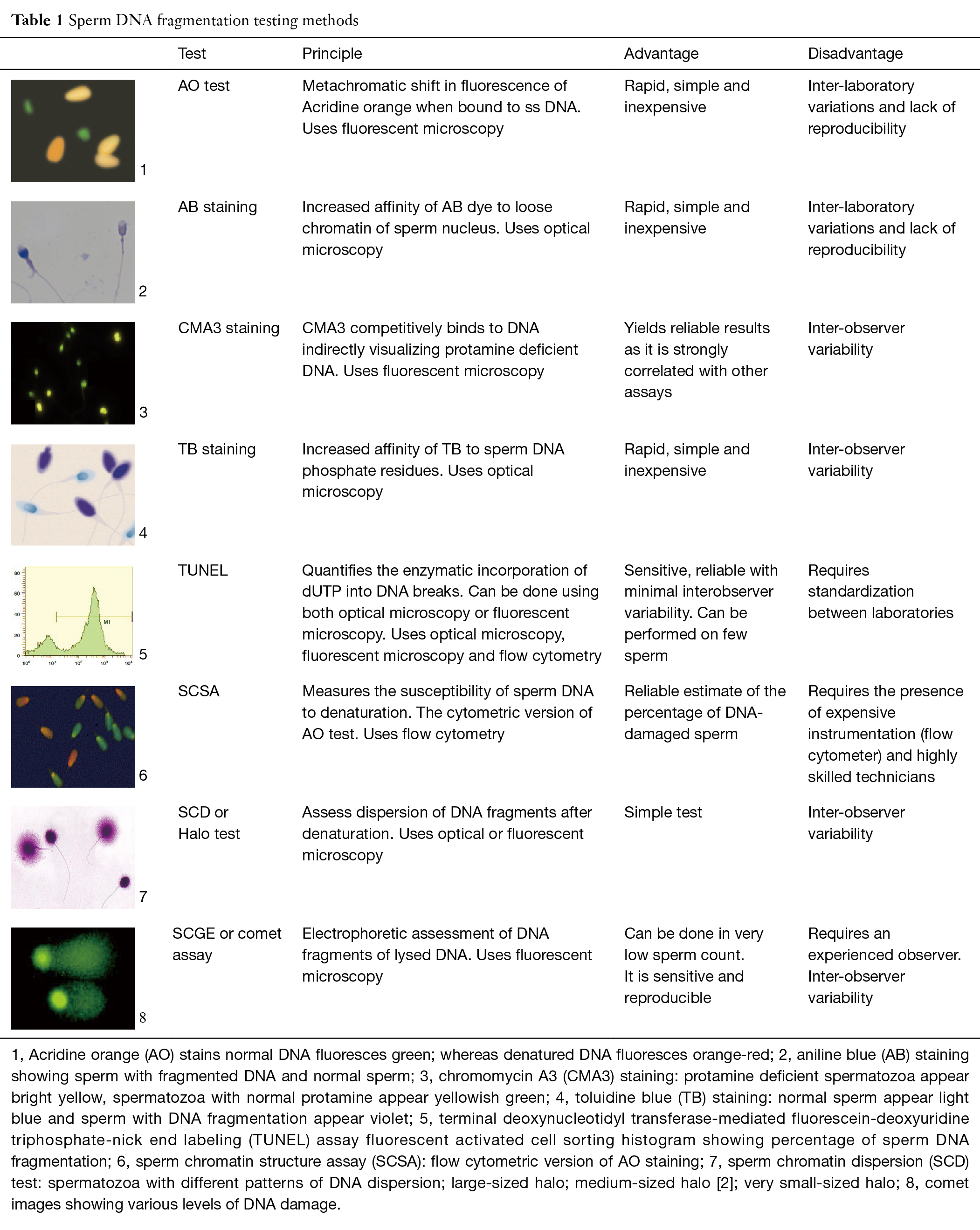 The SCSA measures the susceptibility of sperm DNA to denaturation. Acridine orange is added after the sample is exposed to heat or acids. The nucleic acid-selective cationic fluorescent dye interacts with double or single strand DNA breaks resulting in a metachromatic shift. The use of flow cytometry allows a large number of cells to be read rapidly and robustly (14). A standardized protocol of SCSA minimize inter-laboratory variation and represents an advantage of the technique. A clinical threshold of SDF index of 30% has been proposed for SCSA test (14). However, the requirement of expensive instrument and highly skilled technicians are the main obstacles for its widespread use (12).

TUNEL detects the incorporation of dUTP into double or single strand DNA breaks via an enzymatic reaction. The fluorescent nucleotides are evaluated with a standard fluorescence microscope or flow cytometry (15). The lack of strict standardization leads to difficult comparison of results among different laboratories and multiple cut-off values have been suggested by various studies (16). On the other hand, the highly specific and reliable assay with minimal inter-observer variability makes TUNEL the preferred technique of SDF testing (17).

Sperm with non-fragmented DNA following acid denaturation and removal of nuclear proteins forms a characteristic halo of dispersed DNA loops. Therefore, the lack of halo in sperm with fragmented DNA forms the basis of the SCD test, also known as the Halo test (18). The test does not require complex instrumentation but is prone to inter-observer variability due to the nature of subjective assessment under microscope.

Measurement of SDF provides a more comprehensive assessment of fertility status in general compared with conventional semen parameters (19,20). Further studies are required in elucidating the exact nature of sperm DNA damage picked up by various SDF tests. Refinement of test protocols and cut-off values for the tests will also better improve the precision of the techniques and decrease inter-laboratory variations.

The negative impact of clinical varicocele on semen parameters and overall pregnancy rate are well known (21). However, a substantial number of affected men are able to conceive without difficulties and better patient selection for varicocele repair is essential. The presence of varicocele leads to venous stasis and oxidative stress which is accepted as an important mediator in the development of SDF and testicular dysfunction (22). The association between varicocele and SDF in both infertile and fertile men has been reported (23). Moreover, the effect of varicocelectomy in reducing SDF and possibly improving natural conception is supported by a few studies (24,25). On the other hand, the relationship between SDF and varicoceles of different grades is unclear. While an improvement in SDF after varicocele repair is more consistently reported in clinical grade 2 and 3 varicoceles (26,27), the clinical utility of SDF testing in low grade varicocele is less reported (28). Along the same lines, the role of SDF testing in men with large varicoceles and otherwise so-called normal semen analysis is poorly studied. 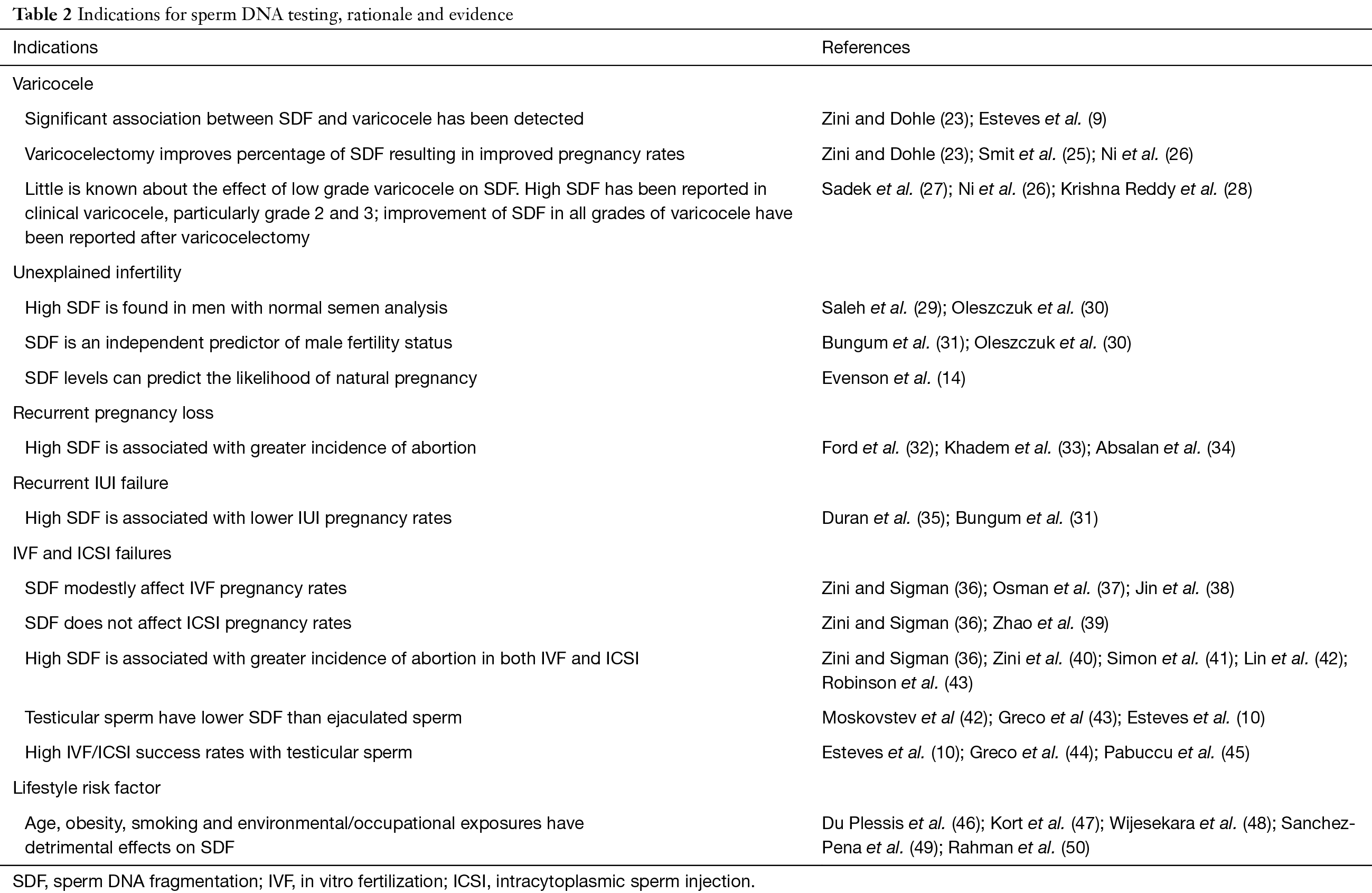 Unexplained infertility is thought to occur in 10-30% of infertile couples (51). It may signify the limitations of semen analysis in identifying the underlying etiologies and a search for new diagnostic tools is needed (52). The role of SDF as an independent predictor of male fertility status has been demonstrated (30,31). It is supported by an observation of impaired sperm DNA integrity in a proportion of men with unexplained infertility and normal semen parameters (29,30). Furthermore, SDF has been shown to be an invaluable prognostic tool of natural pregnancy and IUI success (14,31,35). A few studies also demonstrated a significantly higher SDF in couples with recurrent pregnancy loss (RPL) than controls (32-34).

As a result, it is reasonable to offer SDF testing in couples with RPL and the result may reveal the underlying etiology. SDF tests also represents an option prior to initiating IUI in view of the significant association between high SDF and lower IUI pregnancy rate (Table 2). A high SDF in couples with RPL or IUI failure may suggest the use of in vitro fertilization (IVF) or ICSI as the next treatment step (Table 3, grade C recommendation).

The relationship between SDF and outcomes of IVF/ICSI has been extensively studied. A modest but significant association between high SDF and lower pregnancy rates in IVF has been summarized by systematic reviews (36,37). The major criticism of the studies in the topic is related to the heterogeneous study design. Multiple potential confounding factors which may affect outcome measures were also not controlled. In fact, female factors contribute significantly to outcomes of assisted reproductive technology (ART) and the effect of SDF on IVF outcome is more pronounced in patients with reduced ovarian reserve (38) thus indicating that the oocyte has some capacity to repair DNA damage. In contrary, high SDF seems to have little influence on ICSI outcomes (36,39). Nevertheless, compelling evidence suggests a correlation between high SDF and pregnancy loss after both IVF and ICSI (36,40-43).

Several treatment strategies, including oral antioxidant, frequent ejaculation, and sperm selection techniques have been proposed to minimize the deleterious effect of high SDF on ART outcomes with varying success. While reduction of SDF has been demonstrated, the treatment effect on ART outcomes is largely uncertain. The use of testicular sperm represents a more promising strategy. It is believed that most SDF occurs during epididymal transit (53) and a significantly lower level of SDF has been found in testicular sperm than ejaculated sperm (44,54). Higher success rates in IVF/ICSI using testicular sperm has been reported in recent studies (10,44,45).

SDF testing can provide useful prognostic information on subsequent ART cycles in patients with recurrent ART failure (Table 2). The use of testicular sperm rather than ejaculated sperm in ICSI may be beneficial in men with oligozoospermia, high SDF and recurrent IVF failure (Table 3, grade B,C recommendation).

Modifiable lifestyle factors exert significant impact on SDF by inducing oxidative stress. Various chemicals in cigarette are found to cause sperm DNA damage (55,56). Indeed, higher SDF has been consistently demonstrated in smokers compared to non-smokers (57). Smoking has also been associated with impaired fertilizing capacity and risk of infertility (58,59). Obesity is another important risk factor of male infertility and abnormal semen parameters may occur due to a number of mechanisms (46). While a few reports did not find an association, larger studies reported a positive correlation between body mass index and SDF (47,60,61). Occupational and environmental exposure is another possible link to male infertility. Exposure to environmental chemicals, organochlorine pollutants and bisphenol A may alter sperm DNA integrity to different degrees (48-50).

SDF tests should be offered to infertile men with evidence of exposures to pollutants or found to have modifiable lifestyle risk factors (Table 2). The test result can reinforce the importance of lifestyle change, predict fertility and monitor patient’s response to risk factor modifications (Table 3, grade C recommendation).

Sperm DNA integrity is essential for human reproduction. Extensive research over the last two decades revealed the significant correlation between SDF and the chances of conception achieved naturally or by ART. SDF testing provides complementary information to semen analysis and both tests should be used in combination for a comprehensive assessment of infertile men. While more studies are needed in clarifying the role of SDF testing in clinical practice, there is currently evidence supporting the use of SDF testing in specific clinical scenarios, including varicocelectomy candidates, couples with recurrent pregnancy loss, patients with unexplained infertility, couples with failed assisted reproduction, and infertile men with exposure to modifiable lifestyle risk factors.