We would like to thank Dr. Cho for his insightful commentary on our article discussing the utility of sperm DNA fragmentation (SDF) testing for fertility evaluation (1). The author elegantly summarized the principle concepts of the article and provided his expert views of the topic. Dr. Cho rightly commented that “One of the major huddles of clinical application of a test lies in the lack of treatment modalities. And the development of treatment strategies, e.g., the use of antioxidants and sperm selection methods, must go hand in hand with advancement of sperm DNA testing which was also included in the guideline.” We certainly agree with his view on this point, especially since SDF testing has been criticized based on the unavailability of effective treatment modalities. In reply, we would like to highlight the existing available evidence on antioxidant use in patients with high SDF.

Recently published research has increased our understanding of how SDF affects male fertility (1). Sperm DNA is bound to protamine, allowing it to exist in a compact state. This arrangement helps protect the DNA against the damaging processes that can occur during sperm transport through the male and female reproductive tracts (2). Several factors have been shown to cause SDF; errors in chromatin packaging and remodeling that can occur during spermatogenesis (3), excessive ROS production, decreased seminal antioxidants (4), and other apoptotic events that take place during epididymal transit.

Other causes of SDF include environmental exposure to pollutants and chemo-radiation, conditions such as varicocele and infection and inflammations of the reproductive tract, lifestyle factors such as drug and cigarette use, and patient factors such as advanced age (5,6). Both in vitro and in vivo studies have confirmed that elevated SDF may negatively influence fertility by affecting fertilization, early embryo development, implantation, and pregnancy (7-10).

Antioxidants are readily available compounds that can be consumed through diet or as an oral supplement. They are easily accessible and the most common form of therapy prescribed for the treatment of male subfertility (11,12). Although a number of studies have documented an improvement in semen parameters with antioxidant supplementation, properly powered randomized placebo-controlled trials are still needed before establishing their clear role in human reproduction (13,14). A Cochrane review of 48 randomized controlled clinical trials that included 4,179 subfertile men reported considerable variability in the antioxidant effect on semen parameters. However, the review authors reported a statistically significant improvement in the live birth rate (OR, 4.21; 95% CI, 2.08 to 8.51; P<0.0001) and clinical pregnancy rate (OR, 3.43; 95% CI, 1.92 to 6.11; P<0.0001) (15). 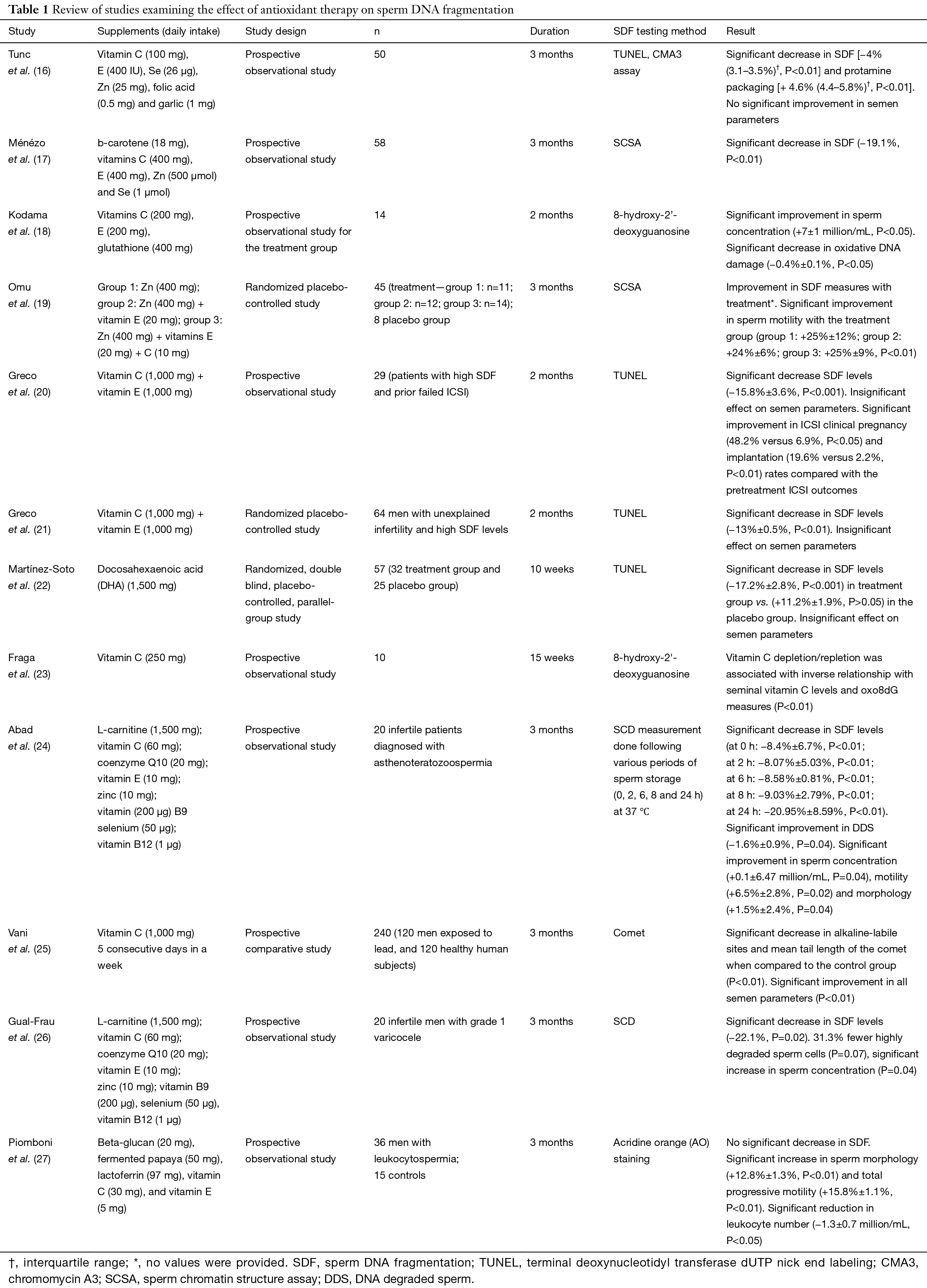 In general, while most reports were small sized and used short treatment protocols, they conveyed a beneficial effect for antioxidants on measures of SDF or semen parameter results (Table 1). Greco et al. (21) randomized 64 patients with unexplained infertility and elevated levels of SDF into either a treatment group (1 g vitamin C + 1 g vitamin E daily for 2 months) or a placebo group. Although semen parameters between both groups were not statistically significantly different, the percentages of SDF were lower (P<0.001) in the treatment group.

In another study, combination antioxidant therapy with zinc and selenium resulted in a statistically significant decrease in SDF by 19% (P<0.0004) (17). Kodama et al. (18) investigated the effect of vitamins C (200 mg) and E (200 mg) and glutathione (400 mg) on measures of sperm DNA oxidation, using the 8-hydroxy-2'-deoxyguanosine assay, in 14 infertile men. After a treatment period of 2 months the authors revealed a significant decrease in oxidative DNA damage (−0.4±0.1, P<0.05) together with a significant improvement in sperm concentration (+7±1 million/mL, P<0.05). Abad et al. (24) examined the effects of oral antioxidant therapy on the dynamics of SDF, measured with sperm chromatin dispersion (SCD), following various periods of sperm storage (0, 2, 6, 8 and 24 h) at 37 °C. A combination antioxidant regimen was used on 20 infertile men with asthenoteratozoospermia for a period of 3 months. In addition to finding a significant improvement in sperm concentration (P=0.04), progressive motility (P=0.002) and normal morphology (P=0.04), the authors also reported significant reductions in SDF measures at each experimental point (P<0.05). Moreover, a significant reduction in the portion of sperm with highly degraded DNA (DDS) damage was detected after antioxidant therapy (P=0.04).

Antioxidant therapy also seems to improve the outcome of intracytoplasmic sperm injection (ICSI) in patients with elevated SDF levels. Greco et al. (20) treated 29 patients with high SDF and a prior history of failed ICSI with vitamins C (1,000 mg) and E (1,000 mg) for a period of 3 months. While no significant effect was documented on conventional semen parameters, SDF levels significantly declined (−15.8%±3.6%, P<0.001). In addition, ICSI clinical pregnancy rates (48.2% versus 6.9%, P<0.05) and implantation rates (19.6% versus 2.2%, P<0.01) were significantly higher than pretreatment ICSI outcomes.

The utility of antioxidant therapy in patients with high SDF secondary to varicocele has been investigated as well. In one study, 20 infertile men with low grade varicocele and high SDF levels, measured with sperm chromatin structure assay (SCSA), were treated with a combination antioxidant regimen containing L-carnitine, vitamin C, coenzyme Q10, vitamin E, zinc, vitamin B9, selenium and vitamin B12 for a period of 3 months (26). The authors reported a significant decrease in SDF levels (−22.1%, P=0.02) and a significant increase in sperm concentration (P=0.04). After assessing the amount of highly DDS cells, the authors revealed that 31.3% fewer DDS cells were observed after antioxidant therapy (P=0.07).

While certainly further studies of larger sample size and superior design are still required, this brief review reveals that antioxidant therapy appears to be a reasonable option that can be used either solely or as part of a treatment strategy individualized to each patient’s clinical presentation.