In Western countries, approximately 15% of couples are infertile as defined by inability to conceive after one year of unprotected intercourse. Male factors are present in about half of infertile couples, either alone or in combination with female causes. Although many progresses have been made in last years in the field of human reproduction, male fertility and assisted reproduction techniques, both in basic research and diagnostic tools, standard semen analysis remains the mainstream for further decision-making investigations in infertile males. Indeed, semen analysis, when correctly executed following World Health Organization (WHO) guidelines (1), gives clinically important information not only on the fertility potential of a man but also on the general health status of the male reproductive tract. What it is erroneously thought is that diagnosis of male (in) fertility is completed after just semen analysis. Technology and assisted reproduction erroneously prompted the concept that full medical investigation for infertile men is not necessary and male infertility is often defined only based on semen analysis. Indeed, male infertility can be caused by a variety of aetiologies, and semen parameters merely represent the end point of different pathophysiologic mechanisms (2,3).

It should also clear that semen analysis is not necessarily equivalent to the fertility potential of a man, and in particular of the specific couple one is investigating. This is particularly evident in cases of couple infertility with normal semen parameters. It should also be stressed that not only semen analysis should be performed following the WHO recommendations (1), but also in a specialized laboratory that follow strict internal and external quality control program and by trained personnel. Pre-analytical, analytical and post-analytical factors could interfere with the reliability of the analysis and should be considered when interpreting the report.

In addition, from a clinical point of view it is important to note that WHO semen criteria are not “normal values” but rather “reference values” derived from population-based studies of less than 2,000 fathers (time to pregnancy ≤12 months) and are expressed as percentiles. Reference values are therefore just indications of the fertility status of a man, and parameters in the 95% confidence interval do not guarantee fertility, and on the contrary men who have semen parameters below the 5th percentile are not necessarily infertile. Furthermore, interpretation of semen analysis report should be done considering all parameters together and in the context of all the other clinical information of that particular patient. Semen analysis is not an etiological and pathophysiological diagnosis of male infertility, as it merely indicates the fertility potential and health status of the testes and seminal tract. Accordingly, no therapies should be initiated only based on semen analysis alone.

With this scenario, it is quite evident why in last years a number of tests have been proposed to assess sperm quality and function as parameters to be evaluated in conjunction to, or in addition to, standard semen analysis (3). Methods have been proposed to assess sperm DNA integrity, protamination and DNA packaging, DNA fragmentation, chromosome aneuploidy, mitochondrial function, apoptosis, and telomere length (4). Although contrasting data has been reported, it is increasingly evident that the integrity of sperm DNA is of vital importance for normal sperm function and embryo development (5,6). Tests for sperm DNA analysis, although not approved for routine investigation, could give additional information to standard semen analysis in specific conditions, especially when gross abnormalities on standard semen analysis are not present. Furthermore, they could give more detailed information on sperm in selected forms of male infertility. However, a number of problems still limit their routine use in the investigation of the infertile man (3,6). For many reasons therefore, international societies such as American Urological Association (AUA), European Association of Urology (EAU), National Institute for Health and Clinical Excellence (NICE) and American Society for Reproductive Medicine (ASRM) do not recommend sperm DNA fragmentation (SDF) in the evaluation of the infertile male (7-12).

In fact, the usefulness of these methods in the evaluation of male infertility and as prognostic markers for natural fertility and assisted reproduction is still debatable. This is due to many factors, including that different methods have been proposed and standardization has not been reached for some of them, normal values are yet under investigation and prospective studies have not been performed (6,13,14).

Most importantly, the term “DNA fragmentation” is often used inappropriately and the different tests proposed to evaluate it actually assess different DNA damages. Generally, the estimate of “DNA fragmentation” is expressed as the percentage of sperm with DNA damage with respect to the total number of sperm. However, most of them are not quantitative, that is they do not measure how much of the sperm DNA in each cell is damaged, and some of them also do not distinguish DNA fragmentation occurring in a single DNA helix from that occurring in both helixes (single strand vs double strand DNA breaks). The ideal test should obviously be a method directly assessing the amount of DNA damaged in a cell rather than one giving only the percentage of sperm with some fragmentation, irrespectively of the amount of DNA damaged. DNA damages might direct affect sperm function especially if they occur in the coding part of DNA, but might be relatively harmless if they are very few along the DNA and located in introns or regions of DNA not important for DNA functions. Again, none of the tests are able to distinguish these different conditions. Finally, the fundamental question is: how much of DNA fragmentation in sperm can be repaired by the oocyte? Although it is quite clear that the oocyte has a fantastic ability to correct sperm DNA damage, this ability is obviously dependent on the type and amount of DNA damage and on the function of the oocyte itself. Very few is known on this regard, although one can imagine that many factors can influence the oocyte ability to repair sperm DNA damage, both during natural conception and assisted reproduction technology, such as woman age. This consideration further stresses the concept that even the results of tests for DNA fragmentation should be considered in the context of the specific couple presenting for fertility consultation.

For the limitations outlined above, current guidelines do not support the routine application of DNA fragmentation test for clinical use (7-12). However, clinical practice and real-life studies suggest considering these tests (at least some of them with best sensitivity, specificity, reproducibility and predictive value) in specific conditions of male infertility.

In the article by Agarwal and colleagues (15), SDF testing is critically presented with some of the limitations expressed above and suggested for specific clinical situations for assisting andrologist and reproductive specialists in understanding the circumstances in which SDF could be of clinical value. The main assumption of this article and its clinical value lie in the worldwide exponential increase in last years in SDF analysis, unfortunately without actual clinical evidence of a real benefit (for the diagnosis and prognosis of male infertility) of the test and interpretation of their results. Indications for SDF suggested by the authors are varicocele, unexplained infertility, recurrent pregnancy loss, recurrent ART failure, and lifestyle risk factors such as ageing, smoking and environmental/occupational exposures. These clinical situations could actually represent good indications for SDF testing, but the grade of evidence for recommendation, as also reported in this article (15), is very low (grade C in most part) and based on poor quality studies (retrospective, case series, expert opinion). Although the number of publications dealing with SDF exponentially increased in last years (Figure 1), randomized, controlled, prospective clinical trials on this topic are lacking. From my point of view, SDF, also in such clinical conditions, should be performed especially in men presenting with normal semen parameters on standard semen analysis, as in these cases SDF could add information, and only after a careful diagnostic approach to the male partner of and infertile couple. As SDF might result from excessive reactive oxygen species (ROS) production and/or low seminal antioxidants, this test could also be informative for making decision on treating the infertile male with antioxidants and nutraceuticals (16). Another major prerequisite for appropriate interpretation of SDF testing is that laboratories use standardized methods, qualified personnel and quality control programs. 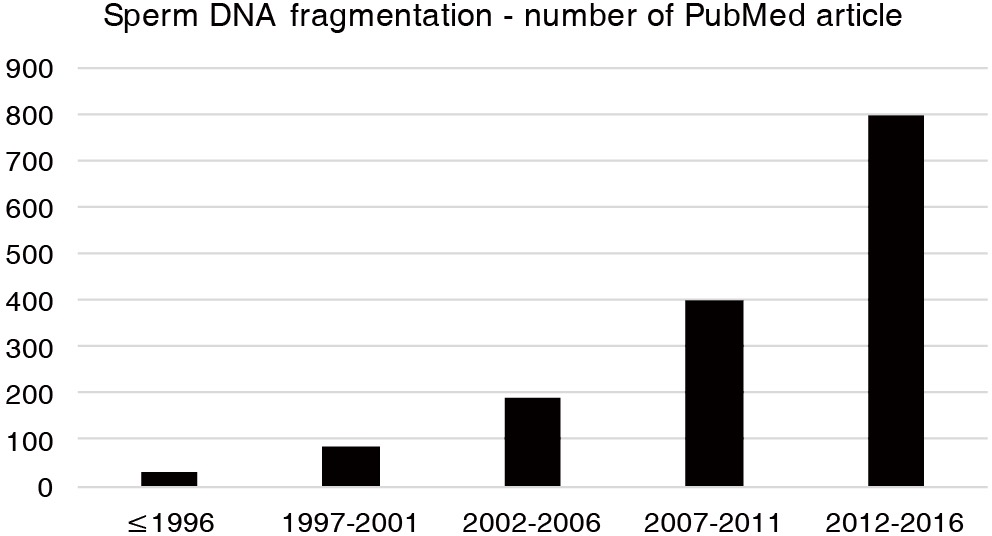