Clinical scenarios of unexplained sperm DNA fragmentation and their management

The article by Agarwal et al. (1), reviews the currently available tests of sperm DNA fragmentation (SDF) and discusses their use in different clinical scenarios. Here, we intend to relate the use of SDF testing to different clinical histories of couples attending with infertility problems, and to suggest a sequence of therapeutical choices according to the severity of sperm damage and its evolution in response to previously applied treatments. Particular attention is paid to situations in which the cause of SDF is not known or in which sperm DNA integrity does not improve after appropriate treatment of the supposed causative factor, such as varicocele or chronic genitourinary infection.

Advantages and disadvantages of the currently available tests for the evaluation of SDF, based on different optical, physical and chemical characteristics of intact and fragmented DNA, are reviewed in the article by Agarwal et al. (1) in this issue. These data can help choose the adequate test in different clinical settings. However, rather than the choice of the optimal type of test, the very question of whether and when a SDF test should be performed with respect to the history of infertility and the present clinical condition of each couple is to be raised. We can thus talk about more or less stringent criteria for the first application of a SDF test. However, objective scientific information defining the optimal conduct in different clinical scenarios is still poor, and more or less subjective decision is needed to try and avoid negligence, on the one hand, and overaction on the other. With this in mind, this paper evokes more and less stringent criteria, aware of the fact that future research is needed to enable their scientifically founded application in each concrete clinical situation.

In addition to cases in which the probable cause of sperm DNA damage is identified, excessive SDF also occurs in cases where no potentially harmful factors can be detected and in men with normal basic sperm parameters (1). Consequently, any infertile couple attending a fertility clinic for the first time may be affected by this condition. If a stringent criterion is applied, SDF testing may be performed in any infertile couple before starting assisted reproductive (AR) treatment (Table 1, scenario 1, option C). However, this is currently not the common practice. In fact, in the absence of known risk factors, SDF testing is usually performed after at least one unexplained ART failure (Table 1, scenario 1, option B). Omitting SDF testing in all cases with normal sperm and no apparent risk factors, irrespective of previous ART failure (Table 1, scenario 1, option A) could be considered a relative lack of stringency.

Table 1 Options of using sperm DNA fragmentation (SDF) testing, with or without other functional tests, in the context of different clinical scenarios, going from the less stringent (A) through medium stringent (B) to the more stringent (C)
Full table

In most clinics SDF testing is performed if at least one risk factor for increased DNA damage is present, even if basal sperm characteristics are normal (Table 1, scenario 2). This can be done before the first ART attempt (option B) after a previous ART failure (option A).

In centers equipped with instrumentation needed for motile sperm organelle morphology examination (MSOME) this test can be performed (Table 1, scenario 2, option C). MSOME-based modification of ICSI, commonly known as intracytoplasmic morphologically selected sperm injection (IMSI) can be considered in the next attempt (see below).

If one or more DNA-damage risk factors are associated with abnormal basal sperm parameters, the execution of a SDF test appears mandatory (Table 1, scenario 3). It can be performed alone (option A) or in combination with MSOME (option B). In clinics equipped with materials needed for physiologic ICSI (PICSI) using hyaluronic acid-selected spermatozoa (option C), the ability of spermatozoa to bind hyaluronic acid can also be examined to evaluate the usefulness of PICSI in the future treatment (see below).

As pointed out in the paper by Agarwal et al. (1), the treatment of the cause of SDF is the first option, provided that this cause can be identified. This is the case of varicocele or lifestyle risk factors, such as obesity, smoking and environmental/occupational exposures (1). Surgery for varicocele, weight loss, smoking cessation and improvement of work conditions may be sufficient to allow progressive normalization of sperm DNA status. However, if the probable cause of SDF cannot be identified, or if the above cause-directed lifestyle changes were unsuccessful, different treatment options may be considered and vary from noninvasive options (oral medication and sperm in vitro treatment techniques) through invasive ones (testicular biopsy) to the use of donor sperm as the last treatment option (Figure 1). 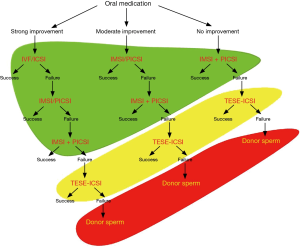 Figure 1 Decision-making scheme showing several treatment options for cases with sperm DNA fragmentation (SDF) in the framework of different clinical scenarios, beginning with noninvasive ones (green), passing through surgical ones (yellow) and terminating by the recourse to donor sperm (red).

The most commonly used oral medication regimens include the use of antioxidants (2,3). Because of its noninvasiveness, this treatment is a suitable first-line approach before resorting to more invasive or more complicated options (Figure 1). If positive results are achieved with antioxidants, an IVF/ICSI attempts can be planned, eventually by using new modifications of the ICSI technique—IMSI, PICSI or both (Figure 1).

IMSI was originally developed for cases of severe teratozoospermia (4), but it was later shown to be useful also for cases of SDF (5-7). Similarly, the PICSI technique, based on the ability of spermatozoa to bind hyaluronic acid and originally intended to provide a more physiological means of sperm selection as compared to conventional ICSI (8,9), has later been shown to enable an efficient selection of spermatozoa with undamaged DNA, too (10-12). IMSI and PICSI can be used as alternative options, sometimes according to previous MSOME and PICSI testing (Table 1), or sequentially on the same spermatozoa as the most robust laboratory selection technique for the most severe cases of SDF (Figure 1). The option of using IMSI, PICSI, or a combination of both can also be considered in other, less severe cases of SDF after conventional ICSI failure (Figure 1). With the use of these techniques the possibilities of noninvasive treatment offered by laboratory workup (green zone in Figure 1) are exhausted, and the recourse to testicular sperm extraction (TESE) for ICSI (yellow zone in Figure 1) can be considered as the following step in case of failure.

Spermatozoa recovered from the testis by TESE have been shown to have less fragmented DNA as compared to ejaculated spermatozoa from the same men (13), and their use in cases of high incidence of SDF enables higher pregnancy and birth rates as compared to ICSI with ejaculated spermatozoa (13,14). The recourse to donor sperm (red zone in Figure 1) is usually reserved to the most severe cases in which both the noninvasive and the invasive methods using the patient’s own sperm failed.

The therapeutic decision-making algorithm presented in Figure 1 should be considered an availability-based suggestion rather than an evidence-based guideline, and a multicenter study on different diagnostic and therapeutic approaches and their outcomes is highly recommended. In any case, the final decision as to the choice of the adequate ART method for patients with pathological SDF figures has to be taken with regard to the overall clinical context of each case. In addition to the degree of SDF, this consideration should take into account other parameters, such as female age and ovarian reserve, the duration of infertility, the number of AR attempts prior to the first diagnosis of SDF, eventual presence of female pathologies which might be at the origin of pregnancy complications, etc. Several intermediate steps mentioned in Figure 1 can be left out, and the more efficient treatment modalities can be used in certain clinical conditions without fully exploiting less invasive or simpler methods. For instance, rapid recourse to more efficient techniques appears reasonable in cases of advanced maternal age and poor ovarian reserve (better economy of the remaining ovarian potential) as well as in the presence of risk factors acting during pregnancy (limiting unnecessary patient exposure during failed pregnancies leading to spontaneous abortions). On the other hand, less invasive techniques can be chosen in cases of very low maternal age or when donor oocytes are used, since oocytes are known to possess a DNA-repair machinery (15) and it has been reported that good-quality oocytes from young women are capable of repairing, to a certain extent, sperm DNA damage (16).

Taking into account the serious complications that can be caused by excessive SDF both in natural conception and after ART (1), testing spermatozoa for DNA integrity should be considered in all cases of previous fertility problems, although certain clinical scenarios are associated with higher risk, thus making SDF testing hierarchically important. Many different tests for SDF can be used, and all appear valuable provided that the internal cut-off reference values for their interpretation are given in the results sheet. Treatment modalities for excessive SDF are available, going from noninvasive ones, based on oral medication or specific laboratory workup, through invasive surgical interventions, and ending, in cases of repeated failure, to the recommendation of using donor sperm in most severe and treatment-resistant cases. The choice of the optimal treatment option must be individual, taking into account the overall clinical history and the cultural, social and psychological background of each couple concerned.