Urethral stricture disease is a condition that affects 300 per 100,000 males and its surgical treatment can represent a challenge (1). Several approaches including direct visual internal urethrotomy (DVIU) and anastomotic or augmentation urethroplasties based on the use of flaps and graft have been reported (2). Barbagli described the dorsal onlay free graft urethroplasty in 1996 and since then graft urethroplasty has gained worldwide application for the treatment of penile and bulbar urethra strictures (3,4). Modifications to this technique include dorsal inlay, dorso-lateral and ventral onlay graft urethroplasty; the choice between the different approaches should take into consideration the characteristics of the stricture and the preference of the surgeon performing the procedure (5,6). Different grafts have been described including full thickness skin graft and mucosal graft: buccal mucosa graft (BMG) has found a wide use in the field of substitution urethroplasty offering the advantage of being hairless, accustomed to a wet environment and easy to harvest (7).

The long-term success rate for augmentation anterior urethroplasty using free graft has been demonstrated to range between the 73% and 90% and the chances of recurrence are related to the stricture site, length and etiology (8-11).

The aim of this study is to report the experience of a tertiary referral centre in the management of anterior urethral stricture and to determine risk factors for stricture recurrence and complications in all patients having buccal mucosal graft (BMG) urethroplasty.

We have retrospectively reviewed a prospectively gathered database of 128 BMG urethroplasties performed between 2001 and 2015 in a tertiary referral centre by the same surgeon (TJG). Sixty-six patients had a stricture of the bulbar urethra and in 62 the stricture was localised in the penile urethra. Ninety-seven (75.7%) patients reported a history of recurrent stricture: previous DVIU/urethral dilatation and urethroplasty were recorded in 55 and 37 patients respectively. All patients had flow-rate (FR), post-void residual (PVR) and ascending/descending urethrogram preoperatively.

All the patients having a bulbar urethroplasty were discharged home after a 23-hour stay unless social problems prevented this (4 patients) with a 16 Ch silicone indwelling urethral catheter: 3 weeks after the procedure a pericatheter urethrogram was routinely performed and the catheter removed if healing was confirmed (Figure 1A,B). For those patients with leakage documented on urethrogram, further weekly urethrograms were performed until healing was documented and catheter removed (all <6 weeks).

The BMG harvesting was preceded by a submucosal injection in the donor site with a solution containing xylocaine 2%/adrenaline 200:000. The size of the graft was proportional to the stricture length with a standard 2.5 cm width; for long strictures bilateral cheek BMG was harvested. After accurate haemostasis with bipolar electrocautery the donor site was left open and a compressive gauze was left in situ and removed in the recovery area. A benzydamine hydrochloride based mouthwash was recommended post-operatively in all patients for 3 weeks, 3 times daily.

FR and PVR were repeated in the outpatient department at 3, 12, 24 and 36 months post-surgery (post second stage in case of penile urethroplasty). Patients were thereafter instructed to contact us on an as required basis if they had any concerns or symptoms. A routine ascending/descending urethrogram was performed in all patients at 3 weeks and 12 months post-surgery.

The mean age was 42.8 years (range, 16–74 years). After an average follow-up of 45 months (range, 3–159 months) the re-stricture rate observed was 19% (n=24). The mean time to re-stricture was 25.4 months (range, 3–60 months). The management in case of stricture recurrence was clean intermittent self-catheterization (CISC, n=7), urethral dilatation/DVIU (n=13), perineal urethrostomy (n=5), long-term SPC (n=2) and re-do urethroplasty (n=4). Post-operative complications were reported in 16 patients (12.5%) (Table 1). The most frequent complications recorded were urinary fistula (n=4; 3.1%), graft contracture (n=4; 3.1%) and graft failure (n=4; 3.1%), all reported after penile urethroplasty. Spontaneous healing of the urinary fistula occurred in one patient and a fistula repair was necessary in 3 (2.3%). A graft re-do was performed in 4 (3.1%) patients due to severe contraction while in 3 cases (2.3%) graft release was performed at the same time as the second stage.

PMD and ED >12 months were evident in 16% (n=20) and 12.5% (n=16) respectively. PMD was managed conservatively in all patients. A penile Doppler US was performed in patients with ED >12 months and an organic cause was excluded in all cases: treatment based on oral PDE5 inhibitor was successful in all patients. One patient (0.8%) with a severe scenario of BXO with previous multiple reconstruction underwent penile urethroplasty complained of an unsatisfactory cosmetic result of the penile wound but considering the successful functional outcome he refused further revisions.

At the univariate analysis significant factors for stricture recurrence were demonstrated to be age at surgery, aetiology, stricture length and site.

A statistically significant increasing risk for failure was observed in patients of 31–50 years of age (15.2%; n=9) and >50 years (35.1%, n=13) compared to patients <30 years who developed a recurrence in only two cases (6.3%). BXO was also predictive of treatment failure: of the 24 patients with a penile stricture related to this condition 10 (42%) had stricture recurrence.

We have classified the stricture length as <4 cm (n=68), between 4–8 cm (n=39) and >8 cm (n=21): for strictures shorter than 4 cm recurrence was observed in 7.4% (n=5) while the failure rate was 20.5% (n=8) and 34% (n=11) respectively for the latter two groups. Significant differences in stricture recurrence have been demonstrated according to the site of the disease: of the 66 patients with a bulbar urethral stricture only 8 (12.1%) presented a recurrence during the follow-up period while stricture recurrence was recorded in 16 (25.8%) of the 62 patient with a penile stricture. On multivariate analysis penile site was the only significant independent variable for re-stricture.

Penile stricture site was also associated with a higher risk of complications: of the 16 complications recorded, 14 were observed after penile urethroplasty. One case of perineal haematoma and one case of secondary mouth bleeding were the only complications recorded in the bulbar urethral stricture group. A significant difference at the univariate/multivariate analysis for PMD and ED has not been found according to age, aetiology and stricture site and only stricture length was associated with a higher incidence (Table 2). 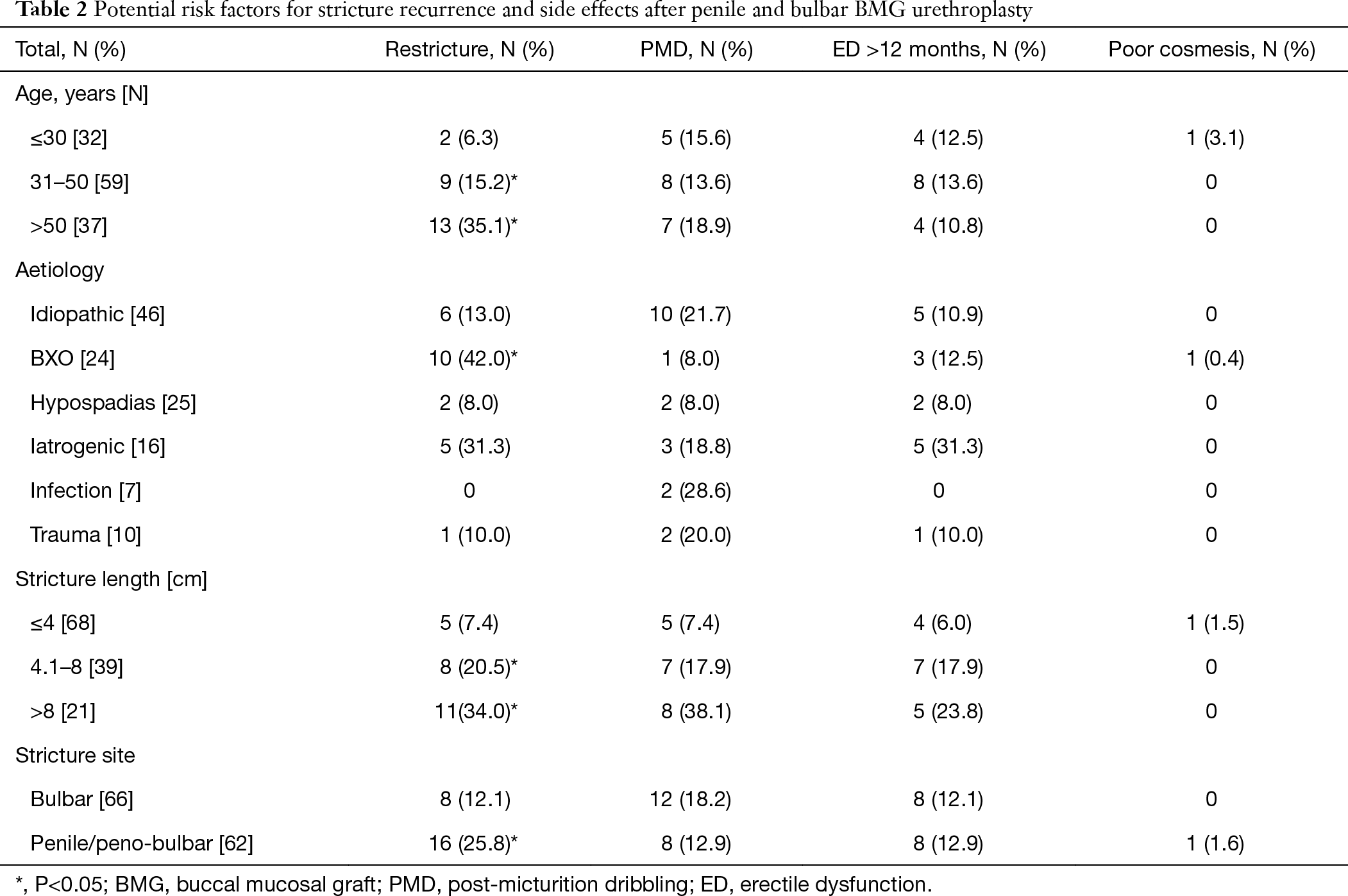 The use of free graft for augmentation urethroplasty became popular after the publication of Barbagli and McAninch series (3-12). Between the skin and mucosal graft described for this purpose, BMG have many advantages including a rich submucosal plexus that enhance good take, lack of hair and a wet epithelium. Barbagli described the dorsal onlay graft urethroplasty in 1996 in 12 patients, reporting a successful outcome in all patients (3). Morey and McAninch reported similar results in 13 patients who underwent ventral onlay BMG urethroplasty for anterior urethral stricture (12). Barbagli more recently reported the 80.2% long-term success rate for dorsal onlay bulbar urethroplasty using BMG (11). Variations to this approach have been reported by Kulkarni, with success rates up to 92% (6,13). In 2008 a multicenter retrospective analysis by Barbagli and Kulkarni (11) showed a long-term success rate of 73.8% and 74.1% in 359 patients who had undergone bulbar and penile augmentation urethroplasty respectively, using penile skin or oral mucosal graft. Asopa described the dorsal inlay free graft urethroplasty and with this technique excellent results up to 87% of success rate have been reported (5-14). Comparable outcomes between dorsal onlay and dorsal inlay have been demonstrated in randomised trials and systematic reviews (2-15). In the present series we have reported our experience in the treatment of penile and bulbar urethral stricture with graft augmentation urethroplasty. We performed dorsal onlay BMG urethroplasty according to Barbagli technique for bulbar urethral stricture. Dorsal inlay BMG urethroplasty for strictures of the penile urethra using the Asopa technique was the approach of choice if an adequate urethral plate was available otherwise a total graft substitution of the urethra with excision of unhealthy tissue was performed. Our success rate for bulbar urethral stricture has been 87.9% while for strictures of the penile urethra the cure rate was 74.2%. Penile site was predictive for failure in univariate and multivariate analysis according to our results. Controversial results in terms of stricture location and treatment outcomes have been demonstrated. Wang et al. (16) confirmed in their meta-analysis a lower success rate for penile urethral repair compared to bulbar urethral repair (77.6% vs. 87.4%) while Barbagli (11) in a recent retrospective review showed comparable results between penile and bulbar urethroplasty. Penile urethroplasty can be a simple procedure in the case of a normal penis, but its treatment can be challenging and can have higher risks of failure in men presenting with failed hypospadias repair and severe BXO. In our series the penile urethroplasties were performed in complex strictures: 37 (59.6%) patients were referred to us with a recurrent disease; 24 (38.7%) had BXO and 23 (37%) had previous hypospadias repair. Aetiology, stricture length and multiple previous treatments have been shown in our series to correlate with the outcomes of treatment and similar outcomes have been demonstrated in other series. Barbagli showed after multistage penile urethroplasty for failed hypospadias repair a successes rate of 67.7% (17). Patel et al. (18) in their retrospective review on 79 patients affected by penile and bulbar urethral stricture secondary to BXO recorded a success rate of 76% in the case of 2-stage BMG urethroplasty and 75% after one-stage, results comparable to those observed in our series. Breyer (19) showed that previous urethroplasty was predictive of treatment failure in their retrospective series of 443 patients. The same author also showed that stricture length >4 cm was associated with recurrence. Kinnaird (20) reached similar conclusions in a large retrospective review of 604 patients treated for anterior and posterior urethral strictures in which lichen sclerosis (aka BXO) and stricture >5 cm were associated with higher stricture recurrence rates. Meeks (21) demonstrated in a systematic review that there was a significant difference in failure rate (12.4% vs. 16.6%) between strictures shorter than and longer than 5 cm. We have confirmed this association in our series: only the 7.4% of patients with a stricture <4 cm had a recurrence during follow-up whilst the failure rate for strictures between 4 and 8 cm was 20.5% and for those longer than 8 cm was 34% (P<0.05).

We have observed better stricture treatment outcomes in patients <30 years with recurrence in only two cases (6.3%) compared to patients of 31–50 years of age (15.2%) and >50 years (35.1%). A significant association between age and recurrence rate has not been found according to our knowledge in other series. Santucci et al. (22) did not find a statistically different success rate in 70 elderly patients undergoing urethroplasty. Similarly, Barbagli, in patients having bulbar urethroplasty, showed a success rate of 89.9% in patients younger than 65 years compared to 100% in patients older than 65 years (23). No differences according to age have been reported by Kulkarni in 24 patients undergoing one-sided anterior urethroplasty (6).

We have observed a complication rate of 12.5% and these occurred mainly in the penile urethroplasty group (11% vs. 1.5%). Urinary fistula, graft contracture and graft failure were the most common. The revision rate including re-do urethroplasty for recurrent stricture was 24.2% (n=31). Mori et al. (24) reported an overall complication rate of 19.2% and a revision rate of 10.3% in 78 patients who underwent multistage reconstruction for complex anterior urethral strictures. The revision rate in contemporary series ranges from 6.7% to 59% and our results are in line with literature (25,26).

BMG urethroplasty represents a reliable therapeutic option for patient with anterior urethral strictures with a success rate of 81% at 45 months of follow-up. Complications are more common in complex stricture of the penile urethra. Adverse outcomes including PMD and ED >12 months were rarely reported and managed conservatively. ED was not organic in origin. Univariate analysis indicated that age at surgery, stricture length, site and aetiology were all significant risk factors for stricture recurrence. On multivariate analysis, penile site was the only significant independent variable for re-stricture.

Ethical Statement: The study needs no approval of the Institutional Review Board (IRB) due to containing no samples from patients.