In this issue, Agarwal and colleagues (1) have attempted the Herculean effort of sifting through hundreds of publications and several meta-analyses of those publications to answer a question that continues to plague clinicians in artificial reproduction technologies (ART) clinics. Simply stated, the question is “When is it appropriate to ask patients to spend more money to obtain a diagnosis of the status of DNA damage in the sperm as a tool for both the patient and clinician to decide on a course of treatment?”. They have also addressed a second, more difficult, question, although not as thoroughly because the data are just not there, which is, “If we do decide to assay sperm DNA damage, which test(s) would we use?” This problem continues to be debated in the literature with the general conclusion that there is a role for sperm DNA damage assessment but it is limited (2,3). Even though I am not a clinician, I have been privy to enough discussions on this issue with clinical colleagues to know that it is a troubling one. It takes time in an already crowded clinical day to explain to the patients what the test is and why they need it, and then why they should add this expense to their already high cost for treatment.

The issue for the clinician is making sense of the plethora of literature about how to apply the available tests for sperm DNA fragmentation (SDF) and which ones to use. The ART clinician may be excused for not having a good resource to which to refer when making this decision. The authors of this analysis entitled “Clinical utility of SDF testing: practice recommendations based on clinical scenarios” are all experienced clinical ART practitioners who have published extensively in this field. They have provided the ART clinician with an up-to-date summary of how eight different most commonly used SDF assays have been shown to be important for specific scenarios and have provided four recommendations for the application of SDF assays in the clinic. They also provide a level of confidence based on defined parameters of the evidence with A being the highest and C being the lowest. It is worth noting that none of the four recommendations received a Grade A level, and this reflects both the variety of the tests available, and the variation in study design of all the publications that are available for review.

As a basic scientist interested in chromatin structure, it is difficult not to address the assays themselves and how they might measure different aspects of DNA packaging. We have proposed a model for mammalian sperm chromatin structure based on available evidence in the literature (4). Human sperm chromatin is divided into three major components: (I) 90% of the DNA is tightly compacted by protamines into toroids that each contain 20 to 50 kb of DNA (5), (II) about 10% of the DNA is packaged by histones (6) which we predict to be located at the sites that link the protamine toroids (7), and (III) nuclear matrix attachment sites (8,9). We have predicted that the terminal deoxynucleotidyl transferase dUTP nick end labeling (TUNEL) assay primarily assays the protamine toroid linker DNA (Figure 1B). The sperm chromatin structure assay (SCSA) specifically removes histones, and probably some, but not all protamines, with acid extraction, thereby exposing histone bound DNA to denaturation required for the assay’s test of SDF. SCSA can assay the linker region and some damage in the protamine packaged toroids (Figure 1C) (10).This is probably due to the fact that the dye used to assay DNA damage in the SCSA test is much smaller than the enzyme used in the TUNEL assay, so it’s access to the DNA is not sterically hindered. The acridine orange (AO) test would have the same access to packaged DNA damage as the SCSA. The COMET assay is the only test that completely disrupts the both the histone and protamine packaging exposing naked DNA to the assay (Figure 1D) (11), however, this assay still depends on the attachment of the DNA to the nuclear matrix (12). CMA3 (13), TB or AB (14) staining do not appear to have a solution that removes histones, so these dyes must all assay the chromatin in its natural state. As such, one would expect the histone bound regions of the DNA to be more accessible to the dyes than the protamine bound regions. These are the regions of sperm chromatin that might also be expected to be more susceptible to DNA damaging events. Of the eight tests that Agarwal and colleagues (1) mentioned, the SCD is the only one for which we cannot guess the particular chromatin site that is affected because the extraction solution remains proprietary and undisclosed (15). However, given the halo appearance of the control, undamaged DNA, one might suggest that it is similar to the comet assay in exposing all the DNA to the test. 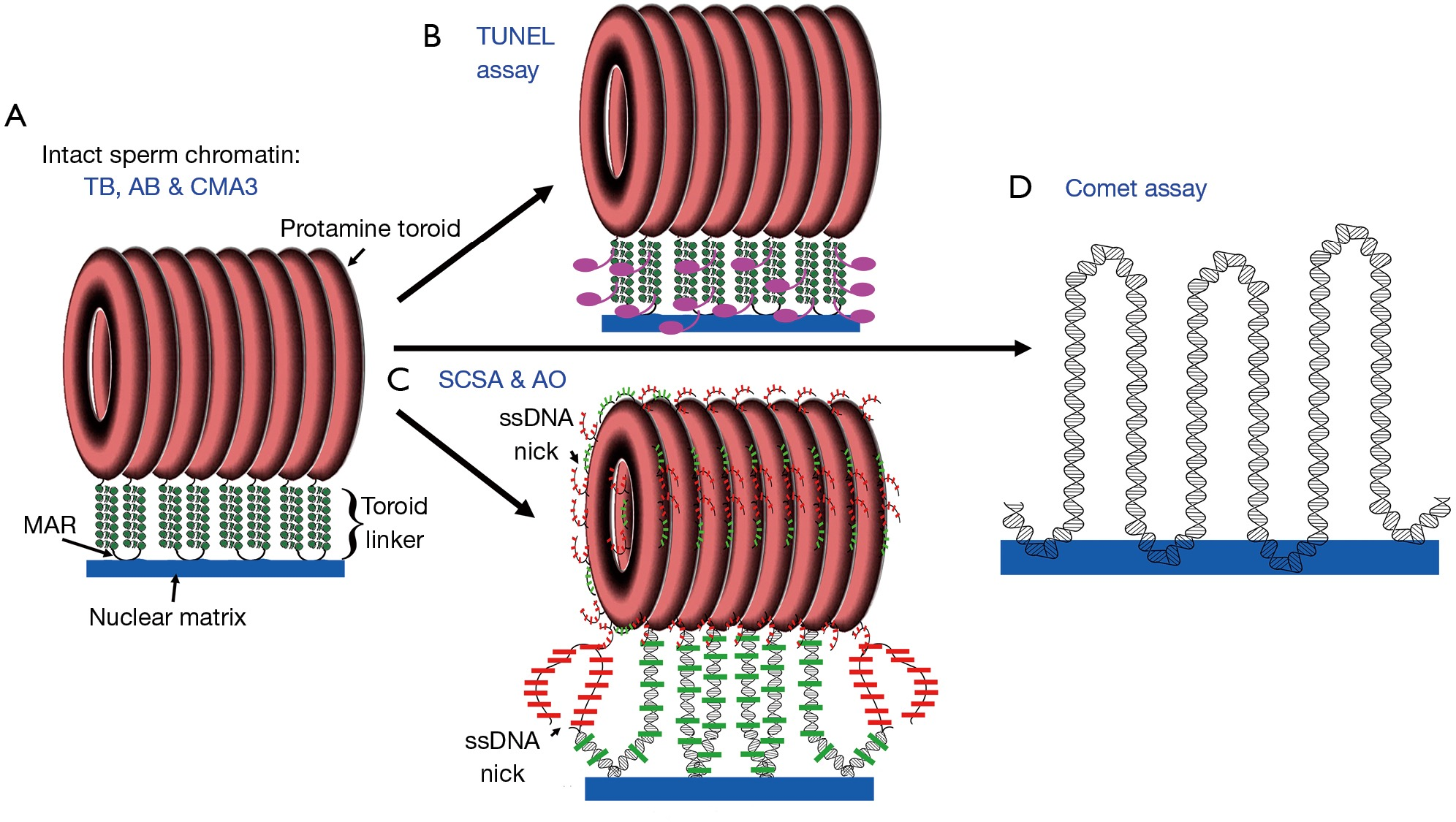 Figure 1 Sperm chromatin structure and SDF assays. (A) Intact sperm chromatin is condensed into protamine-bound toroids that are linked by short stretches of the chromatin and anchored to the nuclear matrix. TB, AB and CMA3 tests all assay DNA in its intact state; (B) the TUNEL assay also measures DNA damage in situ; (C) the SCSA and AO tests assay sperm chromatin from which the histones have been removed; (D) the Comet assay assesses DNA from which all the protamines and toroids have been removed. This image is modified from one by Gawecka, et al. (10). SCSA, sperm chromatin structure assay; TUNEL, Terminal deoxynucleotidyl transferase dUTP nick end labeling.