We read with interest the commentary by Drs. Jan Tesarik and Maribel Galán-Lázaro (1) regarding the recently published practice recommendations for sperm DNA fragmentation (SDF) testing based on clinical scenarios by Agarwal et al. (2).

Drs. Tesarik and Galán-Lázaro advocate the use of SDF testing in all cases of fertility problems based on the potentially dangerous implications of damaged DNA to both natural and assisted conception. Notwithstanding, the authors recognize that certain clinical scenarios pose a higher risk to the couple, and therefore contributed an algorithm to guide clinicians in ordering the test and managing affected men (depicted in Table 1 and Figure 1 in their article).

As the reader will see by examining their proposed algorithm, two techniques for deselecting sperm with damaged DNA, namely, motile sperm organelle morphology examination (MSOME) and physiologic ICSI (PICSI) using hyaluronic acid-selected spermatozoa, received a significant amount of attention. In this article, we discuss the existing laboratory strategies to remove sperm with damaged DNA for use in association with intracytoplasmic sperm injection (ICSI).

To our knowledge, there is only one study that compared interventions aimed at selecting sperm populations with better DNA integrity for use with ICSI (3). In this report, Bradley et al. retrospectively evaluated 448 ICSI cycles from couples whose male partners had high levels of SDF. Sperm injections were performed with either ejaculated sperm or testicular sperm. In the ejaculated sperm group, the authors applied interventions to reduce SDF including IMSI, PICSI, and frequent ejaculation, and compared outcomes with a control group of ‘no intervention’. They also compared the results of ICSI using ejaculated sperm with and without intervention to testicular sperm (Testi-ICSI), and found higher live birth rates (P<0.05) with Testi-ICSI (49.8%) than IMSI (28.7%) and PICSI (38.3%). The lowest live birth rates (24.2%) were achieved when no intervention was carried out to select sperm with intact DNA (P=0.020). Notably, the utilization rate, calculated as the proportion of embryos available for transfer or cryopreservation per zygotes, was significantly higher among men subjected to ICSI with testicular sperm than ejaculated sperm (54.7% vs. 43.8%). This study adds to the existing evidence suggesting an advantage of testicular sperm in preference over ejaculated sperm for ICSI to selected men with confirmed high SDF in semen. Unfortunately, this study did not provide data on the magnitude of SDF reduction after each intervention modality.

However, studies examining the effectiveness of laboratory strategies to reduce SDF do exist. Shortening the ejaculatory abstinence, repeated ejaculation, and density centrifugation, alone or combined, have shown to provide a reduction in the proportion of sperm with damaged DNA ranging from 22% to 47% (4-7). Likewise, swim-up has yielded a reduction of about 35% in the proportion of DNA damaged sperm (7,8). On the contrary, techniques such as magnetic cell sorting (MACS), PICSI and IMSI have brought about conflicting results; while some studies have found reduction in SDF rates by applying these techniques, others have failed to show any benefit (9-13) (Table 1). There are also concerns about the longer duration of sperm incubation at 37 degrees Celsius with these procedures, which may itself increase SDF. Additionally, IMSI and MACS relies on the availability of expensive equipment and skilled technician. Recent studies with ICSI have indicated no significant differences in fertilization, pregnancy, quality of embryos, implantation rates, miscarriage rates and live birth rates in samples prepared with or without MACS, IMSI and PICSI, although the evidence is not unequivocal (reviewed by Rappa et al.) (14). Notably, these methods have been applied to an unselected population of men undergoing ART regardless of SDF rates. It is possible that strict inclusion criterion of only men with high SDF may avoid diluting the effect size of some of these techniques, a hypothesis that deserves further investigation. 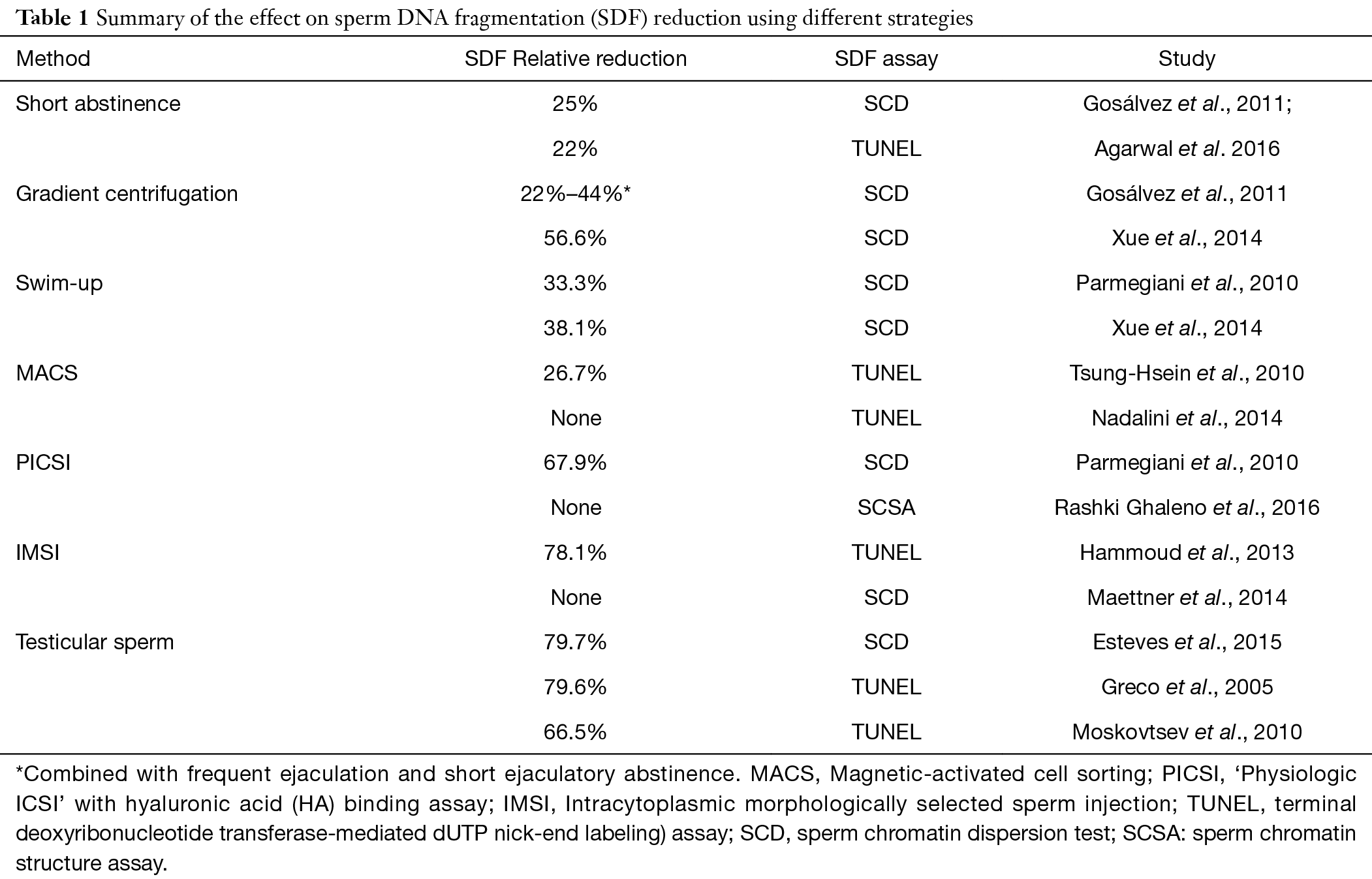 In addition to the laboratory strategies to identify and remove sperm with SDF, the use of testicular sperm in preference over ejaculated sperm for ICSI has also been attempted. In this regard, few studies have examined SDF in ejaculated and testicular sperm of men with confirmed high SDF in the neat ejaculate (15-17). Interestingly, the relative reduction in SDF ranged from 66% to 80%, thus markedly greater than the techniques discussed above. It is therefore of no surprise that the study of Bradley et al. have found higher live birth rates with Testi-ICSI than IMSI and PICSI (3). Nevertheless, the synergistic effect of combining techniques to select sperm populations with better DNA integrity, such as short ejaculatory abstinence and PICSI/IMSI, or testicular sperm and IMSI, is yet to be studied. Equally important is to evaluate the economic advantage of these interventions. Differences in specific costs per procedures may differ between clinics and countries, as well as the availability of instrumentation and skilled workforce, all of which need to be taken into considerations in a cost-effectiveness analysis.

The study of Esteves et al. has shown that the number needed to treat (NNT) by testicular compared to ejaculated sperm to obtain an additional live birth per fresh transfer cycles was 4.9 (95% CI: 2.8–16.8) (15). In other words, if we need to treat about five patients with Testi-ICSI to obtain an additional live birth, it means we could avoid one out of five oocyte pick-ups. It would also be interesting to investigate the effect of the laboratory techniques discussed above using NNT calculations.

Lastly, although the existing interventions can be overall useful to remove sperm with DNA damage, none of them can get rid of 100% damaged sperm (18) (see Table 1). A technique that applies a neutral dye capable of identifying damaged and non-damaged sperm is currently not available. Consequently, research efforts should be made to find methods to analyze live sperm and select those with intact chromatin for ICSI. Given the clear association between DNA damage and pregnancy outcomes, any laboratory method or therapeutic strategy to minimize SDF should be considered as an attempt to improve the sperm capacity for promoting normal embryo development and healthy offspring. However, due to the paucity of high-quality evidence, physicians and their patients should be aware of not only the possible advantages but also the limitations of these interventions.