Evaluation of sperm DNA structure, fragmentation and decondensation: an essential tool in the assessment of male infertility

The intrinsic primordial role of the oocyte in contributing to successful embryogenesis must first be considered and acknowledged. Capacity for DNA repair in the oocyte is important, but is finite and decreases with age. Multiple DNA decays related to oxidation, abasic sites, base modifications, mismatches and strand breaks can be repaired within the oocyte, but it is poorly equipped to deal with nucleus decondensation and tertiary structure anomalies (1). For this reason, defects in the decondensation of the sperm nucleus can have serious consequences during embryogenesis.

Lifestyle habits such as drug abuse, alcohol, anabolic steroid use and obesity are well known inducers of SDF. Some professional activities in a chemically polluted environment can also have a negative impact on sperm DNA. Paternal age >40 influences SDF (2), probably related to a decreased capacity for combating oxidative stress. An increased risk of recurrent miscarriage is one of the consequences of increased levels of SDF (3). The relationship between semen analysis and DNA fragmentation has been covered extensively in published literature. Oligospermia per se may not be an indication for DNA fragmentation testing, but decreased vitality is: there is a significant inverse link between SDF and vitality (P<0.0001) (4). Patients with sperm vitality lower than 50% should be tested for SDF—vitality <50% correlates with 95% probability of SDF >30%.

Decondensation is a reflection of faulty compaction, i.e., abnormal tertiary structure, and is generally associated with immaturity. Estimation of sperm decondensation is a parameter that has thus far been neglected. Repeated in vitro fertilization (IVF) failures with developmental arrest at the pronuclear stage or very soon after are linked to anomalies of nuclear decondensation (5). Varicocele induces tertiary structure anomalies in sperm nuclei (6); we confirm these results in our practice. In a study that included 482 infertile patients, we observed a negative correlation between SDI and sperm concentration (r= −0.12, P=0.01) for polyzoospermic patients (7). There is also a marginal correlation between SDI and percentage of sperm with abnormal morphology. SDF and nucleus decondensation are independent processes.

We have recently observed that patients carrying homozygous MethylTetraHydroFolate Reductase (MTHFR) isoforms present with significant anomalies in sperm DNA structure, especially SDI (Ménézo et al. unpublished). It has now been established that 30–40% of the overall population are carriers of C677T and/or A1298C isoforms, both of which impair methylation processes. Patients carrying these isoforms have an increased risk of infertility (8).

Our experience has led to several conclusions regarding the reproducibility and reliability of the methods of assessment described below:

Reliable results are dependent upon technical aspects of the procedures. Each sample must be analyzed separately and individually, stained and processed immediately after liquefaction. If the samples have been frozen after liquefaction, each individual sample must be stained immediately post-thaw, without storing on ice. If this is ignored, staining alters according to the time post-thaw in a non-reproducible manner. Similar observations have been made for TUNEL: sources of potential pitfalls are important (9).

Quantification of 8-hydroxy deoxyguanine (8-OH dG) is useful in evaluating oxidative stress; although all of the nuclear bases are vulnerable to oxidation, guanine is the base that is most sensitive. Several publications have demonstrated the link between 8-OH dG formation (product of guanine oxidation) and fragmentation (10,11). High levels of guanine oxidation generate abasic sites, as well as other decays in DNA. Base oxidation is a step that lies immediately upstream to DNA fragmentation, which is then followed by necrospermia (12).

The Halo Test is easy and readily accessible. An elevated halo test result indicates a high level of structural DNA decays. However, it combines both SDF and SDI, so that the results obtained are difficult to interpret in relation to subsequent therapeutic strategies.

Distribution of DFI and SDI

Acridine orange/flow cytometry is routinely used in our practice, using a protocol as previously described (14). In order to monitor the reliability of the method, samples are randomly re-tested every week (internal standards). Ten samples are assayed with our methods every 3 months, and results are compared with TUNEL and aniline blue assays (external standard).

SDF and evaluation of sperm nucleus decondensation (SDI) are recommended for patients with repeated ART failures and those with confirmed difficulty in conceiving. Based on 1,417 patients followed for a period of 1 year, three thresholds can be described:

Red zone: SDF >25%=439/1,417=31%; parameters indicate a true problem, and patients require further assessment, including evaluation of possible environmental and nutritional hazards, as well as genetic testing for MTHFR. Treatment with nutritional supplements should be strongly suggested.

In general, we suggest a nutritional supplement containing antioxidant preparations for patients in the grey and red zones. The age of the two partners usually reinforces this decision.

A lack of scientific approach regarding these treatments is evident. It appears that compounds such as Selenium (Se) are prescribed without rationale, as Se deficiency has not been identified in male patients (15,16); CoQ10 as ubiquinone passes through the intestinal barrier only when taken as ubiquinol. Currently available mixtures are generally inefficient, if not harmful (13). As there is a significant link between anomalies in DNA methylation and oxidative stress (17,18) we prefer to use supplements that support the one carbon cycle, which is involved both in methylation and in the synthesis of three major antioxidants: hypotaurine, glutathione and CoQ10 (Figure 1). The use of these supplements has yielded interesting results, even in patients with multiple ART failures (5-19). 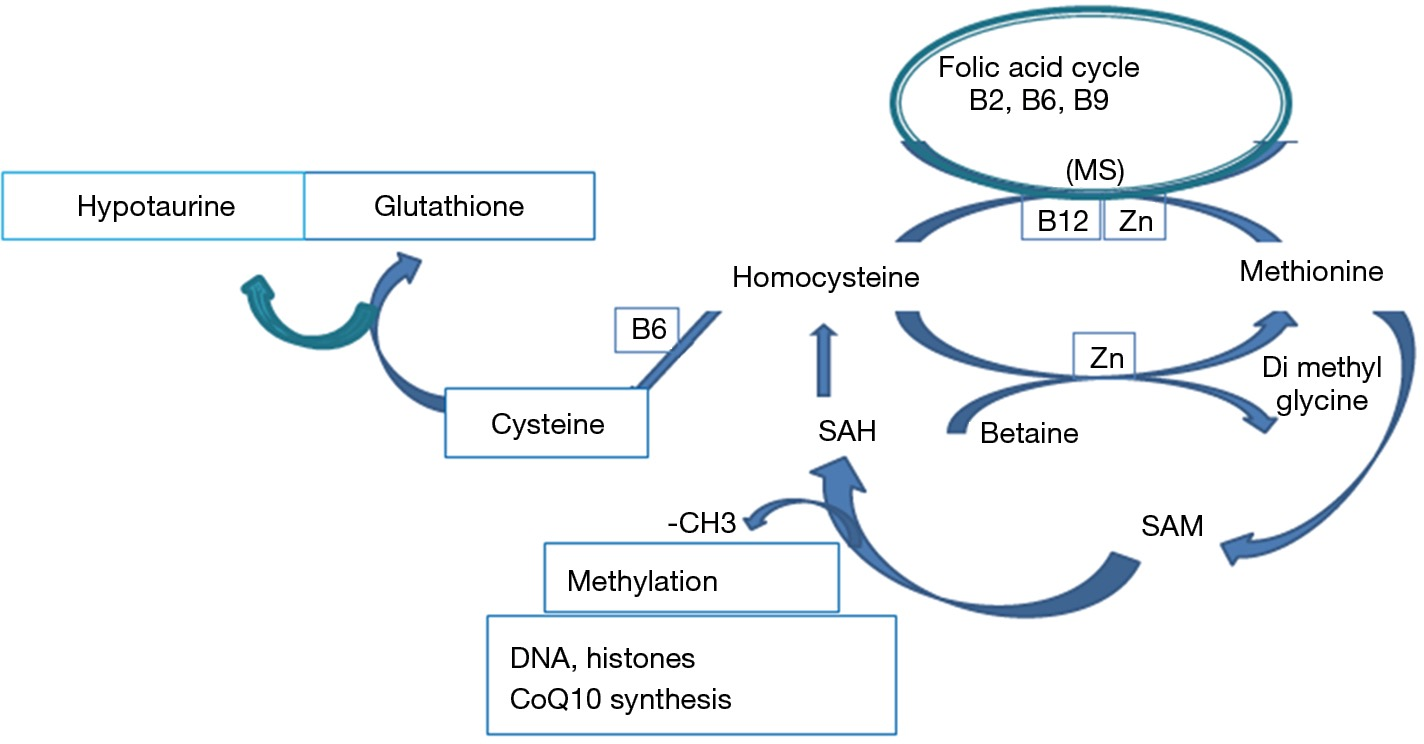 We fully agree with Agarwal and colleagues regarding the clinical utility of SDF testing. The study of sperm DNA structure is important and necessary in evaluating causes of infertility; however, with some exceptions, we suggest that it should not be performed as an initial screen. We regret that SDI is neglected, especially as the oocyte is not well equipped to repair this process if it is faulty. Sperm DNA structural analysis is mandatory in ART technology after one or two failures; based on the age-related capacity of the oocyte to repair DNA damage, the age of the female partner is also an important consideration. If female age is >35, poor DNA repair capacity can be anticipated; after assessing the level of DNA damage, a therapeutic approach with nutritional supplements may or may not be proposed. DNA structural analysis should in any case be carried out before oocyte donation, and after recurrent miscarriage. In our opinion, this is a parameter that has been neglected, and is often involved in early developmental arrests, and even in late miscarriages. Paternal age is an indication for analysis of SDF and SDI, especially as these are linked to paternal age and to the risk of psychic disorders in children (20). This bypasses the link between oxidative stress/DNA fragmentation, methylation disorders and the resulting epigenetic failures transmitted trans-generationally. The current increase in levels of environmental endocrine disruptors (EDCs) reinforces this therapeutic strategy, as EDCs are well-known inducers of oxidative stress.

We would like to thank Dr. Kay Elder, Bourn hall Clinic, Cambridge UK, for her help in the redaction of the paper.