Four large randomised controlled trials testing modest hypofractionation for localised prostate cancer have reported efficacy and side effect outcomes within the last year (1-8). The studies were designed using different strategies which need to be considered when interpreting their results. The two largest trials, CHHiP (3,216 patients) (1-3) and PROFIT (1,206 patients) (4), have much in common. Both studies compared standard fractionation radiation therapy (SFRT) schedules using 2.0 Gy daily fractions (total doses CHHiP 74 Gy; PROFIT 78 Gy) with hypofractionated radiotherapy (HFRT) schedules using 3.0 Gy daily fractions (total doses CHHiP 60 and 57 Gy; PROFIT 60 Gy). Both trials tested the hypothesis that modest hypofractionation is non-inferior to standard fractionation in terms of disease control. Intensity modulated radiotherapy methods (IMRT) using either forward or inverse planning with a three part simultaneous integrated boost were used in all patients in the CHHiP trial. Thirty percent of patients had image-guided radiotherapy (IGRT) (Table 1). IMRT/IGRT methods were used in the PROFIT trial. A key difference between the trials was the use of 6 months neoadjuvant androgen deprivation therapy (ADT) in 97% of patients in CHHiP. In contrast, only about 5% patients in the PROFIT trial received ADT. The CHHiP trial showed that efficacy defined by biochemical/clinical failure free outcome was non-inferior for the 60 Gy group compared with the 74 Gy group using a critical hazard ratio of 1.208. Non-inferiority could not be claimed for the 57 Gy group. At 5-year, the failure free proportion was higher in the 60 Gy group at 90.6% (95% CI, 88.5–92.3%) compared with the 74 Gy group 88.3% (95% CI, 86.0–90.2%) and 57 Gy group (95% CI, 83.4–88.0). There was no heterogeneity of fractionation effect seen in patients with low (15% of trial population), intermediate (73% of trial population) or high risk (12% of trial population) disease. We estimate that the 60 Gy in 3 Gy fraction group had an approximate equivalence to 76 Gy in 2 Gy fractions. The PROFIT trial included patients with intermediate risk disease and showed that the 60Gy group was non-inferior to the 78 Gy group with identical 21% biochemical/clinical failure at 5 years. The 11% higher biochemical control rate than in CHHiP is probably due to the use of ADT and similar findings have been reported in EORTC Trial 22991 which showed a 13% gain in 5 years PSA control with 6 months of ADT (10). Regarding side effects the two trials also gave complimentary results. In the CHHiP trial acute RTOG bowel (GI) and bladder (GU) symptoms peaked sooner with HFRT schedules (4–5 weeks) than conformal radiotherapy (CFRT) (7–8 weeks) and there was a higher proportion of grade 2+ peak GI toxicity in both hypofractionated groups compared with CFRT but by 18 weeks both GI and GU toxicity was similar for CFRT/HFRT (Table 1). There were no differences in long-term side-effects between CFRT and HFRT groups at 5 years. Patient reported outcomes (PRO) suggest an overall low incidence of GI and GU symptoms in all treatment groups; GI side effects were about 50% lower than in the previous MRC RT01 trial (1,3,11). Similarly in the PROFIT trial there was a short lasting increase in acute GI side effects but conversely late GI side effects were increased in the 78 Gy SFRT group compared with HFRT group (Table 1). 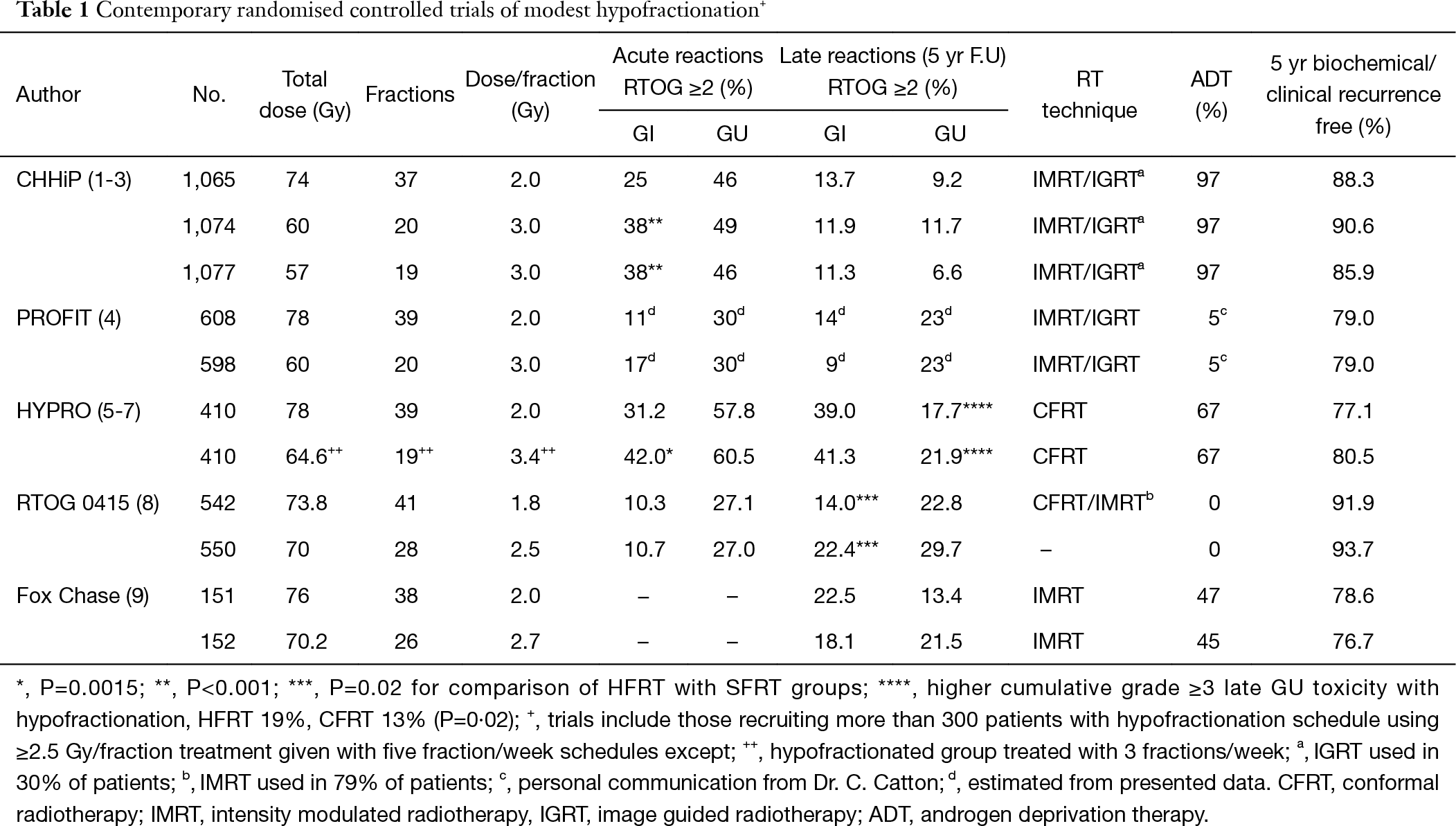 These two trials have produced reassuringly similar results in patients with mainly intermediate risk disease and the impact of hypofractionation is similar with or without ADT. The finding of increased side effects with 78 Gy in PROFIT is in keeping with the isotoxicity of 74 Gy in CHHiP. Both investigator groups suggested that HFRT (60 Gy/20f in 4 weeks) could be considered a new standard of care (12).

As pointed out by Carrie and Tanguy (13), authors of the HYPRO study (5-7) came to a different conclusion using their hypofractionated schedule. There are, however, important differences in trial design and treatment implementation which may account for this. HYPRO tested the hypothesis that dose escalated hypofractionated treatment can be given to improve disease control rates without increasing side effects. Eight hundred and four patients with intermediate-risk and high-risk disease were randomly assigned to receive either CFRT 78 Gy in 2 Gy daily fractions or 64 Gy in 3.4 Gy fractions but importantly treating with three fractions per week. The gain in tumour control was smaller than might have been expected (5-year control: HFRT 80.5% vs. CFRT 77.1%) and not statistically significant (5). This could be the play of chance but a biological explanation may be the relative treatment protraction in the hypofractionation group which gives additional credence for the existence of a time factor in prostate cancer radiation response (14). The relatively unfavourable side effect profiles (6,7) (Table 1) may be due to the higher biological doses given in the hypofractionation group as well as the higher doses delivered to the seminal vesicles compared with, for example, the CHHiP trial. Overall the trial failed to demonstrate either superior efficacy or non-inferior side effects.

RTOG trial 0415 (8) was designed to test the non-inferiority of HFRT in low risk prostate cancer. A total of 1,092 men were included comparing daily schedules of 73.8 Gy using 1.8 Gy fractions with 70 Gy using 2.5 Gy fractions. The cumulative incidence of biochemical recurrence at 5 years was 8% and 6% in CFRT and HFRT groups respectively which met the protocol-specified non-inferiority criterion. Acute GI/GU side effects were similar in the randomised groups. Late grade ≥2 GI/GU adverse events (Table 1) were increased with hypofractionation. The authors concluded that this HFRT schedule was non-inferior to CFRT, although with an increased risk of late toxicity. The increase in side effects is perhaps expected as the 2.0 Gy equivalent doses are approximately 70 Gy/76 Gy for the CFRT/HFRT groups respectively.

We believe that results from the CHHiP and PROFIT trials provide compelling evidence that effective and safe treatment can be given using a 60 Gy in 20f over 4 weeks schedule which should become a new standard of care. A key proviso is that high quality IMRT is delivered meeting trial defined normal tissue dose constraints.

We acknowledge NHS funding to the NIHR Biomedical Research Centre at the Royal Marsden NHS Foundation Trust and The Institute of Cancer Research.