Laparoendoscopic single-site (LESS) surgery was first described for salpingectomy by Wheeless in 1969 (7). After that, more and more surgeries were performed with LESS (8-10). It has several advantages compared with CL-N including simplicity, expediency, lower cost, avoidance of potential complications associated with CL-N, improved cosmetic results, and flexibility to be converted when indicated (8). In 2007, Rane et al. reported the first case of single-port laparoscopic nephrectomy at the 25th World Congress of Endourology (11). Since 2007, much research has focused on the perioperative and oncologic outcomes of LESS radical nephrectomy (LESS-RN) and found that it is safe and has excellent cosmetic results (12,13). A recent meta-analysis compared CL-N and LESS-RN and found that patients who underwent LESS-RN have a longer operation time but a shorter length of hospital stay (LOS) and suffered less pain (14). However, the research was limited due to its small sample size and short follow-up period. In this study, we report the oncologic and functional outcomes of LESS-RN with a follow-up of 10 years to provide long-term evidence and further evaluate the effect of LESS-RN. We present the following article in accordance with the STROBE reporting checklist (available at https://tau.amegroups.com/article/view/10.21037/tau-22-863/rc).

Patients with localized RCC (cT1–T2N0M0) who received LESS-RN at Changhai Hospital between 2009 and 2012 were enrolled in the study. To be eligible for inclusion in this study, the patients had to meet the following inclusion criteria: (I) have a stage T1–T2 tumor for which RN was indicated; (II) have a lower body mass index (BMI) ≤30 kg/m2; and (III) have T1a tumors that were not suitable for partial nephrectomy (e.g., tumors localized in the hilum with significant involvement of the pelvicalyceal system), or the patient elected to undergo the radical procedure. Patients who were lost to follow-up were excluded from the study. The final decision to proceed with the LESS-RN was made after the patients were advised of all their surgical options. The study was conducted in accordance with the Declaration of Helsinki (as revised in 2013). The study was approved by Changhai Hospital Ethics Committee (No. 2021-140) and informed consent was taken from all the patients. All the patients provided their written informed consent to undergo the LESS-RN and an auxiliary incision or, if necessary, intraoperative open surgery. We described the details of the surgical procedure in an earlier publication (15).

Independent investigators performed the 10-year follow-up visits. It has been recommended that 5 years after surgery, patients undergo abdominal computed tomography (CT) or magnetic resonance imaging (MRI) every 2 years (2). Details of the first 5 years of follow-up were reported in our previously published article (18). Patients who had stopped follow-up at our institution were contacted by telephone to enquire about their latest imaging results and serum creatinine (SCr) levels. Some patients were only able to report that their SCr values were slightly higher than normal and could not provide the exact values. Reports of slightly elevated SCr levels did not concern the examining physician and were considered normal. The chronic kidney disease (CKD) stage of each patient was defined according to the National Kidney Foundation Kidney Disease Outcome Quality Initiative classification (19). The estimated glomerular filtration rate (eGFR)was calculated using the Chronic Kidney Disease Epidemiology Collaboration equation (CKD-EPI) (20).

All the statistical analyses were performed using SPSS (IBM Corp., Somers, NY, USA). A survival curve was generated using R 4.2.0 (http://cran.r-project.org). For all the statistical analyses, a two-sided P value <0.05 was considered statistically significant. The categorical variables are presented as the frequency and percentage, and the continuous variables are presented as the median and interquartile range (IQR). The Kaplan-Meier (KM) method was used to calculate the overall survival (OS) and cancer-specific survival (CSS) rates. Missing values are listed in Table 1, and patients with missing values were excluded from the KM analysis. 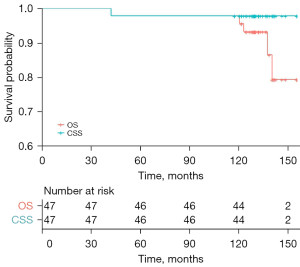 As for the other 42 patients, 40 had normal or higher SCr levels, but no interventions were required; 1 patient with SCr levels of 160–170 reported feeling weak sometimes; another patient had SCr levels of 180–190 but had no symptoms. The 2 patients had not received any intervention measures and were advised to consult a nearby hospital. Therefore, a total of 5 patients (10.4%, 3 uremia and 2 with elevated SCr) had CKD stage ≥3. Recurrence and metastasis of the tumor only occurred in a patient with stage T1b 22 months after the surgery, who died because of the local recurrence and pulmonary metastasis 20 months later.

It has been >10 years since LESS was first reported. Fewer incisions not only improve cosmesis but also cause less tissue injury and blood loss. Major surgical trauma will affect tumor outcomes through the abnormal immune system (21,22). Debate continues as to whether it is worthwhile to perform a more difficult surgery to derive some potential benefits. However, the long-term data on tumor outcomes in LESS-RN patients are limited. We reported the oncological and functional outcomes of 48 patients with pathologically confirmed renal cancer who underwent LESS-RN surgery, each of whom was followed-up for at least 10 years. To our knowledge, this is the first series with a 10-year follow-up period for LESS-RN to date. Previously, a single-institutional study with a 5-year follow-up period was published in 2013 (12). In the 5-year study, 24 LESS-RN and 48 CL-RN patients with malignant tumors were included. The mean follow-up times of the LESS-RN and CL-RN patients were 21 and 38 months, respectively. There was no difference between the patients in terms of OS (91.7% vs. 95.8%; P=0.123) and CSS (95.8% vs. 87.5%; P=0.384). We had better outcomes for OS (100%) compared to that reported in our previous publication (18). The new deaths occurred in the last 2 years. Among the patients who died, 3 (50%) had uremia before their deaths, which suggested that poor physical condition caused by reduced kidney function was the main cause of death after LESS-RN. Only 1 patient with stage T1b experienced tumor recurrence and metastasis. That patient developed local recurrence and pulmonary metastasis 22 months after surgery and died some 20 months later. Recurrence and metastasis has not been reported in many other studies (1,23-25). Taking these data together, we concluded that LESS-RN performs well in long-term cancer control for localized renal cancer at the tertiary care level.

The latest eGFR was not available, as most of the patients could not provide their precise SCr levels during the follow-up. However, the patients reported that their SCr levels were normal or slightly high, and based on these reports, the doctor was not overly concerned. Thus, the SCr levels appeared to be largely normal in the patients included in this study.

These results represent an improvement compared to those reported in our previous publication (18). In the previous study, the CKD stage in 38 cases (74.5%) were upstaging, and 22 of these 38 patients (57.9%) increased from a low stage (CKD stage 1 or 2) to a high stage (CKD ≥3) 3–5 years after the surgery. However, in the 10-year follow-up study, only 5 (10.4%) patients had high stage CKD, of whom 3 had uremia and 2 had increased SCr levels for which they had received no treatment at the time of the last follow-up. Lau et al. performed a matched study of patients who underwent partial and radical resections and were followed-up for 10 years. The cumulative incidence rates of CKD were 11.6% and 22.4%, respectively (26). Our results were slightly better than those of other studies in which radical nephrectomies have been performed. The recovery of renal function means that the normal contralateral kidney must provide continuous functional compensation in the intermediate period after surgery, but such compensation will disappear gradually as time goes by. Thus, careful attention should be paid to renal function during the early and middle follow-up periods.

There are still some problems in LESS, such as the disappearance of the operating triangle of the main instruments, and the mutual interference between the speculum and other surgical instruments. These limitations have hindered the promotion of LESS. These problems can be solved by the improvement of surgical instruments. In 2009, Kaouk et al. reported 2 cases of single-port robotic partial nephrectomy (27). The emergence of the latest generation of Da Vinci platform, Da Vinci SP (Intuitive Surgical Corporation, Sunnyvale, CA, USA), better solves the problem of mutual interference between instruments. In 2014, Kaouk et al. reported four cases of partial nephrectomy and two cases of radical nephrectomy using Da Vinci SP with good postoperative renal function and no recurrence (28). Therefore, driven by science and technology, LESS has a good development prospect.

This study had some limitations. First, as a retrospective study with a small sample size, selection bias was unavoidable. Second, in most cases, we did not have exact values for the follow-up SCr levels; thus, the true prevalence of CKD may have been underestimated.

For localized renal cancer, LESS-RN is safe and effective with excellent long-term oncology controllability and has good functional outcomes. Prospective studies with large sample sizes need to be conducted to validate our results.

Reporting Checklist: The authors have completed the STROBE reporting checklist. Available at https://tau.amegroups.com/article/view/10.21037/tau-22-863/rc

Conflicts of Interest: All authors have completed the ICMJE uniform disclosure form (available at https://tau.amegroups.com/article/view/10.21037/tau-22-863/coif). The authors have no conflicts of interest to declare.

Ethical Statement: The authors are accountable for all aspects of the work in ensuring that questions related to the accuracy or integrity of any part of the work are appropriately investigated and resolved. The study was conducted in accordance with the Declaration of Helsinki (as revised in 2013). The study was approved by Shanghai Changhai Hospital Ethics Committee (No. 2021-140), and informed consent was taken from all the patients.