Classification and definition of premature ejaculation

Premature ejaculation (PE) is a poorly understood condition that effects up to 30% of the male population and is considered as the most common sexual disorder in men (1). The ambiguity surrounding PE is in part due to the difficulty in conducting and interpreting research in the absence of a standardised universal definition that adequately encompasses the characteristics of these patients (2). Perceptions regarding what truly is a “normal ejaculation time”, as well as variability of socioeconomic and cultural characteristics among men with the complaint of PE have hampered efforts to establish a universal definition and classification of the disease of PE (3).

An enhanced awareness of sexual dysfunction in the recent decades has lead to an increase in scientific research that has challenged the traditional paradigm regarding PE and has supported a possible physiological basis (4). Having previously been considered singly as a psychologically disorder, PE is now understood to be far more complex with multiple etiological factors playing a role in its pathogenesis (5). These advances in understanding PE necessitated the development of an evidence-based definition and classification to enable the scientific community to design methodologically rigorous studies on the topic.

Since the first report of PE in the medical literature in 1887 (6), several definitions have been proposed, the most recent of which are summarized in Table 1. 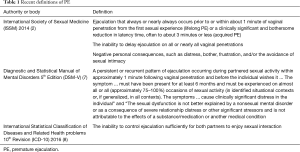 The first recognisable definition of PE was proposed by Masters and Johnson in 1970, who defined the condition as “The inability of a man to delay ejaculation long enough for his partner to reach orgasm on 50% of intercourse attempts” (9). This definition, although a step in the right direction of raising awareness of the condition, suffered from an important limitation. It encompassed the role of the female partners and therefore could be confounded by the women’s ability to climax. Following this, professional bodies and individuals have proposed a number of definitions. Many of these were based on specialists’ opinions rather than evidence, lacked operational criteria and specificity, and had shortcomings in their interpretation by clinicians (10).

In 1980, the American Psychiatric Association (APA) released the Diagnostic and Statistical Manual of Mental Disorders 3rd edition (DSM-3), which was based on the recommendations of opinion leaders of the time (11). The use of ambiguous terminology (e.g., reasonable voluntary control) made the definition open to inter-observer variability and rendered it effectively unusable as a research tool. The subsequent iteration, DSM-IV, aimed to address this deficiency by including a time component with the phrase “short ejaculation time”, but removed control as an important element (12). Therefore, the DSM-IV definition was not specific enough to recommend an actual cut-off time to operationalize the ‘short ejaculation time’.

The International Statistical Classification of Disease 10th edition (ISCD-10) was released in 1994, and was the first definition to propose a time limit as part of the definition (13). This proposed that ejaculation 15 seconds or less after penetration constituted PE, although the evidence that supported this cut-off is unclear (14,15). Subsequent definitions have sought to include a suggested time limit to help standardise their application.

Early definitions of PE were criticized for being vague, open to multiple interpretations and for lacking operational criteria (10). Mounting pressure from regulators including the United States Food and Drug Administration (FDA), and general dissatisfaction with the heterogeneity of the definitions prompted a re-examination. In 2007 (10) and then 2013 (2), the International Society for Sexual Medicine (ISSM) convened a committee of internationally recognised experts to create a definition, which addressed the criticisms levied against previous attempts. They acknowledged that, although ‘lifelong’ and ‘acquired’ PE were different entities, they shared the same common constructs as identified above and therefore by using these, a unifying definition could be worked up. Out of this they identified three domains which appeared to underpin the majority of definitions: (I) short ejaculatory latency; (II) a perceived lack of control; (III) negative personal consequences including distress, frustration, avoidance of intercourse and interpersonal issues (10). 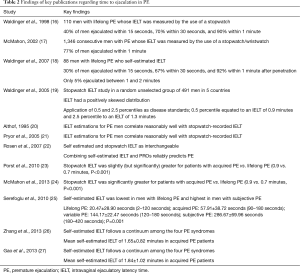 Data by Waldinger et al. and later McMahon suggested that lifelong PE was characterised by an IELT of around 1 minute or less (16,17). Waldinger et al. examined 110 men with lifelong PE and demonstrated that 90% of them had IIELTs less than 1 minute. Only 10% of these men ejaculated between 1–2 minutes (16). McMahon found similarly that 77% of men with PE ejaculated within 1 minute (17).

A further paper by the Waldinger in 2005 examined the stopwatch IELT of a group of randomly unselected men across 5 counties, and after examining the 0.5 and 2.5 percentiles corresponded to an IELT of 0.9 and 1.3 minutes respectively (19). Consequently an IELT of 1 minute should capture 80–90% of patients with PE.

The inability to delay or control ejaculation is postulated to be an important factor in PE in a number of studies (see Table 3). 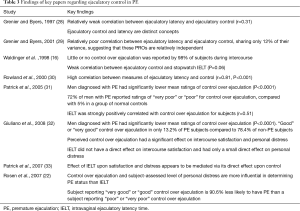 PE clearly has an effect on the psyche of its sufferer, as well as their partners. A number of studies have examined the relationship of PE to negative personal consequences of which the key papers are listed in Table 4 with their findings. In one community-based study examining 1,587 subjects of which 207 were diagnosed using the DSM-IV-TR criteria for PE, 64% in the PE group vs. 4% in non-PE group (P≤0.0001) rated “quite a bit” or “extremely” for personal distress and 31% vs. 1% (P<0.0001) respectively for interpersonal difficulty (31). The negative effect of PE on patients’ wellbeing has been corroborated by data from McCabe and Rowland as well as others (34,37). 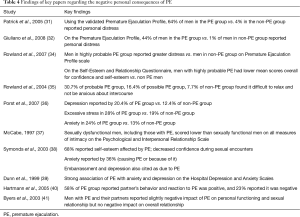 The first attempt to classify PE was by Schapiro in 1943 who identified two groups of patients with PE: (I) type A—“hypotonic”, associated with erectile dysfunction and; (II) type B—“sexually hypertonic”, with a tendency to ejaculate rapidly from the first act of intercourse (42). These two groups were later relabelled as ‘primary or lifelong’ and ‘secondary or acquired’ (43).

The terms ‘psychogenic PE’ and ‘biogenic PE’ with further sub-characterisation have also been used, but have failed to gain traction in scientific publications (44,45).

Waldinger and Schweitzer identified a disparity in the prevalence of objectively measured PE i.e., IELTs of <1 minute in the general population (~2.5%) and the subjective self reporting of men with PE with IELT greater than 1 minute in other studies being much higher (19,31,32,46). As a consequence of this, they attempted to rationalise this difference by adding two new subtypes on top of the pre-existing lifelong and acquired PE: variable PE and subjective PE (14,47). Each of these subtypes appears to have a different aetiology and prevalence rates as shown in Table 5. 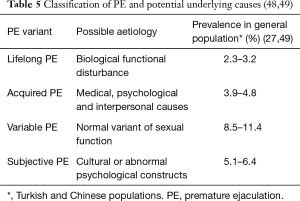 PE is a complex condition, which still remains incompletely characterised despite advances in our understanding over the last decade. As a consequence, the ability to define and classify the condition has been difficult. A move to a more evidence based approach as applied by the ISSM has improved the clinicians’ ability to define those who need treatment, as well as perform further research in this complex condition.