The epidemiology of premature ejaculation

Vast advances have occurred over the past decade with regards to understanding the epidemiology, pathophysiology and management of premature ejaculation (PE) (1); however, we still have much to learn about this common sexual problem. As a standardized evidence-based definition of PE has only recently been established (2), the reported prevalence rates of PE prior to this definition have been difficult to interoperate. As a result, a large range of conflicting prevalence rates have been reported (Table 1). In addition to the lack of a standardized definition and operational criteria, the method of recruitment for study participation and method of data collection have obviously contributed to the broad range of reported prevalence rates. Controversy regarding the specific criteria comprising the disease of PE has not only hindered the ability to determine true prevalence rates, but also to conduct evidence-based research on the treatment of the disease. Understanding the clinical significance of a reported sexual dysfunctions also remains a challenge (41).

In an attempt to remedy the disparity among reported prevalence rates, the International Society for Sexual Medicine (ISSM) developed an evidence-based definition and established set operational criteria (2). The American Psychiatric Association also recently revised their definition of PE, including a 1-minute cut off latency and the criterion of “ejaculation before desired” and “significant clinical distress” (42). Both of these definitions include three main parameters: ejaculatory latency time, distress and ejaculating before desired. A recent interesting statistical analysis took all three of these operational criteria into account and found that modifying each individual operational criterion could significantly alter the prevalence rates of PE (43). Thus, adherence to these criteria aims to allow for a better understanding of the prevalence of PE, according to each specific definition.

Some of the first to recognize the need for a specific definition of PE were Waldinger and Schweitzer, who hypothesized that the true prevalence of patients actually seeking treatment for PE was much less than previously reported prevalence rates (44,45). They proposed a new classification system of PE (46). Based on their classification system, two separate observational, cross-sectional surveys from two different continents found that the overall prevalence of the complaint of PE to be 19.8% and 25.80% (22,32) (Table 2). Further stratifying these complaints into the classifications defined, the complaint of lifelong PE was seen at rates of 2.3% and 3.2%, while the rates of acquired PE were 3.9% and 4.5%, variable PE were 8.5% and 11.4% and subjective PE were 5.1% and 6.4% (22,32). Interestingly both of these studies found that men with acquired PE were more likely to seek treatment when compared to men with lifelong PE. Treatment seeking behavior may contribute to errors in the previously reported rates of PE, as it is possible that men with lifelong PE come to terms with their problem and not seek treatment. The additional psychological burden of a new change in ejaculatory latency in acquired PE, on the other hand, may prompt more frequent treatment seeking behaviors (47). Thus, it is likely that a disparity exists between the incidence of various PE sub-types in the general community and in men actively seeking treatment for PE (48,49). This disparity could be a further barrier to understanding the true incidence of each sub-type of PE. 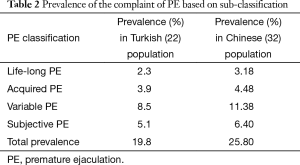 Several recent studies applying up-to-date definitions and operational criteria have examined the prevalence of PE in men with other associated urologic complaints. Zhang et al. (50) completed an investigation regarding the association of the International Prostate Symptom Score (IPSS) to the four various PE syndromes, and found that men complaining of ejaculating prematurely also reported worse IPSS than men without PE complaints. Another cross-sectional study was conducted to determine the prevalence of PE among adult male participants with lower urinary tract symptoms (LUTS) and found that among the participants consulted with LUTS, 27% also had concomitant PE (51). Recently, Li and Kang (52) performed a meta-analysis of sexual dysfunctions that included a total of 11,189 men diagnosed with chronic prostatitis and chronic pelvic pain syndrome, and found the prevalence of PE to be 40% in these men. The results from these studies are promising with regards to developing an understanding of the true prevalence of PE according to the newly adapted definitions.

The new criteria and classification of PE will allow for continued research into the diverse phenomenology, etiology and pathogenesis of the disease to be conducted (53). Although the pathogenesis of lifelong and acquired PE differs, the presence of shared dimensions, such as a lack of ejaculatory control and the presence of negative personal consequences, suggest a potential for a single unifying definition of both lifelong and acquired PE (54). While the absolute pathophysiology and true prevalence of PE remains unclear, developing a better understanding of the true prevalence of the disease will allow for the completion of more accurate analysis and treatment of the disease.