The impact of catheter removal time on urinary continence and overactive bladder symptoms after robot-assisted radical prostatectomy: a retrospective analysis of consecutive 432 cases from a single institution

For patients with localized prostate cancer, robot-assisted radical prostatectomy (RARP) is a reliable treatment option. After radical prostatectomy, the catheter was indwelling for 7 to 14 days to ensure the vesicourethral anastomosis healing, while several studies have reported that removing the catheter within 7 days is also safe and feasible (1-3). There are conflicting data as to whether the length of catheterization time has an impact on urinary continence recovery (4-7). Prolonged catheterization increases the risk of urinary tract infection and may cause patient discomfort (2,8,9), and it has been reported that prolonged catheterization can adversely affect short- and intermediate-term continence recovery (4). However, Patel et al. have reported that early removal of the urinary catheter 3 or 4 days after surgery was associated with a significant increase in the incidence of acute urinary retention (10). Therefore, the optimal length of postoperative catheterization remains to be determined.

Post-prostatectomy overactive bladder (OAB) symptoms are common, which may negatively affect continence recovery (11). However, whether early removal of the urinary catheter will result in more pronounced bladder irritation symptoms due to functional changes of the bladder is still unknown.

The present retrospective study was designed to determine whether different catheterization time has an impact on continence recovery. Overactive bladder symptom score (OABSS) was assessed to evaluate the degree of bladder irritation after catheter removal. We present the following article in accordance with the STROBE reporting checklist (available at https://tau.amegroups.com/article/view/10.21037/tau-22-397/rc).

From Nov 2020 to Oct 2021, 474 patients with localized prostate cancer underwent RARP by the same experienced surgeon at the Department of Urology, Peking University First Hospital. Patients who met the enrollment criteria were included. The inclusion criteria were localized prostate cancer (cT1-3, cN0, cM0). Exclusion criteria were as follows: (I) other type of urinary diversion was performed (n=1); (II) incontinence prior to RARP (n=1); (III) patients who were lost to follow-up or died within 6 months after surgery (n=40). The study was conducted in accordance with the Declaration of Helsinki (as revised in 2013). The study was approved by the clinical research ethics committee of Peking University First Hospital (protocol number: 2020[278]), and individual consent for this retrospective analysis was waived.

All RARP cases were performed using the transabdominal approach. Total periurethral reconstruction was routinely performed in all cases to improve early continence. The vesicourethral anastomosis is performed by using a 3-0 self-locking running suture. For low-risk patients, a neurovascular bundle (NVB) sparing procedure is performed. Bilateral pelvic lymph node dissection was routinely performed in high-risk patients. The pelvic drains were removed when the drainage was less than 200 mL during a 24-hour period.

After surgery, all patients were instructed to undergo proper pelvic floor rehabilitation. When patients were scheduled for urinary catheter removal, they were evaluated by a specialized nurse. Cystography was routinely performed to confirm that there was no anastomotic leak. If the cystogram showed evidence of extravasation, the catheter would be retained for at least 14 days. And in some patients requiring extensive bladder neck reconstruction, or with great tension in the urethral anastomosis, the catheter was also recommended to retain for more than 14 days. One patient had previous pelvis radiation history, which might lead to severe scarring around the urethra, and he had an unhealthy appearance of the surrounding tissue during the operation. He had kept the catheter for 3 weeks. If none of the above occurred, we would inform the patient that the catheter can be removed on 7/10/14 days after surgery, and the patient would make an appointment for catheter removal through the online outpatient appointment system. Patients could choose the appointment time at their own willingness.

Self-administered questionnaires were used at different times (48 hours, 1 week, 4, 12, and 24 weeks) after catheter removal, including the number of pads used per 24 hours and OABSS. The patients were also instructed to perform the 24-hour pad weight test to accurately record the severity of incontinence. Continence was defined as no more than 1 pad used or no more than 20 g of urine leakage per 24 hours. 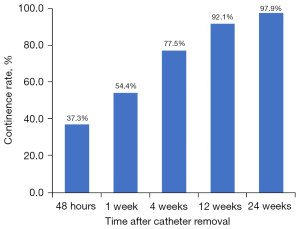 Number of safety pads and 24-h pad weight per day 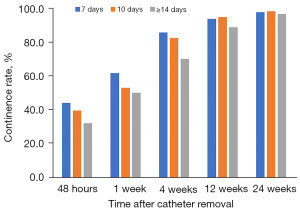 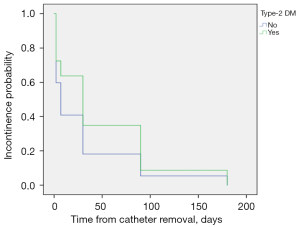 The results showed that the mean OABSS of patients in the continent group were significantly lower than the incontinent group at 48 hours, 4, 12 and 24 weeks after catheter removal (Table 7). At 24 weeks after catheter removal, the mean OABSS in the 7 days group was significantly lower than in other groups. The results are shown in Table 8.

Mean OABSS at different times after catheter removal according continency

Robotic surgery has greatly reduced the technical difficulty of radical prostatectomy (16). With the advancement of robotic surgery and the use of total anatomical reconstruction, the quality of vesicourethral anastomosis has gained significant improvement, resulting in better recovery of early urinary continence (17). In the era of open surgery, urologists prefer to keep the catheter for a more prolonged period. With the advancement of robotic technique, earlier removal of the catheter is tried in order to improve continence recovery and the quality of life.

Our present study was designed to compare the impact of catheter removal on urinary continence outcomes and OAB symptoms. Favorable continence results were reported for patients undergoing RARP with overall 3- and 6-month continence rates of 92.1% and 97.9%. The results showed that removal of the catheter at different times had no significant effect on the patients’ early continence (48 hours, 1 week), and long-term continence (24 weeks). But early catheter removal (7 days) was associated with better mid-term continence (4 weeks). Therefore, early removal of the catheter can be attempted to reduce complications associated with prolonged catheterization, provided that there is no urine extravasation.

The question of whether early removal of the catheter exacerbates bladder irritation symptoms in patients was also explored in this study. We measured OABSS at different times after catheter removal. The results showed that the mean OABSS of patients in the continent group was significantly lower than the incontinent group at 48 hours, 4, 12 and 24 weeks after catheter removal, which implies that OAB symptoms adversely impact continence recovery. This result suggests that, in addition to anatomical factors, functional changes in the bladder may also be related to the occurrence of postoperative incontinence and merits further exploration. In the present study, the results showed that at 24 weeks after catheter removal, the mean OABSS in the 7 days group was significantly lower than in other groups, suggesting that early removal of the catheter might lead to less pronounced OAB symptoms. To the best of our knowledge, our retrospective study is the first to identify a relationship between the catheterization time and OAB symptoms.

In the present study, the presence of diabetes significantly affected continence recovery. Diabetes seems to be a significant disadvantage in gaining urinary continence compared with nondiabetic patients. Our results collaborate with those described in the recent literature (21,22). Diabetes is a systemic disease that can have multiple system involvement, and local recovery of nerve and muscle function after radical prostatectomy may be affected by diabetes. Therefore, diabetic patients should be informed about possible late recovery of postoperative urinary continence compared with nondiabetic patients after RARP.

Various surgical techniques are thought to impact urinary continence recovery in patients undergoing RARP (23). When evaluating early continence after radical prostatectomy, details regarding nerve sparing, bladder neck sparing, and bladder neck reconstruction is important. A systematic review by Reeves et al. showed that preservation of the NVBs is associated with improved time to continence after radical prostatectomy but not long-term continence rates (24). In our study, a NVB sparing procedure was performed for low-risk patients. However, due to the predominance of middle-high risk patients in the enrolled group, the percentage of nerve-sparing was only 15.7%. And in the univariate analysis, nerve-sparing did not influence continence recovery in this study (OR =0.877; 95% CI: 0.674–1.141). A recent study by Sood et al. showed that bladder neck preservation is the most important and probably the only factor responsible for early continence (25). With regard to bladder neck preservation, we did not intentionally perform bladder neck preservation during the procedure, and therefore, it was not included in the analysis. Furthermore, according to Porpiglia et al., performing total periurethral reconstruction improves early urinary control outcomes (17), and therefore, in our study, a total periurethral reconstruction was routinely performed in all patients.

The present study also has certain limitations. First, this study is a retrospective design with some inherent selection bias. Also, the sample size of this study was relatively small and, the number of cases between each catheterization group was not well matched. The number of patients who had their catheters removed ≥14 days was higher than in the 7- and 10-day groups. In addition, all RARP procedures were performed by an experienced high-volume surgeon in a single center. Therefore, our results might not be directly transferable to other centers. However, to the best of our knowledge, our study is not only one of the limited studies evaluating the impact of catheterization time on continence outcomes but also one of the few that focused especially on the impact of catheterization on OAB symptoms.

Reporting Checklist: The authors have completed the STROBE reporting checklist. Available at https://tau.amegroups.com/article/view/10.21037/tau-22-397/rc

Conflicts of Interest: All authors have completed the ICMJE uniform disclosure form (available at https://tau.amegroups.com/article/view/10.21037/tau-22-397/coif). The authors have no conflicts of interest to declare.

Ethical Statement: The authors are accountable for all aspects of the work in ensuring that questions related to the accuracy or integrity of any part of the work are appropriately investigated and resolved. The study was conducted in accordance with the Declaration of Helsinki (as revised in 2013). The study was approved by the clinical research ethics committee of Peking University First Hospital (protocol number: 2020[278]) and individual consent for this retrospective analysis was waived.