Renal cell carcinoma (RCC) accounts for 2–3% of all adult malignancies. In the past 10 years, the incidence rate of RCC has gradually increased. As many as half of the cases in developed countries are accidentally discovered, which is attributed to the popularization of and improvements in the means of detection. According to reports, the mortality rate of RCC in highly developed countries has declined since 1990 (1,2). Despite the rapid development of diagnosis and treatment methods for RCC, some patients are still diagnosed with advanced tumours with venous tumour thrombus (VTT), which poses a great challenge to urological surgeons. According to reports, approximately 4–10% of patients with RCCs develop VTT (3). Surgery is the main therapeutic means for these patients, and some patients achieve long-term survival after radical nephrectomy (RN) and thrombectomy (4). Limited by their sample sizes, previous studies showed great differences when describing the prognosis and prognostic factors of patients with RCCs and VTT, and the survival time of patients varied from several months to more than ten years (5-8). Prognostic models play an important role in assisting clinicians predicting prognosis based on personal experience. The prognostic models established by previous studies are based on patients who underwent nephrectomy and thrombectomy, but some patients didn’t receive surgery and previous models may have limited value for them (9,10). This study aimed to identify the independent prognostic factors for patients with RCC and VTT using large-sample data and to predict the survival of patients by establishing nomograms. We present the following article in accordance with the TRIPOD reporting checklist (11-13) (available at https://tau.amegroups.com/article/view/10.21037/tau-22-128/rc).

The process of patient screening and data analysis was shown in Figure 1. The SEER database of the National Cancer Institute collects cancer diagnosis, treatment, and survival data for approximately 30% of the US patients and is an important population-based resource (14). The clinical data of patients with renal malignant tumours diagnosed from 2000–2018 were downloaded from SEERstat software. The relevant guidelines and regulations of the SEER database were referred to when performing all methods. 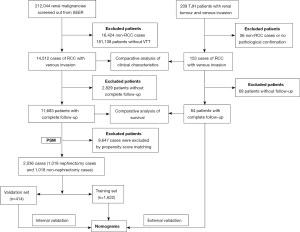 A total of 212,044 patients with renal malignant tumours were identified according to the criteria above, and further screening was conducted to exclude 16,424 cases of non-RCC, such as squamous cell carcinoma, urothelial carcinoma, and lymphoma 181,108 patients without VTT were also screened out. Finally, 14,512 cases of RCCs with VTT were obtained.

Furthermore, the clinical data of 209 patients with renal tumours and VTT admitted to Tongji Hospital (TJH) from January 2004 to December 2020 were collected. After screening, 153 cases pathologically confirmed RCC and VTT were obtained. Among them, 84 patients had complete clinical data and received full follow-up.

Data analysis and plotting were conducted with R 3.5.3 (www.r-project.org), and a comparative analysis was conducted between 14,512 SEER cases and 153 TJH cases. Continuous variables that fit a non-normal distribution, such as age and tumour size, were analysed by Kruskal-Walis test, and Fisher’s exact test was used for categorical variables (Table 1). Kaplan-Meier survival analysis was conducted with the “survival” package of R.

Propensity score matching (PSM), as a statistical tool, aims to help strengthen the causality in observational data by reducing the inherent selection bias (15). The ‘matchit’ function of the ‘MatchIt’ package was used to match patients with complete survival information from the TJH and SEER database in a 1:2 ratio by the “nearest” method. Kaplan-Meier survival analysis was performed again on the two matched groups. All clinical and pathologic features were used as caliper.

The thrombectomy procedure is extremely complicated. Whether the surgeon recommends nephrectomy + thrombectomy is obviously affected by the clinical characteristics of patients. Therefore, propensity score matching was performed in the SEER cases. The “nearest” method was used to match 1,018 cases in the non- nephrectomy group and 1,018 cases in the nephrectomy group in a ratio of 1:1, all clinical features were used as caliper. The difference in clinical characteristics between the two groups was eliminated after matching (Table 2).

Comparison of SEER and Tongji cohort

The baseline characteristics of 14,512 SEER patients and 153 TJH patients were compared (Table 1). The two groups were mainly male, with 9,864 (68.0%) and 115 (75.2%) male patients in the two groups, respectively. The median age of the SEER cohort was 64-year-old, and that of TJH patients was 58-year-old; the TJH patients were significantly younger than the SEER patients (P<0.001). The SEER patients had more left renal tumours [7,018 (48.4%) vs. 47 (33.3%), P<0.001]; clear cell RCC (ccRCC) was the main histological type in both groups, but the proportions of each subtype were different between the two groups (P<0.001). The TJH cases were more advanced than the SEER cases according to TNM stage [the eighth edition of the (American Joint Committee on Cancer) TNM staging criteria were used here], and the TJH patients also had tumour thrombus with a higher location (P<0.001); There was no significant difference in the proportion of patients who received systemic treatments (including chemotherapy, immunotherapy and targeted therapy) between the two groups. The SEER patients were followed-up for 1–226 months, with a median follow-up of 41 months. At the last follow-up, there were 9,036 deaths, 6,934 (76.7%) patients died of RCC. Eighty-four TJH cases were followed-up for 2–120 months, with a median follow-up of 16 months. 26 patients died by the last follow-up, and all of them died of RCC. Survival analysis was performed on the two groups. The 1-, 3-, and 5-year OS and CSS rates of the SEER patients were 79.0%, 60.9%, and 50.2%, and 81.0%, 65.3%, and 57.1%, respectively. The median OS and CSS were 60 and 87 months, respectively. The 1-, 2- and 3-year OS rates of the TJH patients were the same as the CSS rates, which were 77.7%, 61.5%, and 39.5%, respectively. The median OS and CSS were both 32 months. The log-rank test showed that there was no significant difference in OS (P=0.72) and CSS (P=0.66) between SEER and TJH cohorts. After balancing the characteristics of the patients (Table S2), there was still no significant difference in the OS (P=0.096) and CSS (P=0.37) between the two groups (Figure S1).

The differences in variables between the non-nephrectomy group and the nephrectomy group among the 2,036 SEER cases obtained after PSM were eliminated (Table 2). The Kaplan-Meier method was applied to analyse the influence of surgery on the OS and CSS of the SEER patients before and after matching. As a result, the difference in survival caused by surgery was reduced after matching (Figure S2).

A total of 2,036 SEER cases obtained after PSM were randomly divided into a training set (1,622 cases) and a validation set (414 cases) at an 8:2 ratio. There were no significant differences in the variables between the two groups (Table S1).

Establishment and validation of nomogram 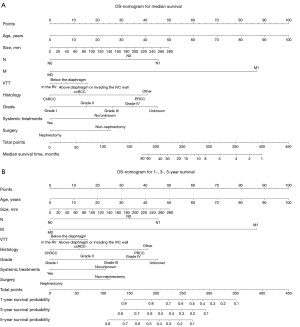 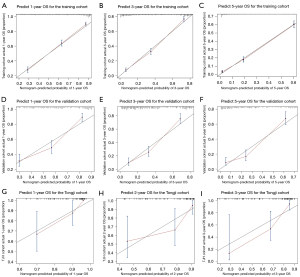 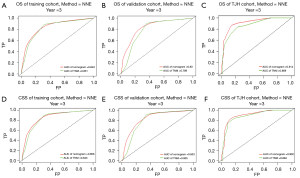 Figure 4 Time-dependent ROC curves of the nomograms and the prognostic models based on TNM staging for predicting the 3-year OS (A-C) and 3-year CSS (D-F) rates of the training set, validation set, and TJH cohort. The green curves are generated by the TNM model, and the red curves are generated by the nomograms; the AUCs of the nomograms are greater than those of the TNM model. OS, overall survival; NNE, nearest neighbour estimation; TJH, Tongji Hospital; AUC, area under curve; TP, true positive rate; FP, false positive rate; CSS, cancer specific survival; TNM, tumor, node and metastasis; ROC, receiver operating characteristic.

VTT is a characteristic of RCC progression. RCC with VTT was classified as T3 in the AJCC staging system. Approximately one-third of patients with tumour thrombus have distant metastasis (17,18). Patients with RCC and VTT have poor prognosis, the progression of surgical technique improved the 5-year OS of patients with non-metastatic RCC and VTT from 17% to 40%, but it is still not optimistic, especially in patients with metastases (19). Therefore, it is important to identify the prognostic factors of these patients and predict their survival. Then, we will discuss these controversial prognostic factors respectively.

VTT is usually accompanied by metastasis. Regardless of whether there is VTT, distant metastasis is an important risk factor (31-34). The 2019 EAU guidelines recommend that RN and thrombectomy should be performed in patients without distant metastasis regardless of the location of VTT, but there is no clear recommendation for metastatic cases (4). It remains controversial whether cytoreductive nephrectomy (CN) should be performed for patients with metastatic RCC and VTT. Some studies with few cases believed that CN can improve quality of life or improve OS, so it should be performed (28,35-37), nevertheless the CARMENA study showed that CN does not improve the survival of mRCC patients (38). In our study, metastatic cases accounted for a large proportion of all cases obtained by PSM (61.4%), and the results demonstrate that nephrectomy and thrombectomy predict favourable outcomes in patients with RCC and VTT.

The maximum diameter of the renal tumour (tumour size) is the basis for T1-T2 staging, but this parameter is not applied in T3 staging. In the studies from Chen and Tang, tumour size had no significant effect on the survival of patients with RCC and VTT (5,7). However, tumour size was an independent prognostic factor in other studies (9,19,27,41,42). In our study, a greater tumour size indicated a worse prognosis.

Regarding the differences between our institution and SEER database cases, we believe that it may be mainly caused by differences in socioeconomic factors. For example, patients in our institution is relatively younger, which may be mainly because our patients have been screened by local hospitals, and some elderly patients are more likely to choose conservative treatment in local hospitals. Another example is that patients in our institution have larger tumors and more advanced stage, which may be related to the lower frequency of routine physical examinations. In addition, these demographics and clinicopathological parameters were also significantly correlated with receiving surgery, suggesting that urologists prefer to operate on patients with favourable conditions.

There are also some limitations in our study, due to the limitations of the database, we failed to obtain baseline information about the patients; physical condition such as the Eastern Cooperative Oncology Group (ECOG) score, body mass index (BMI), comorbidities, approaches of surgery, and concentration of haemoglobin and albumin. In addition, systemic treatments in the SEER database include chemotherapy, immunotherapy and targeted therapy. The systemic treatments and radiotherapy regimens, type of drugs and start times can’t be identified which may bias the results of the study, and the clinical values of these features may be limited.

Patients developed RCC and VTT in the United States and central China had comparable outcomes. Age at diagnosis, tumour size, location of VTT, histological classification, nuclear grade, N stage, M stage, surgery, and systemic treatments are the nine key prognostic factors for RCC patients with VTT. The nomograms established based on key prognostic factors could predict the survival of patients in America and central China with reliable accuracy.

Funding: This work was supported by National Natural Science Foundation of China (No. 81702989).

Reporting Checklist: The authors have completed the TRIPOD reporting checklist. Available at https://tau.amegroups.com/article/view/10.21037/tau-22-128/rc

Conflicts of Interest: All authors have completed the ICMJE uniform disclosure form (available at https://tau.amegroups.com/article/view/10.21037/tau-22-128/coif). The authors have no conflicts of interest to declare.