Chronic bladder ischemia is a potential risk factor for the development of lower urinary tract symptoms (LUTS) and has been associated with co-existing cardiovascular disease and cardiovascular disease risk factors (1-3). A meta-analysis by Gacci et al. concluded that men with moderate to severe LUTS are at increased risk of having a major cardiac event (4). Because of this association, investigators have examined the role of chronic pelvic ischemia in the development of LUTS in both pre-clinical and clinical studies (5,6).

Indeed, studies of pelvic ischemia have led to a new understanding of a possible etiology of LUTS and have identified novel treatment targets (7-13). However, a recent review focuses on the lack of mechanistic treatments as current therapies are mainly focused on improving symptoms, rather than addressing the underlying pathophysiology (14). In this regard, a mechanistic proposal postulates that pelvic ischemia leads to progressive deterioration of detrusor muscle function, presenting initially as detrusor overactivity (DO) and ultimately leading to detrusor underactivity (DU) (15-18).

However, because chronic ischemia may lead to irreversible structural damage to the detrusor muscle, there is a pressing need to study the pathophysiology of acute ischemia to identify reversible points where potential interventions could restore both structure and function. This is especially true because of the strong association of LUTS with other comorbid conditions including erectile dysfunction, anxiety, depression, as well as the financial and personal burdens that come with a lifetime of symptom management (14).

Therefore, the aim of this project was to develop an ex-vivo porcine model to help define the duration of acute ischemia leading to measurable changes in bladder function and determine at what points those changes are still reversible with the restoration in flow.

We present the following article in accordance with the ARRIVE reporting checklist (available at http://dx.doi.org/10.21037/tau-20-669).

All porcine bladders and tissue utilized in these experiments were obtained from local abattoirs and do not require approval by the institutional animal care as they are not laboratory animals.

Porcine bladders were obtained from local abattoirs. As previously described, immediately after slaughter, the entire urinary tract and vasculature was removed en bloc, from kidneys to urethra, and cold perfused with Heparinized Krebs Henseleit (KH) solution (19). After removal of the kidneys and excess tissue, the ureters, bladder, urethra and vasculature were then placed into a physiologic solution, 3-(N-morpholino) propanesulfonic acid (MOPS) based buffer and transported on ice to the lab for use within 48 hours. Bilateral superior vesical arteries were identified, cannulated with polyethylene cannulas, and secured with 2-0 silk ties (Figure 1). Branching vessels and both ureters were suture ligated to limit perfusate leakage (Figure 1). A 16 Fr drainage catheter and a 7 Fr T-DOC® single sensor air charged bladder catheter (for filling and intravesical pressure monitoring, Laborie Inc., Mississauga, Ontario) were placed into the urethra (Figure 1). The filling catheter was connected to an Aquarius TT urodynamics system (Laborie Inc., Mississauga, Ontario) for infusion and pressure monitoring. The catheters were secured with an occlusion clip that prevented leakage. A catheter plug was placed into the 16 Fr catheter to prevent drainage until desired. 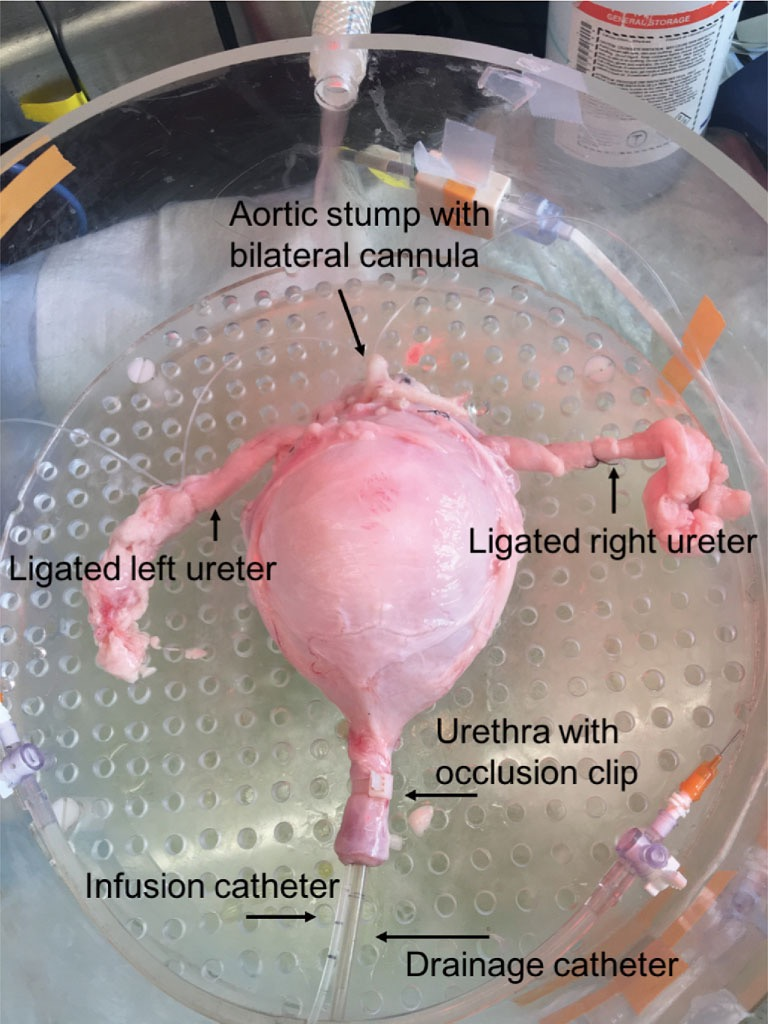 As previously described, isolated bladders were placed into a customized heated, humified chamber to replicate physiologic conditions (19-22). Perfusate was administered through bilateral vesical arteries via an in-line Transpac IV pressure transducer (ICU Medical, Clemente, CA) with flow monitored by an in-line ultrasonic flowmeter (IUF-1000, Radnoti LLC, Covina, CA). The KH buffer was gassed with 95%/5% O2/CO2. The Aquarius TT was used for data acquisition with intravesical infusion set at 50 mL/min for all fills, and all fills were to a volume of 250 mL. Following fills, bladders were actively voided via a contraction induced by infusion of 50 mL of potassium-enriched (110 mM KCl) solution via the bilateral super vesical cannulas at a rate of 25 mL/min and flushed with 50 mL of KH at a rate of 25 mL/min using a programmable infusion pump (Harvard Apparatus, Holliston, Massachusetts). Each contraction was induced isovolumetrically until peak pressure was achieved after ~2 min, and then the bladder was emptied by releasing the drainage catheter plug to simulate voiding.

Bladders were placed in the humidified chamber (Figure 1) and perfused bilaterally with warm, oxygenated KH buffer at 4 mL/min for 15 minutes, as in previous studies (19,21). Then two pre-experiment fill-empty cycles were performed to equilibrate the bladders and ensure viability. Following the first pre-experiment fill, the bladder was passively drained, and following the second pre-experiment fill, the bladder was actively voided via an induced contraction as previously described (19). Bladders were then subjected to four consecutive fill-active void cycles with varying degrees of ischemia as follows: Fill 1—control (4 mL/min), Fill 2—partial ischemia (2 mL/min), Fill 3—global ischemia (0 mL/min) and Fill 4—reperfusion (4 mL/min). An isovolumetric wait period was included between the end of filling and the induction of the voiding contraction. In one group of bladders, the degrees of ischemia were held for 15 minutes (15 min group) and in another group the degrees of ischemia were held for 30 minutes (30 min group).

For each contraction during the urodynamics ischemia protocol, passive pressure was measured at the end of the wait period immediately before the contraction, and the peak total pressure was measured during the contraction. Active pressure was calculated as the difference between the total and passive pressures. Pressure data from all fills were normalized to the control fill, as the perfusion rate of 4 mL/min fill approximates physiologic perfusion. Pressure values were normalized by calculating the ratio of each passive, total and active to the value of the control fill. 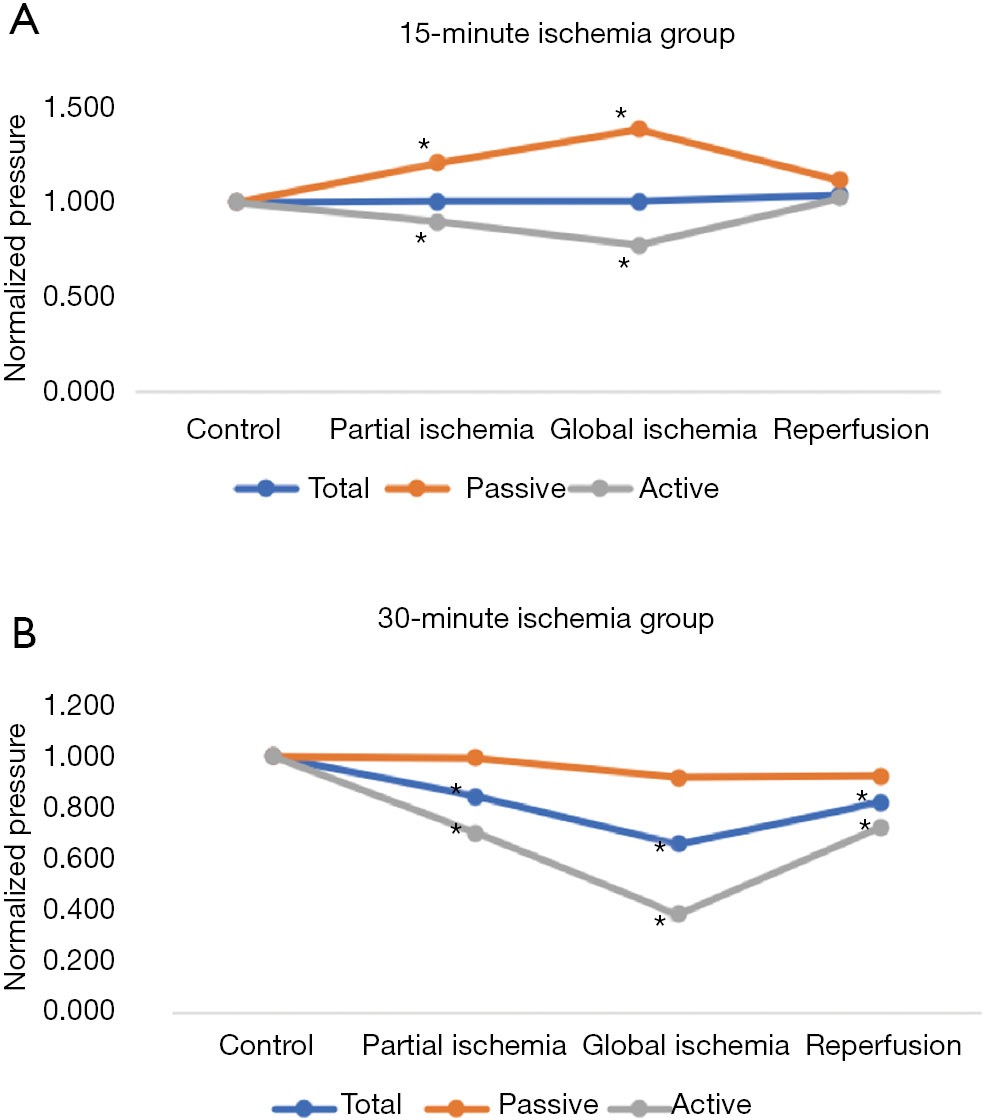 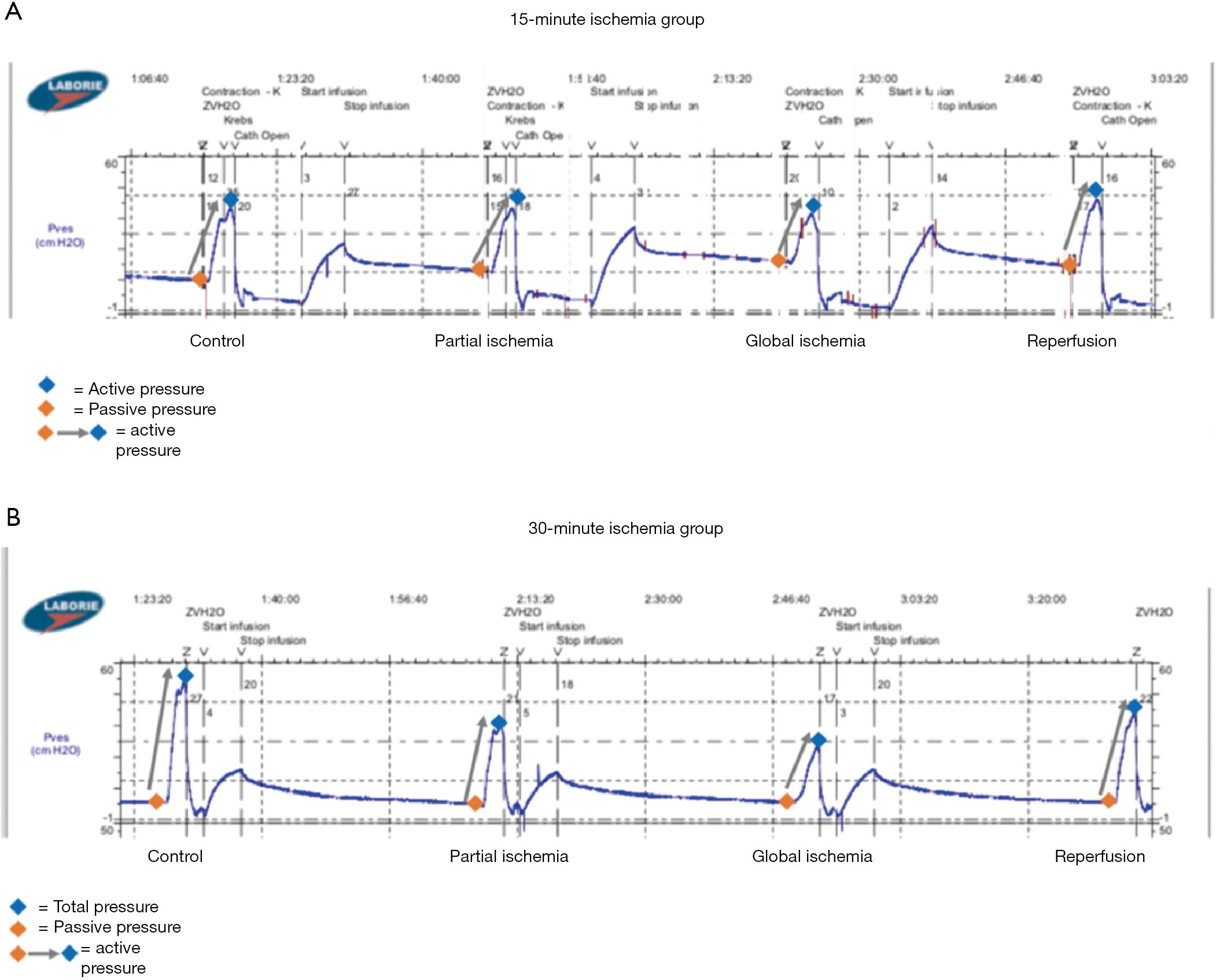 One mechanistic explanation for ischemia-induced voiding dysfunction is that decreased blood flow can lead to detrusor muscle damage through the generation of reactive oxygen species (ROS). In a study by Kirpatovsky et al., four hours of acute urinary retention was induced in rats. Examination of bladders immediately and 24 hours after retention demonstrated reduced blood flow with increased levels of ROS in the muscle and mucosa which persisted through the study. This increase in ROS paralleled changes in urinary symptoms with a significant increase in the frequency and amplitude of spontaneous contractions as well as detrusor tone. Likewise, in bladder strips, the effects of acute urinary retention manifested as significantly decreased contractile force (24). Additionally, acute ischemia in detrusor strips has been shown to increase the tone of the detrusor muscle, which is reversed with reperfusion. Interestingly, this increase in muscle tone was shown to be blocked with anticholinergics, which has been theorized to suggest a relationship between acute ischemia and increase local acetylcholine release (25).

At the cellular and genetic levels, the effect of ischemia has been examined by inducing acute unilateral ischemia in the rabbit bladder at time periods ranging from 1 hour to 7 days. Changes were identified on both the ischemic and non-ischemic sides of the bladder, with increased alterations seen on the ischemic side. These changes, including DNA synthesis, protein synthesis, and increased expression of early response genes such as c-fos and c-jun were similar to those observed after outlet obstruction and bladder overdistention (26). In vivo, two hours of bilateral pelvic ischemia in a rabbit bladder showed a significant decrease in contractile responses with alterations in Rho-kinase and smooth muscle regulatory proteins which further decreased after reperfusion (27). These results were in agreement with an older study investigating the effects of 1 hour of bilateral ischemia in the rabbit bladder, which showed a 48% reduction in contraction force (28).

Increasingly, porcine models are being used as a model to examine human physiology. This has been seen most well known in cardiac models, but has also been used in gastrointestinal models as well as pulmonary models (29-33). Recently this model has been used in the Urologic world to model bladder physiology and to be better understand pathology (19-21,25,34,35). In previous porcine strip studies, it has been shown that the lamina propria also contracts, in conjunction with the detrusor muscle. The urothelium and lamina propria respond to prostaglandins, like the detrusor muscle, as well as serotonin (34,35). This model measured the total contraction, without examining the exact contribution of detrusor vs. lamina propria or urothelium, however the majority of the contract is sustained by the detrusor.

Limitations of the current study include the relatively small sample size, use of male and female pigs, and the recognition that in vitro porcine bladders may not faithfully represent the human condition. These bladders were obtained from two abattoirs, so there could be some variability in the pig diet prior to slaughter. However, all bladders were harvested by study authors immediately after slaughter in order to standardize handling and experimentation. In addition, the bladders were perused with KH solution, which may not have the same effects as whole blood. Bladders were used between 24–48 hours after harvest. The time variability may be a confounding factor. To account for this, all bladders underwent two pre-study fill-void cycles to ensure the baseline contractility of the bladder is at the same magnitude as previously used bladders. However, the porcine bladder model represents an excellent approximation of the human bladder with easy ability to manipulate vascular inflow, and the results demonstrate a mechanistic progression from a compensated, overactive phase of acute ischemia to a decompensated, underactive phase of acute ischemia.

A whole porcine bladder model demonstrated different phases of decompensation during acute ischemia. With 15 minutes of ischemia, there is a compensated overactive phase where increases in passive pressure are offset by decreases in active pressure. However, with progression to 30 minutes of acute ischemia, there is a decompensated UAB phase where both passive and active pressures are decreased. This model provides a mechanistic explanation for the theoretical progression from overactive to UAB and provides rational targets for the study of future therapies aimed at ischemia-mediated voiding dysfunction.

We would like to acknowledge David Burk of Burk’s Farm and Mike Silver of Silver Ridge Farm for facilitating bladder procurement, Dr. Martin Mangino for assistance in the laboratory setup, and College of Engineering students Sydney Roberts and Ryan Musselman for assistance with experimental protocols.

Reporting Checklist: The authors have completed the ARRIVE reporting checklist. Available at http://dx.doi.org/10.21037/tau-20-669

Conflicts of Interest: All authors have completed the ICMJE uniform disclosure form (available at http://dx.doi.org/10.21037/tau-20-669). The authors have no conflicts of interest to declare.

Ethical Statement: The authors are accountable for all aspects of the work in ensuring that questions related to the accuracy or integrity of any part of the work are appropriately investigated and resolved. All porcine bladders and tissue utilized in these experiments were obtained from local abattoirs and do not require approval by the institutional animal care as they are not laboratory animals.