Bladder cancer (BC) is one of the top ten most frequently occurred cancer in the world, with nearly 150,000 deaths and 400,000 new cases yearly (1,2). Etiology studies indicate that cigarette smoking and various occupational exposure are the most important risk factors for bladder cancer, and other non-environmental risk factors including age, sex, ethnicity, body weight, lifestyle and family history (3). Whole-genome sequencing studies of bladder cancer identifies recurrent mutations in TP53, RB1, TSC1, FGFR3 and PIK3CA genes, and amplification or deletion of PPARG, E2F3, EGFR, CCND1, MDM2 and CDKN2A genes, revealing the molecular pathogenesis of bladder cancer (4). According to genetic alternations, cell origin and tumor invasion depth, bladder cancer can be classified into non-muscle invasive bladder cancer (NMIBC) or muscle-invasive bladder cancer (MIBC). Among these two subtypes, NMIBC occurs more often but with a low tendency to progress, while MIBC is more lethal with a high rate of metastasis. Transurethral resection and following chemotherapy or bacille Calmette-Guérin (BCG) adjuvant immunotherapy are current treatment options for NMIBC, while radical cystectomy and following adjuvant chemotherapy and radiation therapy are frequently used in MIBC. Recent progress in bladder cancer targeted therapy or immunotherapy such as using of Lapatinib or anti-PD1/PDL-1 mAb hold promising potential, however the effect is limited and there is no apparent change in the 5-year survival rate of MIBC patients due to the highly metastatic competency and heterogeneous lineages of cancer cells (5-7). Therefore, it is vital to understand the molecular mechanisms of BC development, find new therapeutic targets, and develop new regimens for BC treatment.

Long noncoding RNAs (lncRNAs) are non-protein-coding RNA transcripts longer than 200 nucleotides. They are suggested to play pivotal functions in multiple biological processes, including cell differentiation, proliferation, autophagy, and apoptosis, by regulating the expression of different genes. Indeed, lncRNAs are also proved to involve in the development and progressing of many human diseases, including bladder cancer (8). Cancer-associated region long noncoding RNAs (CARLos) are newly discovered lncRNAs in the 8q24.21 region of human genome, including CARLo-7. Recently study indicates CARLo-7 is the only bladder cancer specific lncRNA in the CARLos cluster, and high CARLo-7 expression is correlated with advanced tumor stage (9). Moreover, CARLo-7 (also known as CASC11, LINC00990 and MYMLR) has been demonstrated to play a role in the tumorigenesis of various cancers. In gastric cancer, CARLo-7 is highly expressed, while silencing CARLo-7 suppresses proliferation and induces apoptosis and cell cycle arrest (10). In ovarian cancer, CARLo-7 overexpression facilitates cell proliferation and inhibits apoptosis through regulating miR-182, and high CARLo-7 expression predicts poor prognosis of ovarian cancer patients (11). Up-regulated CARLo-7 is also found in lung cancer tissues and cell lines, and silencing CARLo-7 represses cell proliferation through miR-302/CDK1 axis (12). Furthermore, CARLo-7 is involved in the maintaining of oncogenic MYC transcriptional activity and cell cycle progression though in low expression level, suggesting an important role of CARLo-7 in MYC-related tumorigenesis (13).

Written informed consent was obtained from all patients enrolled in this study. All procedures performed in this study involving human participants were in accordance with the Declaration of Helsinki (as revised in 2013). A total of 143 BC samples and paired adjacent normal tissues were collected from Peking Union Medical College Hospital between March 2015 and April 2018. The inclusion criteria were defined as certain diagnosis of bladder cancer. Also, patients who had received any treatment such as chemotherapy, radiotherapy, and biological medication (monoclonal antibodies) before the sampling were excluded from the study. The collected samples were at once frozen in liquid nitrogen and stored at −80 °C for future use. The Ethics Committee approved this study of Qianfoshan Hospital Affiliated to Shandong University, SYXK (Jing) 2017-0015. The clinical features of the enrolled patients were shown in Table 1. 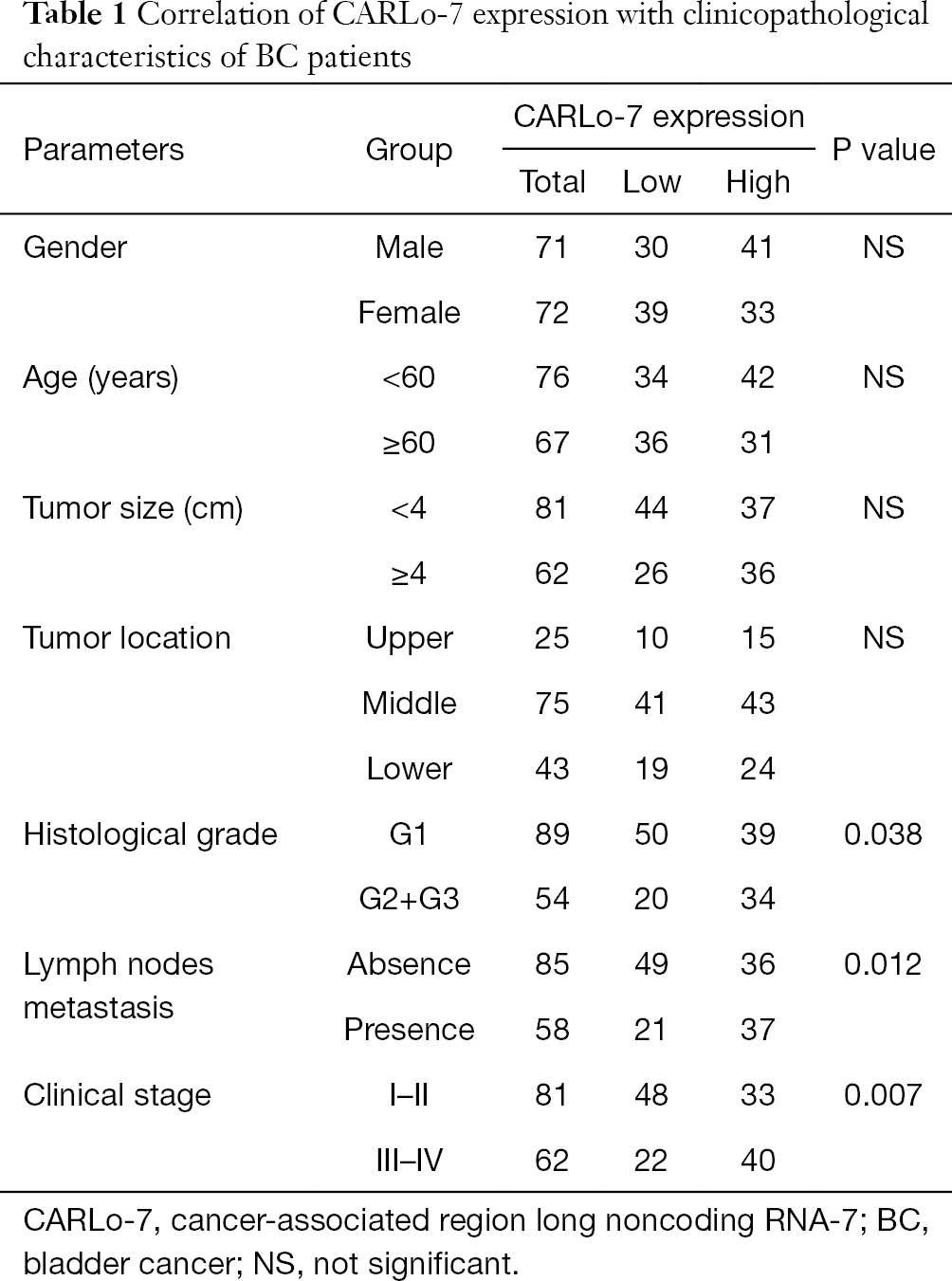 Cell viability was measured by the CellTiter-Glo Luminescent Cell Viability Assay kit (Promega #G7572), as the protocol showed. Briefly, the cells and CellTiter-Glo reagents were balanced to room temperature for 30 minutes. Then remove the culture medium, add the CellTiter-Glo reagents (100 µL per well in 96-well plates) into the well, and mix thoroughly on an orbital shaker. Incubate the plate at dark for 10 minutes, then record the luminescence signal on a microplate reader.

Seeded the cells (1×106/well) in the upper chamber (Costar Corp, USA) without serum, then filled the lower chamber with a medium holding 20% FBS. Then cells were cultured for 48 hours, and migration cells were fixed by 4% paraformaldehyde for 15 minutes and stained with crystal violet. Cell invasion was evaluated by pre-coating the filter with Matrigel (BD Biosciences, USA), then allowed the cells to invasion through the filter for 48 hours and stained with Giemsa dye. All experiments were conducted in triplicates.

To explore the potential role of CARL0-7 in BC, the expression of CARLo-7 in BC and adjacent normal tissues was evaluated by qRT-PCR. As shown in Figure 1A, CARLo-7 levels were significantly upregulated in BC tissues compared with paired adjacent normal tissues, corresponding with the earlier study. Moreover, we further analyzed the clinicopathological characteristics of BC patients and found that high CARLo-7 expression in BC tissues was closely associated with higher histological grade and clinical stage and lymph nodes metastasis (Table 1). T24 and HT1197 are frequently used cell models of bladder cancer, and our pre-test results indicated that silencing CARLo-7 suppressed cell proliferation of these cells more efficiently than other bladder cancer cell lines. Thus BC cell lines T24 and HT1197 were selected to elucidate the mechanisms of the CARLo-7 in BC initiation and progression in our study. SV-HUC-1, a human epithelial SV40 immortalized uroepithelium cell line, was used as a control. The RT-PCR result showed that CARLo-7 was overexpressed in T24 and HT1197cells compared with SV-HUC-1 (Figure 1B). Collectively, our results showed that lncRNA CARLo-7 was upregulated and correlated with poor prognosis in BC patients. 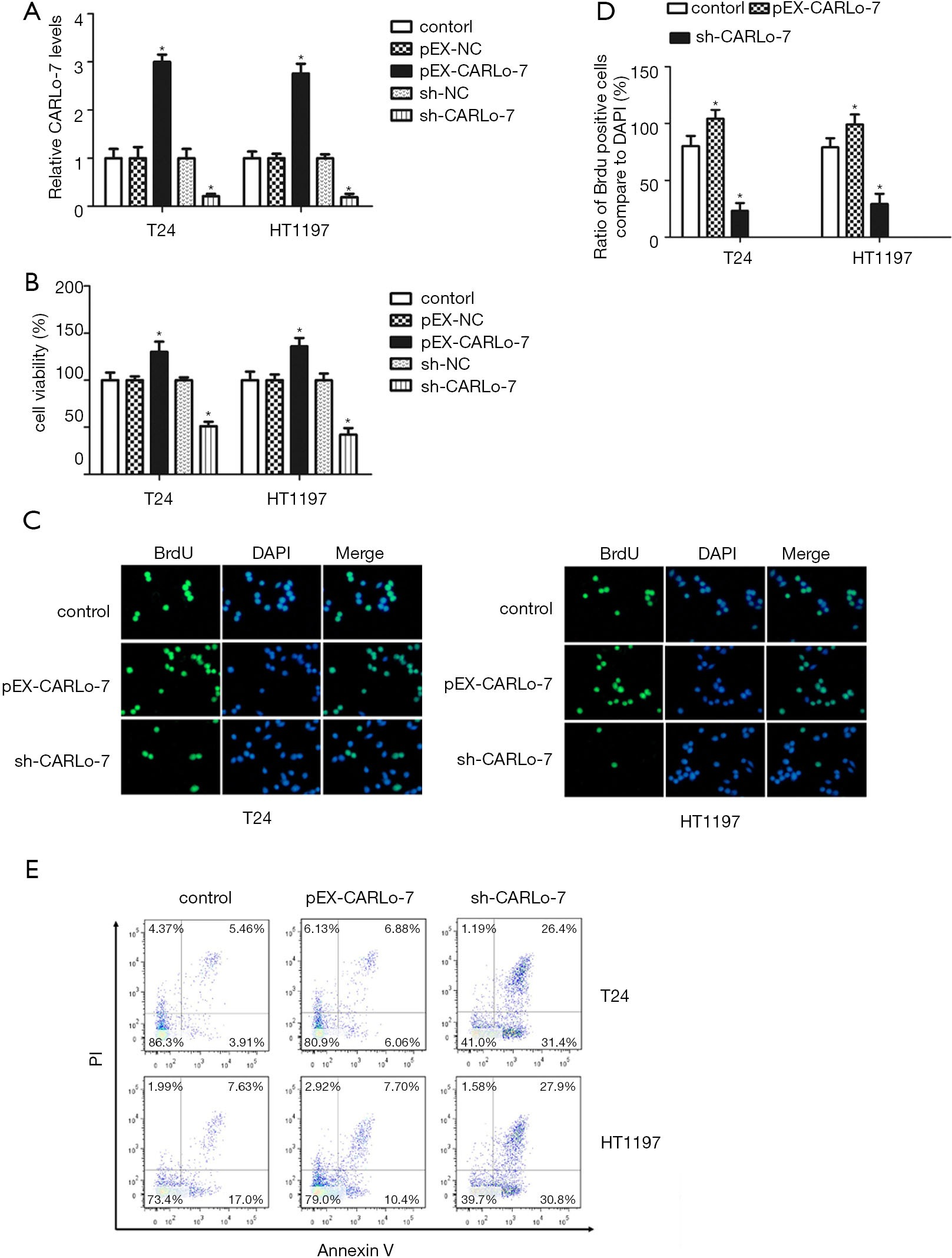 Enforced CARLo-7 expression facilitated migration, invasion, and EMT of BC cells while silencing CARLo-7 had the contrary effects 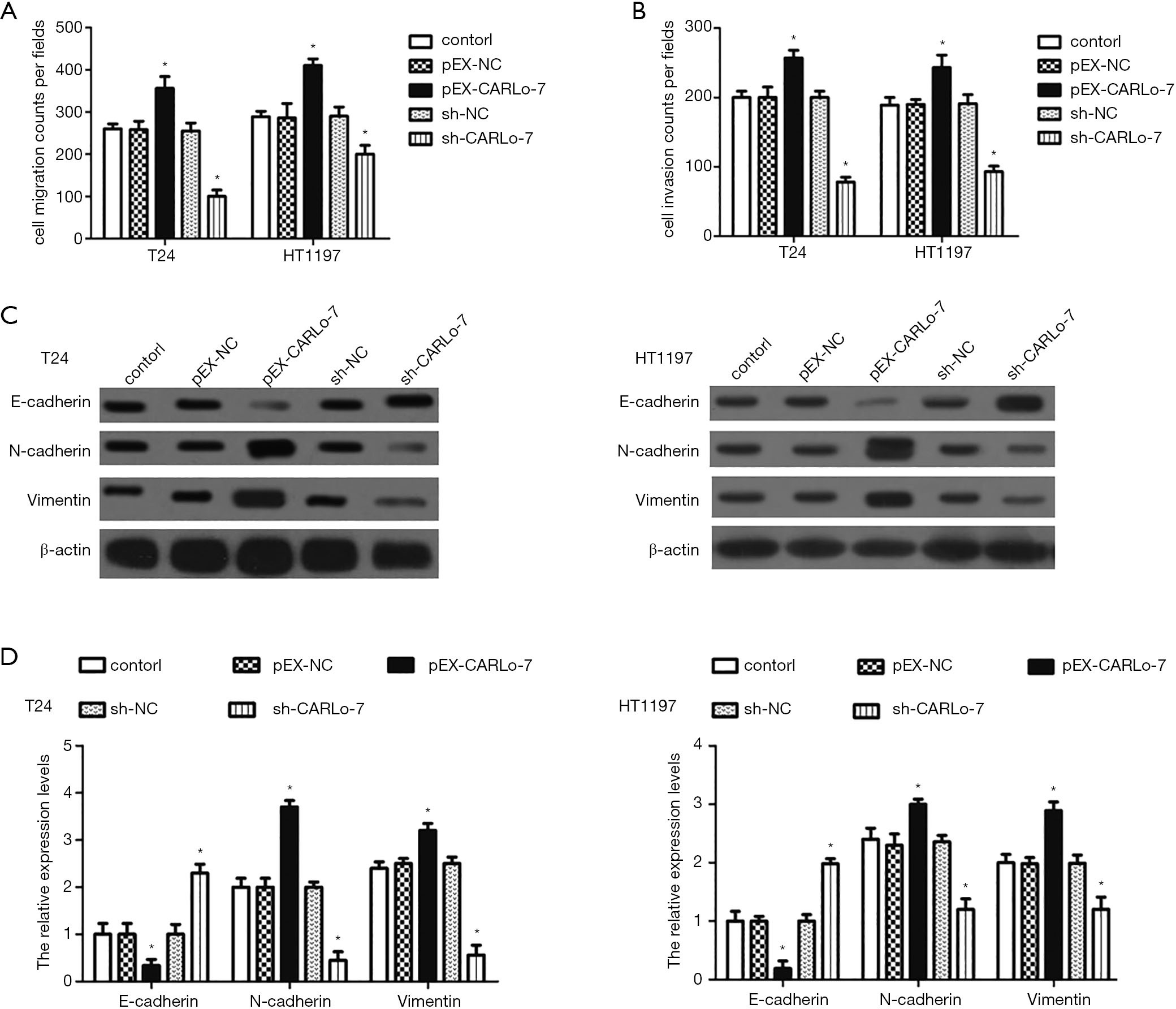 Figure 3 Enforced CARLo-7 expression facilitated migration, invasion, and EMT of bladder cancer cells while silencing CARLo-7 had the contrary effects. T24 and HT1197 cells were transfected with pEX-CARLo-7, pEX-NC, sh-CARLo-7, or sh-NC, then cells were used for Transwell cell migration (A) or invasion (B) assay, or collected cell lysates for western blot (C,D). Parental T24 or HT1197 cells were used as a control group. The protein expression of E-cadherin, N-cadherin, and vimentin was decided by Western blot (C), and protein expression normalized to β-actin was shown (D). *P<0.05 compare to the control group. CARLo-7, cancer-associated region long noncoding RNA-7; EMT, epithelial-mesenchymal transition. 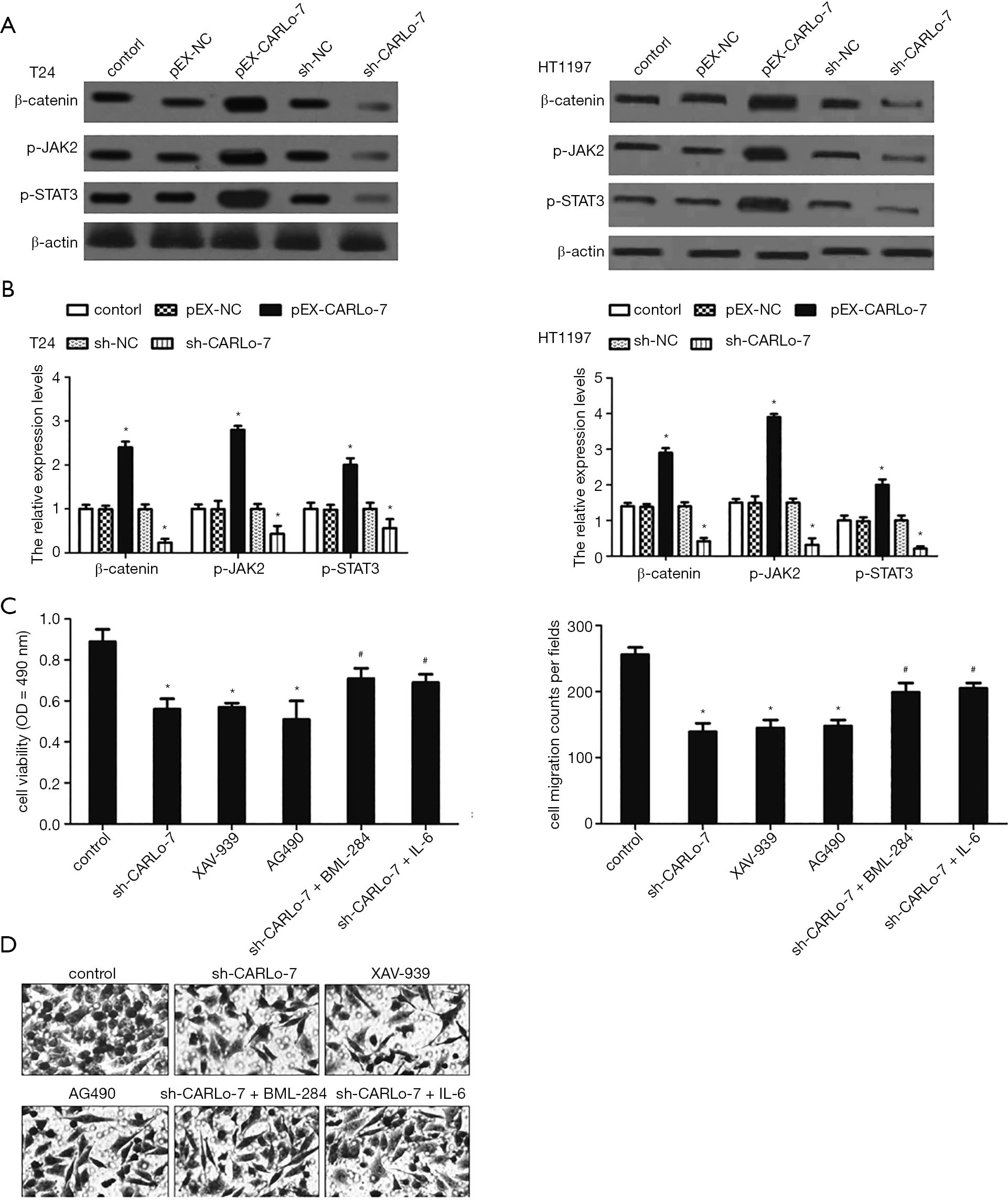 Figure 4 Wnt/β-catenin and JAK2/STAT3 signaling pathways took part in regulating cell proliferation and migration by CARLo-7. (A,B) T24 and HT1197 cells were transfected with pEX-CARLo-7, pEX-NC, sh-CARLo-7, or sh-NC, then β-catenin, p-JAK2, and p-STAT3 levels were determined by Western blot (A). The ratio of β-catenin, p-JAK2, and p-STAT3 normalized to β-actin has been calculated (B). (C,D) T24 cells were transfected with indicated vectors and treated with XAV-939, AG490, BML-24 or IL-6, cell viability (C), and migration (D) were evaluated. The magnification is 800 × for photos of migration cells. *P<0.05 vs. control group; #P<0.05 vs. sh-CARLo-7 group. CARLo-7, cancer-associated region long noncoding RNA-7.

Though NMIBC had a favorable prognosis with a low tendency to metastasis compared with MIBC, it has a high rate of recurrence despite surgery resection and local chemotherapy (20). Furthermore, the more aggressive MIBC still has a dismal prognosis despite the recent advance in cancer therapy (21). Thus, it is necessary to find new biomarkers to predict the prognosis of BC patients. In this study, we found that CARLo-7 was significantly upregulated in both BC tissues and cell lines, showing that CARLo-7 might involve in the progression of BC. Thus, we evaluated the correlations between CARLo-7 expression and clinicopathologic features of BC patients and found that high CARLo-7 expression was closely associated with advanced histological grade, lymph nodes metastasis, and higher clinical stage. These results suggested that CARLo-7 could be a biomarker for predicting the prognosis of BC. Also, our results showed that cell proliferation, migration, invasion, and EMT were all significantly suppressed by CARLo-7 knockdown in BC cells. However, enforced CARLo-7 expression facilitated proliferation, migration, invasion, and EMT of BC cells. Therefore, these results further confirmed that CARLo-7 could be an effective biomarker for BC prognosis.

There are increasing evidence lncRNAs participate in the initiation, progression, EMT, and metastasis of BC. For example, the upregulation of H19 and MALAT-1 increased the metastasis property of BC cells (22,23). Moreover, high expression of UCA1 was demonstrated to facilitate proliferation, tumorigenesis, and chemoresistance of BC cells through regulating the Wnt/β-catenin pathway (24). TGFβ1 induced EMT of BC cells, and this was partially mediated by lncRNA ZEB2NAT through increasing ZEB2 expression (25). Our results and a previous study (9) indicated CARLo-7 could be a biomarker for BC prognosis, but the exact role of CARLo-7 in BC patients has not been elucidated. In our study, we found that CARLo-7 was highly expressed in BC tissues. Thus, we hypothesized that CARLo-7 might promote the progression of BC. We knocked down CARLo-7 in T24 and HT1197 cells by transfecting with sh-CARLo-7 and found that silencing CARLo-7 suppressed proliferation, migration, invasion, and induced apoptosis BC cells significantly. More importantly, we further detected the expression levels of EMT-related nj found that CARLo-7 knockdown suppressed EMT process. Taken together, our study firstly revealed CARLo-7 might function as an oncogene and play a role in the progression of BC.

Wnt/β-catenin pathway is crucial for embryo development and tissue homeostasis. Also, Wnt/β-catenin signaling pathway is demonstrated to be involved in tumor initiation, progression, and metastasis of various cancers, including breast cancer (26), glioblastoma (27), esophageal cancer (28), and ovarian cancer (29). JAK/STAT signaling pathway consists of three main components: cell surface receptor, JAKs, and two STAT proteins (30). Dysregulation of the JAK/STAT pathway also plays a role in the initiation and progression of BC (20,31). In our study, we found that XAV-939 and AG490 both suppressed cell proliferation and migration of BC cells, which suggested that Wnt/β-catenin and JAK2/STAT3 pathway were activated in BC. Moreover, silencing CARLo-7 inhibited the activation of the JAK2/STAT3 and Wnt/β-catenin pathway significantly. Activating the JAK2/STAT3 and Wnt/β-catenin pathway by BML-284 or IL-6 significantly reversed the inhibition effects of CARLo-7 knockdown on cell proliferation and migration. Therefore, our results suggested that CARLo-7 exerted an oncogenic role in BC cells by activating JAK2/STAT3 and Wnt/β-catenin signaling pathways.

In summary, our results showed lncRNA CARLo-7 functioned as an oncogene in BC cells. Enforced CARLo-7 expression facilitated proliferation, migration, invasion, and EMT of BC cells, while silencing CARLo-7 had the contrary effects. Moreover, silencing CARLo-7 inhibited the activation of the JAK2/STAT3 and Wnt/β-catenin pathway significantly. Our study supplied new insights for the pathogenesis of BC and might supply new therapeutic targets for improving BC treatment.

Reporting Checklist: The authors have completed the MDAR reporting checklist. Available at http://dx.doi.org/10.21037/tau-20-1293

Conflicts of Interest: All authors have completed the ICMJE uniform disclosure form (available at http://dx.doi.org/10.21037/tau-20-1293). The authors have no conflicts of interest to declare.

Ethical Statement: The authors are accountable for all aspects of the work in ensuring that questions related to the accuracy or integrity of any part of the work are appropriately investigated and resolved. The Ethics Committee approved this study of Qianfoshan Hospital Affiliated to Shandong University, SYXK (Jing) 2017-0015. Written informed consent was obtained from all patients enrolled in this study. All procedures performed in this study involving human participants were in accordance with the Declaration of Helsinki (as revised in 2013).