Preoperative pelvic floor muscle exercise does not reduce the rate of postprostatectomy incontinence: evidence from a meta-analysis and a systematic review

Radical prostatectomy (RP) is the best treatment for localized prostate cancer. About 45% of men diagnosed with prostate cancer will undergo RP. Urinary incontinence (UI) is a common complication experienced after RP. UI often occurs after the removal of the catheter. Especially within the first 6 months after surgery, UI has a significant, negative impact on the function health-related quality of life (QoL) of a patient. The most common reason for UI after RP includes urethral sphincter deficiency or injury, as well as bladder dysfunctions such as detrusor overactivity, an impaired bladder filling sensation and low bladder compliance (1). Furthermore, Postoperative UI significantly affects the QoL. Despite improved surgical techniques, UI remains a complication for many patients undergoing RP. Clinically, we have adopted many treatment methods including conservative therapy, preoperative pelvic floor muscle exercise (PFME), pharmacotherapy, penile clamp, pad use, bulking agents, behavioral interventions, artificial urinary sphincters and polypropylene mesh using the transobturator approach (2). PFME after prostate surgery may be effective in reducing postoperative UI (3,4). Several studies have investigated whether postoperative PFME improves UI after RP. PFME improves both the strength and coordination of the striated muscles of the pelvic floor and could be performed with or without biofeedback. Although a good deal of work in the past few years reported that pelvic floor muscle training helps reduce UI after prostatectomy, there is still controversy regarding the relationship between PFME and post-prostatectomy UI. Therefore, we performed systematic review and meta-analysis to assess the relationship between PFME and UI.

The following article is presented in accordance with the PRISMA reporting checklist (available at http://dx.doi.org/10.21037/tau-20-684).

A literature search of electronic databases including PubMed, Medline, Embase, Web of Science and the Cochrane library was performed on 20th October 2019. The search process was based on a combination of the items including “prostatectomy”, “pelvic floor muscle training” or “pelvic floor muscle exercise”, or “urinary incontinence”. The time frame searched was between October 2014 to October 2019. A total of 41 articles were obtained from the literature. Conference reviews were not included in the meta-analysis since an adequate amount of data was needed from each article. A total of 15 articles were not included based on what was presented in the abstract and full article. There were also 3 duplicated articles in the group. After eliminating inadequate articles and duplications, a total of 18 studies were included in the analysis.

Study selection was performed by two independent authors. Inclusion criteria included: (I) all men undergoing RP, (II) a form of intervention with or without preoperative PFME guidance (physiotherapist or nurse) or biofeedback (auditory, visual or tactile), (III) prostate cancer stages lower than T3, (IV) RP that was open, laparoscopic or robot-assisted, (V) the first PFME session occurring preoperatively, and (VI) randomized and retrospective research. Studies were excluded if they (I) failed to meet the inclusion criteria, (II) included conference research, (III) contained insufficient data, or (IV) did not compare or have preoperative PFME.

Two investigators extracted data from the primary literature. PRISMA was used for reporting of this systematic review and meta-analysis. The relationship between RP and UI were studied and defined. A total of 18 studies investigating postoperative incontinence had sufficient quantitative data appropriate for the meta-analysis. To evaluate these results, data was pooled into preoperative PFME intervention or no PFME. UI at 1, 3, 6 and 12 months were analyzed using the random effects approach for DerSimonian and Laird. Results were presented as incontinence odds ratios (ORs) <1 favoring the control.

Data were extracted from eligible studies to shed light on the associations between PFME and UI in the form of risk ratios (RRs) with a 95% confidence interval (CI). The random effects model (DerSimonian-Laird method) or the fixed effects model (Mantel-Haenszel method) were used for meta-analysis based on the heterogeneity of the involved studies. If significant heterogeneity was observed (P<0.10 or I2>50%), a random effects model was utilized. Otherwise, the fixed effects model was applied. Furthermore, publication bias was estimated using contour-enhanced funnel plots. All P values were calculated using a two-sided test and a value less than 0.05 was considered as statistically significant. All statistical analyses were performed using Stata12 (StataCorp LP, College Station, Texas, USA), and Microsoft Excel (V.2007, Microsoft Corporation, Redmond, Washington, USA).

Studies included in the meta-analysis

The meta-analysis included 18 published studies and only 13 contained sufficient data on postoperative UI for analysis. A flow diagram representing the article selection process is showed in Figure 1. Table 1 describes the clinical features of the enrolled studies, summarizes the definition of UI, pelvic floor muscle training programs and how the results were evaluated. Most studies were published recently, so a review is provided on this topic. 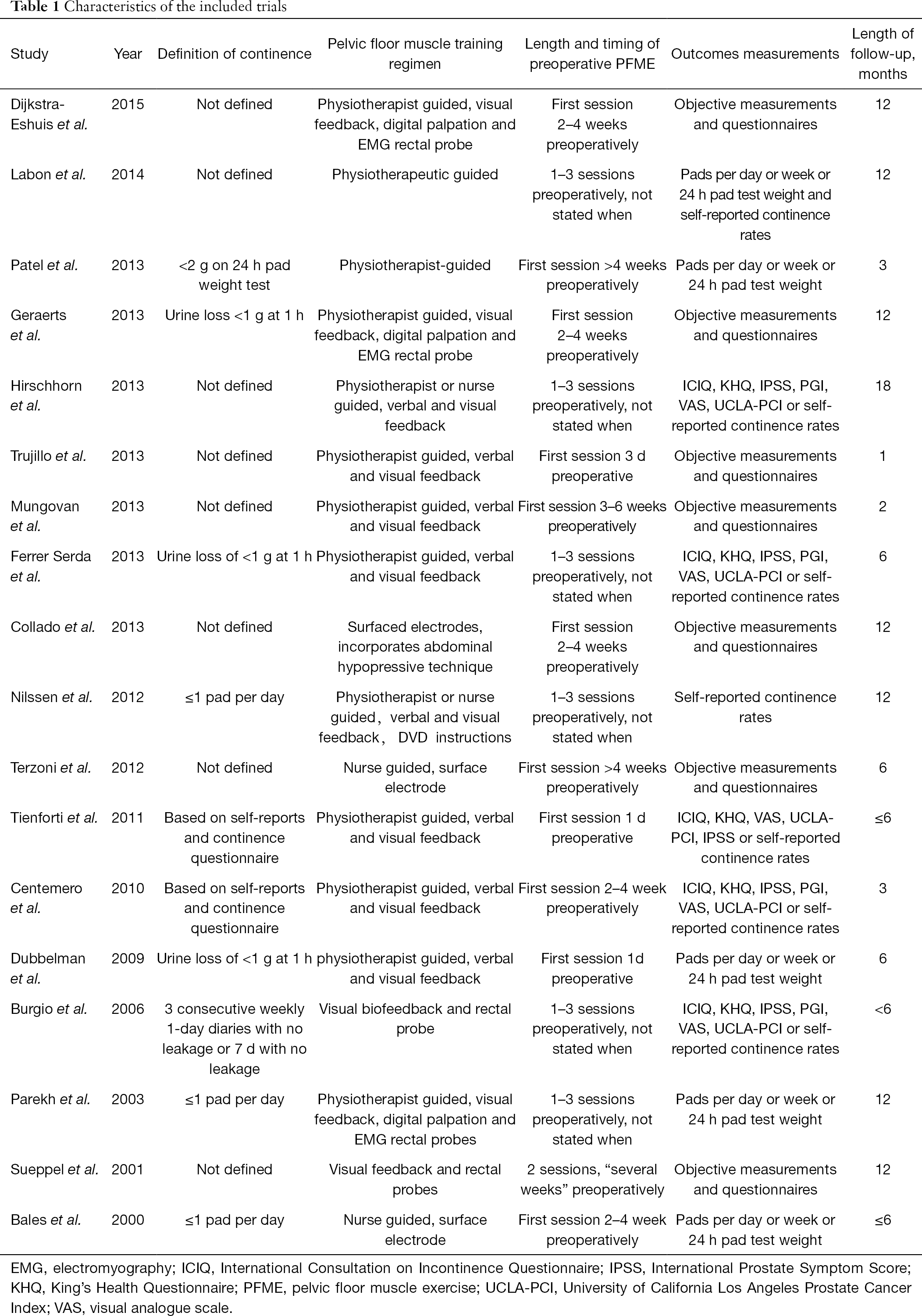 Quality of the included studies

Contour-enhanced funnel plots were used to assess publication bias for each study. Sixteen of the 18 studies included randomized controlled trials. However, five trials did not describe how patients were randomized. Among the 18 articles, only 3 surgeons and assessors were unaware. Only the surgeon was blinded in of the study conducted by Centemero et al. (5). Most studies did not mention blinding, but in these two studies, therapists were referred to as being blinded.

Most papers mentioned and explain why patients were missing. Three studies did not explain the reason for the incompleteness of the data and did not mention reasons for patients dropping out. Only Ocampo-Trujillo et al. (6) contained information for missing patients.

There is no consistent conclusion for a definition of urinary continence. Several studies used more than one method to define continence. UI of <1 g at 1 h were used in three of the studies (7-9). UI of ≤1 pad per day was defined in three of the studies (10-12). UI of <2 g on a 24 h pad weight test was defined in one study (13). Accounts of self-reporting and a continence questionnaire were used in two studies (5,14). Only one study used 3 consecutive weekly 1-day diaries with no leakage or 7 with no leakage defined as UI (15). There were eight studies with no clear definition of urinary continence (6,14,16-21).

Heterogeneity existed in the QoL tools, including the ICIQ-UI, ICIQ-Overactive Bladder (ICIQ-OAB), UCLA-PCI, IPSS, visual analogue scales, KHQ, Pelvic Floor Inventories Leiden, Hopkins symptoms checklist and a medical outcomes study short form. Some studies used a combination of these QoL tools. The rest of the studies used a single QoL tool, although there was no consensus on a preferred tool.

Many different methods were used in this study, including pelvic floor muscle training with or without biofeedback. The extent of detail described in each study also differed. Table 2 summarizes the exercise regimens.

Time of the PFME sessions for these studies ranged from 20 minutes to 1 hour and some performed these sessions twice a week or just once a week. 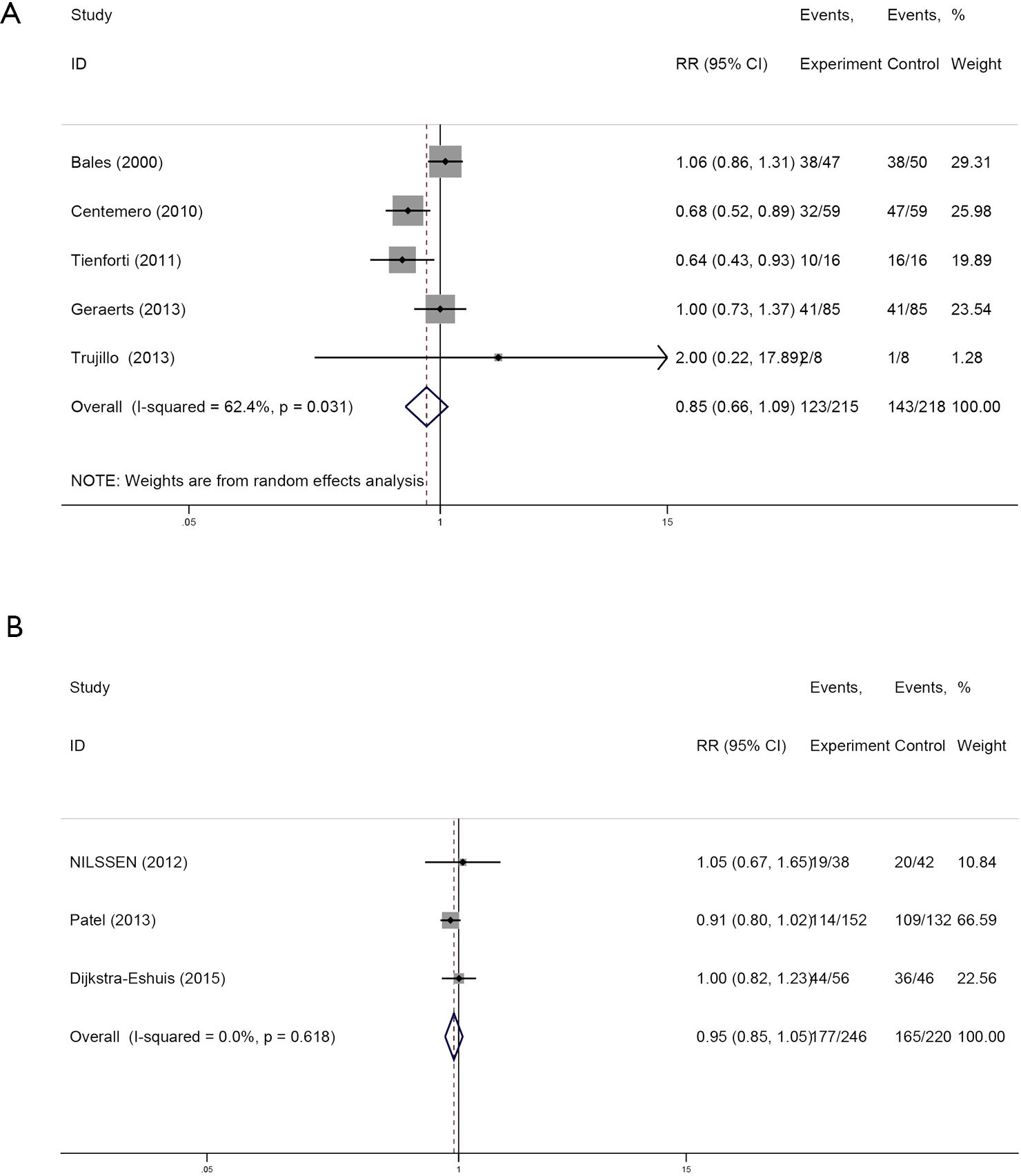 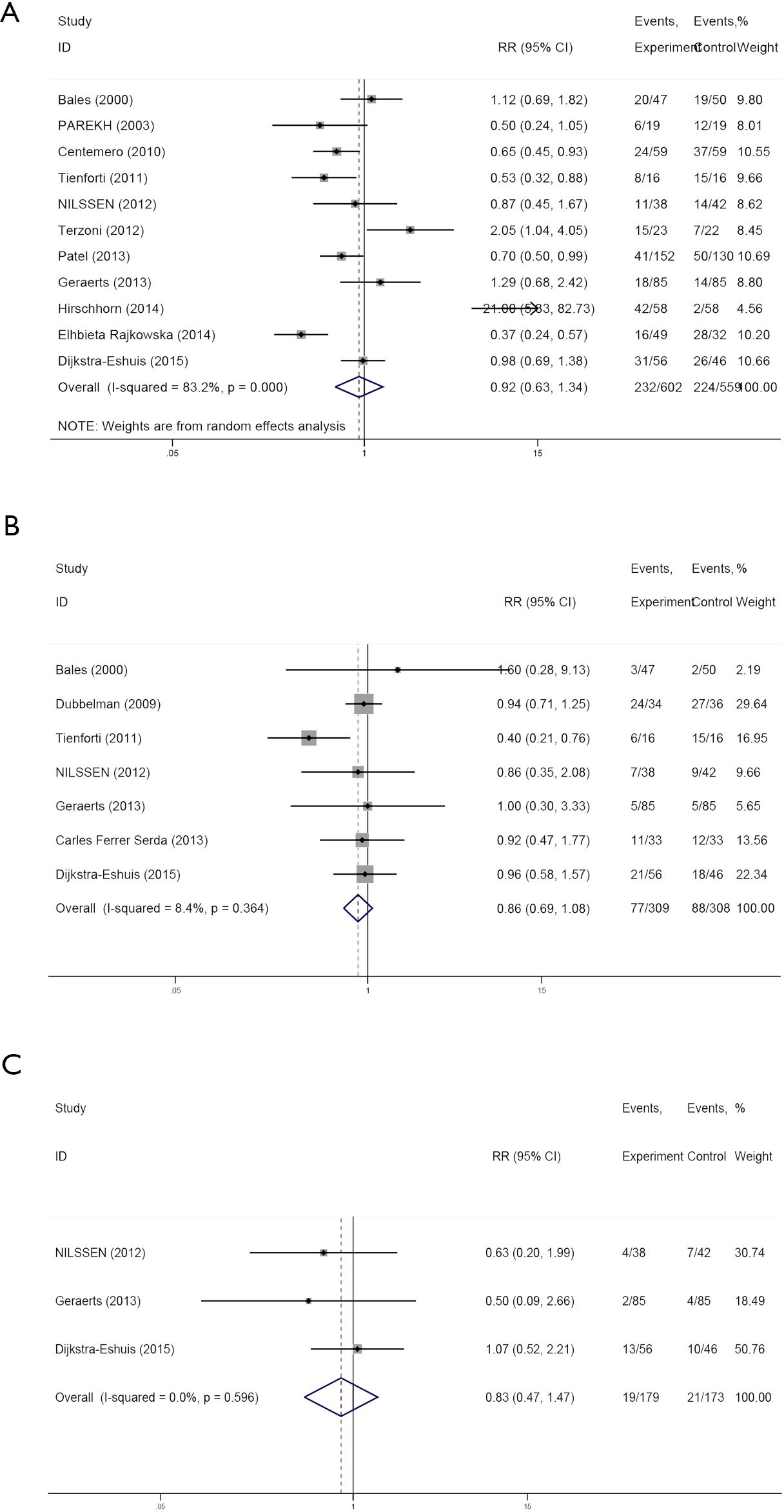 In this meta-analysis, we used contour-enhanced funnel plots for count variates (Figure 4). Based on this figure, points in the funnel plot represent the studies. No publication bias was observed.

Strengths: (I) we performed a meta-analysis and formulated conclusions differing from previous studies; (II) moreover, inclusion of the articles is up to date and the number of patients increased dramatically; (III) there was no uniform PFME scheme, but there were uniform definitions and training methods used in these studies.

Limitations: (I) our research was based on previous work and was not the first systematic review and meta-analysis of preoperative PFME and postprostatectomy incontinence performed; (II) we used randomized controlled trails that require large sample sizes and long-term follow-up periods that may update and change our findings. In addition, because of this, it is easy to lose patient information over time.

Radical prostatectomy is the most optimal treatment option for patients diagnosed with localized prostate cancer. Approximately 6–20% of patients experience UI after prostatectomy, which is one of the most common complications associated with surgery (23). Some work showed that the degree of pelvic floor muscle training determined the recovery of UI after RP (23). However, we found that PFME does not effectively improve and recover UI after prostatectomy.

The mechanisms behind prostate postoperative UI are multifactorial. Continence is caused by a complex interaction between smooth and striated muscle fibers (24). There is no consistent conclusion in the literature regarding whether UI after prostatectomy was caused by detrusor (bladder) muscle or the sphincter (25). The most important causes of persistent UI after RP were new detrusor overactivity and the lack of intrinsic sphincter caused by impaired sphincter function (26-28). Although overactive activity was the leading cause of incontinence after prostatectomy, many studies showed that internal fixation of the sphincter was a major cause of post-RP UI despite other factors (24). This was even despite the fact that published literature confirmed preoperative PFME was beneficial for UI after RP (29,30). However, our work showed that this view is contradictory. Therefore, we extended this research and proved that preoperative PFME did not improve postprostatectomy incontinence. A meta-analysis developed by Chang et al. concluded that preoperative PFME was effective for postoperative UI (22). Overall, the 7 articles that were included showed a significant reduction in the risk of UI after 3 months of 36% RP surgery with preoperative PFME. However, there was no significant differences observed between 1 and 6 months, which indicated that preoperative PFME not affect the long-time incontinence rate.

Even though this is not the first meta-analysis analyzing the relationship between pelvic floor muscle training and UI after prostatectomy, there are some advantages to our meta-analysis. First, the studies included in our study were recent and more patients were included for statistical analysis, making our conclusion more convincing. Second, we performed pelvic floor muscle training for prostatectomy for up to one year. In addition, funnel plots revealed that publication bias was not an issue in our analysis.

However, this study also faced several limitations. (I) Our research was based on previous studies and was not the first systematic review and meta-analysis for preoperative PFME and postprostatectomy incontinence. (II) We use randomized controlled trails that require large sample sizes and long-term follow-ups to update our findings and can easily lose patient information with time. (III) There was no uniform regimen for PFME, the definition of continence and QoL tools that were used. (IV) The diversity of patients led to inconsistent management, which influenced our meta-analysis.

Despite these limitations, we conducted extensive meta-analysis to find that preoperative PFME did not improve UI after prostatectomy. Currently, many hospitals still use preoperative PFME, which leads to extra expenses, unnecessary trouble for patients, increased hospital time, and a waste of medical resources including an increased for doctors and nurses. Our research supports the discontinuation of PFME prior to prostatectomy and confirms this approach based on our data.

Reporting Checklist: The authors have completed the PRISMA reporting checklist. Available at http://dx.doi.org/10.21037/tau-20-684

Conflicts of Interest: All authors have completed the ICMJE uniform disclosure form (available at http://dx.doi.org/10.21037/tau-20-684). The authors have no conflicts of interest to declare.