Bladder dysfunction can be subdivided into overactive bladder (OAB) and underactive bladder (UAB) syndrome. OAB syndrome is defined by the international continence society (ICS) as “urinary urgency, usually accompanied by frequency and nocturia, with or without urgency urinary incontinence, in the absence of urinary tract infection (UTI) or other obvious pathology” (4). The prevalence of OAB in population-based survey of men from multiple studies ranged from 10.8% to 27.2% (5-9). Canadian based studies revealed a prevalence of OAB in 13.1% to 14.8% of adult men (5,7).

There are many studies in the literature examining the risk of prostate cancer in patients with lower urinary tract symptoms (LUTS) (10,11). However, there are few studies specifically examining the prevalence of LUTS prior to prostate cancer treatment. One of those study examining men diagnosed with localised prostate cancer, reported a LUTS rate of 50.1% in Japanese men and 46.9% in American men, using AUA symptom score of ≥8 as a cut-off for LUTS (12). This is in comparison to the prevalence of moderate to severe LUTS in the general Japanese and American population of 36.6% and 25.5%, respectively (13). Namiki et al. reported a mean AUA symptom score to be 9.1 and 8.7 in Japanese and American men with localised prostate cancer, respectively (12). Rees et al. reported a mean IPSS score of 11.6 in men with locally advanced or metastatic prostate cancer, which is compared with 4.4 in control men in the study (14). Two other large studies examined the rates of storage LUTS in men with newly diagnosed localised prostate cancer. The ProtecT study group found baseline rates of storage LUTS to be common with 33% of men suffering from frequency and 22% from nocturia (15). Similarly, the CEASAR study reported the rates of urinary frequency to be 19–24% (16). None of these studies specifically examined the rates of OAB in prostate cancer patients prior to any treatment.

It is important to manage quality of life issues for men with prostate cancer during their prolonged cancer survivorship. This begins with a better understanding of the baseline demographics. Therefore, this study aims to elucidate the prevalence of LUTS, OAB, sexual dysfunction, depression and anxiety in Canadian men with newly diagnosed localised prostate cancer before initiation of treatment. We present the following article in accordance with the STROBE reporting checklist (available at http://dx.doi.org/10.21037/tau-20-689).

This is a prospective cross-sectional study of Canadian men with newly diagnosed localized prostate cancer. Participants were recruited from the Prostate Cancer Centre in Calgary, Canada—a metropolitan area of approximately 1.4 million residents. The Prostate Cancer Centre offers an information seminar for men newly diagnosed with localized prostate cancer. At the seminar, patients were offered the option to participate in this research study. Those who met the eligibility criteria were provided with further details and a written informed consent was obtained. The protocol for this study was approved by the Health Research Ethics Board of Alberta (HREBA.CC-16-0850). This study conformed to the provisions of the Declaration of Helsinki (as revised in 2013) (19). All patients enrolled completed the informed consent form.

Patients were recruited from the period of June 2017 to July 2018. Men were eligible for this study if they were 18 years of age or older, spoke English or had a translator available, had not been previously diagnosed with prostate cancer, and had not yet started prostate cancer treatment. Individuals were excluded if they had previously been diagnosed with prostate cancer, if metastatic disease was suspected, or if they were unwilling to adhere to the data collection protocol. A PSA cut-off level was not used as an exclusion criterion provided the patient had no metastatic disease (T1–4N0–1M0) on staging scans. Potential participants were offered an incentive of $20–$30 if they completed the entire study.

Patients included in this study were sent a link to a secure website to complete their intake survey (a postal mail option was available for patients without internet access). This intake survey included: (I) demographic data, (II) medical history information, and (III) patient-reported outcome (PRO) instruments. The PRO instruments included the international prostate symptoms score (IPSS) (20), OAB-V8 (21), EQ-5DTM (22), and the Expanded Prostate Cancer Index Composite short form (EPIC-26) (23). An OAB-V8 global score of 8 or higher indicates the possibility of OAB (21). Patients with OAB-V8 global score of 8 or higher were offered a urodynamics study to further evaluate their OAB.

Clinicopathological data were extracted from participants’ medical records by a trained data enterer. All data were collected and managed using REDCap electronic database securely hosted by The University of Calgary’s Clinical Research Unit (24,25).

A total of 83 patients with newly diagnosed prostate cancer were included in this study. The baseline demographics of our cohort are outlined in Table 1. 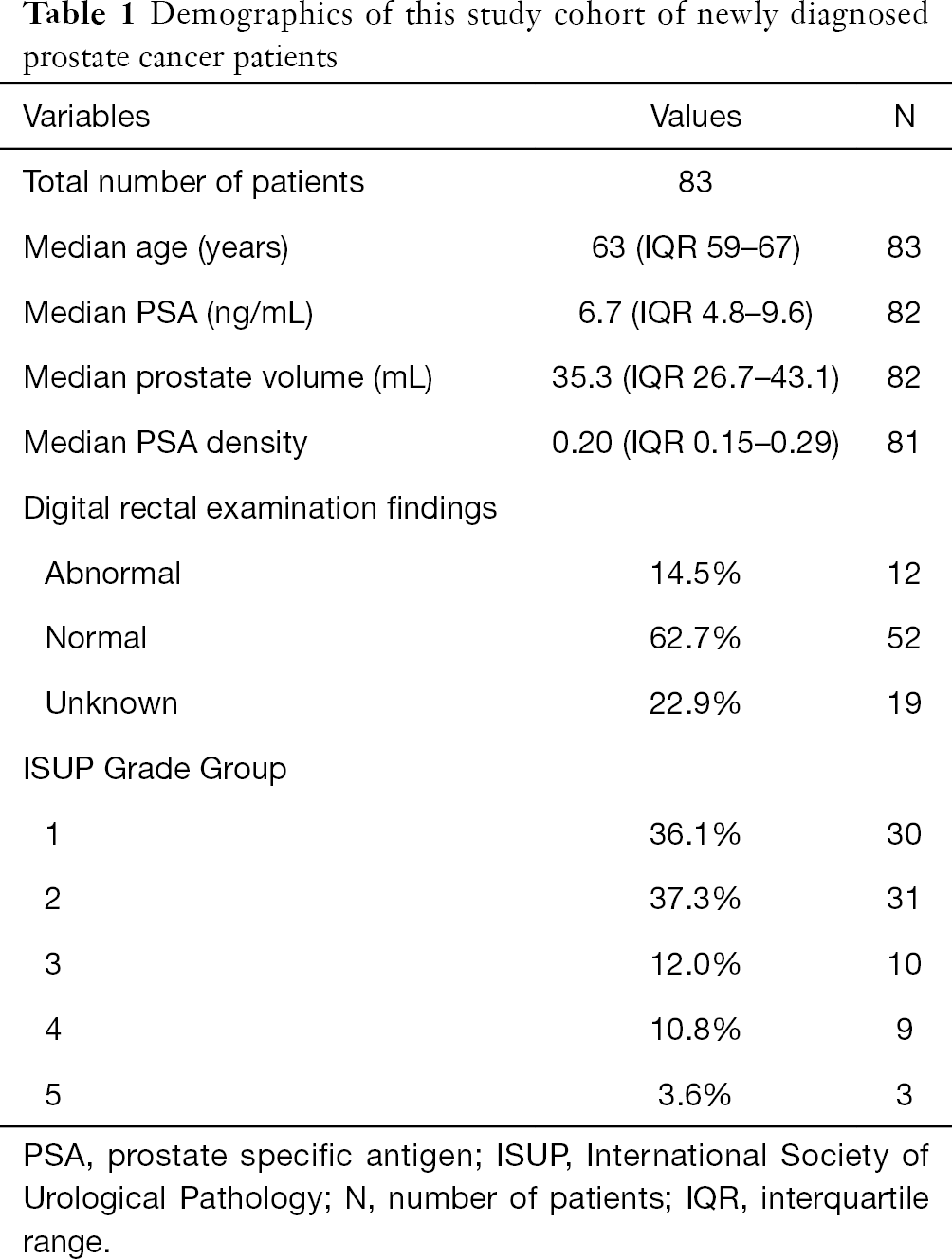 Univariate analyses revealed IPSS and PSA to be the only predictor of OAB on OAB-V8 (Table 2). This is consistent with the finding that IPSS correlates well with OAB-V8 with a Spearman’s rho correlation coefficient of 0.753 (P<0.001). The rate of OAB was not statistically different for patients with intraductal prostate cancer compared with those without (70% vs. 50%, P=0.31, Fisher’s exact test). Similarly, the rates of OAB did not differ in patients with high (ISUP 4 and 5), intermediate (ISUP 2 and 3) and low risk (ISUP 1) prostate cancer (33.3%, 61.5%, 55%, P=0.53). The rates of OAB was also not different for presence of prostate cancer in different parts of the prostate gland (apex, mid-gland and base). On multivariate analysis, only IPSS was a statistically significant predictor of OAB (P=0.002).

This study found LUTS and OAB to be a significant problem affecting half of Canadian men with newly diagnosed localised prostate cancer. We found that 44.7% of men had moderate or severe LUTS based on IPSS, and 55.8% of men had likely OAB based on OAB-V8 score. The rate of OAB in our study cohort is significantly higher than the 14.8% rate of OAB found in a Canadian population study looking at people aged 35 and over (5). This remains true even if only comparing with the older subgroup of men in the study by Corcos et al. (5), as the subgroup analysis found the prevalence of urge urinary incontinence and OAB to be 7.5%, 21.5% and 29.5% for men aged 55–64, 65–74, and 75 and above, respectively. A similar rate of OAB has been reported by another Canadian population study which found the prevalence of OAB symptoms to be 13.1% in men aged 18 and above (7). The subgroup analysis of the previous study found men aged 41–64 and ≥65 to have a prevalence of OAB symptoms of 17.5% and 14.9%, respectively (7).

The rates of LUTS and OAB is likely higher in our study population because men with urinary symptoms are more likely to seek healthcare advice and be diagnosed with their underlying prostate cancer (26). This is supported by a previous study which has shown that men treated for LUTS were more likely to undergo prostate biopsy (11). Furthermore, a study of Japanese and American men has found a similarly higher rate of moderate or severe LUTS on IPSS of 50.1% in Japanese men and 46.9% in American men (12). Studies that have performed urodynamic studies prior to radical prostatectomy have demonstrated detrusor overactivity (DO) rates to be 18.7–25.5% (27,28). PRO scores prior to UDS were not available in these studies. Given that DO is found in 76.1% of men with OAB symptoms (29), it is likely that the prevalence of OAB symptoms is higher than the reported DO rates in studies of UDS pre-radical prostatectomy. It is important to recognise the significant rates of LUTS and OAB in prostate cancer patients, as it may need to be treated prior to radiotherapy and addressed following radical prostatectomy to ensure it is not contributing to a poorer continence outcome.

We found IPSS to be the only predictor of OAB defined using OAB-V8. The two score also strongly correlated with each other. This is not unexpected as IPSS has many components that are also tested in OAB-V8 such as frequency, urgency and nocturia. We have previously published our cross-walk modelling of OAB-V8 score from IPSS score (30). Apart from IPSS, there were no other factors that were predictive of OAB on OAB-V8. Previous studies have shown OAB to be more prevalent with increasing age (5). However, given the similar age of our patient cohort with an interquartile range of 59–67, age becomes a less important factor in predicting OAB. ISUP grade group and location of tumour in apex, mid-gland or base does not influence rates of OAB. This is expected as prostate cancer tends to be located in the peripheral zone and therefore unlikely to contribute to urinary symptoms, especially for localised prostate cancer.

The prevalence of anxiety and depression amongst men diagnosed with prostate cancer is not insignificant. We found that 28.8% of men in this study reported to be slightly or moderately anxious or depressed based on EQ-5D questionnaire. Similarly, 22.9% of men reported to have a moderate or big problem with feeling depressed based on the EPIC questionnaire. This is not dissimilar to the meta-analysis which revealed pre-treatment depression prevalence rate of 17.27% and pre-treatment anxiety prevalence rates to be 27.04% (17). It is important to screen for and recognise the presence of anxiety and depression pre-operatively, and to provide appropriate psychological support and treatment to improve the overall holistic patient care.

This study has several limitations including the relatively small sample size of this study. Despite the small sample size, to our knowledge this is the first study reporting baseline OAB-V8 scores in men with localised prostate cancer. Another limitation is that not all patient responded to questionnaires, with 91.6% responded to IPSS, and 62.7% responded to OAB-V8, EPIC-26 and EQ-5DTM. The authors acknowledge that there is a possibility that men with more symptoms are more likely to participate in the study and completion of questionnaires. However, there is no incentive for men to do so as treatment regimen is not a part of the study. The questionnaires were offered to all patient who agreed initially to participate in this study, hence the dropout of questionnaires is likely to be random. The use of medications for treatment of LUTS and OAB were no uniformly reported and therefore not included in the result of the study. This may have resulted in an underestimation of the true prevalence of OAB as mild cases may have resolved with use of these medications. Finally, as this is a single centre study in Canada, clinicians should understand the limits of generalizing our findings, especially for men outside of Canada.

OAB is a significant problem in men with newly diagnosed localized prostate cancer, with a prevalence of 55.8% based on this study. Baseline sexual dysfunction in this population of men is also significant with only half of the men able to achieve an erection adequate for intercourse. Anxiety and depression also affect a quarter of these men. It is important to identify these pre-operatively as it can impact on management decisions and counselling of patients on functional outcome. With increasing focus on cancer survivorship, adequate treatment of these issues starting pre-treatment can potentially improve the quality of life for men post-prostate cancer therapy.

The authors would like to thank Dave Bateman and the Prostate Cancer Centre in Calgary, AB for their assistance with identifying potential study participants.

Funding: This work was awarded by Prostate Cancer Canada, Grant #D2016-1353, and is proudly funded by the Movember Foundation.

Reporting Checklist: The authors have completed the STROBE reporting checklist. Available at http://dx.doi.org/10.21037/tau-20-689

Conflicts of Interest: All authors have completed the ICMJE uniform disclosure form (available at http://dx.doi.org/10.21037/tau-20-689). The authors have no conflicts of interest to declare.

Ethical Statement: The authors are accountable for all aspects of the work in ensuring that questions related to the accuracy or integrity of any part of the work are appropriately investigated and resolved. The protocol for this study was approved by the Health Research Ethics Board of Alberta (HREBA.CC-16-0850). This study conformed to the provisions of the Declaration of Helsinki (as revised in 2013) (19). All patients enrolled completed the informed consent form.