Primary nephrotic syndrome (NS) is a common urinary system disease of the pediatric population. In this condition, a variety of causes may lead to an increase in the permeability of the glomerular filtration membrane, resulting in the loss of a large amount of plasma protein and a series of symptoms, such as low proteinemia and hyperlipidemia (1). There are a variety of pathological types of NS, with micropathological type as a common type. Glucocorticoid therapy is the main means of clinical treatment of NS, but there are still some children who suffered from repeated attacks after treatment, or even progress to hormone-resistant NS, with poor therapeutic effect (2). Exosomes are membrane vesicles secreted by cells and widely exist in human body fluids. Exosomes contain specific proteins, lipids, nucleic acids and other substances, which are important carriers involved in cell communication and material transport (3). Some scholars believe that the overexpression of microRNA (miRNA) plays an important role in the progression of kidney disease, and the expression level of specific miRNA expression can reflect the severity of kidney disease (4). It has been found that miRNAs in humoral exosomes had high abundance and stability, while the expression of miRNAs in urine exosomes was closely related to the physiological function, pathological changes and treatment strategy selection of the kidney (5). At present, relevant studies have shown that certain miRNAs including miR-200a, miR-200b, and miR-29 play important roles in renal diseases like lupus nephritis and immunoglobulin A (IgA) nephropathy (6). However, few studies how examined the correlation between miR-23b-3p, miR-30a-5p, and miR-151-3p levels and the pathogenesis and progression of NS. Therefore, this study aimed to detect the levels of miR-23b-3p, miR-30a-5p, and miR-151-3p in the urine exosomes of children with NS, and to evaluate their application as auxiliary diagnostic indicators for NS. We present the following article in accordance with the STARD reporting checklist (available at http://dx.doi.org/10.21037/tau-20-1260).

The study was approved by the ethics committee of People’s Hospital of Ningbo University (approval ID: 2020-069). All the children’s family members signed the informed consent. All procedures performed in this study involving human participants were in accordance with the Declaration of Helsinki (as revised in 2013).

The inclusion criteria for participants were the following: (I) clinical examination met the diagnostic criteria of NS (7), urine protein >50 mg/kg/d; (II) aged ≤12 years; (III) all family members signed the informed consent; (IV) no ingestion of drugs that could affect the test indicators. The exclusion criteria were the following: (I) patients diagnosed with secondary or congenital NS; (II) patients with severe urinary tract infection or other kidney diseases; or (III) patients with malignant tumors by examination.

Extraction of total RNA from exosomes

Morning urine (8 mL) was taken from children with NS and healthy children. After being centrifuged at room temperature to remove the cells, the supernatant was collected and stored in a refrigerator at −80 °C. The exosomes were extracted from the supernatant with an exosome extraction kit; and then the total RNA of the exosome was extracted using the Trizol method. After being dissolved by the addition of diethyl pyrocarbonate (DEPC), the RNA was stored in the refrigerator at −80 °C until use.

TaqMan probe primers were used to detect the levels of miR-23b-3p, miR-30a-5p, and miR-151-3p in urine exosomes of children. The reverse transcription reaction system was 10 µL of the total volume. After mixing, the mixture was put in the PCR machine to perform the reverse transcription reaction, with the reaction conditions of 16 °C for 30 min, 42 °C for 30 min, and 85 °C for 5 min; it was finally stored at 4 °C. The reaction system of Real-time fluorescent quantitative PCR (RT-qPCR) was 20 µL in a 96-well PCR plate. After mixing, the reaction conditions were performed at 95 °C for 5 minutes, 95 °C for 15 seconds, and 60 °C for 1 minute, for a total of 40 cycles.

Data were analyzed using SPSS 20.0 statistical software (IBM, Armonk, NY, USA). Measurement data are expressed as (), and were analyzed using the single-factor analysis of variance among multiple groups. Least significant difference (LSD) t-test was used for multiple comparisons of the homogeneity of variance, and Tamhane’s T2 test was used for the analysis of data with uneven variance. Measurement data of non-normal distribution are expressed as [M (P25–P75)], Mann-Whitney U test was used for the comparison between two groups, while the Kruskal-Wallis H test was used for comparison among multiple groups. Receiver operating curve (ROC) curve analysis was used to analyze the diagnostic value of urinary exosome indicators for NS. Results with a P value <0.05 were considered to be significantly different. 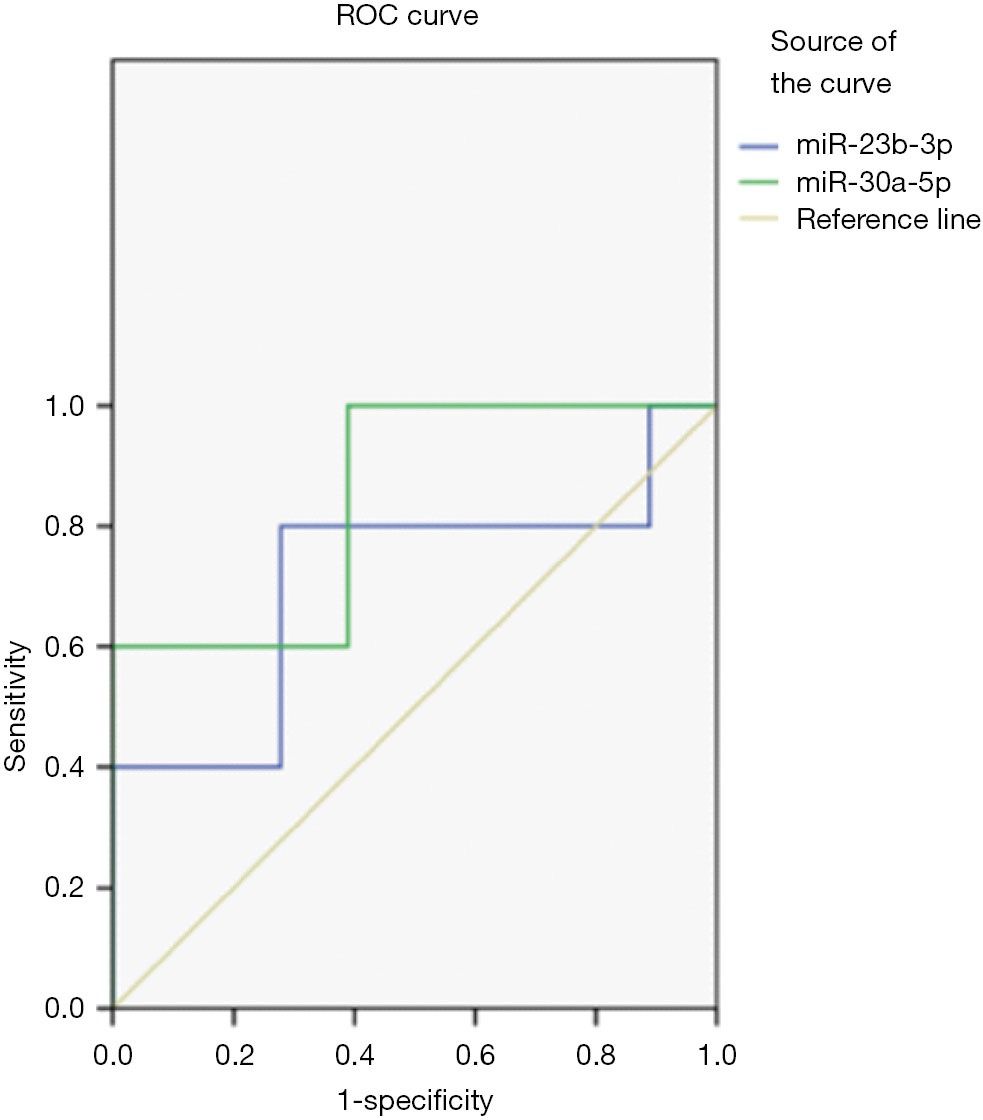 At present, the clinical diagnosis and monitoring of NS is mainly depended on renal biopsy. However, renal biopsy is a kind of traumatic examination, and children, due to their young age, can be fearful of the examination process, which in turn may affect the detection results (8). Therefore, it is of great significance for the diagnosis and treatment of NS to select non-invasive examination means to reflect the pathophysiological status of the kidney (9). Exosomes are a type of biologically active microvesicle secreted from cells, which can mediate the exchange of substances inside and outside of the cells (10). The exosomes in urine come from kidney tissue, the miRNAs in which are quite stable. The detection of miRNA in the exosomes can effectively reflect the kidney status of patients and evaluate the therapeutic effect. A variety of studies have shown that the expression level of miRNA is related to the pathological process of kidney disease, which may be a marker for the diagnosis of kidney disease. Lorenzen et al. (11) reported that the levels of miR-16 and miR-320 were downregulated in patients with acute kidney injury, while the level of miR-210 was significantly increased, and interpreted these as noninvasive molecular markers for monitoring the progression of kidney disease. Huang et al. (12) have confirmed that the expression level of urinary exosomal miRNA-193a is significantly increased in focal segmental glomerulosclerosis (SGS), which can assist in the diagnosis of the progression of SGS as a potential diagnostic marker for kidney disease.

However, the molecular mechanism underlying miRNA expression in kidney disease is still unclear. Some researchers have proposed that the pathogenesis of NS is related to immune disorders and changes of glomerular permeability, as well as the abnormal expression of miRNA, which can also damage kidney function. Ho et al. (14) have found that miR-23b-3p is expressed in podocytes, and the lack of miR-23b-3p can affect the integrity of the glomerular basement membrane and cause damage to the renal tubules. In addition, the signaling pathway mediated by miR-23b-3p can down-regulate the expression of target gene Hesl, thereby inhibiting the Notch signaling pathway in monocyte formation and participating in the process of glomerulopathy (15,16). In this study, the level of exosomal miR-23b-3p in children with NS was significantly higher than that in healthy children, which might because that the injury of glomerular podocytes in children with NS results in the upregulation of miR-23b-3p in urine exosomes. miR-30a-5p is also reported to be one of the miRNAs involved in the functional regulation of podocytes, which can affect the structure and function of podocytes by regulating the transcription factor (Xliml/Lhxl). After the lost of miR-30a-5p, injury of podocytes is aggravated and renal function is affected (17), which may be the reason for the changes in the level of urine exosome miR-30a-5p in children with NS in this study In this study, miR-151-3p could not be detected that is different to previous research results (18), which may be related to its lower expression level in the urine exosomes of children and the difference of detection methods. ROC curve analysis showed that urine exosomal miR-23b-3p and miR-30a-5p levels can distinguish NS children from healthy children. The AUC in both groups were over 0.5, indicating that miR-23b-3p and miR-30a -5p can be used as a potential molecular marker for NS diagnosis, which combined with conventional clinical indicators may improve the diagnostic efficiency of flat NS.

In summary, the levels of miR-23b-3p and miR-30a-5p in the urine exosomes of children with NS were significantly higher than those of healthy children, and their levels decreased significantly after treatment, indicating that miR-23b-3p and miR-30a-5p in urine exosomes are potential indicators for diagnosing the progress of NS and monitoring the effect of treatment. Due to the limitation of conditions, there are also some limitations that the sample size is small, and there is no further analysis of the influence of different urine exosome miRNA expression levels on NS treatment selection, which needs to be further studied and verified by further expanding the sample size.

Reporting Checklist: The authors have completed the STARD reporting checklist. Available at http://dx.doi.org/10.21037/tau-20-1260

Conflicts of Interest: All authors have completed the ICMJE uniform disclosure form (available at http://dx.doi.org/10.21037/tau-20-1260). The authors have no conflicts of interest to declare.

Ethical Statement: The authors are accountable for all aspects of the work in ensuring that questions related to the accuracy or integrity of any part of the work are appropriately investigated and resolved. The study was approved by the ethics committee of People’s Hospital of Ningbo University (approval ID: 2020-069). All the children’s family members signed the informed consent. All procedures performed in this study involving human participants were in accordance with the Declaration of Helsinki (as revised in 2013).