Urolithiasis is a common disease of the urinary system. The incidence of renal stones is around 10–20% (1) and is still rising through the changes of living habits and the increasing prevalence of related medical conditions, such as metabolic syndrome, obesity and diabetes mellitus. Renal stones may bring about a loss of renal function and increase the risk of papillary renal cell carcinoma (2). Therefore, it is necessary to actively manage stones to avoid adverse consequences.

In general, some combined diseases, such as diabetes, hypertension and repeated urinary tract infections (UTI), may affect renal function in the long run by changing the vascular structure and affecting local blood supply, causing local inflammation to change local metabolism (5-7). For patients with renal calculi, renal function can be improved after surgery in most cases, but whether there are some factors deteriorating the renal function of solitary kidney patients with staghorn calculi after PCNL is still unclear.

Taking into account this knowledge, we aim to evaluate the risk factors that deteriorate the renal function in solitary kidney patients with staghorn calculi after PCNL. These risk factors can be used to guide reasonable control in clinical works and to protect renal function after PCNL in solitary kidney patients with staghorn calculi. We present this article in accordance with the STROBE reporting checklist (available at http://dx.doi.org/10.21037/tau-20-916).

The present study was conducted with the approval and supervised by the ethics committee of West China Hospital [registration number 2018(182)]. The study has conformed to the provisions of the Declaration of Helsinki (as revised in 2013). Because of the retrospective nature of the research, the requirement for informed consent was waived.

Clinical data over a 5.5-year-period from March 2014 to June 2019 were recorded from consecutive solitary kidney patients with renal staghorn calculi who underwent PCNL. The preoperative medical records of the patients were closely followed and their renal functions were followed up in the first and sixth months after PCNL. Abdominal X-ray, abdominal computed tomography (CT), emission computed tomography and diuresis renography were used to evaluate the solitary kidney patients with renal staghorn calculi for inclusion into this study.

Definition of renal function and UTI

Serum creatinine (Scr) and estimated glomerular filtration rate (eGFR) were used to evaluate pre-operative and post-operative renal functions. Data of Scr and eGFR were obtained from the clinical reference range given by the clinical laboratory of the tested Hospital. The Scr reference interval was: males: 68–108 µmol/L (>18 years old); females: 48–79 µmol/L (18–60 years old) and 49–88 µmol/L (>60 years old). The eGFR reference interval was 56–122 mL/min/1.73 m2. Changes in Scr or eGFR greater than the normal range were considered to be significant. Since Scr is easily affected by factors such as eating, we evaluated the changes of renal function by integrating the changing trends of the two indexes, so as to avoid the occurrence of evaluation errors. These two indicators were used only to assess whether the patient’s renal function had deteriorated.

According to the reference standard of the medical laboratory of the tested Hospital, UTI is considered as white blood cell count in the urine >5/HP, number of bacteria >230/µL, positive nitrite, positive pus cells, and positive urine culture or obvious clinical symptoms of infection.

The skin to calyx approach was obtained by gradual dilation of metal dilators to Fr 18. Lithotripsy of staghorn calculi was performed by one surgeon using a Swiss lithoclast (EMS Electro Medical System, Nyon, Switzerland). Considering the comprehensiveness of staghorn calculi, we inserted one Fr 14 nephrostomy tube and one Fr 4.7–6 double J stent into each patient and extracted them on 5 days to 2 weeks postoperatively (8).

Data was recorded on an excel spreadsheet (Microsoft) and all statistical analyses were undertaken using IBM SPSS Statistics 22.0. Means were compared using t-test and one-way analysis of variance (ANOVA). The univariate and multivariate binary logistics regression analysis were used to analyze the risk factors. A two-sided P<0.05 was considered to be statistically significant. 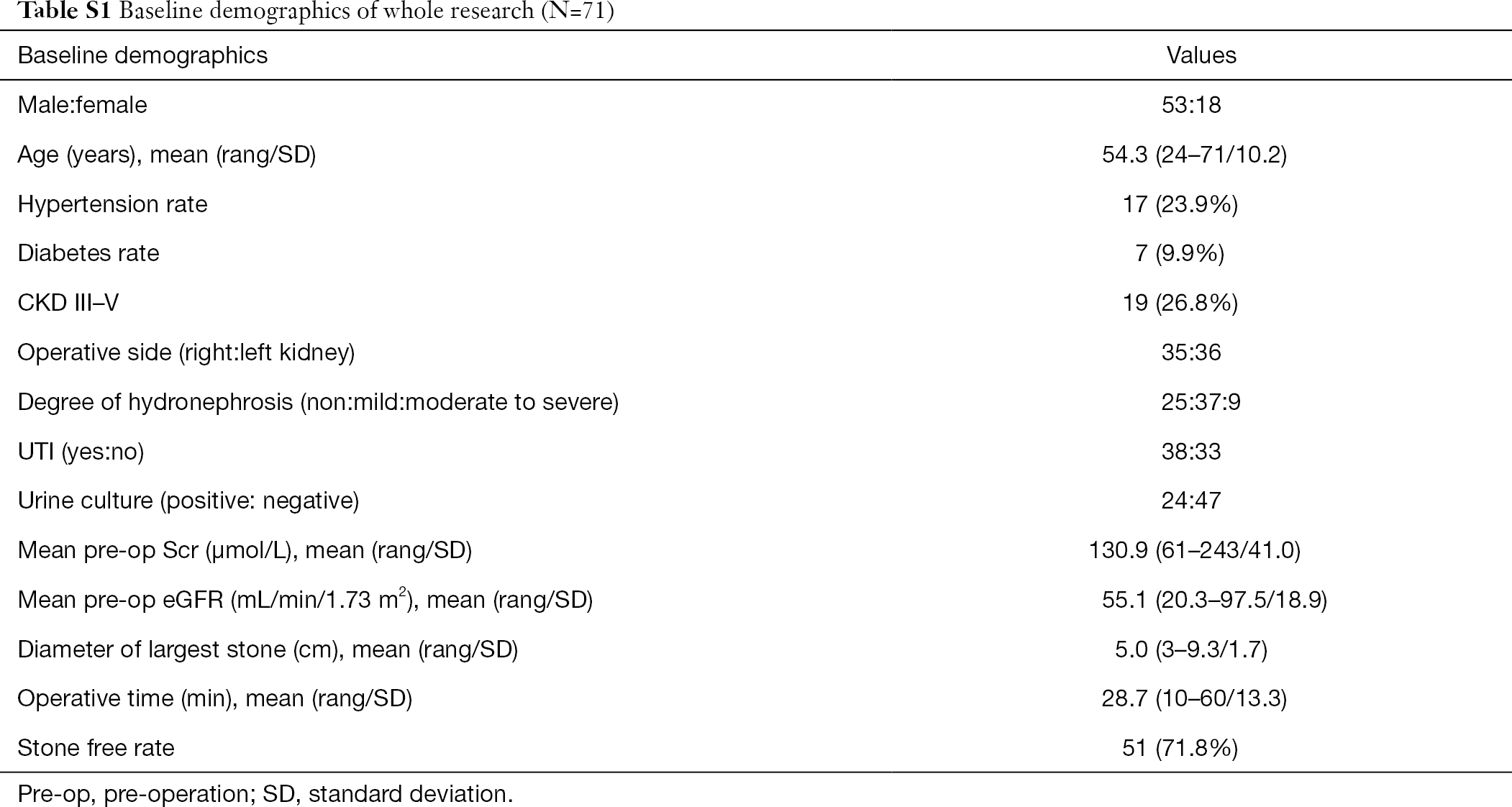 The mean eGFR and Scr levels characteristic of all subjects under different risk factors are shown in Table 1. The differences of renal function among pre-op, one-month after PCNL and 6 months after PCNL were analyzed by paired-samples t-test. At 1 month after PCNL, the Scr level and eGFR of UTI(+) patients accompanied by urine culture (+) showed the most significant changes (P<0.01, 95% CI: −25 to −10.2), and both indexes reflected a gradual deterioration of renal function. Using ANOVA, the mean value of the difference between per-op and 1 month after PCNL in both Scr (P=0.004) (Figure 1A) and eGFR (P=0.018) (Figure 1B) were statistical significance, showing the trend of deterioration of renal function. At 6 months after PCNL, eGFR significantly decreased in patients with diabetes (P=0.037, 95% CI: 0.3–4.3). Meanwhile, eGFR also significantly declined at the operation time within 20 min (P=0.029, 95% CI: 0.1–1.4) and beyond 40 min (P=0.029, 95% CI: 0.1–1.4). Interestingly, in patients undergoing PCNL on the right side after 6 months, renal function reflected by Scr level or eGFR significantly deteriorated. Although the effect of hydrops on Scr level or eGFR was not significant, there was still a tendency to deteriorate renal function. 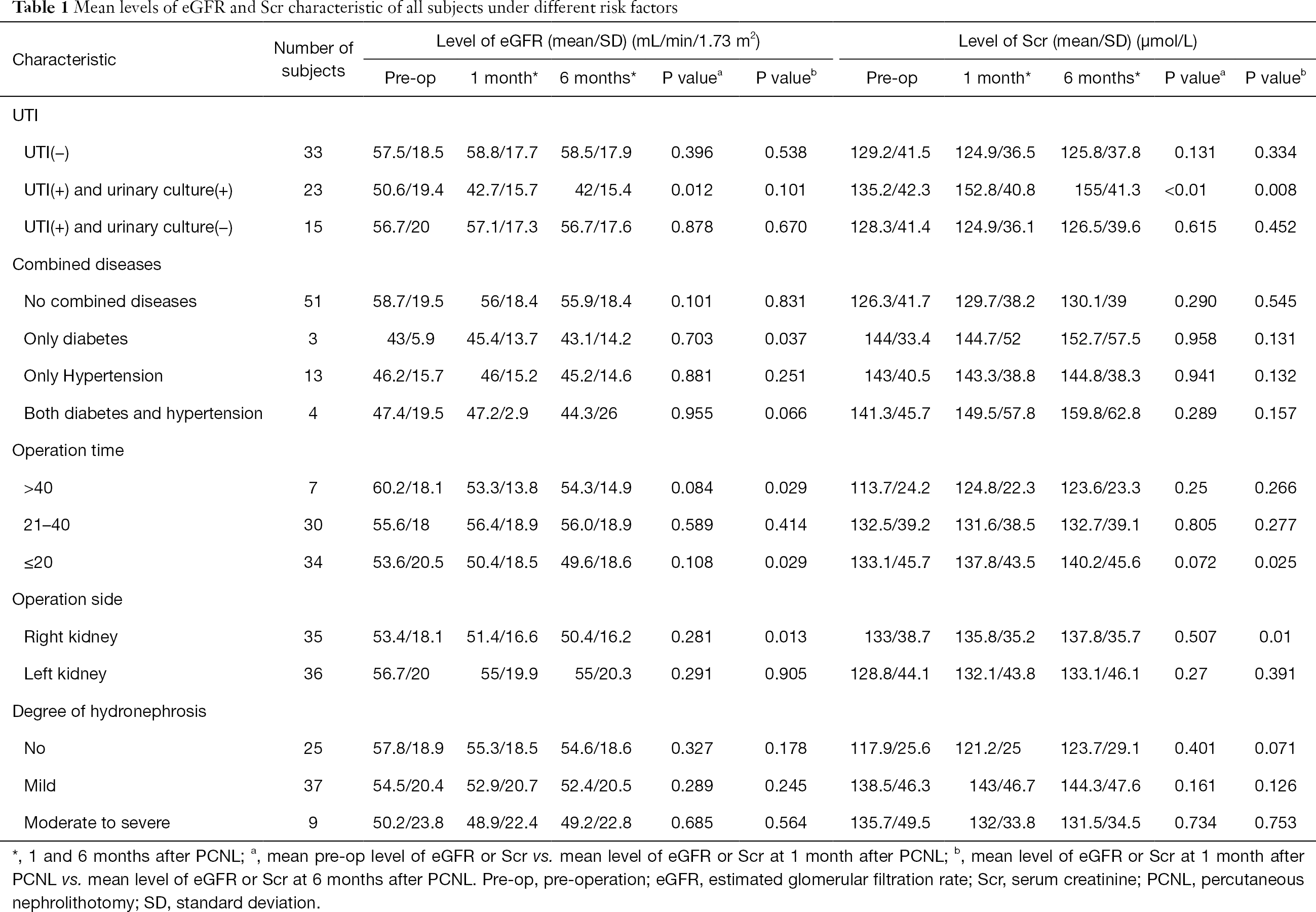 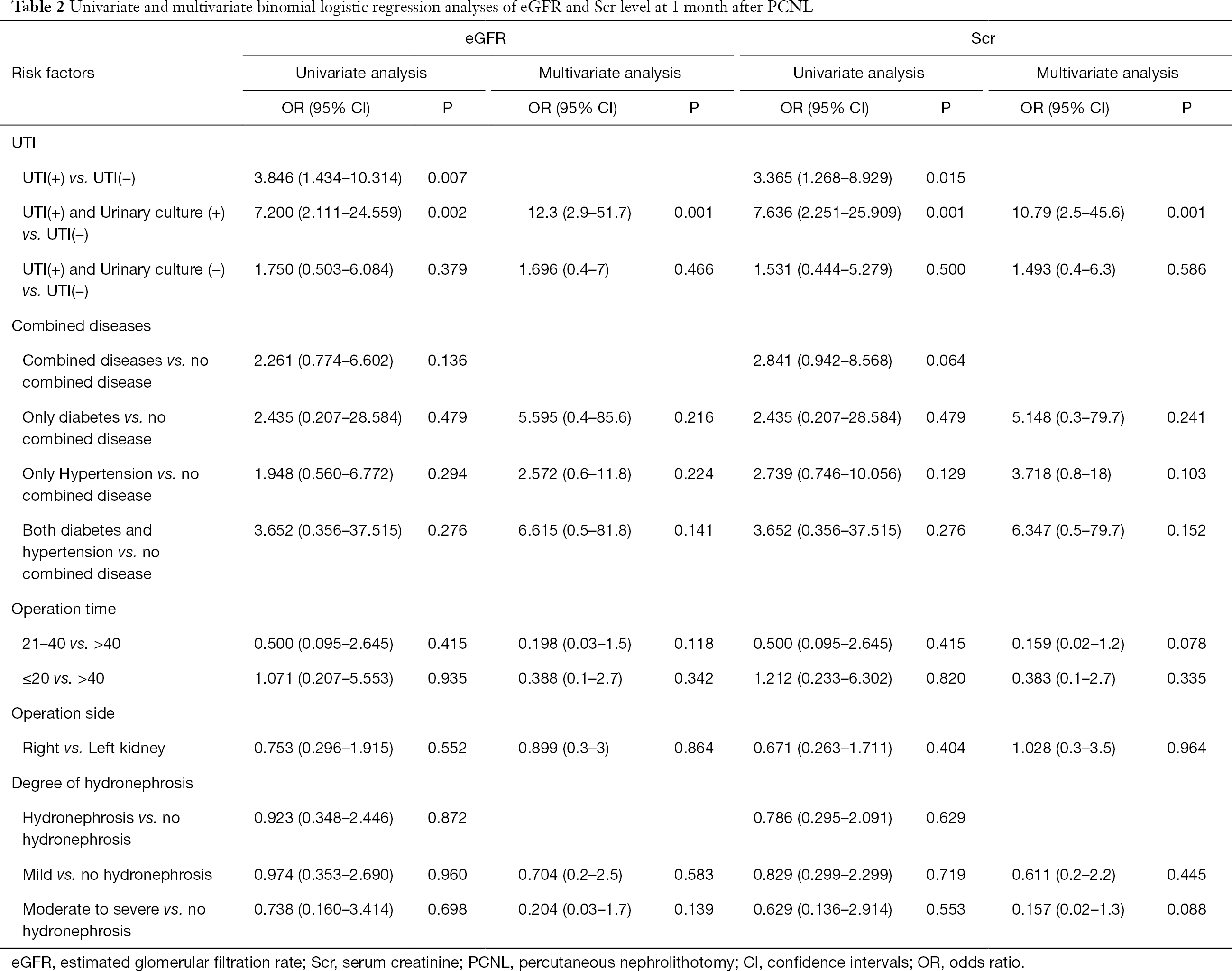 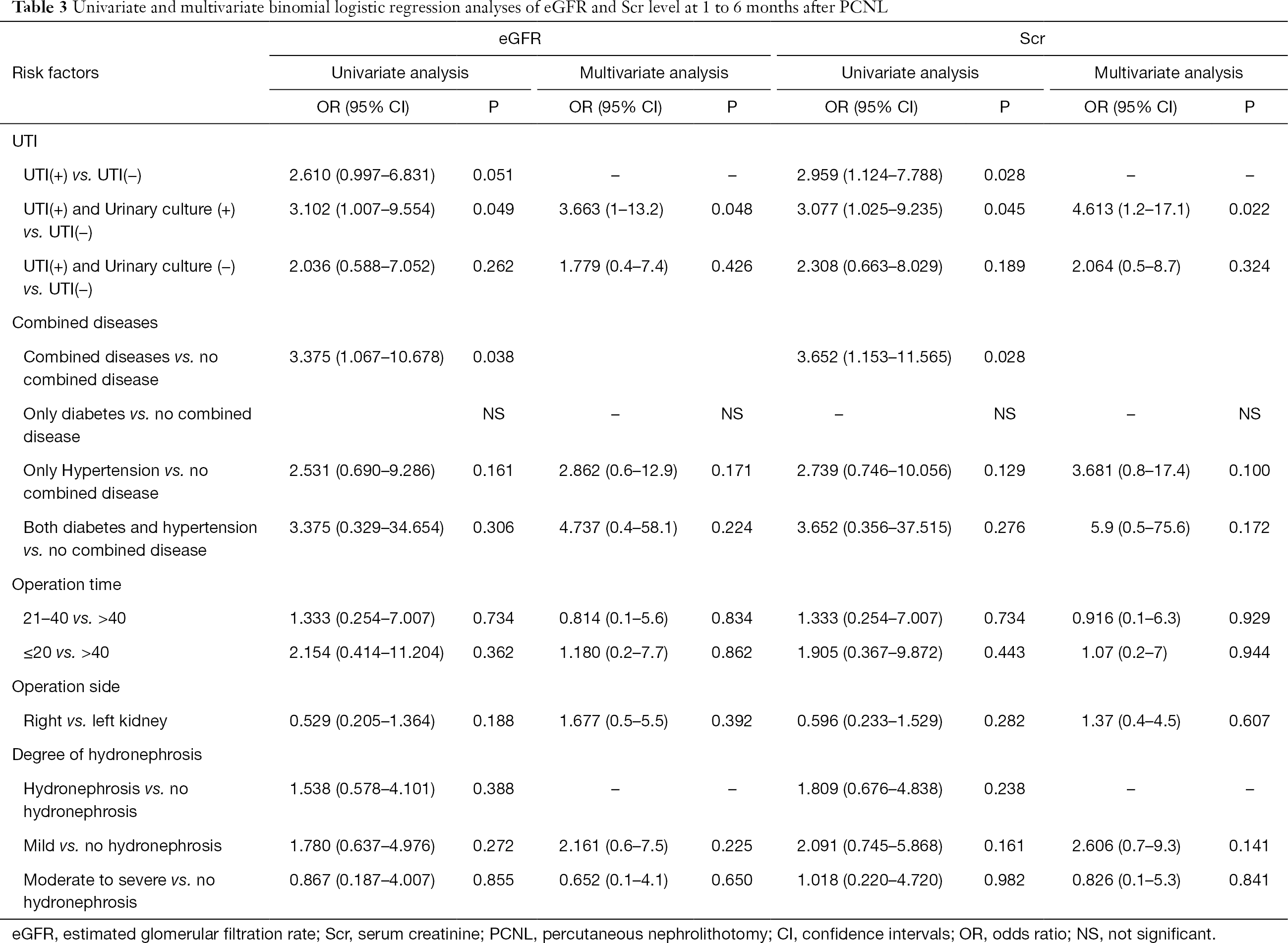 Urinary calculi are often accompanied by UTI, which can lead to local symptoms such as frequent and urgent urination, and the combination with severe UTI even can cause urogenic sepsis. It is well-known that local inflammation and infection are not conducive to wound repair (9,10). We found UTI deteriorated the renal function at 1 month after PCNL. As an invasive operation, PCNL will inevitably cause local bleeding, and upon operative area infection, bacteria can enter the bloodstream from these damaged wounds and cause local inflammation. Local accumulation of numerous inflammatory factors and other inflammatory components can cause abnormal glucose and lipid metabolism in local tissues, affecting local blood circulation and interfering wound repair (9,10). At the same time, the internal and external toxins secreted by bacteria and the persistent damage caused by the bacterial capsule, if not removed in time, will form a vicious circle with a strong inflammatory response. The use of antibiotics to reasonably and effectively control infection can also be beneficial to the healing of local injury. Thus, reasonable control of UTI and local or even systemic inflammation before surgery is crucial to the protection of renal function among solitary kidney patients within 1 month after surgery. Diabetes and hypertension are common chronic diseases nowadays, which can lead to small vessel sclerosis and other lesions. Diabetes can cause peripheral nerve injury, reduce the release of neurotrophic factor, and sclerose local small vessel, leading to abnormal blood supply and interfering tissue repair (11,12). Our study shows that combined diseases tend to deteriorate renal function after PCNL, even though the result is not significant. For the renal function at 6 months after PCNL, we found diabetes significantly deteriorated renal function, which may be related to impaired vascular function. Reasonable control of blood glucose level before and after surgery plays an important role in postoperative injury repair, so as to protect the renal function of patients. Interestingly, we found a reduction in post-operative renal function at 6 months in the operation time within 20 min. It may be related to delayed hemorrhage to some degree. Admittedly, for these patients keeping their own lifestyle for long period, we cannot rule out that the intake of some substances unconducive to renal function or some combined diseases cause a deterioration of renal function. The group of operation duration beyond 40 min showed a tendency of renal function deterioration at 1 month after PCNL, and the main reasons can be long-time bleeding and exposure to infectious situation. The operation duration is neither as long nor as short as possible. Reasonable duration is very important for any operation. Strict control of operation time is conducive to shortening the duration of intraoperative bleeding and thus reducing the duration of continuous exposure to infectious factors and probable postoperative infection. With preoperative reasonable control of infection, PCNL after verification and confirmation of infection control may be relatively safe and reliable for solitary kidney patients, and postoperative infection management also need to be considered. It is still worth further discussion whether the patients with some combined diseases such as diabetes should receive surgery after effective and reasonable control of blood glucose level, otherwise they are not suitable for PCNL.

Due to the small number of solitary kidney patients receiving PCNL, and the decline in the number of staghorn calculus patients with the popularization of physical examination, there may be some potential deficiencies in this study.

UTI and combined diseases such as diabetes are the main factors deteriorating the postoperative renal function of patients. The operation duration, degree of hydronephrosis, and surgical side may also deteriorate renal function after surgery. Reasonable and effective preoperative preparation (e.g., infection control, treatment of combined diseases) and long-term postoperative follow-up play an important role in improving and protecting renal function after PCNL in solitary kidney patients with staghorn calculi.

Funding: This work was financed by grants from the 1.3.5 Project for Disiplines of Excellence, West China Hospital, Sichuan University (ZY2016104 and ZYGD18011) and Department of Science and Technology of Sichuan Province (2018SZ0168).

Reporting Checklist: The authors have completed the STROBE reporting checklist. Available at http://dx.doi.org/10.21037/tau-20-916

Conflicts of Interest: All authors have completed the ICMJE uniform disclosure form (available at http://dx.doi.org/10.21037/tau-20-916). The authors have no conflicts of interest to declare.

Ethical Statement: The authors are accountable for all aspects of the work in ensuring that questions related to the accuracy or integrity of any part of the work are appropriately investigated and resolved. The present study was conducted with the approval and supervised by the ethics committee of West China Hospital [registration number 2018(182)]. The study has conformed to the provisions of the Declaration of Helsinki (as revised in 2013). Because of the retrospective nature of the research, the requirement for informed consent was waived.