Reaction of HIV screening test for a renal cancer patient confirmed to be uninfected with HIV virus: a case report

According to the third edition of National Guideline for Detection of HIV/AIDS (2015 edition) in China, diagnosis of HIV infection and AIDS need to rely on HIV antibody or HIV antigen test, and the test process is divided into preliminary screening test and confirmatory test. The preliminary screening test generally uses electrochemiluminescence (ECL), ELISA, immunofluorescence and immune colloidal gold technique, while the confirmatory test usually uses western blotting. The HIV/AIDS screening laboratory of the First Affiliated Hospital of Nanjing Medical University has been using ECL to screen the patients. The HIV screening tests carried out by this patient several times in our hospital within 1 year showed reactivity, but the result of the confirmatory tests was negative all the time. This rare phenomenon in clinic is reported as follows.

A 50-year-old Asia man with his contrast-enhanced computed tomography (CT) scan revealing two soft tissue density images were seen in the left kidney came to our hospital for medical treatment, and the tissues’ sizes were 7.8 cm ×8.1 cm ×7.0 cm and 1.5 cm ×1.3 cm, respectively since January 2018 (Figure 1). A large space-occupying lesion of the upper pole of the left kidney, possible renal carcinoma involving the tail of the pancreas, possibility of adjacent peritoneum metastasis. On admission, his physical examination and laboratory data were unremarkable. The patient reported an unremarkable medical, surgical, family history and no history of autoimmune diseases, blood diseases, infectious diseases or blood transfusion. 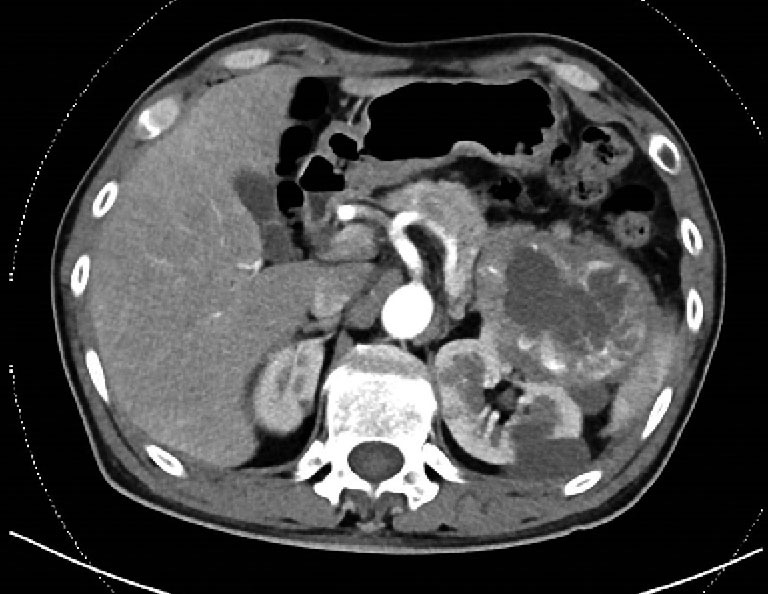 The preoperative examination showed that the patient’s serum HIV COI value was 1.37, and the result was reactive according to the instruction of the HIV Combi PT of Roche Diagnostics GmbH. On the basis of the third edition of National Guideline for Detection of HIV/AIDS, the HIV/AIDS screening laboratory of our hospital tested the sample again. And the HIV COI value was 1.33, meaning it is reactive. Then the primary screening laboratory needs to use different methods of principle or reagents from different manufacturers for the third test. The third test using colloidal gold of Intec Products Incorporation showed nonreactive. The preliminary screening results meet the requirements of further confirmatory experiments. After confirmation of the patient’s identity, another specimen was collected from the patient. Finally, we sent the two samples to Nanjing Municipal Center for Disease Control and Prevention (Nanjing CDC) for the west blotting. The MP Diagnostics (MPD) HIV BLOT 2.2 has been adopted by Nanjing CDC. While waiting for the result of the confirmatory test, the patient decided to leave hospital temporarily. At last the outcome from Nanjing CDC is negative (Table 1).

Therefore, we immediately informed the patient of the final result. The patient was admitted to hospital for surgical treatment. Surprisingly, according to regular procedure, the preoperative examination showed that the patient’s third serum HIV COI value was 1.41. It meant that the patient still had the risk of contracting AIDS. Then the sample was tested successively by the HIV Combi PT of Roche Diagnostics GmbH and the colloidal gold of Intec Products Incorporation. The results were separately 1.36 and nonreactive. Subsequently, the fourth blood sample was collected from the patient the same day. Finally, the both blood samples were sent to Nanjing CDC again. This time we chose to take the risk of being infected to operate on this patient who may be infected with AIDS. The robot-assisted laparoscopic radical nephrectomy of left renal was carried out, and pathological examination revealed (left kidney) renal clear cell carcinoma, Grade II, T2bM0N0; Mass 4, size: 0.5–7.5 cm × 7.5 cm × 7 cm, focal cystic changes in the tumor; no cancerous involvement in the renal pelvis. There are more than 10 simple renal cysts in the surrounding renal tissues, size: 0.2–0.7 cm. The cancerous tissue did not break through the renal capsule (Figure 2). After several days, the outcome from Nanjing CDC was still negative. The patient tolerated the procedure well and there were no adverse or unanticipated events (Figure 3). 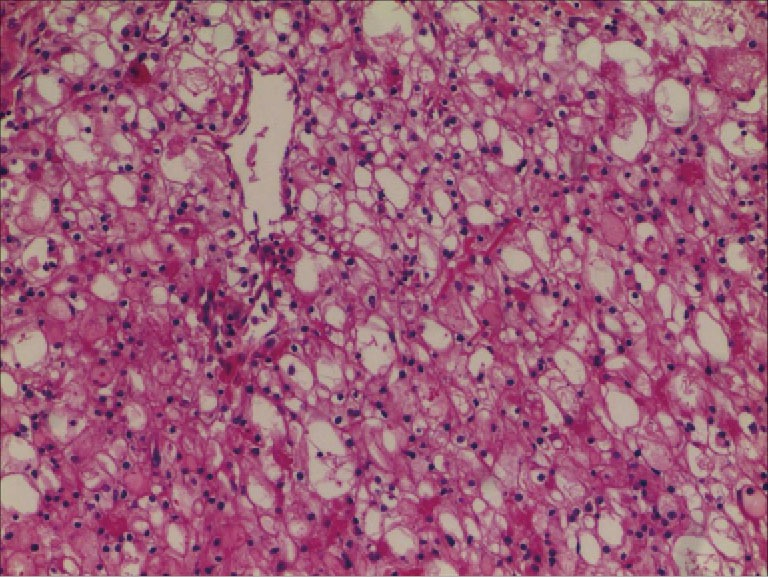 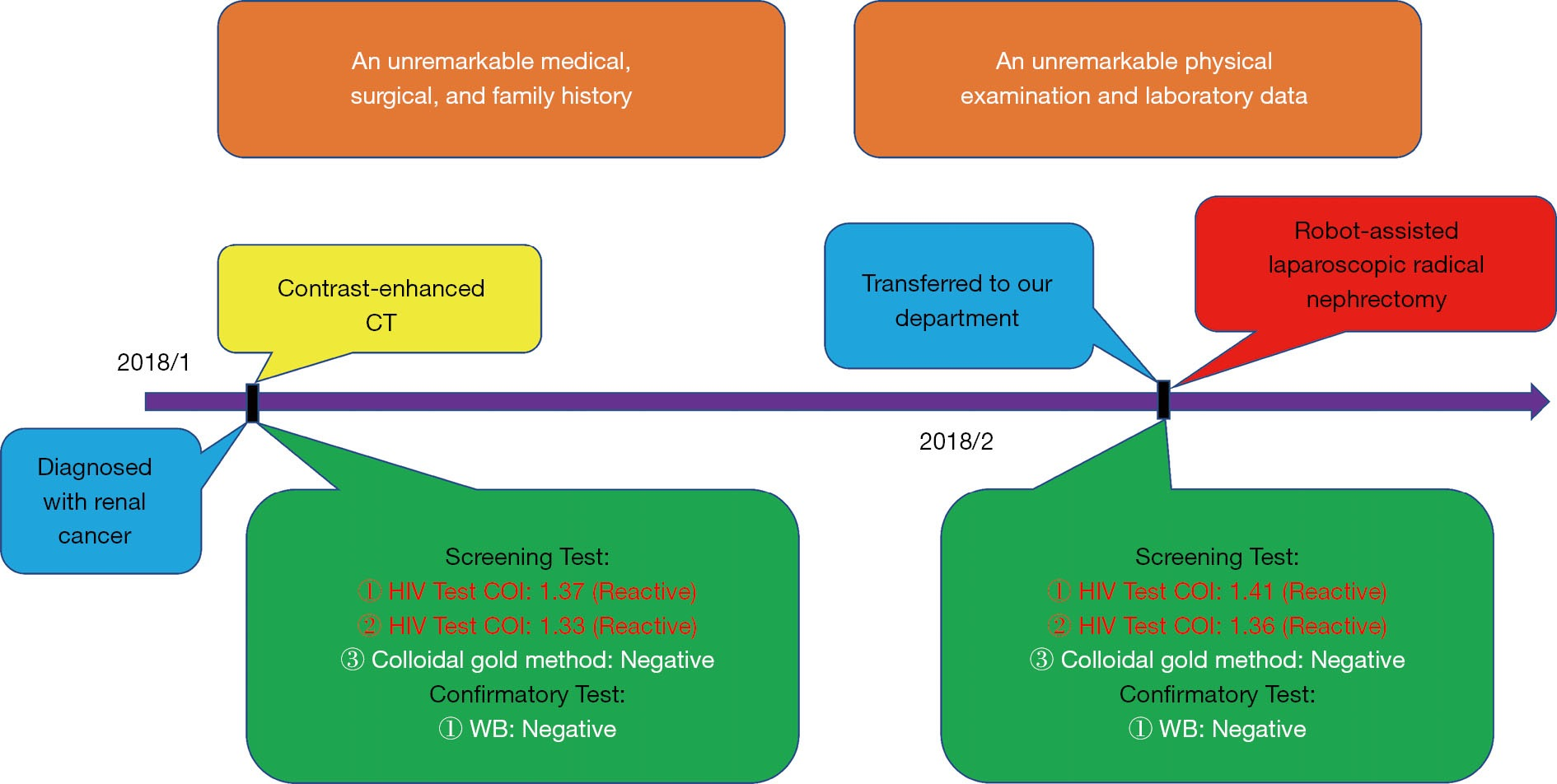 Figure 3 The timeline of the disease course. CT, computed tomography.

HIV infection has evolved from a highly lethal disease to a chronic illness commonly managed in the primary care setting. False positive HIV results has been reported in a myriad of different settings-schistosomiasis, systemic lupus erythematosus, influenza vaccination. The patient proved HIV-negative twice by the confirmatory tests of Nanjing CDC. But all the results of the HIV Combi PT were reactive indeed. To our knowledge, there must be some substances that can react with the HIV Combi PT in this patient. The following are some possible causes of this phenomenon.

It has been reported that a female patient with severe malaria has a false positive HIV result, whose HIV screening test was positive and the confirmatory test were all negative. After medical treatment, her condition improved and the HIV screening tests reverted to negative (7). We planned to recommend the renal cancer patient to perform HIV screening tests and CT scans, however, we failed to follow up the patient regularly because of poor patient compliance. Hence, we did not know whether the results of postoperative examination reverted to negative. When clinicians encounter such problems, confirmatory tests should be conducted as soon as possible in strict accordance with the guidelines in order to avoid misdiagnosis.

Reporting Checklist: The authors have completed the CARE reporting checklist. Available at http://dx.doi.org/10.21037/tau-20-905

Conflicts of Interest: All authors have completed the ICMJE uniform disclosure form (available at http://dx.doi.org/10.21037/tau-20-905). The authors have no conflicts of interest to declare.