Kidney transplantation remains the optimal option for patients with end stage renal disease (ESRD) with significant promotion of life quality (1). Great progress has been made in the short-term post-transplant graft survival with the administration of potent immunosuppressants. However, the long-term survival remains suboptimal (2). There have been studies discovered that the occurrence of acute rejection (AR) is associated with the acceleration of long-term renal graft failure (3). In the past three decades, TCMR has been recognized as the major category of AR (4,5) and was attenuated by some classical therapy including induction immunosuppressive therapy (6,7). Nevertheless, the more effective therapy against TCMR is still an interesting problem to be explored (8).

The pathogenesis of acute TCMR is caused by cytotoxic T lymphocytes, activation macrophages as well as NK cell-mediated cytotoxic immune damage. The essence is the activation of T cells under isoantigenic stimulation, IL-2 production and proliferation of allergenic T cells. In addition, IL-2 plays an essential role in the transplantation immune regulation and responds T-cell immune response by activating T cells and promoting the production of cytokines. Studies have revealed that co-stimulatory and co-inhibitory receptors associated with T cell activation and proliferation, which is considered as an important mechanism during the process of TCMR (9), are recognized to influence the graft rejection and survival in organ transplantation (10,11). The BTLA is a recently identified CD28 family member and expressed on the majority of lymphocytes (12,13). A research has reported that exciting anti-BTLA mAb inhibited AR in mice heart transplant model (14). Furthermore, our previous work suggested the BTLA pathway was involved in pathogenesis of AR after kidney transplantation in biopsy-proven patients (15). On the other hand, another co-signaling molecule CTLA-4 blocks CD28 binding with its ligands and prolong long-term allograft survival in several transplantation models (16,17). Belatacept as a high-affinity variant of CTLA-4 Ig, has been applied into kidney transplantation to against AR (18). However, several studies have revealed that Belatacept is associated with a high incidence of AR compared to traditional calcineurin inhibitors therapy, suggesting that blocking CTLA-4-CD80-86 interactions might be limited (19).

Based on this, we hypothesized that the synergism between BTLA and CTLA-4 may inhibit AR by regulating T cell activation. In this paper, we examined the T cell activation and proliferation by mixed lymphocyte reaction (MLR) with BTLA-overexpressed adenovirus and Belatacept, as well as established rat kidney transplantation model, and then analyzed the postoperative pathology to investigate the role of combined BTLA and CTLA-4 in AR following transplantation. We present the following article in accordance with the ARRIVE reporting checklist (available at http://dx.doi.org/10.21037/tau-20-728).

The MHC mismatched SD and Wistar rats (Male, 200–250 g) (Charles River Laboratory, Beijing, China) were reared in Nanjing Medical University Animal Center with water and normal diet. All animal experiments were approved by the Animal Care and Use Committee of Nanjing Medical University (Ethical Approval Number: IACUC1601140-1), in compliance with ethical guidelines of Nanjing Medical University animal ethical and welfare committee for the care and use of animals. Rat kidney transplantation model were established by two experienced microsurgeons according to the techniques described previously (21). The left kidney of syngeneic or allogeneic donor was chipped and positioned on the left side of the SD recipient with kidneys removed. Five rats of each group were harvested to collect kidney tissues and peripheral blood on day 3 and day 7 following surgery. The day 0 samples were collected from the normal SD rats. To observe the graft function and survival, six recipients of each group were enrolled in and the end survival of grafts was defined as anuria (22).

AR model was established by transplanting Wistar donor kidney to SD rat. AR recipients were assigned randomly to five groups: (I) the Allo group without intervene; (II) the Allo + Con group with pre-treated negative-control-vector and normal saline 10 mg/kg daily post-transplant; (III) the Allo + BTLA group, the SD recipient was injected with the BTLA-overexpression adenovirus 48 h before transplantation; (IV) the Allo + CTLA-4 group, Belatacept was administrated subcutaneously at dose of 60 mg/kg/per day at 0 day (day 0) and 4 days (day 4) after kidney transplantation; (V) the Allo + BTLA + CTLA-4 group with BTLA-overexpression adenovirus pretreated and Belatacept administrated. Among the syngeneic (Syn) group, surgery was performed between the SD rat donor and SD rat recipient. The graft function of rat recipients was analyzed by measuring the serum creatinine level (SCr) making use of the Creatinine Kit (Jiancheng BI, Nanjing, China) at each time point (day 0 to day 14).

The renal graft tissues were fixed in 10% formalin solution and then paraffin embedded. The tissues were sectioned at 4 µm and stained with hematoxylin and eosin (HE) according to standard protocols. T cell mediated rejection was evaluated in a two-blinded manner based on the Banff 2017 score. Based on previous work, the severity of AR was assessed semi-quantitatively with a score value of 0= normal, 1= borderline change, 2= IA, 3= IB, 4= IIA, 5= IIB, and 6= III (23,24).

Immunohistochemical staining was made to measure the expression of CD3 in graft sections as previously described (25,26). The CD3 antibody (CST, Inc., USA) as well as secondary antibody was used. We captured randomly 8 images under high-power field from each specimen, then used the integrated optical density (IOD) value calculated by Image Pro Plus 5.0 software (Media Cybernetics MD, USA) to express the relative quantity.

ELISA was operated by specific kits (Cusabio, Wuhan, China) to determine IL-2 concentrations in supernatants of MLR (n=3 each group) and recipient serum 100 µL at day 7 following renal transplant (n=5, each group). All procedure was performed strictly according to the manufacturer’s protocols. 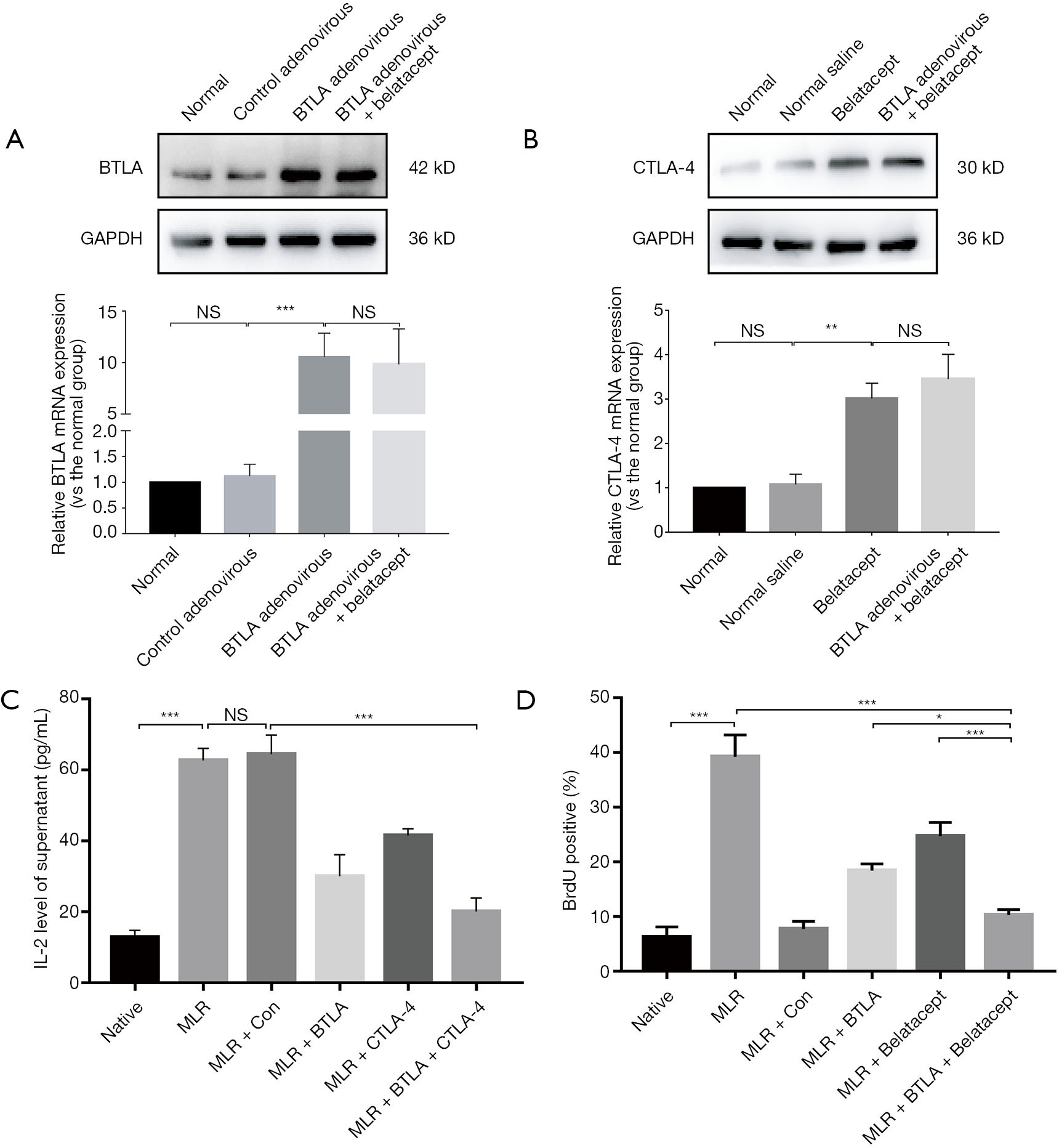 To observe the activation of T cell, we examined the IL-2 level by ELISA and found that the supernatant IL-2 level rose in the MLR and the MLR + Con group compared to the naive T cell after stimulation (Figure 1C). Additionally, the secretion of IL-2 reduced significantly in the MLR + BTLA, MLR + CTLA-4 group and especially in the MLR + BTLA + CTLA4 group. By BrdU flow analysis (Figure 1D), a prominently decreased percentage of positive stained cells was showed in the MLR + BTLA + CTLA-4 group compared with the MLR + Con group, suggesting that combined overexpressed BTLA and CTLA-4 could inhibit T cell proliferation of MLR in vitro effectively.

Establishment of the AR model after kidney transplantation

We established the rat kidney transplant model (n=5 for each group) to show the process of AR. Figure 2A shown ischemia reperfusion injury as well as renal tubule edema without graft rejection were observed at day 3 and day 7 after transplantation in the Syn group. By the contrast, serious renal tubular injury, interstitium monocyte infiltration and intimal arteritis were found at day 3, especially at day 7 in the Allo group. The pathological classification according to the Banff 2017 score revealed the occurrence of AR at day 3 and day 7 after transplantation (Figure 2B). 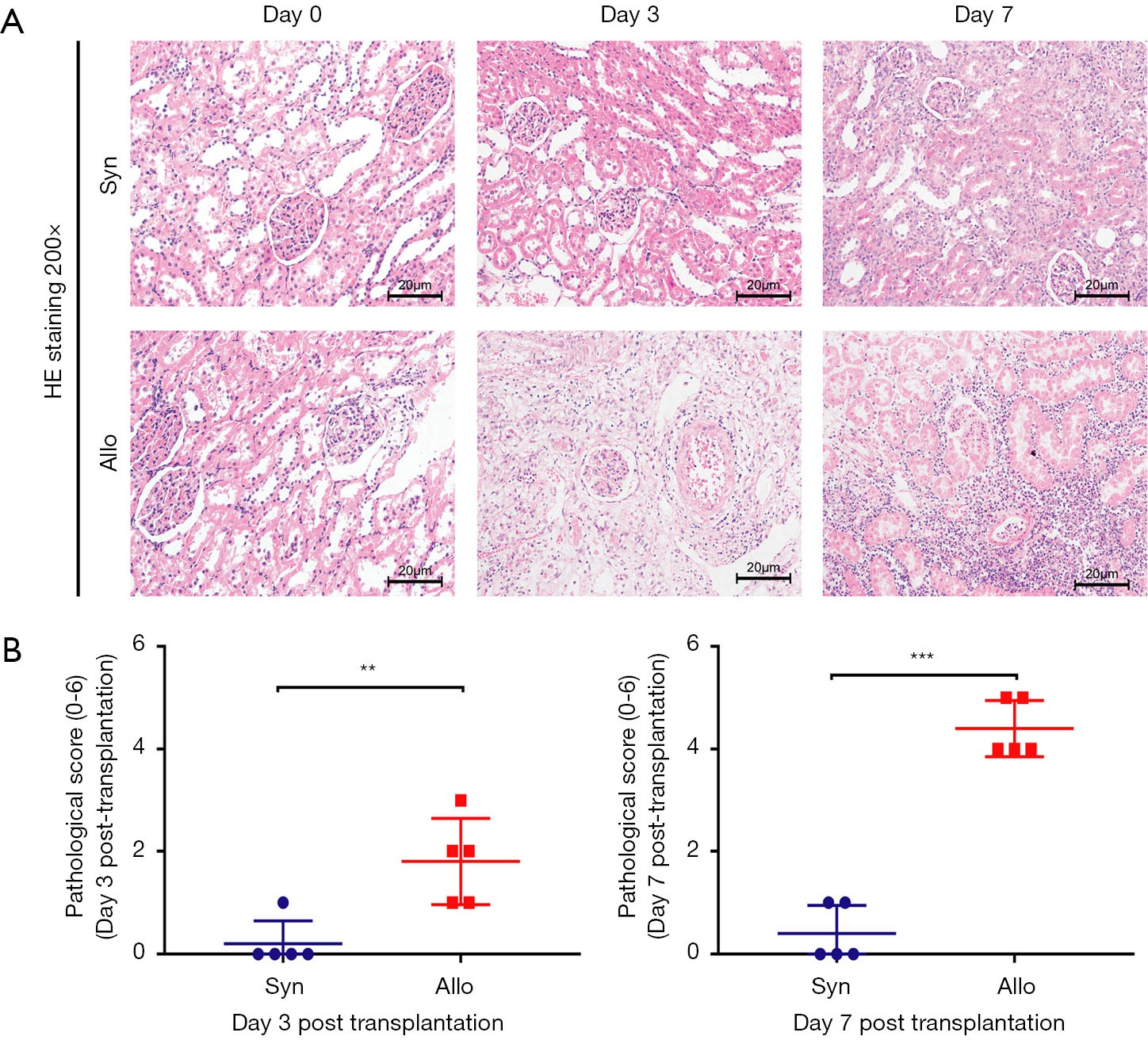 Figure 2 Establishment of the rat acute rejection of kidney transplantation model. (A) HE analysis of the histological features of graft tissue between the Syn and the Allo groups at Day 0, 3 and 7 following transplantation (magnification: 200×). (B) Semi-quantitative assessment of graft sections among the Syn and the Allo group based on the Banff 2017 classification at day 3 and 7 after kidney transplantation (n=5 for each time point and each group). Data are expressed as the means ± SD. **, P<0.01; ***, P<0.001. 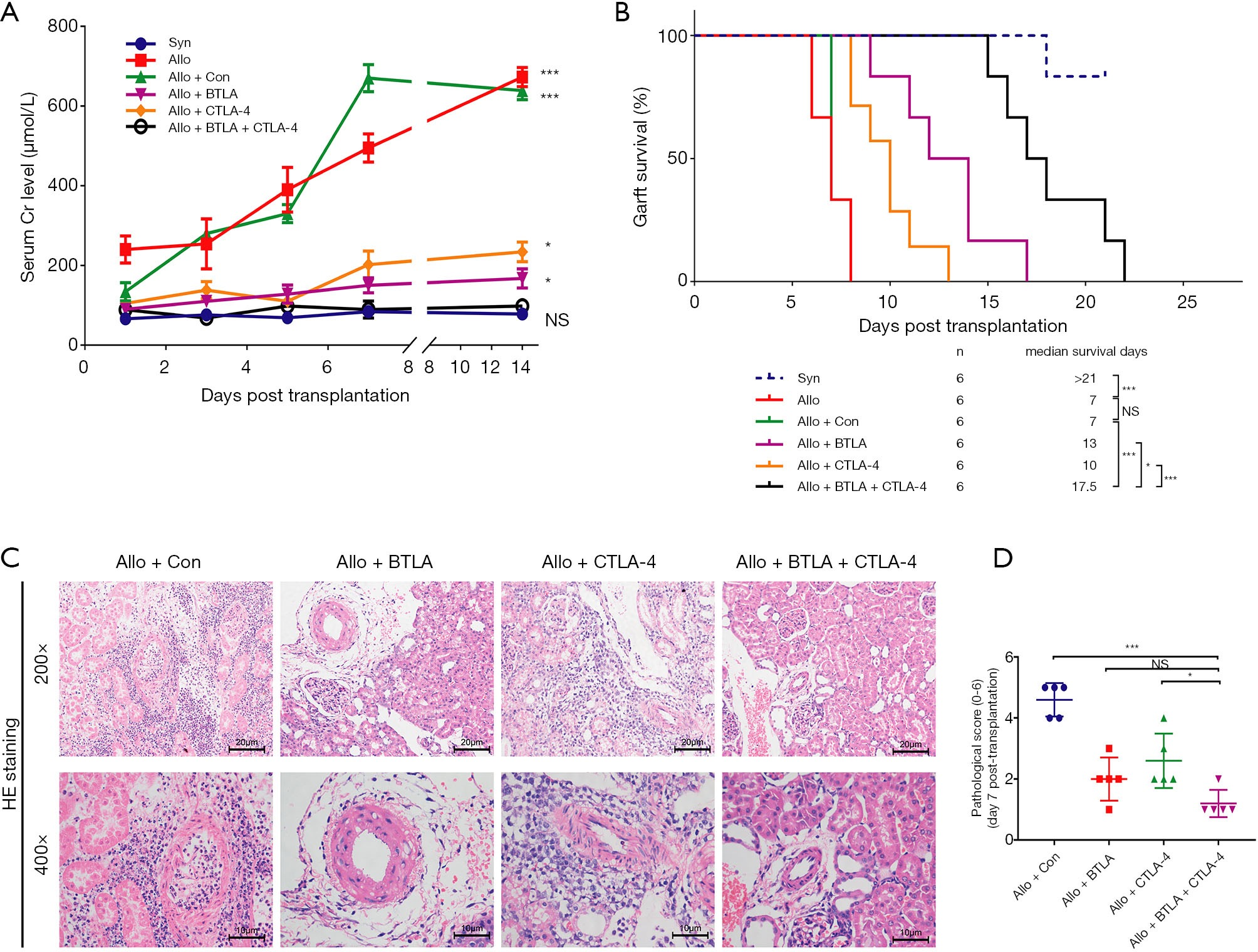 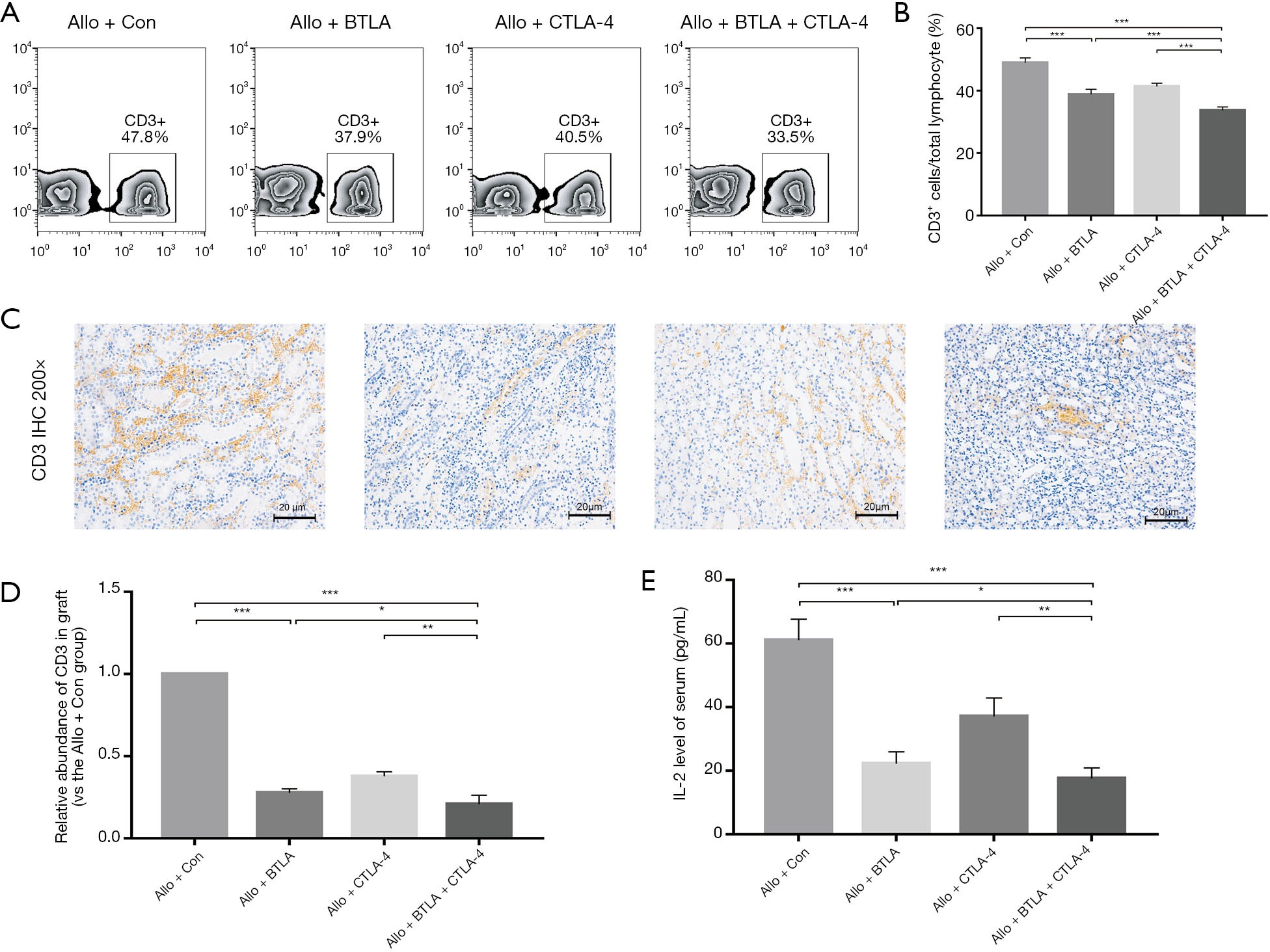 Figure 4 Combined overexpressed BTLA and CTLA-4 reduced the numbers of T cell in peripheral blood and graft and down-regulated serum IL-2 level. (A) Flow cytometry analysis of CD3+ T cells in peripheral blood cells of SD recipients at day 7 after transplantation among the four groups. (B) The percentage of CD3+ cells in total lymphocyte in peripheral blood. (C) Postoperative CD3 expression of kidney grafts by IHC among the four groups (magnification: 200×). (D) Integrated optical density (IOD) value used to express the relative quantity of CD3. (E) Secretion of cytokines IL-2 in the serum of SD recipients was measured by ELISA. Data are presented as the means ± SD. *, P<0.05; **, P<0.01; ***, P<0.001. NS, not significant.

The data obtained from MLR showed overexpressed BTLA and CTLA-4 inhibited production of IL-2 and proliferation of T cells in vitro and more effectively than single overexpressed BTLA or CTLA-4. The secretion of IL-2 presents a marker of the T cells activation (32) and is considered essential for T cells proliferation (33). These results shed light to inhibitory effect of combined BTLA and CTLA-4 in activation and proliferation of T cells. Then we successfully established the rat graft AR model, in which typical interstitium monocyte infiltration and intimal arteritis were observed in the kidney graft on 3 and 7 days after transplantation. Based on the Banff score, the representations of acute TCMR were more serve critical at day 7 compared to day 3 post-transplant, suggesting a successful TCMR model was established.

We demonstrate that combined BTLA and CTLA-4 were capable of suppressing T cell activation in vitro. Subsequently, we providence that the synergism of BTLA and CTLA-4 attenuated acute TCMR after kidney transplantation in rat model, which contributes to the improvement of function and survival in kidney graft. Our research suggests new combined therapeutic opportunities, more effective than single-agent therapy, for co-signaling factors in the prevention of TCMR in kidney transplantation.

Reporting Checklist: The authors have completed the ARRIVE reporting checklist. Available at http://dx.doi.org/10.21037/tau-20-728

Conflicts of Interest: All authors have completed the ICMJE uniform disclosure form (available at http://dx.doi.org/10.21037/tau-20-728). The authors have no conflicts of interest to declare.

Ethical Statement: The authors are accountable for all aspects of the work in ensuring that questions related to the accuracy or integrity of any part of the work are appropriately investigated and resolved. All animal experiments were approved by the Animal Care and Use Committee of Nanjing Medical University (ethical approval Number: IACUC1601140-1), in compliance with ethical guidelines of Nanjing Medical University animal ethical and welfare committee for the care and use of animals.