Clear cell renal cell carcinoma (ccRCC) is the most common type of kidney malignancy tumor, representing about 80% of all primary malignant kidney tumors (1-5). In most cases, ccRCC is resistant to radiation, cytotoxic and hormone therapies, and surgery is the main treatment for ccRCC (5,6). 60% ccRCC patients die in the first 2–3 years, and 30% of ccRCC patients diagnosed with metastases (2). Therefore, searching for new sensitive biomarkers are important for early diagnosis of ccRCC.

PRAS40 also known as AKT1S1 (AKT serine/threonine kinase 1 substrate 1) was initially identified as a 14-3-3 binding protein (7). PRAS40 has two proline-enriched stretches at the N-terminal region (8). PRAS40 dynamically shifts between the nucleus and the cytoplasm. In the nucleus, PRAS40 forms a nuclear-specific complex with PRL11 (ribosomal protein L11) and contributes to senescence and radio resistance (9). In the cytoplasm, PRAS40 is an important interacting partner of mTORC1 (the mechanistic target of rapamycin complex 1) and negatively regulates mTORC1 signaling (10,11). PRAS40 is a substrate of Akt and mediates the PI3K (phosphatidylinositol 3-kinase)/Akt signaling pathway (12). PRAS40 has many phosphorylation sites, and its function was determined by its phosphorylation (13,14). PRAS40 was phosphorylated at T246 by Akt and at S183 by mTORC1 (15). It has been reported that PRAS40 was upregulated in many tumors, including gastric cancer, prostate cancer, etc. (16,17). However, the correlations between clinical characteristics and PRAS40 mRNA expression of ccRCC patients remains to be investigated.

In this study, we compared the PRAS40 mRNA expression between ccRCC tissues and normal tissues. We evaluated the correlations between clinical characteristics and PRAS40 mRNA expression of ccRCC patients. We investigated the biological pathways that related to PRAS40 using GSEA analysis. Our results suggest that PRAS40 was a promising diagnostic and prognostic biomarker for ccRCC.

The relevant data provided by TCGA are publicly available and open-ended, and do not require the approval of the local ethics committee. TCGA_KIRC HiSeqV2_PANCAN data were obtained from TCGA database (https://tcga.xenahubs.net). The levels of PRAS40 mRNA, clinicopathological details and general information of ccRCC were collected.

In this study, we analyzed the correlations between PRAS40 mRNA expression and all genes by R (v.3.6.1), then performed GSEA analysis using the cluster Profiler package in R. |ES|>1, P<0.05, and FDR <0.25 were considered to be statistically significant.

Clinical characteristics of the ccRCC patients 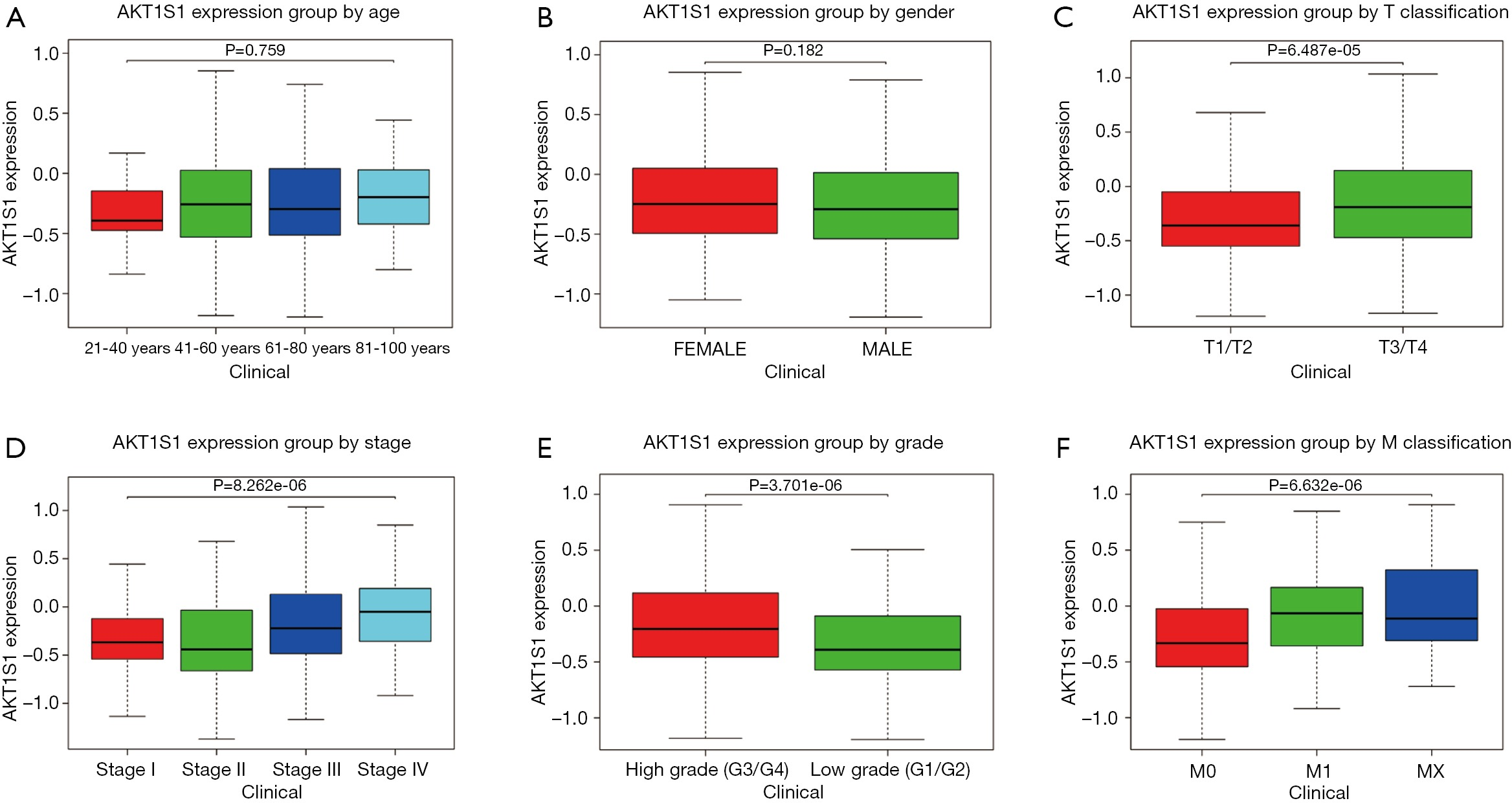 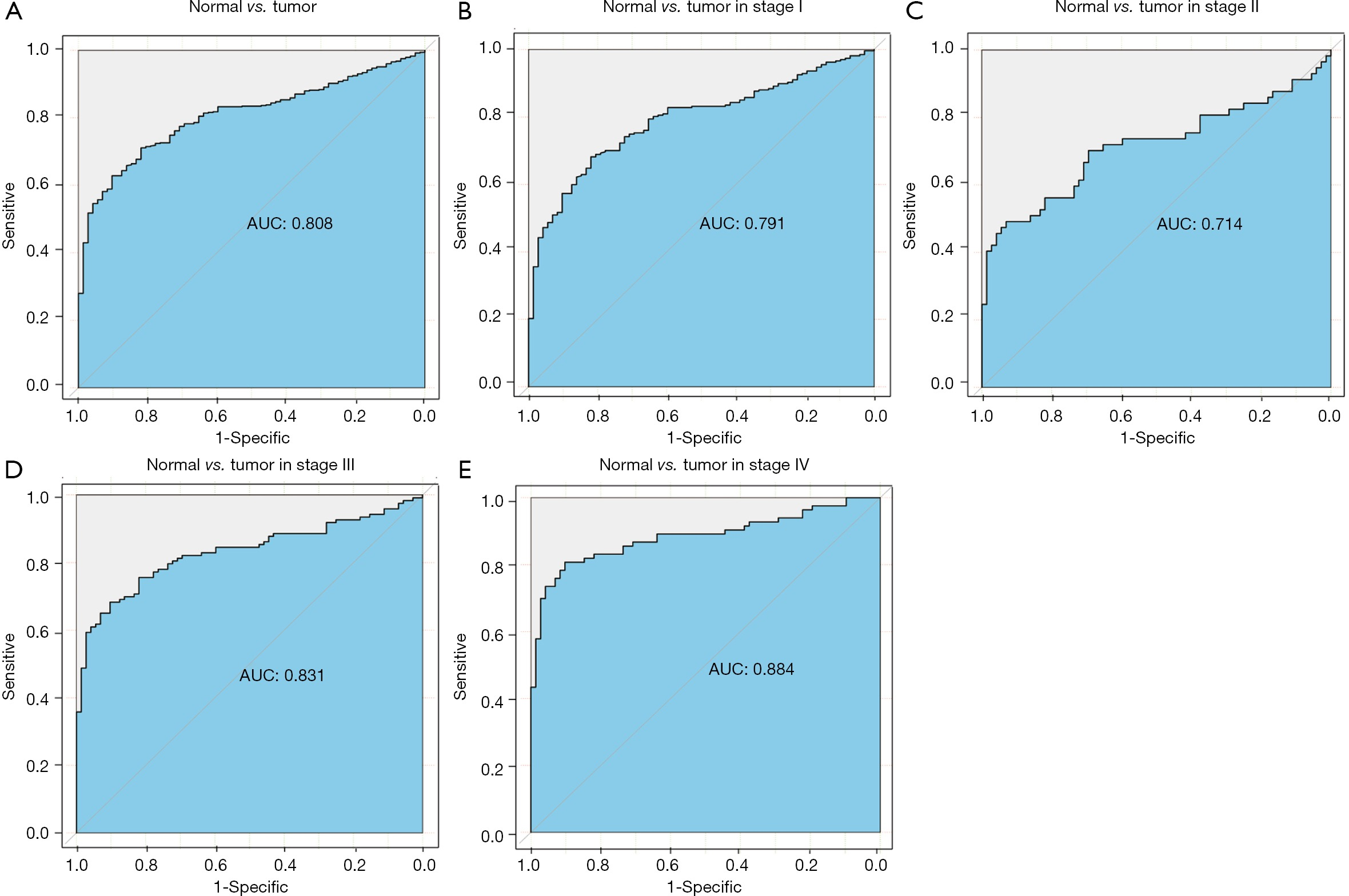 Correlation between clinical characteristics and PRAS40 mRNA expression of ccRCC 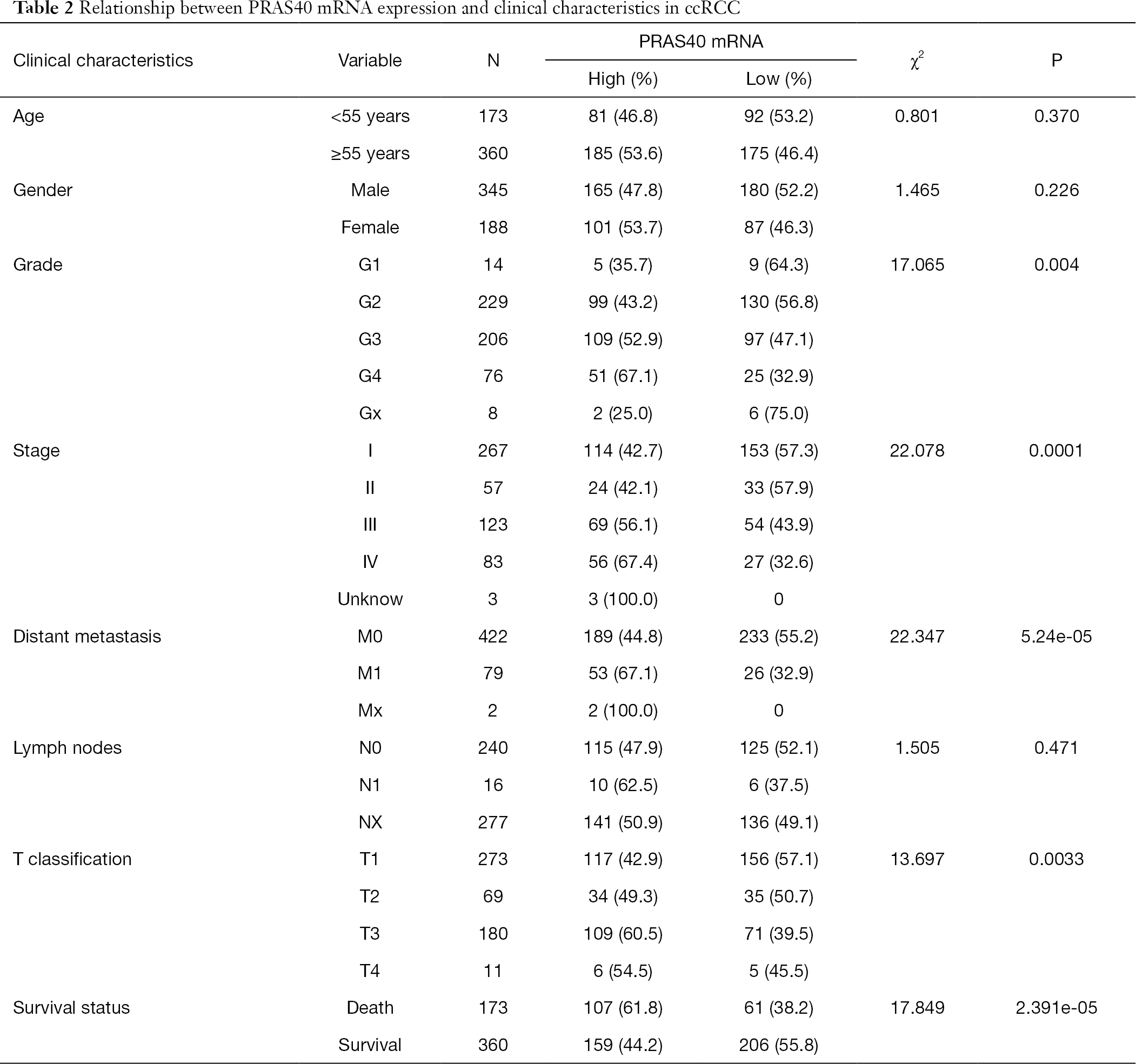 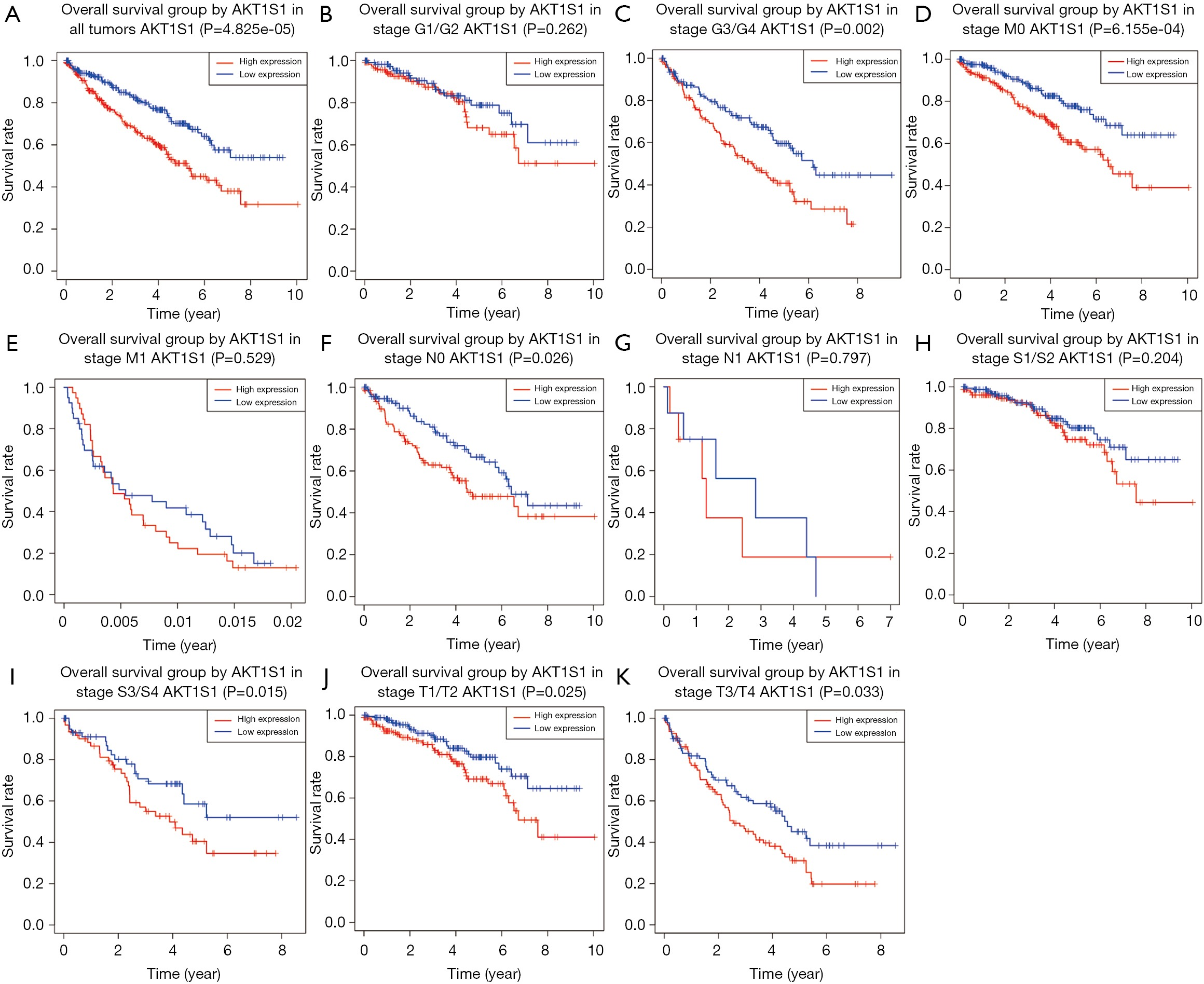 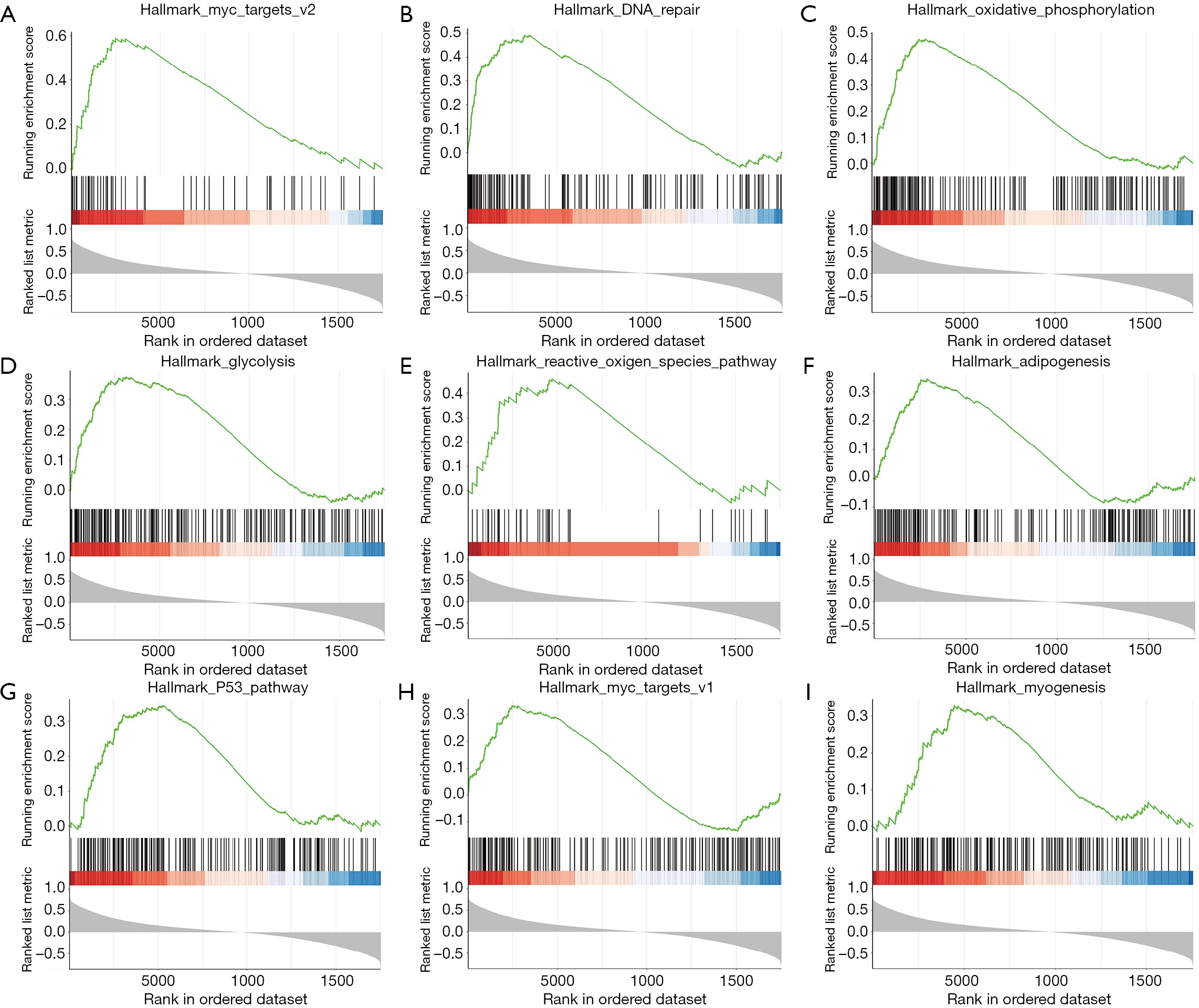 PRAS40 was aberrantly expressed or hyperphosphorylated in a variety of tumors (16-18). The most common type of PRAS40 alteration is overexpression, PRAS40 was overexpressed in breast cancer, melanoma, colon cancer, etc., but not found in ccRCC yet (19-21). Yuan et al. reported that approximately 40% of trastuzumab resistant HER2-positive patients with p-PRAS40 Thr246 overexpression, and increased risk of tumor progression (22). Ma et al. found that PRAS40 was upregulated and reduction of PRAS40 expression inhibit the proliferation of HCC (23). PRAS40 was overexpressed in Ewing sarcoma family tumors (ESFT), and silence PRAS40 inhibited the proliferation of ESFT cell (24). Consistently, our results revealed that higher PRAS40 mRNA expression in ccRCC. ROC analysis revealed that PRAS40 present a moderate diagnostic value, providing evidence that PRAS40 was a promising biomarker for the diagnosis of ccRCC.

Overall, our study verified the value of PRAS40 mRNA expression in diagnosis and prognosis of ccRCC patients. However, there are some limitations. First, we only conducted bioinformatics mining, our results should be verified in clinical samples. The second limitation is that the current study focuses on the transcription level of PRAS40 but not protein level, the specific mechanism of PRAS40 in ccRCC should be further investigated.

Conflicts of Interest: All authors have completed the ICMJE uniform disclosure form (available at http://dx.doi.org/10.21037/tau-20-741). The authors have no conflicts of interest to declare.

Ethical Statement: The authors are accountable for all aspects of the work in ensuring that questions related to the accuracy or integrity of any part of the work are appropriately investigated and resolved. The relevant data provided by TCGA are publicly available and open-ended, and do not require the approval of the local ethics committee.