Benign prostatic hyperplasia (BPH) is the most frequently diagnosed urological disease in ageing men (1). Histologically, BPH is characterized by the excessive proliferation of both epithelial cells and stromal cells within the transitional zone, causing prostate enlargement and lower urinary tract symptoms (LUTS) (2). BPH is chronically progressive and age dependent, which lead to a diminished health-related quality of life (3). The prevalence of BPH usually initiates after 40 years of age and gradually approaches the peak during 60 to 90 years old (1,3,4). The clinical progression of BPH is recorded, when an elderly man suffers from frequent LUTS or acute urinary retention (5,6).

Multiple risk factors have been proposed to contribute to the development of BPH, including ageing, diet, hormonal alterations, and chronic inflammation (3,7). Although the definite cause of BPH remains a dilemma, majority of etiological postulates indicate that the chronic histological inflammation plays an indispensable role in the development of BPH (8,9). The role of inflammation in BPH development is highlighted by the strong correlation between histological inflammation, clinical symptoms, and prostate volume (10). Actually, increased infiltration of macrophages, T-lymphocytes, and B-lymphocytes are frequently detected in prostate tissues from BPH patients (9-11). According to the published literatures, continuous inflammatory tissue damage and subsequent process of repetitive wound healing cause prominent proliferation of stromal and epithelial cells of the prostate (11). However, the distribution characteristics of inflammatory cells in hyperplastic prostatic tissue and its influences on disease development remain unknown.

In the present study, we investigated the infiltration condition of different inflammatory cells in glandular, periglandular, and stromal sections of hyperplastic prostatic tissues, and analyzed the correlation between infiltrated inflammation pattern and clinical data of BPH patients. We present the following article in accordance with the STROBE reporting checklist (available at http://dx.doi.org/10.21037/tau-20-448).

The present study included 76 patients who were diagnosed BPH and underwent transurethral prostatic resection (TURP) from January 2009 to February 2010 in our center. Patients were excluded if they had complaints of perineal, suprapubic or voiding pain, positive urine cultures, catheterization, medication history of 5α-reductase inhibitors, prostatic tumor or history of prostatitis and prostate surgery. The PSA test was performed for two times: about one month before surgery at outpatient department and one day before surgery at inpatient ward. And the mean value of PSA was recorded. Patient’s prostate size was measured by transrectal ultrasound one day before the TURP surgery. This study was approved by the institutional ethics committee (NO.: 2018-403) of our center. Patient records or information were anonymous and de-identified prior to analysis. Written informed consent was obtained from the patient for publication of this study and any accompanying images. This study was also in line with the Helsinki declaration (as revised in 2013).

BPH is mainly developed in the transitional zone of the prostate. In TURP, it is the prostate tissues at the transitional zone that are removed and sent for pathological examination. In our center, for every BPH patient, all the TURP tissues are sent for pathological examination. The TURP specimens were formalin fixed, dehydrated, paraffin-embedded and sliced at 5 µm per slice. According to the histopathological classification system for chronic prostatic inflammation proposed by the Chronic Prostatitis Collaborative Research Network (CPCRN) and the International Prostatitis Collaborative Network (IPCN) (11), the histological sections of inflammation were classified as glandular, periglandular, and stromal. The grades of inflammation were characterized by hematoxylin-eosin (H&E) staining from 0 to 3 (Table S1).

First, the tissue slices were stained with H&E. All the H&E sections of one BPH patient were back to back reviewed of by two pathologists. For each case, the prostatic inflammatory infiltrates in each histological structure (glandular, periglandular and stromal) were recorded by the extent of inflammation (focal, multifocal or diffuse) and the grade of inflammation (mild, moderate and severe). And the most dominant inflammation pattern of one patient was defined as the histological structure with the most extent and grade of inflammation. Then, we chose the tissue slice with the most dominant inflammation pattern for immunohistochemistry (IHC). IHC was performed using antibodies decorating T-lymphocytes (CD3, rabbit polyclonal Ab A0452; antigen retrieval, pH 6.0; 1:300; Dako; Corp.: Abcam; Cambridge, USA), B-lymphocytes (CD20, mouse monoclonal Ab clone L26; antigen retrieval, pH 6.0; 1/500; Dako; Corp.: Abcam; Cambridge, USA), and macrophages (CD68, mouse monoclonal Ab clone 10D6; antigen retrieval, pH 6.0; 1:800; Novocastra-Menarini; Corp.: Abcam; Cambridge, USA). The proportion of T-lymphocytes, B-lymphocytes and macrophages less than 5% in all cells per high magnification was defined as no infiltration, which was also back to back reviewed by the pathologists.

We used SPSS v21.0 software (Corp.: IBM; Armonk, USA) for statistical description and analysis. The Kolmogorov-Smirnov test determined the normality of the continuous variables. Mean and range presented continuous variables; the Student t-test or Mann-Whitney U-test compared the differences between the two groups. Frequency and percentile were used to present categorical or ranked variables; the Fisher exact test was used to test the differences. Logistic regression analysis was performed in multivariate analysis. All reported P values are two sided, and P<0.05 was considered statistically significant. 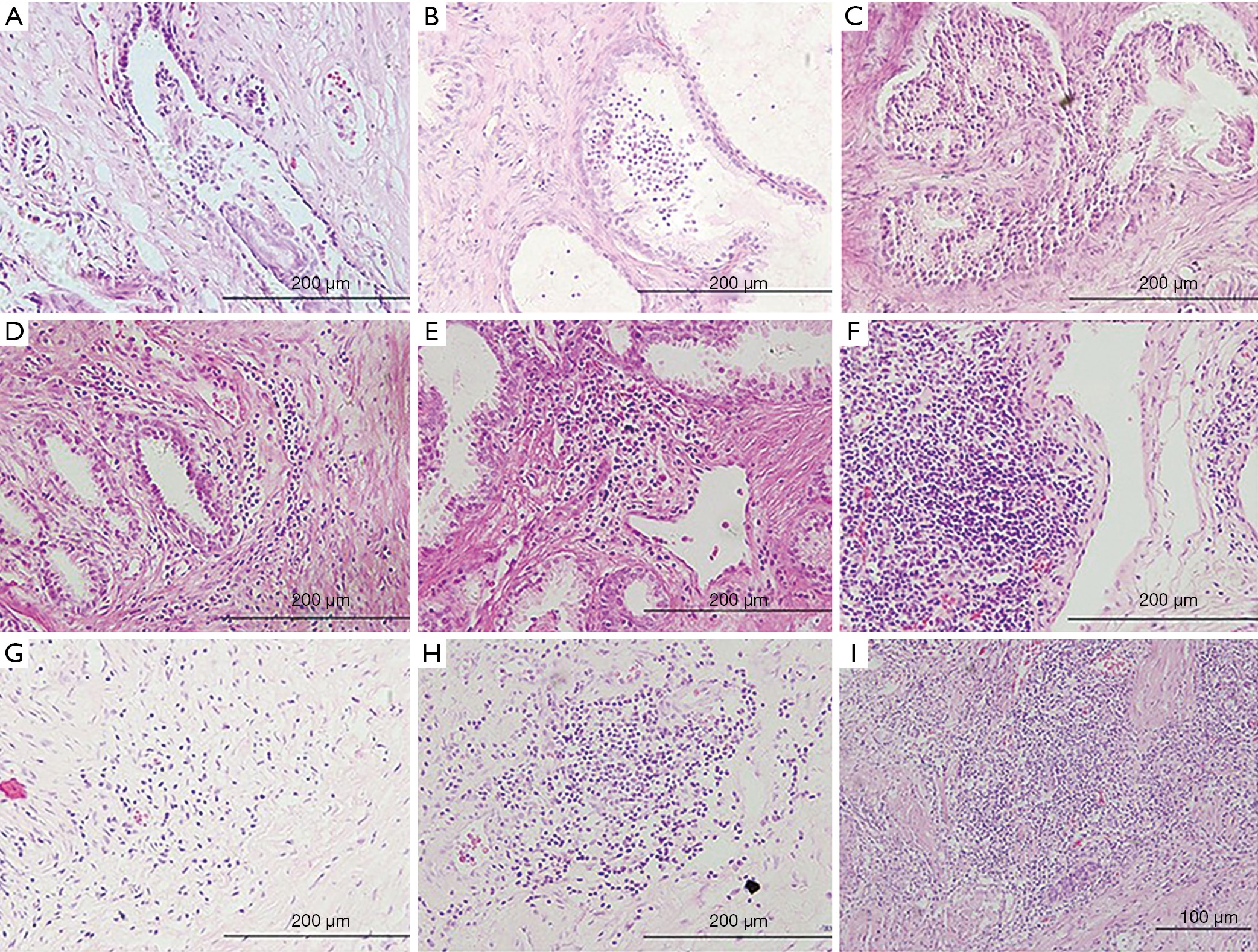 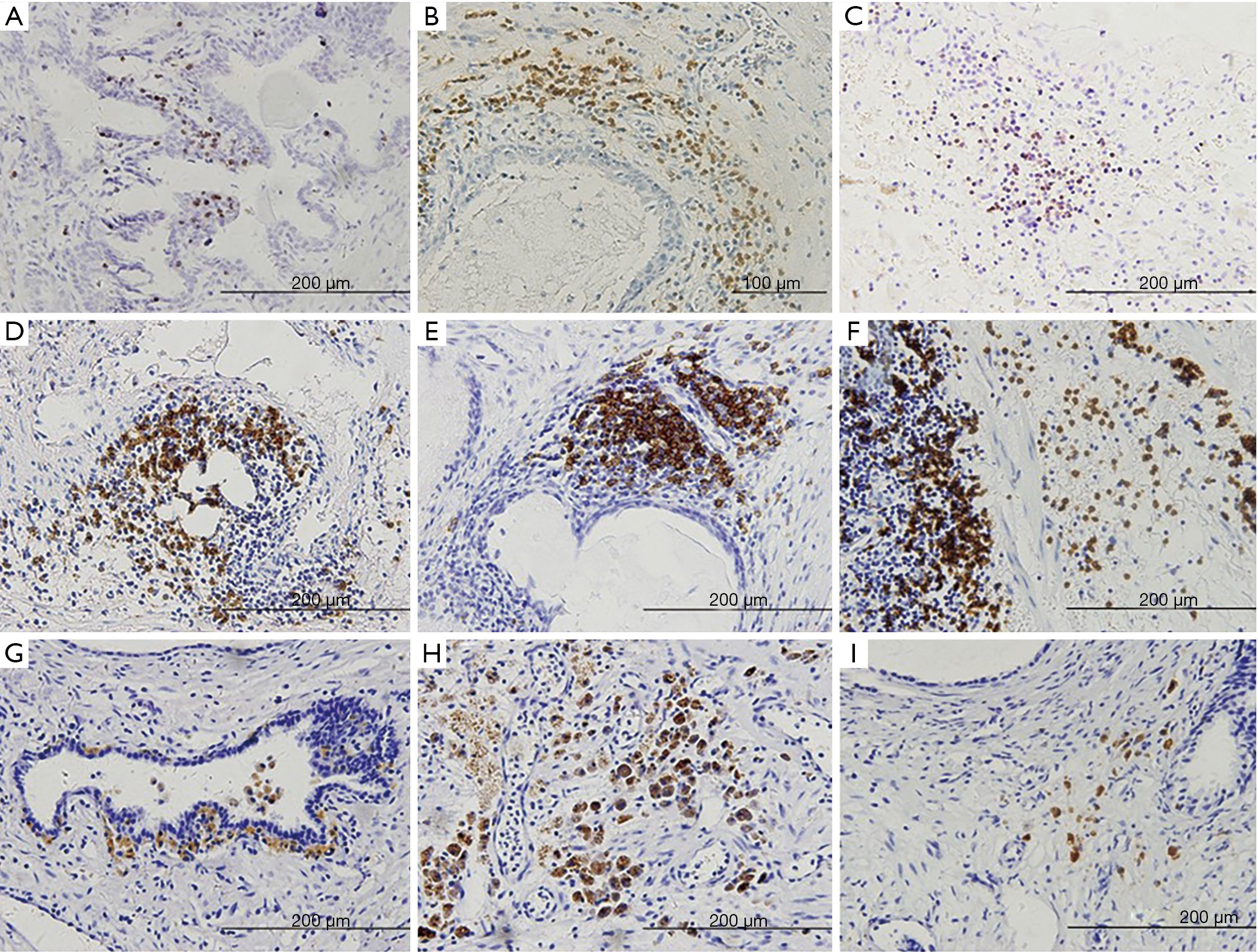 A central feature of obesity is systemic chronic inflammation (14). In the process of chronic inflammation of obese adipose tissue, a variety of immune cells are involved. Therefore, obesity may also affect the distribution of inflammatory cells in BPH (15). We divided patients into two groups according to whether they were overweight (BMI >25 kg/m2) (Table 4). We found that overweight patients had higher glandular inflammation infiltration rate in the prostate (P=0.010). 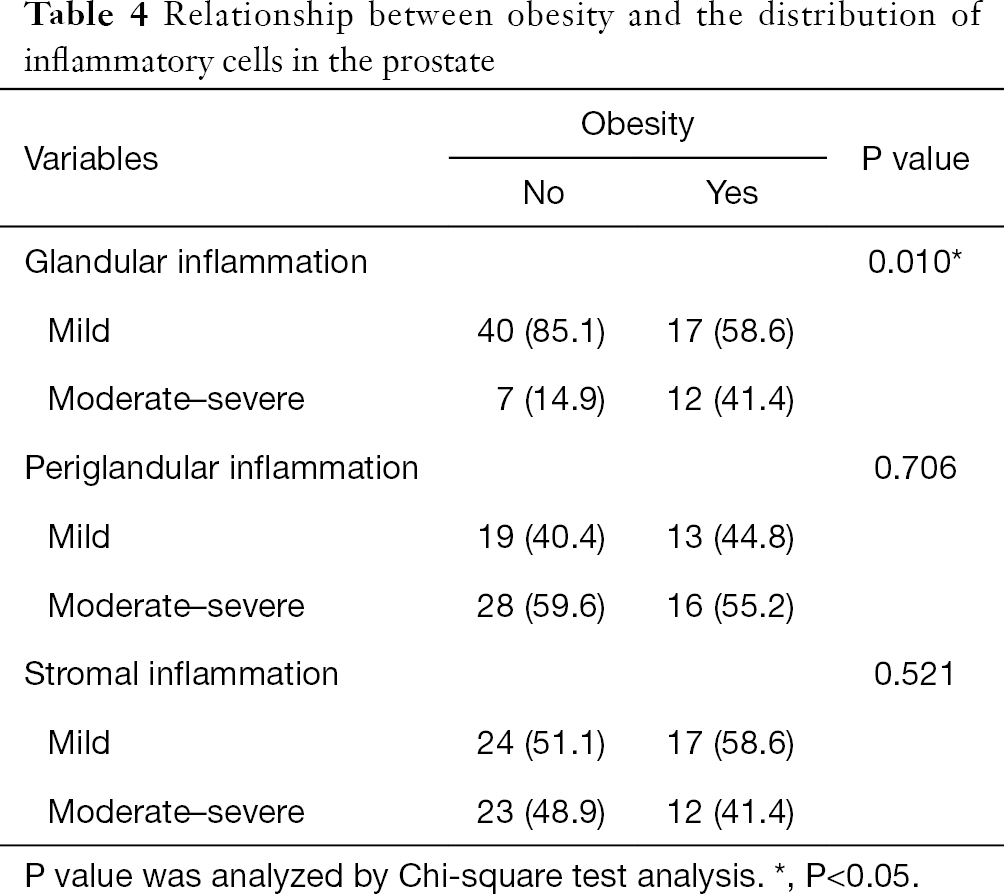 We also did further analysis to see if there was a relationship between the specific type of immune cell infiltration and serum PSA level (Table S3). We found glandular and periglandular T-lymphocytes infiltration were correlated with serum PSA level significantly (P=0.003, 0.001, respectively).

Histologic inflammatory infiltration is a universal histopathology in prostatic specimens (14,16). Our investigation revealed that all specimens derived from TURP surgery had histological inflammation, although all of our patients neither have clinical signs of prostatitis nor any correlation with urinary infection. Results from multicentric clinical trials such as REDUCE also showed histologic inflammation affected 77.6% of 8,224 patients respectively (17-19).

The frequently observed inflammatory cells in periglandular section indicate the genesis of immune response in prostate may proceed from this area. Epithelial injury could cause the periglandular tissue exposed to secretion products of the prostate which has a high proteolytic activity. They could destroy connective tissue cells and digest major matrix areas, allowing broad access of autoantigenic molecules to the immune system of the prostate (15,20,21). Stimuli such as infectious agents or urinary reflux, metabolic syndrome, aging processes, and autoimmune responses can also cause prostatic immune dysregulation through the development of multiple molecular pathways involved in inflammatory infiltration (9). Therefore, BPH could be an immune inflammatory disease.

Although previous studies revealed patients with prostatic inflammation had larger prostate volumes, higher International Prostate Symptom Score (IPSS) and greater risk of acute urinary retention than those without inflammation (10,18,19,26), it is still unclear that which histologic section or immune cells subtype infiltration is relevant with prostate volume. In our study, the multiple regression analysis results showed age, degree of glandular and stromal inflammation would be the most important factors contributing to increased prostate volume. The aggressiveness of the glandular and stromal inflammation can cause tissue destruction and upregulated many proinflammatory cytokines. Inflammatory cells infiltration releases a number of cytokines and growth factors and induces tissue rebuilding and cellular proliferation. This wound-healing process could contribute to the prostate hyperplasia and might explain the pathogenesis of BPH.

Epidemiological evidence suggests that prostatic inflammation associated with BPH is likely to be caused by metabolic stress signals, while obesity and metabolic syndrome may be associated with the development of BPH (33-35) and LUTS (36). In Tyagi et al.’s research, elevated urinary chemokines supported BPH as a metabolic disorder, suggesting a molecular link between BPH/LUTS and inflammation of the prostate (37).

As we know, an increase in PSA is associated with aging and prostate volume. In addition to age and prostate volume, inflammatory cell infiltration may also be a factor in PSA elevation. Inflammation might be present in a significant proportion of patients with elevated serum PSA level (39,40). Previous studies showed that the elevation of PSA levels was correlated with the glandular inflammatory infiltration (13). However, which type of immune cell is most responsible for the elevated serum PSA level was not mentioned. Our study showed grading of glandular inflammation and glandular T-lymphocytes infiltration were correlated with serum PSA level significantly.

The difference between Grade 0 and Grade 2 glandular inflammation did reach statistical significance. We assumed the prostate epithelium remains its integrity when the inflammation is mild (Grade 1). With the histologic aggressiveness grading of glandular inflammation, prostatic epithelial cells surrounding the affected area might be damaged and PSA stored in the epithelial cells released into the blood circulation result in the abnormal serum PSA elevation. Glandular T-lymphocytes infiltration plays an important role in disruption of the prostatic glandular epithelium (19). Total amount of T-lymphocytes in prostate might affect serum PSA level. There are more T-lymphocytes in the stroma than the gland, so the sampling error may lead to this bias.

The present study has some limitations. Firstly, prostatic hyperplasia mainly occurs in the transitional zone of the prostate gland, which is also the main area to be removed during TURP surgery. TURP excision tissue can be used to study inflammation of BPH (7). Meanwhile, the published literatures use the similar method to analyze the inflammatory condition of BPH tissues (7). But the limitations could not be ignored: the sampling method failed to exactly localize the inflammation condition on the transitional zone of the prostate. Secondly, we mainly studied the relationship between total inflammatory infiltration and clinical indicators, and the relationship between T-lymphocytes, B-lymphocytes and macrophages of inflammatory cells and clinical indicators. In the future, it is necessary to study the relationship between subtypes of inflammatory cells (M1/M2 macrophages, CD4/CD8+ T-lymphocytes) and clinical indicators. Thirdly, as a single-center retrospective study, the sample size should be further increased in the future and multiple indicators should be analyzed to better describe the situation of inflammatory cells in BPH tissues.

We characterized infiltrated patterns of different inflammatory cells in histological structures of hyperplasic prostatic tissues from surgically treated BPH specimens. The role of inflammation in BPH development was highlighted by its correlation with the prostate volume, metabolism and PSA level.

Reporting Checklist: The authors have completed the STROBE reporting checklist. Available at http://dx.doi.org/10.21037/tau-20-448

Conflicts of Interest: All authors have completed the ICMJE uniform disclosure form (available at http://dx.doi.org/10.21037/tau-20-448). The authors have no conflicts of interest to declare.

Ethical Statement: The authors are accountable for all aspects of the work in ensuring that questions related to the accuracy or integrity of any part of the work are appropriately investigated and resolved. This study was approved by the institutional ethics committee (NO.: 2018-403) of our center. Patient records or information were anonymous and de-identified prior to analysis. Written informed consent was obtained from the patient for publication of this study and any accompanying images. This study was also in line with the Helsinki declaration (as revised in 2013).