Bartholin gland cyst in a transgender male: case report of a rare occurrence

Gender dysphoria (GD) is a phenomenon that has attained increasing attention in the past decades. It refers to the distress a person feels due to a mismatch between their gender identity and their sex assigned at birth. Depending on the trans person’s personal situation, this conflict can lead to the desire to undergo masculinizing or feminizing gender confirmation surgery (GCS) (1). Trans men are persons who were assigned female at birth, but identify as male, and often want to carry out masculinizing surgical treatment options including mastectomy, hysterectomy, ovariectomy, colpectomy, metoidioplasty, phalloplasty, urethra construction, scrotoplasty, and testicular and penile prosthesis. 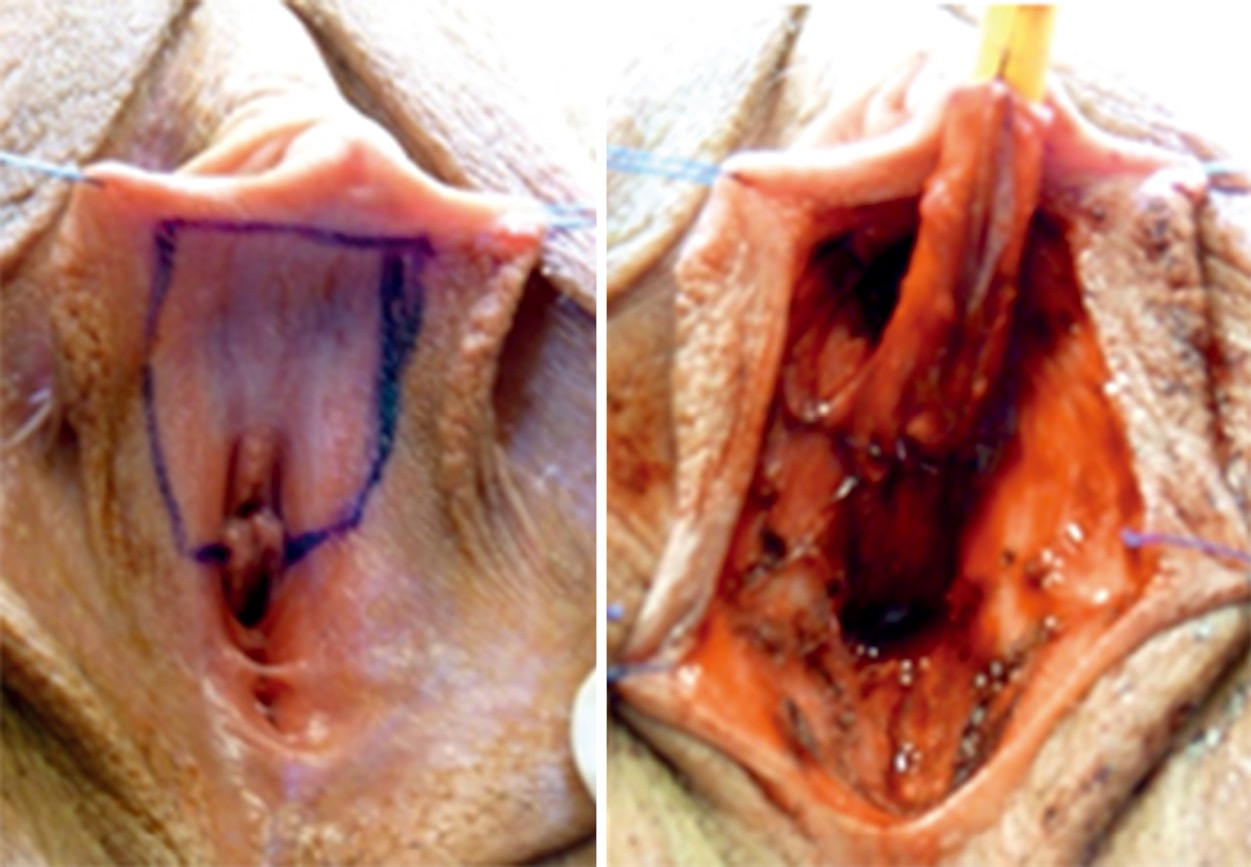 Figure 1 Use of the labia minora to lengthen the urethra in a gender confirmation surgery for phalloplasty or Boutonnière. (Source: Department of Urology, University Hospital Basel).

Bartholin glands are located in the female labia minora and secrete fluid for vaginal lubrication. If obstruction occurs in the gland’s duct, cysts or even abscesses may develop. On the one hand a cyst is often asymptomatic or shows unspecific symptoms like tenderness while walking or sitting. Furthermore, increased vaginal discharge can occur. Gland abscesses, on the other hand, are extremely painful. The tissue is hyperaemic and shows tenderness and possibly induration upon palpation. Again, increased or even purulent vaginal discharge can occur (3).

A woman’s lifetime prevalence to develop a Bartholin gland abscess or cyst is approximately 2% (4). The recurrence rate is roughly 10% and depends on the treatment approach (5). Treatment options include placement of a catheter, marsupialization, and laser therapy (6). However, Bartholin gland cysts have never been described in trans men before. We present the following article in accordance with the CARE reporting checklist.

In accordance with the University Hospital Basel policies, case reports are not considered to be a research subject to Institutional Review Board review, and are thus exempt from formal approval for publication. We have obtained, however, informed consent from the patient for the publication of this case.

A 77-year-old trans man (i.e., female to male gender reassignment) presented with a perineal swelling dorsal and right to his Boutonnière. The medical history is presented in the Timeline (Figure 2). The patient’s GCS, a phalloplasty using a radial free forearm flap with construction of a Boutonnière, had taken place in 1984. His medical history included recurrent urinary tract infections (UTIs) with Escherichia coli and a sufficiently treated vesicoureteral reflux in 1995. Ever since his GCS, he has had difficulties emptying his bladder, represented by the need to perform a tilting movement of the pelvis in order to urinate. Prior to the patient’s GCS in 1984, no gynaecological disease was recorded such das Bartholin gland cysts. 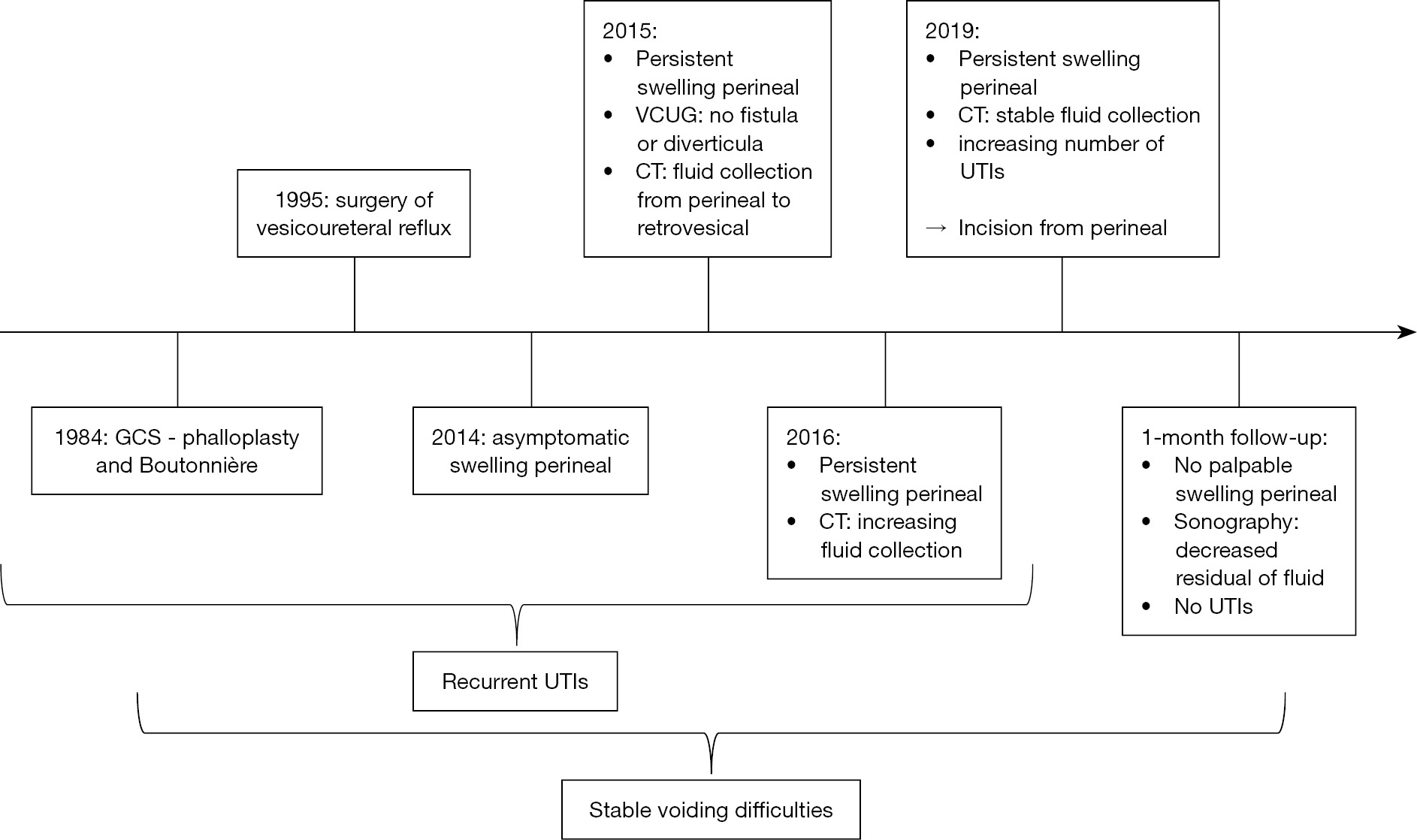 The patient had first noticed painless and otherwise asymptomatic swelling in 2014. A consultation in 2015 revealed a softly palpable, indolent mass upon Valsalva manoeuvre, without any signs of local inflammation. A computed tomography (CT) was carried out, which displayed a fluid collection extending from the perineal region up to the retrovesical space, without connection to the surrounding organs. The voiding cystourethrography showed neither diverticula nor fistula in the bladder and urethra. Since at first the patient did not report an increased number of UTIs or augmented difficulties emptying his bladder, no intervention was taken. At one-year follow-up, the still asymptomatic swelling had progressed to a size of 2 cm × 2 cm, and another year later to 4.5 cm × 9.6 cm. A CT scan in 2019 showed no further growth (5 cm × 10 cm; Figures 3,4). However, due to the increasing number of UTIs and the patient’s obstructive voiding difficulties, we decided to perform an incision of the fluid collection from perineal. A great amount of non-odorous, viscous, and turbid liquid discharged. The situs was rinsed, and then closed after being equipped with a Penrose drain. In culture, the liquid did not show bacterial growth.

Figure 3 Computed tomography 2015, 2017, and 2019. The bladder is marked with a blue, the cyst with an orange asterisk (*). (Source: patient’s archive, Department of Radiology, University Hospital Basel). 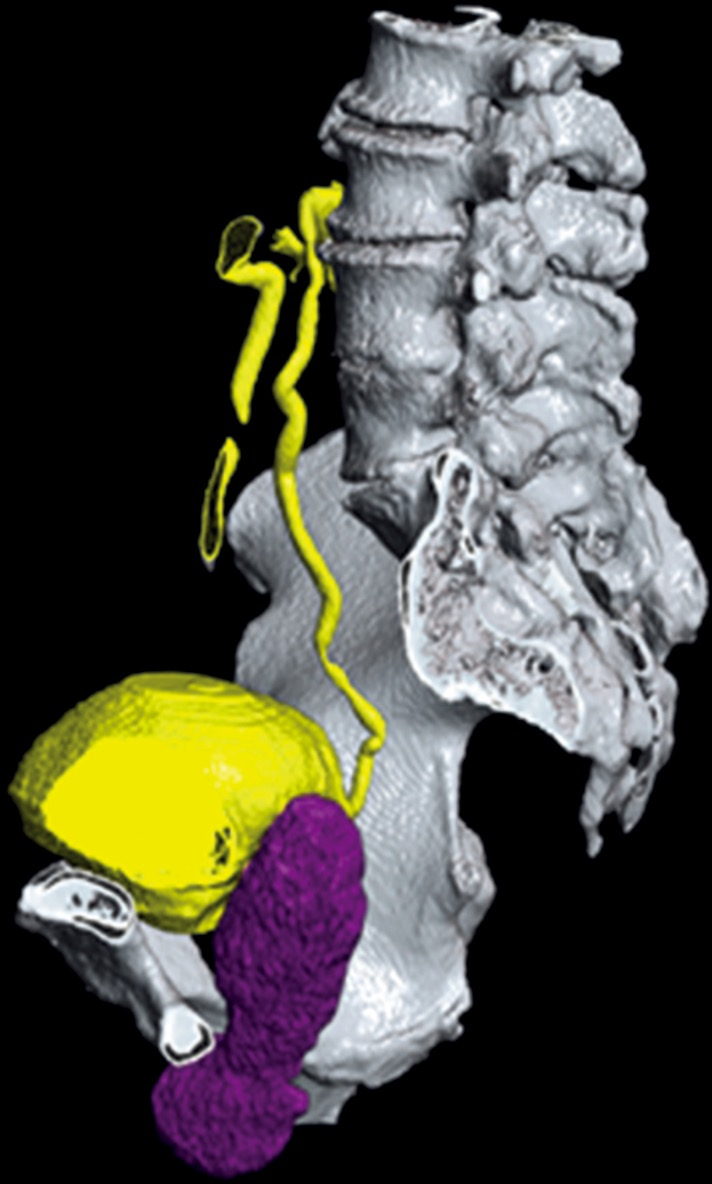 The differential diagnosis included a late post-operative seroma, a diverticulum of the urethra, and a cyst of the residual Bartholin glands from the formerly female genital tract.

A follow-up sonography after one month revealed a remaining cyst size of 6.05 mL, which was assumed to be residual fluid or newly produced liquid (Figure 5). To this day, the patient still needs to perform a tilting movement of the pelvis in order to empty his entire bladder, but he has not had any UTIs since the incision of the cyst. 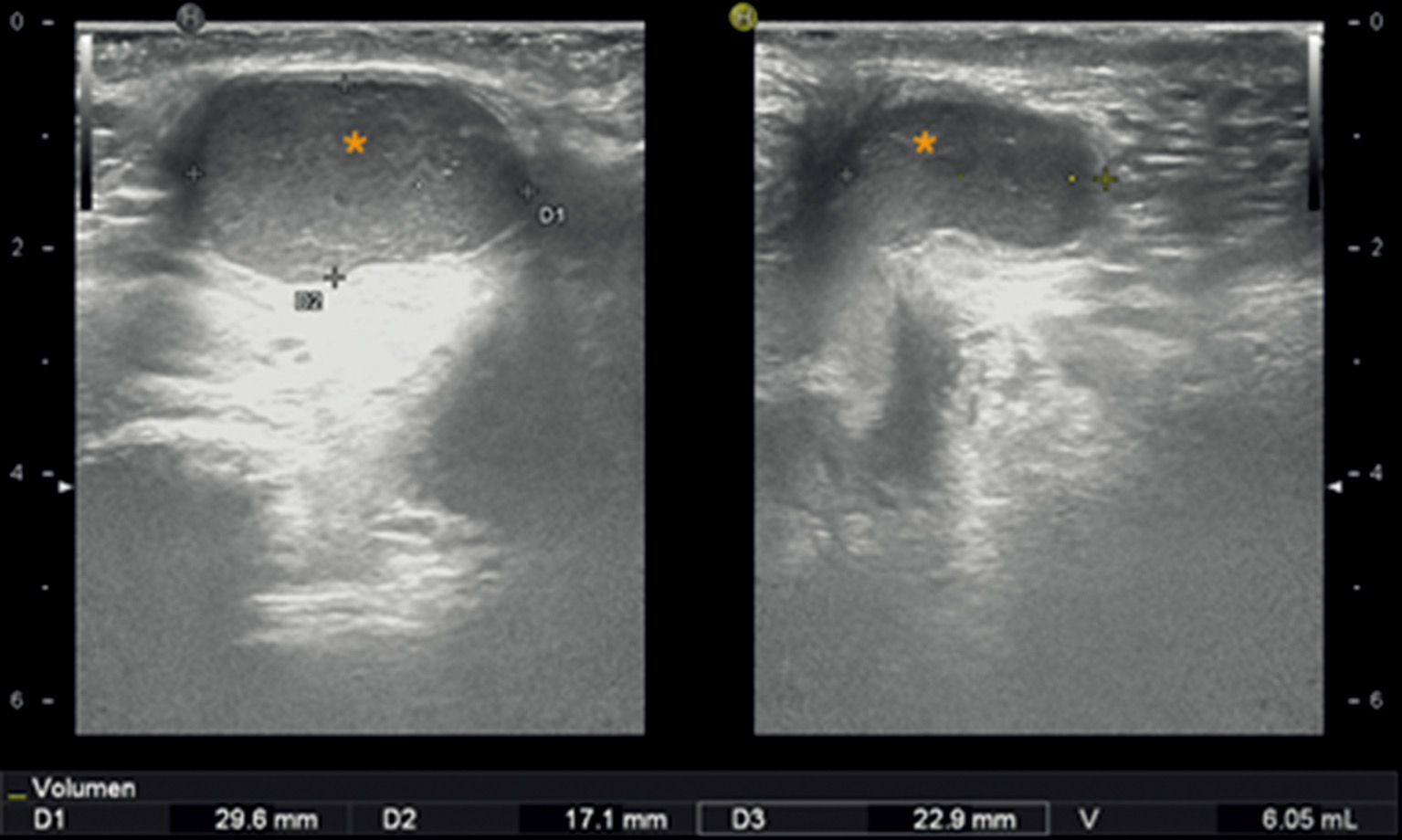 This case shows the importance of an expanded understanding of sex/gender concepts when treating trans people medically. Due to the unusual situation, which results from the incongruence between sexual and gender identity or gender role characteristics, the differential diagnostic perspective must be very broad in these patient group. Diseases (e.g., Bartholin gland cyst) that were considered “sex-specific” up to this point should be considered “only gender-typical” due to our understanding of gender variance. This is especially true if one considers not only the postoperative but also the anatomical situation at birth of trans persons.

The most frequent cause of urination difficulties in trans men are urethral strictures (7), yet these could be ruled out in our patient. CT-scans and cystography showed no evidence of a urethral diverticulum or fistula from the collection to the bladder. Also, a post-operative seroma seemed unlikely as differential diagnosis, since the swelling occurred 25 years after the patient’s GCS. On the other hand, a Bartholin gland cyst seemed highly probable. The fact that labia minora tissue had been used in the GCS to lengthen the urethra, the correspondent localization of the cyst, and the aspect of the discharged fluid have led us to our final diagnosis.

A literature search has been performed and revealed no similar cases. Therefore, the current report seems to be the first description addressing the specific finding of a symptomatic Bartholin gland cyst in a trans man.

Follow-up examinations and imaging will help validating our diagnosis. In case of a relapse, we would conduct a cytological analysis (which could help confirm the source of the fluid collection, i.e., a Bartholin gland) and perform a marsupialization.

The patient was very relieved that it is not a malignant mass and is open to further interventions if it progresses again.

To our knowledge, this is the first case report of a symptomatic Bartholin gland cyst in a trans man. It stresses the importance of an expanded understanding of sex/gender concepts when treating trans people. As the case shows, it was the integration of this knowledge that made it possible to view a disease (e.g., Bartholin gland cyst) previously considered “gender-specific” as “only gender-typical”. This change in perspective is also of great relevance for medical and especially surgical subjects, since it ultimately leads to therapeutic success.

Conflicts of Interest: All authors have completed the ICMJE uniform disclosure form (available at http://dx.doi.org/10.21037/tau-20-733). The authors have no conflicts of interest to declare.

Ethical Statement: The authors are accountable for all aspects of the work in ensuring that questions related to the accuracy or integrity of any part of the work are appropriately investigated and resolved. All procedures performed in studies involving human participants were in accordance with the Declaration of Helsinki (as revised in 2013). Informed consent was obtained from the patient for publication of this case report and any accompanying images.