Laparoscopic nephron-sparing surgery (LNSS) has been widely accepted as an effective way to treat T1 renal cell carcinoma (RCC) (1). Nowadays, LNSS has been greatly improved, especially the novel technique of laparoscopic partial nephrectomy with precise segmental renal artery clamping widely adopted in our center (1,2). The enhanced recovery after surgery (ERAS) represents a multidisciplinary collaboration which would transform traditional care programs into an effective postoperative rehabilitation program, in order to realize a shorter hospitalization, reduced complications and a reduction of medical cost with increased satisfaction and safety after discharge (3). To date, no studies have shown whether the ERAS protocol is superior to conventional method after LNSS.

In this study, we retrospectively compared postoperative outcomes and perioperative complications of patients with RCC after the ERAS or conventional protocols between December 2015 and March 2017. We present the following article in accordance with the STROBE reporting checklist (available at http://dx.doi.org/10.21037/tau-19-924).

Approval for this study was granted by the ethics committee of Nanjing Medical University (China) (NO.:2015-SRFA-042) and informed written consent was received from all participants. All research procedures were conducted in accordance with the Declaration of Helsinki (as revised in 2013).

The principle of conventional care and the ERAS protocol were shown in Table 1. 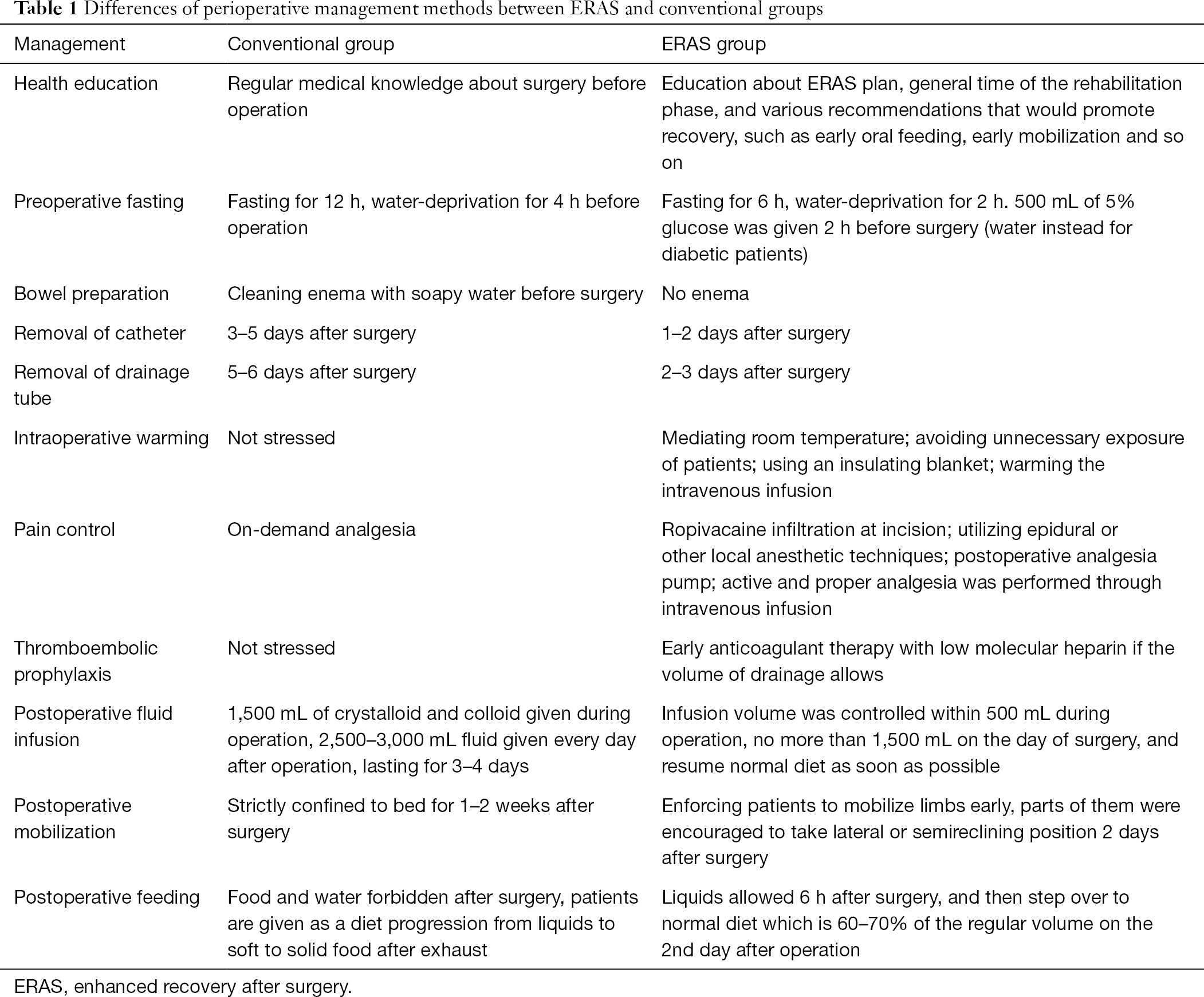 Protocols of ERAS and conventional groups

Statistical analyses were performed with SPSS 13.0 software. Student’s t-test and the Chi-square test were used to analyze the differences between groups. P<0.05 was considered to indicate a statistical significant difference.

As shown in Table 2, there was no statistical significance about the demographics and tumor characteristics of patients between two groups (P>0.05). 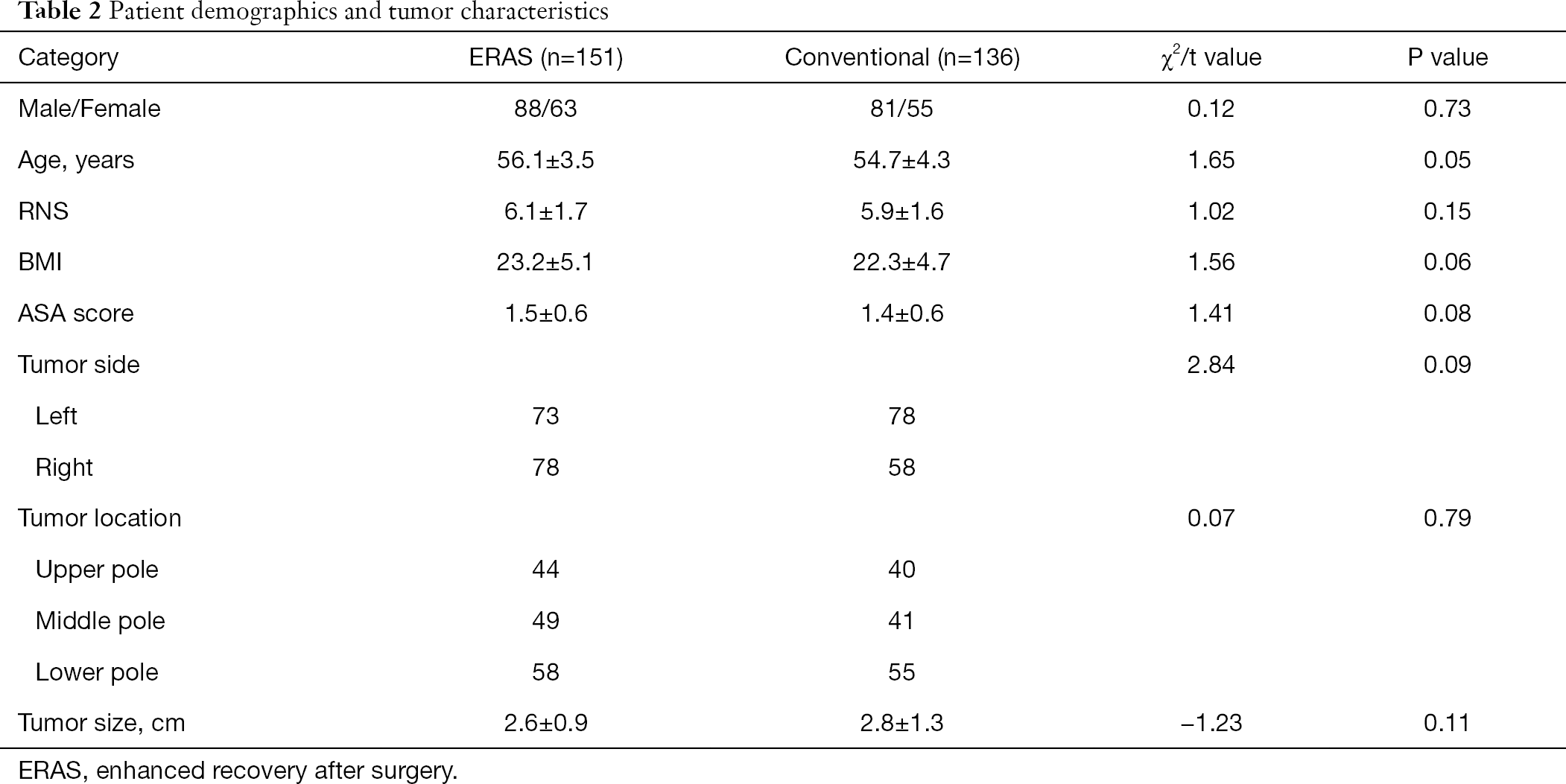 Patients in both groups were discharged successfully and there was no death case. As shown in Table 4, there were only 5 cases of complications in ERAS group, which was significantly less than that of conventional group (36 cases, P<0.01).

The ERAS protocol is standardized, multidisciplinary and evidence-based tools that provide guidelines for clinical decision-making for enhancing recovery of patients after surgery (4). The key goals of ERAS protocol are to reduce postoperative complications, shorten hospitalization and cut medical cost as well as enhance safety. In this study, a multidisciplinary ERAS program for LNSS was implemented at our center. Eventually, postoperative recovery was apparently accelerated, complications were reduced, time stay in hospital was shortened and the total cost was obviously cut down. Several pivotal items among ERAS concept have played a crucial role in enhanced recovery after LNSS. First of all, clear fluid should be allowed up to 2 h and solids up to 6 h before induction of anesthesia. Carbohydrate should be used regularly up to 2 h prior to surgery. Secondly, mechanical bowel preparation should be abandoned before renal operation. Thirdly, administering too much fluid during or after surgery might result in bowel enema, pulmonary edema, water intoxication and so on, all of which would prolong the recovery. Thus, intraoperative and postoperative restricted fluid therapy should be used. In addition, early removal of catheter and drainage tube as well as satisfactory pain control can promote early mobilization, which can also reduce complications as hypostatic pneumonia and venous thrombosis.

Recovery of gastrointestinal function is an important indicator of postoperative recovery. The ERAS protocol suggests avoiding of preoperative mechanical enema, preoperative carbohydrate loading and restricted fluid therapy, which have been strictly performed in our ERAS group. It was reported that the time of first flatus was shorter in fast-track laparoscopic retroperitoneal adrenalectomy compared with the conventional protocol (5). In our study, the ERAS group had significantly shorter time to the recovery of gastrointestinal function than did the conventional group. Besides, enforced postoperative early mobilization might be another important factor for fast recovery of gastrointestinal function (6). Thus, patients in ERAS group were enforced to mobilize limbs early, parts of whom were encouraged to take lateral or semireclining position 2 days after LNSS, as long as suture was reliable. In addition, postoperative early oral feedings can promote intestinal peristalsis, maintain the function of intestinal mucosa, prevent bacterial translocation, and help patients to recover as soon as possible (7). In this study, a liquid diet was recommended for patients 6 h after operation in ERAS group. And if there was no nausea, vomiting, or ileus, normal eating can resume 3 days after surgery.

In the current study, there were significant differences of several complications between both groups. Among these, lower incidence of preoperative hypoglycemia in ERAS group might be attributed to a regular diet until 6 hours before surgery and a drink of 500 mL 5% glucose 2 hours before operation. Recent clinical studies have shown that preoperative intake of a carbohydrate drink may also reduce the postoperative endocrine catabolic responses and improve insulin resistance (8). Secondly, low rate of postoperative hypostatic pneumonia may be due to early postoperative mobilization and restricted fluid therapy. Finally, there was an obvious lower incidence of venous thrombosis than did the conventional group. In ERAS group of this study, low molecular-weight heparin has been administered as soon as the volume of drainage is less than 50 mL, maintained to discharge. ASCO guideline has recommended most patients with active cancers to receive prophylactic treatment of thrombus throughout the hospital stay. It seems that regular thromboembolic prophylaxis after LNSS has significant clinical value.

To the best of our knowledge, this is the first study to introduce the ERAS protocol for LNSS. However, there were several limitations of this study. Firstly, this study was not a randomized study and was a single centre retrospective study. Besides, the size of sample population was simply based on the number of patients enrolled at our department, which was not specifically calculated according to a study design. Additionally, the management of protocol might be slightly changed due to subjective factor from patients, which might result in inevitable bias of results.

A comprehensive revision of postoperative care called ERAS in patients, who accepted LNSS, may accelerate rehabilitation, decrease complications, cut down hospitalization expenses and increase satisfaction of patients. But implementation of the ERAS protocol is especially difficult when only performed in urology department. Successful application of the ERAS protocol depends on close cooperation with anesthesiologists, nurses, physiotherapy staff, patients and their family and so on.

Reporting Checklist: The authors have completed the STROBE reporting checklist. Available at http://dx.doi.org/10.21037/tau-19-924

Conflicts of Interest: All authors have completed the ICMJE uniform disclosure form (available at http://dx.doi.org/10.21037/tau-19-924). The authors have no conflicts of interest to declare.

Ethical Statement: The authors are accountable for all aspects of the work in ensuring that questions related to the accuracy or integrity of any part of the work are appropriately investigated and resolved. Approval for this study was granted by the ethics committee of Nanjing Medical University (China) (NO.:2015-SRFA-042) and informed written consent was received from all participants. All research procedures were conducted in accordance with the Declaration of Helsinki (as revised in 2013).