Renal cell carcinoma (RCC), as the most common type of kidney cancers, is mainly classified into clear cell RCC (ccRCC) and non-ccRCC according to the histology (1). ccRCC was the most common subtype of RCC, accounting for 75–80% of the total diagnosed cases, while papillary RCC (pRCC) ranked the second, accounting for approximately 10–15% of the total diseases (2,3). Further, pRCC could be divided into two major subtypes according to histopathological features. Type I tumors are usually with thin basophilic papillary cells, while type II pRCCs are composed of thicker nipples and eosinophilic cytoplasm (4).

Currently, the prognosis of pRCC remained poor, and there were still no effective methods for the treatment of advanced pRCC (5). Therefore, it was essential to identify related prognostic factors for improving the survival of pRCC at early stage. Traditionally, TNM stage was regarded as one of the most important prognostic factors in various cancers (6). However, it was not sufficient to cover the biological characteristics of cancer and predict survival outcomes (7). In addition, other clinical variables such as age, gender, ethnicity, grade, surgical treatment, adjuvant therapy, and molecular characteristics may generate influence on the prognosis of cancer patients (8). Nevertheless, the prognostic value of these parameters in pRCC remained inconsistent and even doubtful.

In recent years, there have been a lot of tools used to predict the survival outcomes in numerous cancers (9-11). Of the available tools, nomogram is currently one of the most effective and accurate methods for predicting the prognosis of cancer patients (12). The aim of this retrospective study was to explore the clinicopathological features associated with the prognosis of pRCC and to construct nomograms to predict survival on account of these features.

Primary data of patients with pRCC were obtained from the Surveillance, Epidemiology, and End Results (SEER) database (http://seer.cancer.gov/) utilizing the SEER*Stat software [Version 8.3.6; National Cancer Institute, Bethesda, United States (US)]. It is a public and population-based database which covers approximately 30% of the US population. The inclusion criteria of this study were as follows: (I) diagnosed as pRCC (International Classification of Diseases for Oncology: 8260/3) with positive histology, (II) year at diagnosis was from 2010 to 2014 to ensure a relatively long follow-up period, (III) complete data were available with active follow-up. Additionally, the exclusion criteria were as follows: (I) missing/unknown data in following variables: age, sex, race, American Joint Committee on Cancer (AJCC) 7th edition TNM stage, tumor laterality (bilateral tumors also been excluded), surgery, radiation, chemotherapy, follow-up time, insurance status, marital status, survival outcomes and so on, (II) pRCC was not the first primary malignancy, (III) type of reporting source was autopsy only or death certificate only.

Primary data were reviewed respectively by two independent investigators (Haicui Yan and Xiyi Wei) to extract the clinical characteristics and survival outcomes of the enrolled patients. Variables included age, sex, race, tumor laterality, AJCC 7th edition TNM stage, the use of radiation, chemotherapy, surgery, lymph node removal (LNR), survival months, survival status, insurance status and marital status. The primary endpoints were overall survival (OS) and cancer-specific survival (CSS). Survival time was calculated from the date of diagnosis to the date of death from pRCC (defined as CSS) or any disease cause (defined as OS). Lastly, use of SEER was exempt from Institutional Review Board (IRB).

In order to develop the prognostic nomograms and undergo further external validation, all of the enrolled patients were divided into training group and validation group randomly at a ratio of 7:3 by using random-number generation method. Finally, chi-square test was utilized to make comparisons in basic characteristics between two groups.

Uni- and multivariate Cox regression analyses were conducted to explore the prognostic factors which affect OS and CSS significantly. Additionally, hazard ratios (HRs) and corresponding 95% confidence intervals (CIs) of selected factors were calculated. According to the results of multivariate Cox regression analysis, predictive nomograms for 3- and 5-year CSS and OS were developed. In the training group, survival curves for different variables were produced by Kaplan-Meier (KM) analyses and were compared utilizing the log-rank test.

To assess the predictive ability and accuracy of the nomograms, discrimination and calibration of the nomograms were measured in two groups. The area under receiver operating characteristic (ROC) curve (defined as AUC) (13,14) and Harrell’s concordance index (C-index) (15) were applied to assess the discrimination. The AUC and C-index range from 0.5 to 1.0, with 0.5 suggesting the total chance and 1.0 suggesting a perfect discrimination ability (16). Calibration curves were performed to identify the consistency between the observed survival and the predicted survival.

The Cox analysis and chi-square test were conducted via SPSS 23.0 software (SPSS Inc, Chicago, IL, US). Survival and RMS package were used to develop and validate the predictive nomograms via RStudio software (Version 1.2.5001). Two-sided P<0.05 was considered to be statistically significant during the whole analysis process. 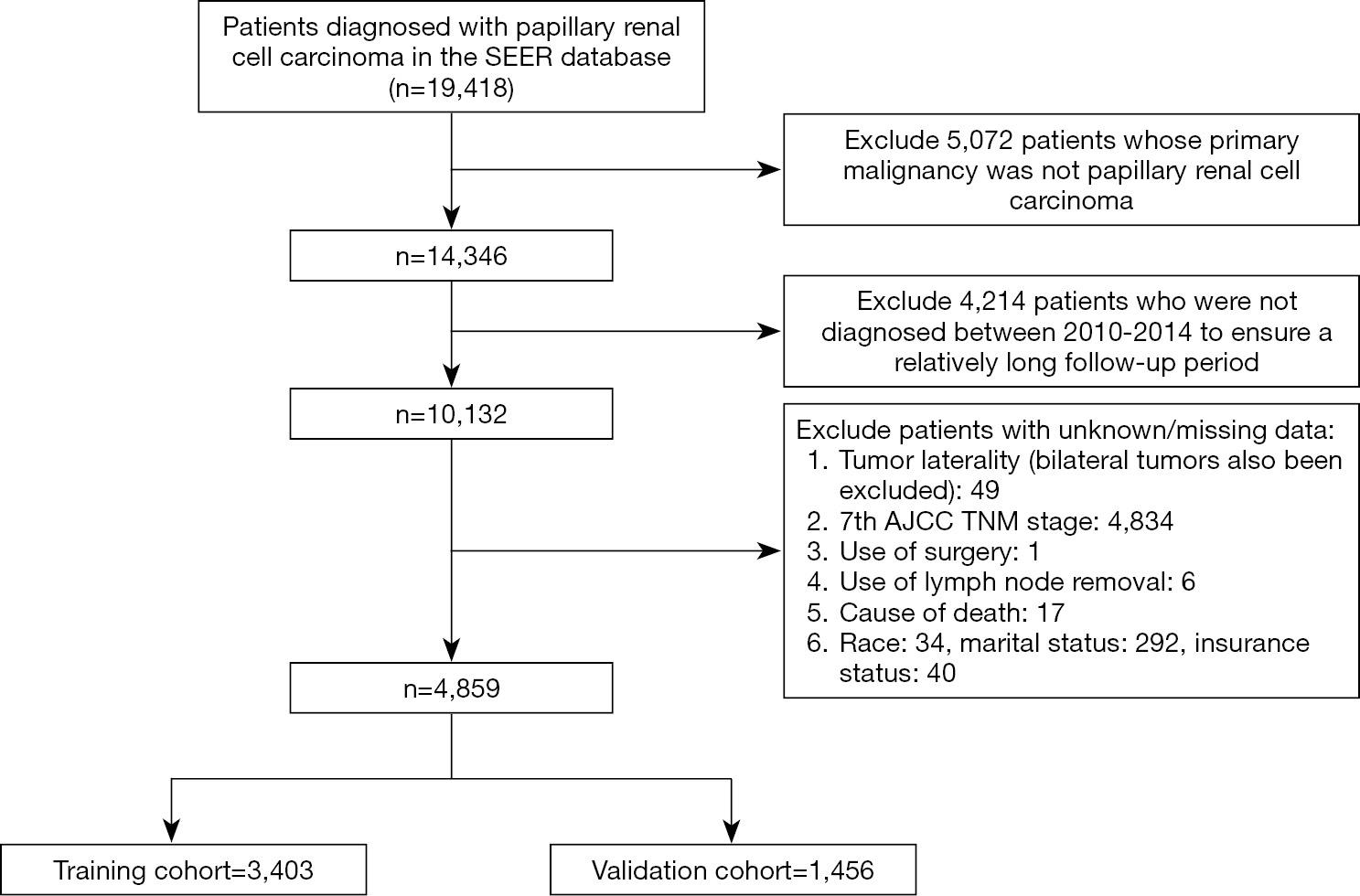 Figure 1 The study flow diagram of the selection process.

In the total cohort, most of the patients were male (75.06%), white (66.99%), and had a tumor in early T stage (76.29%) and without metastasis (95.76%). In terms of tumor laterality, no significant difference was detected between these two groups. Most patients had undergone surgery (95.93%) and a small number of patients had received chemotherapy (3.25%) and radiotherapy (1.29%). Detailed clinical information and comparisons between two groups was summarized in Table 1. There were no significant differences in race, age, sex, tumor laterality, TNM stage, insurance status, marital status, or use of surgery/chemotherapy/radiotherapy/LNR (all P>0.05). However, patients with radiotherapy in the training group were more than those in the validation group significantly (P=0.038). 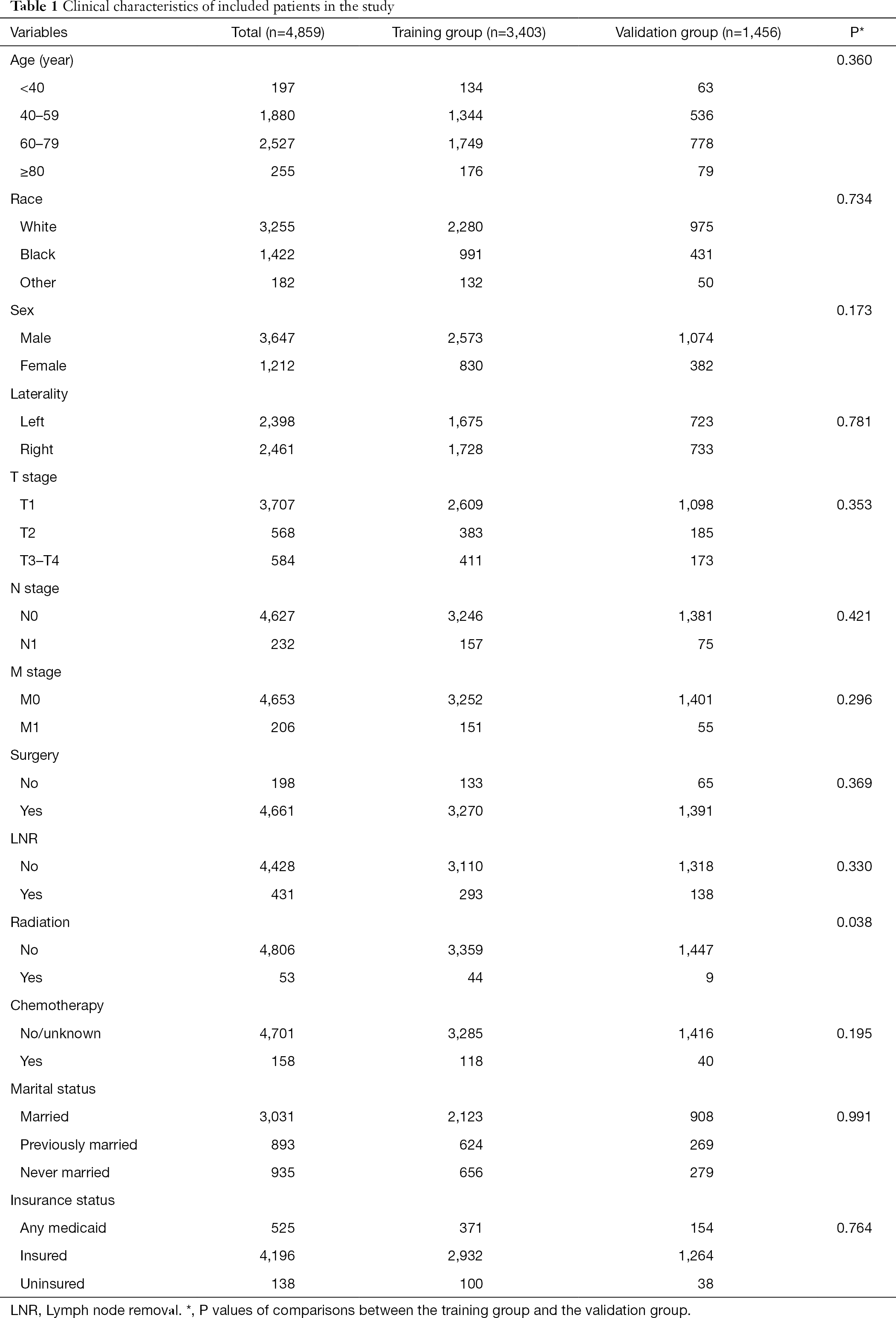 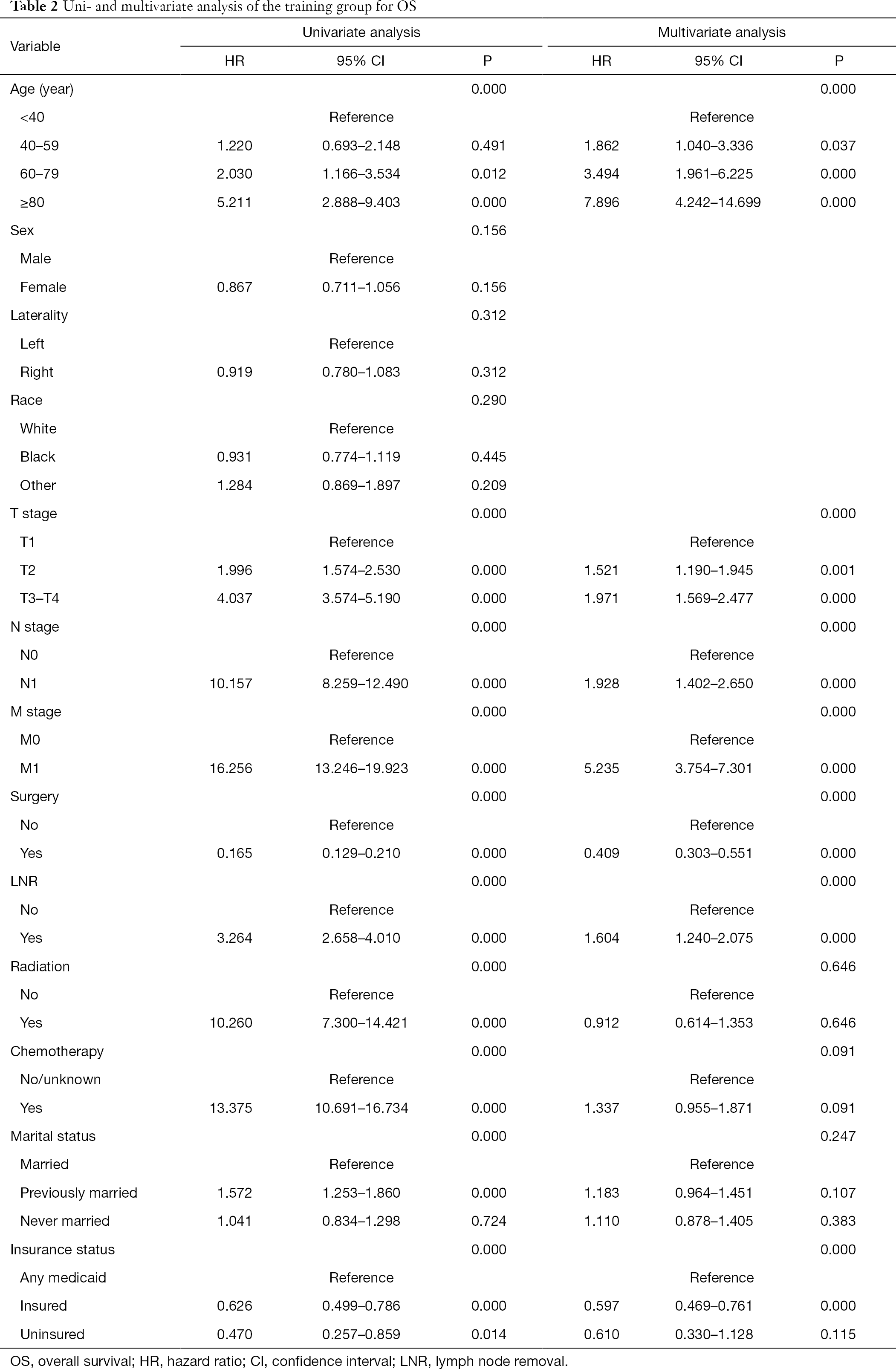 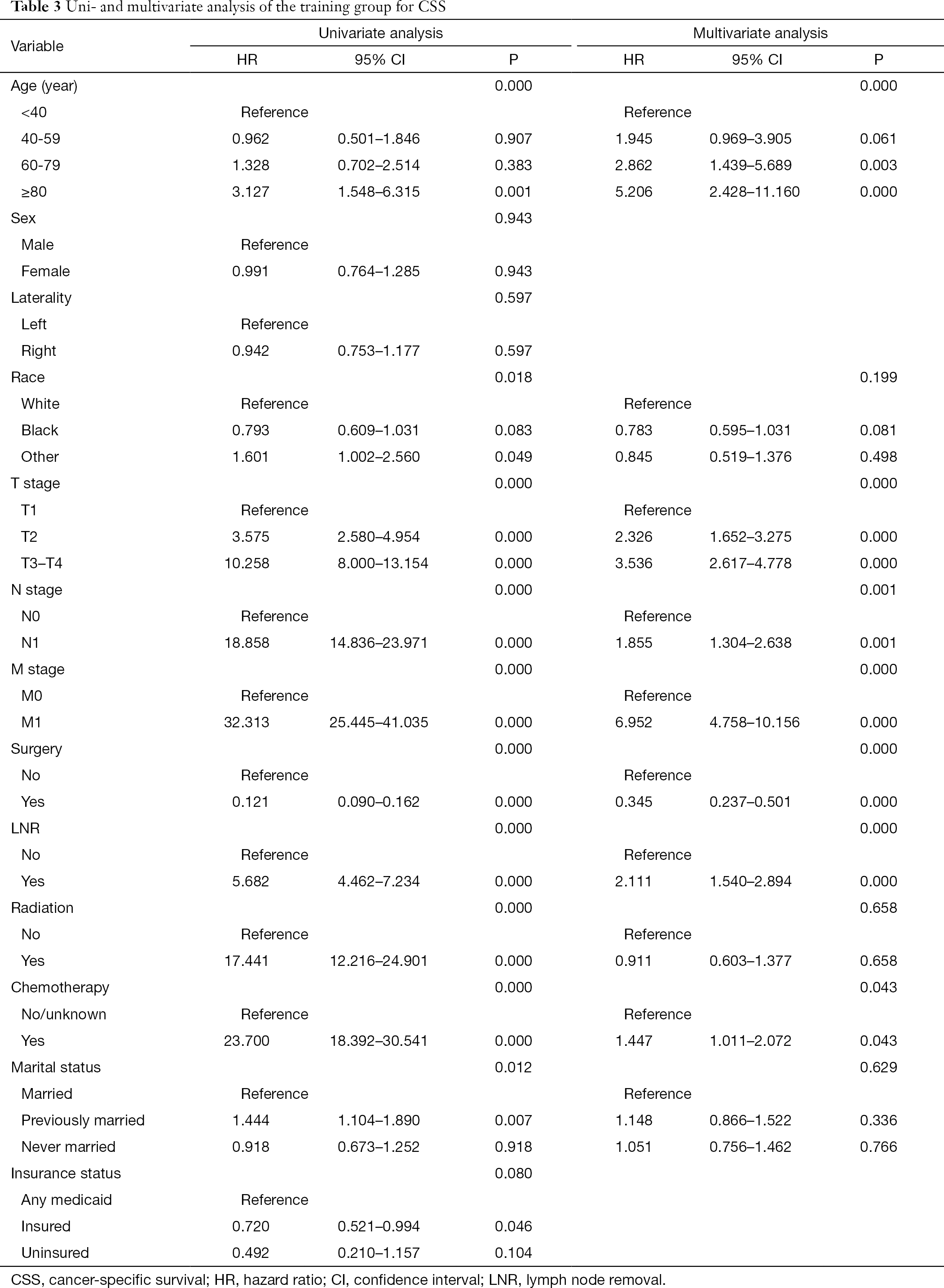 Based on the results of multivariate Cox analysis, nomograms to predict 3- and 5-year OS and CSS were conducted (Figure 4). A total point can be obtained by adding the score of each variable and the total point had its corresponding OS/CSS probabilities by the nomograms. 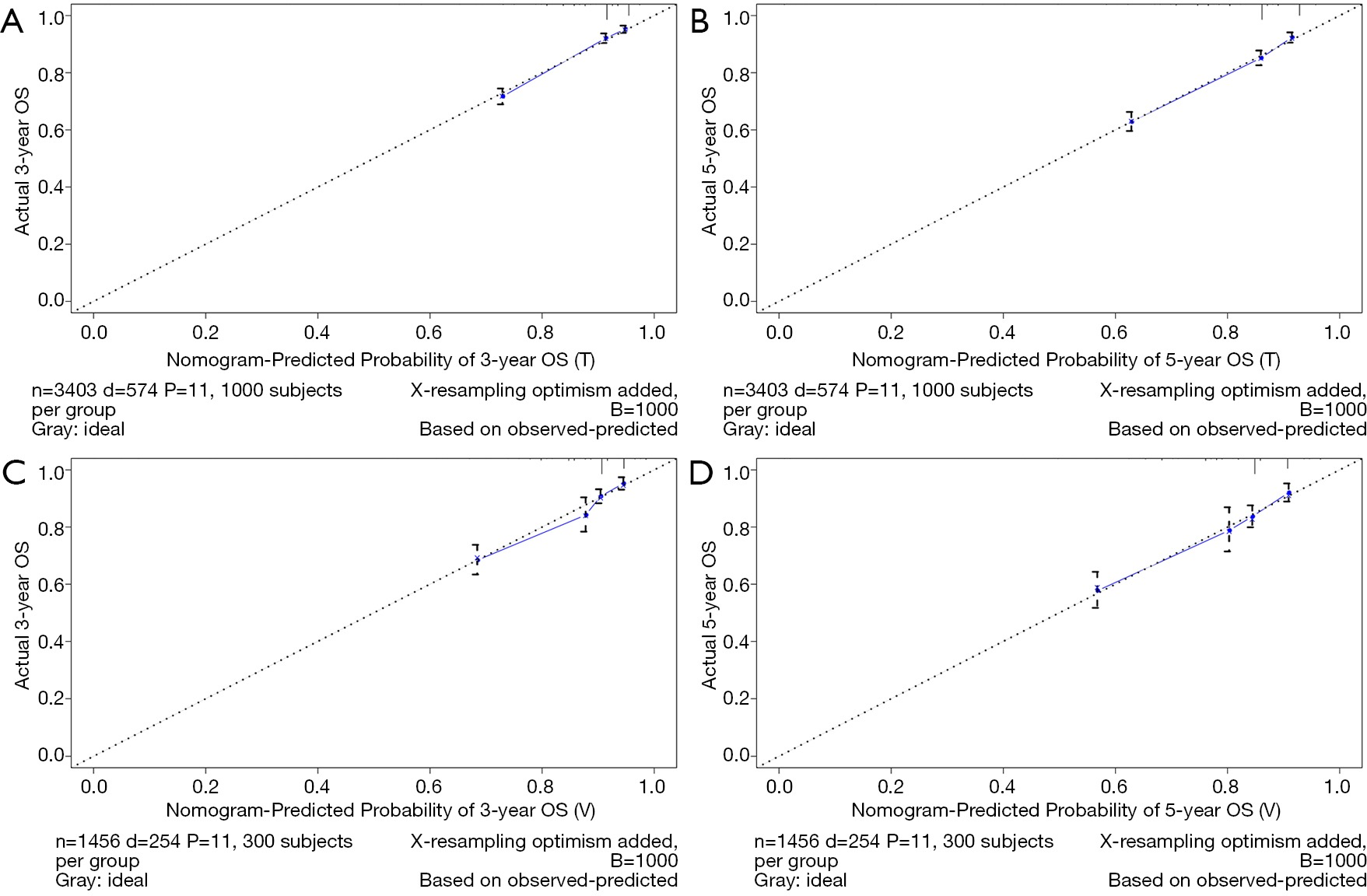 As mentioned above, RCC accounts for approximately 90% of kidney cancer (17). As one of the prominent subtypes of RCC, pRCC accounts for approximately 6–18% of renal tumors (17,18) and is the dominant histological subtype in pediatric RCC patients. Unfortunately, approximately 20% of pRCCs were found to be incidental, and with specific symptoms and prognostic factors (19,20). Therefore, it was crucial to determine related prognostic factors to improve the prognosis of patients with pRCC. Because the nomogram can predict survival risk by combining and quantifying the relative importance of various prognostic factors, it has been widely applied for clinical oncology assessment.

Our study demonstrated that age, T stage, N stage, M stage, surgery, LNR and insurance status were prognostic factors for OS. Moreover, age, T stage, N stage, M stage, use of surgery, chemotherapy and LNR were significantly associated with CSS. Nomograms were then developed based on these prognostic factors to predict 3- and 5-year OS and CSS rate in patients with pRCC. Both in the training and validation cohorts, the nomograms showed good predictive ability.

Chai et al. (21) demonstrated that age, T stage, N stage, M stage, and the use of surgery/chemotherapy played an important role in the prognosis of cancer patients, which was consistent with our results. In our study, patients over 80 years old and patients with higher TNM stages appeared to have lower OS and CSS rates. Moreover, the use of surgery may effectively reduce the risk of recurrence and death. In addition, we found that chemotherapy was a negative prognostic factor in our model. Conversely, various multi-center clinical trials have shown that patients with non-ccRCC had a good response rate to chemotherapy and had considerable efficacy (22-24). The adjuvant chemotherapy seemed to be a protective prognostic factor in their study. This might be attributed to the fact that considerable proportion of patients receiving chemotherapy were diagnosed with metastatic or advanced papillary cancer.

Furthermore, with regard to LNR, it seemed that lymph node ratio had become the primary prognostic factor for tumor outcomes and showed significant advantages in breast cancer, ovarian cancer, and cervical cancer (25-27). LNR might significantly reduce the risk of survival in tumor patients. Interestingly, our results provided different opinions, where LNR was a risk factor in our model. Meanwhile, several other studies also suggested that the role of lymph node dissection in RCC remains controversial (28-30). The most recent systematic review (28) concluded that although LNR could provide independent prognostic information, the current literature failed to recognize the therapeutic benefit in non-metastatic or metastatic RCC. We attributed the adverse value of LNR in our model to the truth that the lymph node metastasis may have occurred in these patients before the dissection, and thus showing a poor prognosis. Nevertheless, LNR may still play a role in some high-risk non-metastatic patients and a further prospective study was completely substantial.

Overall, our research had the following advantages. First, our research was based on the population-based cancer database (SEER database), which collected cancer cases from 18 regions of the US, effectively avoiding selection bias in single-center and small-sample studies. Secondly, our study was the first attempt to establish prognostic nomograms of pRCC, and further tested its effectiveness by modest validation and good calibration. However, some limitations should not be ignored. First, difference was detected in the use of LNR between two groups, which probably due to the poor number of people with LNR. Second, the cases included in the study were from retrospective cohorts. Larger prospective randomized controlled trials were needed to verify the accuracy of the model.

In conclusion, prognostic factors for pRCC patients were identified and further survival nomograms were developed to predict the 3- and 5-year OS and CSS probabilities, providing an effective tool to assess individualized survival rate of pRCC patients.

Conflict of Interest: All authors have completed the ICMJE uniform disclosure form (available at http://dx.doi.org/10.21037/tau-19-807). XL serves as an unpaid Section Editor of Translational Andrology and Urology from Oct 2019 to Dec 2021. The other authors have no conflicts of interest to declare.

Ethical Statement: The authors are accountable for all aspects of the work in ensuring that questions related to the accuracy or integrity of any part of the work are appropriately investigated and resolved. Use of SEER is exempt from Institutional Review Board.