Over the past few decades, temporal trends have demonstrated noteworthy declines in overall male reproductive health (1). This claim is largely evidenced by reduced sperm counts, increased abnormal sperm morphologies and sperm motility as well as decreased testosterone levels in men (2-5). While these findings may be attributed to genetic, neoplastic or socioeconomic factors, epidemiological studies have revealed that environmental etiologies for low testosterone and abnormal semen analyses also play a major role. Furthermore, research on endocrine disruptors have suggested that current modern lifestyles are increasingly associated with higher risks and persistent exposures to numerous endocrine-disrupting toxins, which may further aggravate the phenomenon of male infertility (6).

The mechanism by which environmental toxins affect semen quality and hormone levels have been described. For example, heavy metals such as cadmium, arsenic and lead, have been known to disrupt the physiology of Sertoli cells, resulting in impaired spermatogenesis and imbalanced hormonal levels (7). Moreover, plasticizers such as bisphenol A (BPA) are endocrine disruptors that have been known to affect steroidogenesis via the adverse binding of endocrine receptors (8,9). While the effects of many endocrine disruptors have been well studied, the effect of polychlorinated biphenyls (PCBs) on the male reproductive axis has yet to be clearly elucidated.

PCBs are a category of chlorinated aromatic hydrocarbon compounds manufactured for use in various commercial and industrial applications. Due to its chemical inertness, heat stability and electrical insulating properties, PCBs are predominantly used as coolants and lubricants in electrical equipment, but is also utilized for the manufacturing of plastic and rubber products as well as pigments and dyes (10). PCBs are highly lipophilic and they biodegrade slowly which enables these chemicals to bioaccumulate within the food chain. Thus, the major route of PCB exposure in humans is through the ingestion of contaminated food, such as fish, and has relevant implications to human health (11).

Peak production of PCB occurred in the early 1970s, with over 1.5 million pounds manufactured prior to 1977 and production being banned in the US after 1979. Current levels of environmental PCB exposure in America can be estimated by looking at serum PCB levels collected by the Centers for Disease Control and Prevention (CDC). This data is pooled, and we can estimate recent environmental exposures by looking at the population aged 12–19, as serum PCBs are a reflection of cumulative past exposure. If we look at the data for PCB153, the mean levels have been between 2.22 and 7.63 from 1999 to 2014 (12). As PCB and its metabolites have been recognized as potential health hazards, it is important for us to understand its implications on male fertility or the endocrine-related adverse effects associated with PCB exposure.

Utilizing the National Health and Nutrition Examination Survey (NHANES) database, we sought to examine the effect of PCB153 exposure on serum testosterone levels as an independent variable, and in conjunction with other clinical, demographic and biochemical factors. We hypothesized that higher serum levels of PCB153 in men are associated with lower levels of testosterone, potentially suggesting the detrimental effects of PCB as an endocrine disruptor in humans.

To conduct this cross-sectional study, we utilized the NHANES database, which is a population-based, research survey program conducted by the National Center for Health Statistics (NCHS) of the CDC (Atlanta, USA). This database is designed to analyze nationally representative samples of noninstitutionalized respondents in the United States. Written informed consent was obtained from all participants prior to completing the NHANES, and all data was de-identified by the NCHS before being made publicly available. Our study inclusion criteria were limited to male participants over the ages of 18 among the years 1999–2000 and 2001–2002 with readily available testosterone and PCB153 levels. Exclusion criteria were participants with serum testosterone <50 or >1,000 ng/dL, incomplete clinical data or outliers, which was defined as more than three standard deviations from the mean.

The primary outcome studied is the independent effect of serum PCB153 on testosterone levels. Additionally, we examined the effect of PCB153 on testosterone within the context of a multivariable model. Biotin-Streptavidan binding assay was performed for the in vitro quantitative determination of testosterone in human serum and plasma (13). Conversely, quantitative levels of serum PCB153 was measured using gas chromatography/isotope-dilution high-resolution mass spectrometry (GC/ID-HRMS) (14).

Demographic variables include age, race, annual family income, level of activity and body mass index (BMI). Other clinical characteristics included in the analytical model were levels of sex hormone binding globulin (SHBG) and past medical history of diabetes, coronary artery disease (CAD), stroke or previous cancer diagnosis. Race was categorized into non-Hispanic white, non-Hispanic black, Hispanic and others; annual family income was categorized into $0–19,999, $20,000–44,999, $45,000–74,999 and ≥$75,000; level of activity was categorized to mostly sitting, standing and walking, lifts light loads and climb stairs, lifts heavy loads and unknown. These categories were utilized as defined by the NHANES database. Aside from age, BMI and serum laboratory levels which were analyzed continuously, all other variables were analyzed categorically.

Categorical variables were presented as absolute values and frequencies, while continuous variables are reported as medians and interquartile ranges [25–75]. Using a univariate and multivariate linear regression model, we evaluated the association between each independent variable to serum testosterone levels. Variables were selected based on data availability and they were chosen to help characterize patients from a clinical and demographic standpoint. Variables that have been suggested to be correlated with serum testosterone levels were also included. Regression coefficients, standard errors and p-values were determined with serum testosterone as the dependent variable. All statistical tests with a P value of <0.05 were considered statistically significant. Statistical analyses were performed using SPSS® statistical software version 24.0 (Chicago, USA). 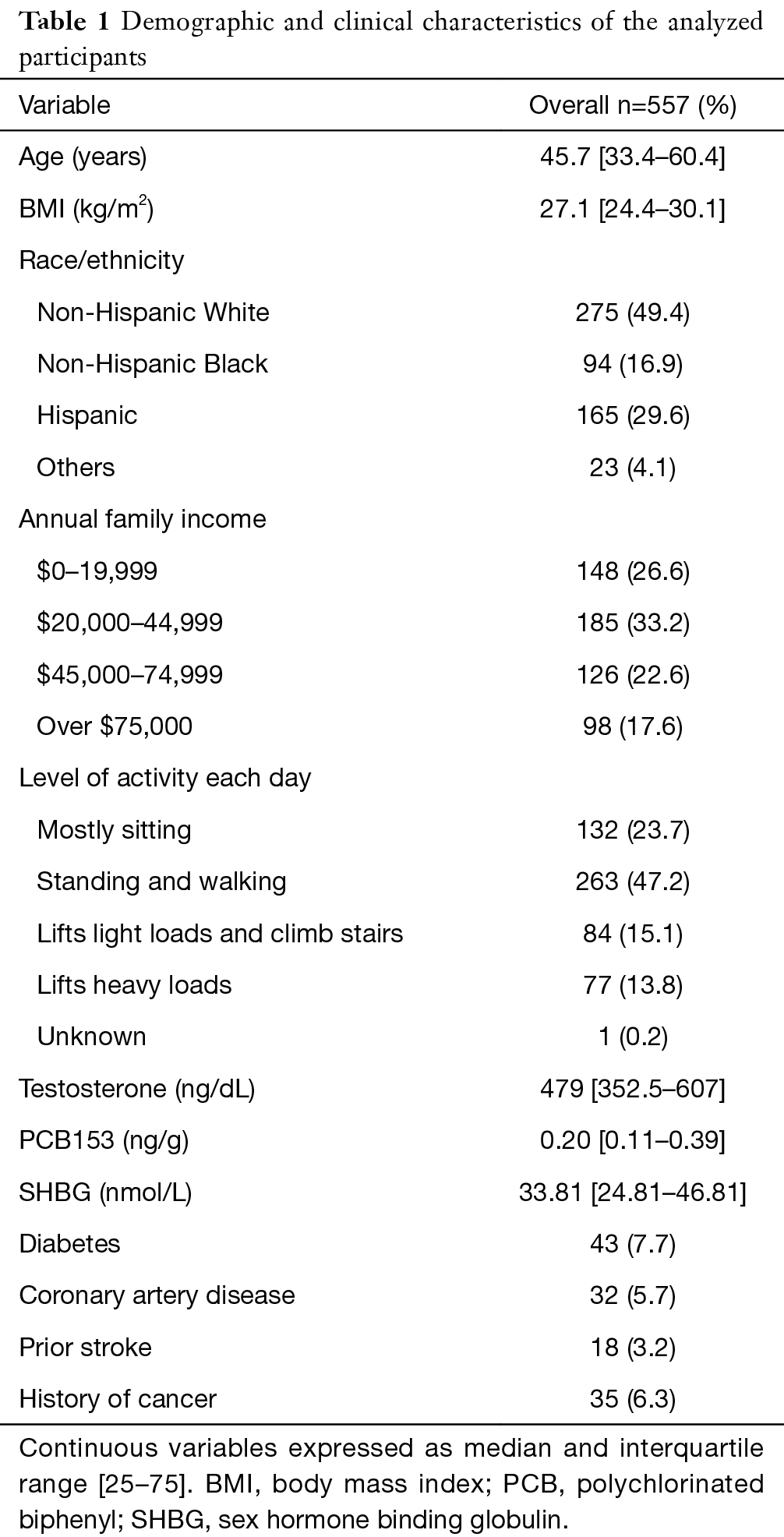 Although several studies have assessed and reported inverse associations between environmental PCB exposure and circulating testosterone levels, majority of these studies were performed within small patient cohorts or animal models only. As such, in our study, we utilized a large survey database to assess the association between serum testosterone and exposure to one specific PCB, PCB153. We hypothesize that the presence of environmental pollutants significantly decreases testosterone levels. Herein, we report a statistically inverse correlation between serum PCB153 and total testosterone levels (estimate ‒179.67, P<0.001) that was no longer significant following adjustment for patient age, BMI and other clinical characteristics. These findings were similar to previously published results whereby serum PCB concentrations were inversely associated with SHBG-bound testosterone, but not total or free testosterone (15,16). As such, aside from the moderate sample size, we believe that PCB exposure may affect steroidal binding of testosterone which subsequently affects the bioavailability of free testosterone. Unfortunately, albumin, free testosterone and SHBG-bound testosterone levels were not readily available within the NHANES database, which may pose as a limitation to our analysis (17).

There have been several other studies reporting the relationship between testosterone and serum PCB153, albeit inconsistently. The large majority of studies investigating PCBs use a sum of common environmental PCBs, which usually includes PCB153. A study by Cao et al. comparing maternal PCB serum concentration and infant hormonal levels found that higher maternal PCB levels were associated with lower levels of testosterone and estradiol in babies (18). In other human studies, Vitku et al. reported that environmental summed levels of the common PCB congeners (PCB 153, 180, 138 and 118) had a strong negative correlation with serum androgen levels (19). Additionally, two studies in Native American men found a similar negative correlation between PCBs and serum testosterone levels. In 2014, Schell et al. studied this effect in adolescents, showing that the summed total serum level of persistent PCBs, including PCB153, had a greater relationship with serum testosterone compared to non-persistent PCBs (20). Goncharov et al. found a significantly inverse relationship between serum PCB153 specifically and serum testosterone levels. Their team also found this relationship with PCBs 74, 99, and 206. Additionally, they found that their study population had higher serum concentrations of PCB153 than any other PCB congener (21). Conversely, a study in 2002 found only weak associations of serum PCB levels between testosterone concentration and testicular sizes in boys at 7 and 14 years of age (22). Aside from that, experimental data on animal models have also revealed similar findings on PCB exposure with implications of decreasing hormonal levels associated with PCB. For example, Hany et al. demonstrated that male rodent offspring with maternal exposure to PCB showed markedly reduced serum testosterone levels and reduced testicular weights, while Kaya et al. found that female offspring exhibited dose-dependent decreases of testosterone and estradiol following prenatal PCB exposure (23,24).

When exposed in combination with other environmental agents such as diethylhexyl phthalate, another plasticizing component, PCB153 has been shown to demonstrate similar adverse declines on semen quality in a dose-dependent fashion (25). This more likely simulates a real-life scenario whereby a complex mixture of chemicals are exhibiting synergistic, antagonistic or additive effects on overall male fertility. Due to the linked effects of phthalates on Sertoli and Leydig cell dysfunction, we have reason to believe that the high prevalence and coexistence of these substrates with PCB153 may potentially lead to similar disruptions in the production of testosterone (26).

There are several other previously described mechanisms for low testosterone levels secondary to endocrine disruption (18,19). Firstly, there is reduction of steroidogenic enzyme activity within Leydig cells, subsequently leading to decreased biosynthesis of androgens. Second, there is a decrease in pituitary luteinizing hormone (LH) secretion secondary to disruption of the hypothalamic-pituitary-gonadal axis. A study by Lyche et al. on controlled animal models found that PCB153 exposure significantly decreases LH concentration but is not associated with changes in follicle stimulating hormone (FSH) or prolactin levels. As such, the low LH levels indirectly impairs testosterone production via decreased stimulation of testicular Leydig cells (27). Lastly, the effects of organochlorines, such as PCB, on androgens in animals have been shown to reduce pituitary responses to low androgen levels (28). The former two proposed mechanisms compromise primary Leydig cell function which involves the production and secretion of testosterone, while the latter mechanism reduces testosterone by attenuating the negative feedback inhibition within the hypothalamic-pituitary-gonadal axis (29,30).

Our study is not without limitations. Firstly, this study is cross-sectional in nature and relies on retrospective data with its inherent biases. Thus, beyond associations, causality cannot be ascertained. Next, only total serum testosterone was readily available within the NHANES database and other hormones, such as FSH and LH, or specific forms of testosterone, such as free or bound testosterone levels, could not be included in our analysis. Apart from that, the data used for this study is from 1999 to 2002, as the unpooled data for PCBs on NHANES is only available prior to 2002. The NHANES database is also, unfortunately, not a nationally representative sample, and no sample weights are available. Another weakness is that, while the objective of this study was to investigate the association between PCB153 and serum testosterone levels, the fact that the other PCB congeners were not included in the study may be seen as a limitation. Additionally, the normal reference range of PCB have yet to be established in the literature and clinical exposure sufficient for clinically significant change in serum PCB levels are unknown. Nevertheless, a major strength of this study is the utilization of the NHANES survey database which has a robust and standardized methodology for laboratory measurements.

In this population-based analysis, we report that PCB153 appears to be associated with decrease in serum testosterone levels in a representative sample of US adults. This study represents by far the largest cross-sectional study showing the associations between environmental PCB exposure and serum androgens. Future research is necessary to assess variations of free and bound testosterone with PCB exposure as well as to ascertain the exact mechanism by which PCB affects testosterone production.

Ethical Statement: The authors are accountable for all aspects of the work in ensuring that questions related to the accuracy or integrity of any part of the work are appropriately investigated and resolved. Written informed consent was obtained from all participants prior to completing the NHANES, and all data was de-identified by the NCHS before being made publicly available.