Effect of estradiol on penile erection: a cross-sectional study

Erectile dysfunction (ED) is a common problem affecting more than 150 million men worldwide. ED is defined as the persistent inability to attain an erection sufficient to permit satisfactory sexual intercourse (1). A meta-analysis consortium study reported that ED was present in nearly 17% of all European males in 2004 and that it will affect 322 million European males by 2025 (2,3). ED has biological, psychological, and social effects on the quality of life of men and their sexual partners (4). ED can cause frustration, anxiety, and depression in men and therefore can affect job performance, social activities, and family stability (5-7).

ED may result from psychological, neurologic, hormonal, arterial, or cavernosal impairment or a combination of these factors (8,9). This study was performed to investigate the relationship between estradiol (E) and ED.

Estradiol is an important sex hormone and an important feedback regulator of the hypothalamo-pituitary axis and the serum levels of testosterone (T), luteinizing hormone (LH), and follicle-stimulating hormone (FSH). Estradiol biosynthesis is initiated by the synthesis of the 19-carbon steroid hormone pregnenolone from cholesterol. This compound is converted into testosterone and then into the estrogens estrone and 17b-estradiol. Estradiol biosynthesis is catalyzed by aromatase, a microsomal member of the cytochrome P450 superfamily that introduces the characteristic phenolic ring. In premenopausal women, the ovaries are the principal source of 17b-estradiol, which functions as a circulating hormone to act on distal target tissues. In men and postmenopausal women, when the ovaries cease to produce estradiol, 17b-estradiol is produced in several extragonadal sites (e.g., adrenal glands, adipose tissue) and acts locally as a paracrine factor (10). Estradiol exerts most of its biological actions via estradiol receptors (ERs) (11). ERs are ligand-activated transcription factors belonging to the nuclear hormone receptor superfamily. In human (12,13) and animal (13,14) penile tissues, ERα is abundantly expressed. An excess of estradiol has a detrimental effect on many facets of male health and has direct or indirect effects on male erection (15).

This study included 135 patients with ED, based on scores of ≤21 on the International Index of Erectile Function-5 from January 2012 to November 2017 at our Andrology Clinic at the Department of Urology in the Second Hospital of Shandong University, Jinan, China. The clinical study was approved by the Institutional Ethics Committee of the Second Hospital of Shandong University. All participants gave written informed consent to participate in the study. Men were included in the study if they had an ED longer than 3 months’ duration. We excluded patients who had (I) a history of neurologic disease, (II) genital or spinal cord injuries, (III) morbid obesity, (IV) use of drugs that affecting erectile function, (V) severe heart disease, (VI) bleeding disorders, (VII) penile fibrosis, (VIII) hypertension, (IX) diabetes, (X) hypogonadism, and/or (XI) abnormal androgen profile.

Nocturnal penile tumescence tests were performed in all patients using the Rigiscan device (Timm Medical Technologies, Inc., Eden Prairie, MN, USA) (20-22). To reduce interference with sleep quality, the device was applied to each patient’s penis for 3 consecutive nights; changes in penile tumescence and radial rigidity were recorded throughout each night. To ensure accurate readings, patients were asked to take measures to avoid insomnia including managing caffeine or alcohol intake and evacuating their bladders before going to sleep. After each monitoring period, all data were transferred to a personal computer and analyzed by the Rigiscan device (Timm Medical Technologies). The software recognized an erectile event if there was a 20% increase in loop circumference of ≥3 min in duration (23). We recorded erection time and rigidity. All patients had normal nocturnal erectile activity, which comprised at least one erection with the rigidity of ≥60% at penile tip or base, lasting longer than 10 min as documented by the Rigiscan. We considered rigidity of ≥60% to be an effective erection. 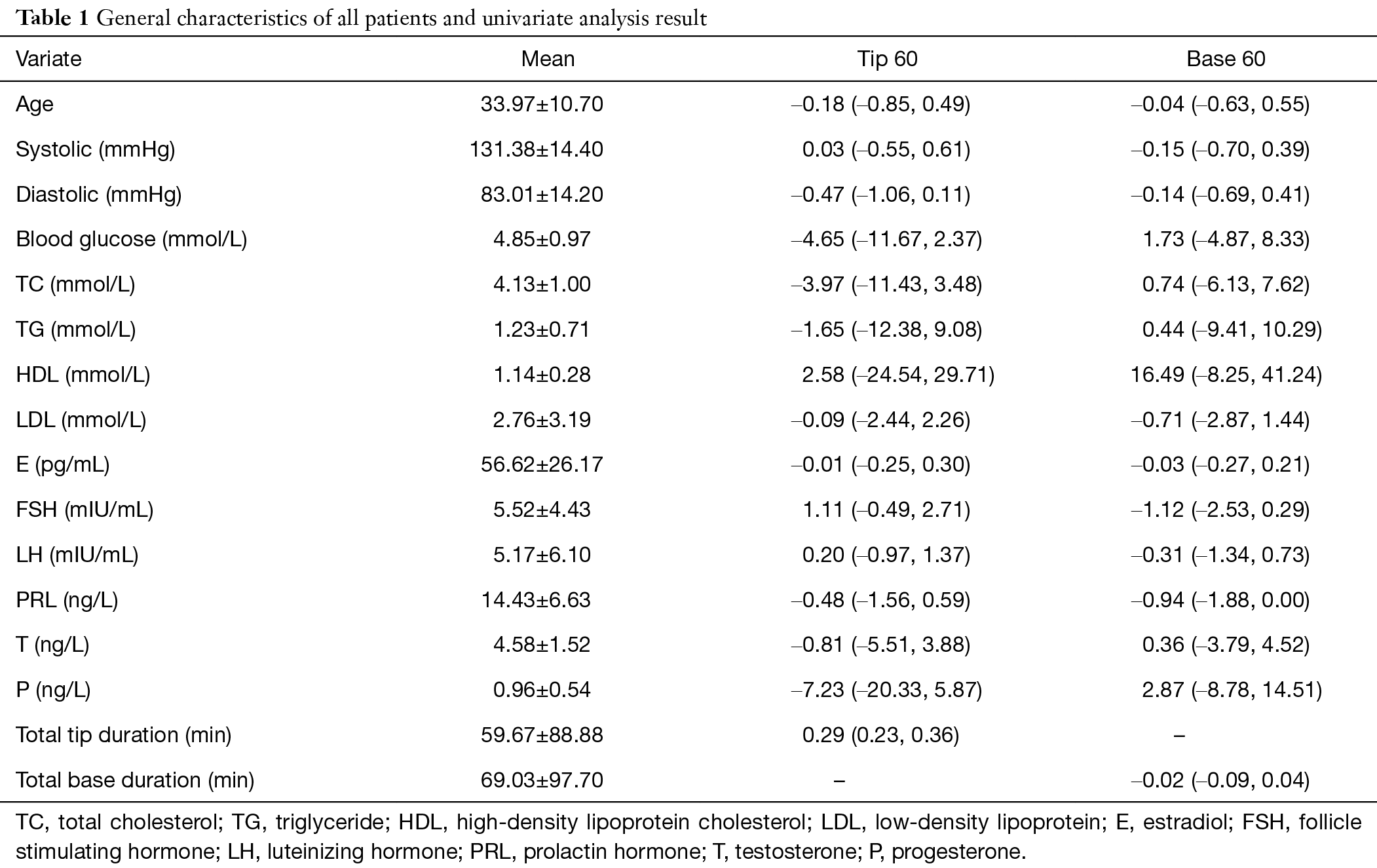 Table 3 Multiple regression analysis result of the base
Full table 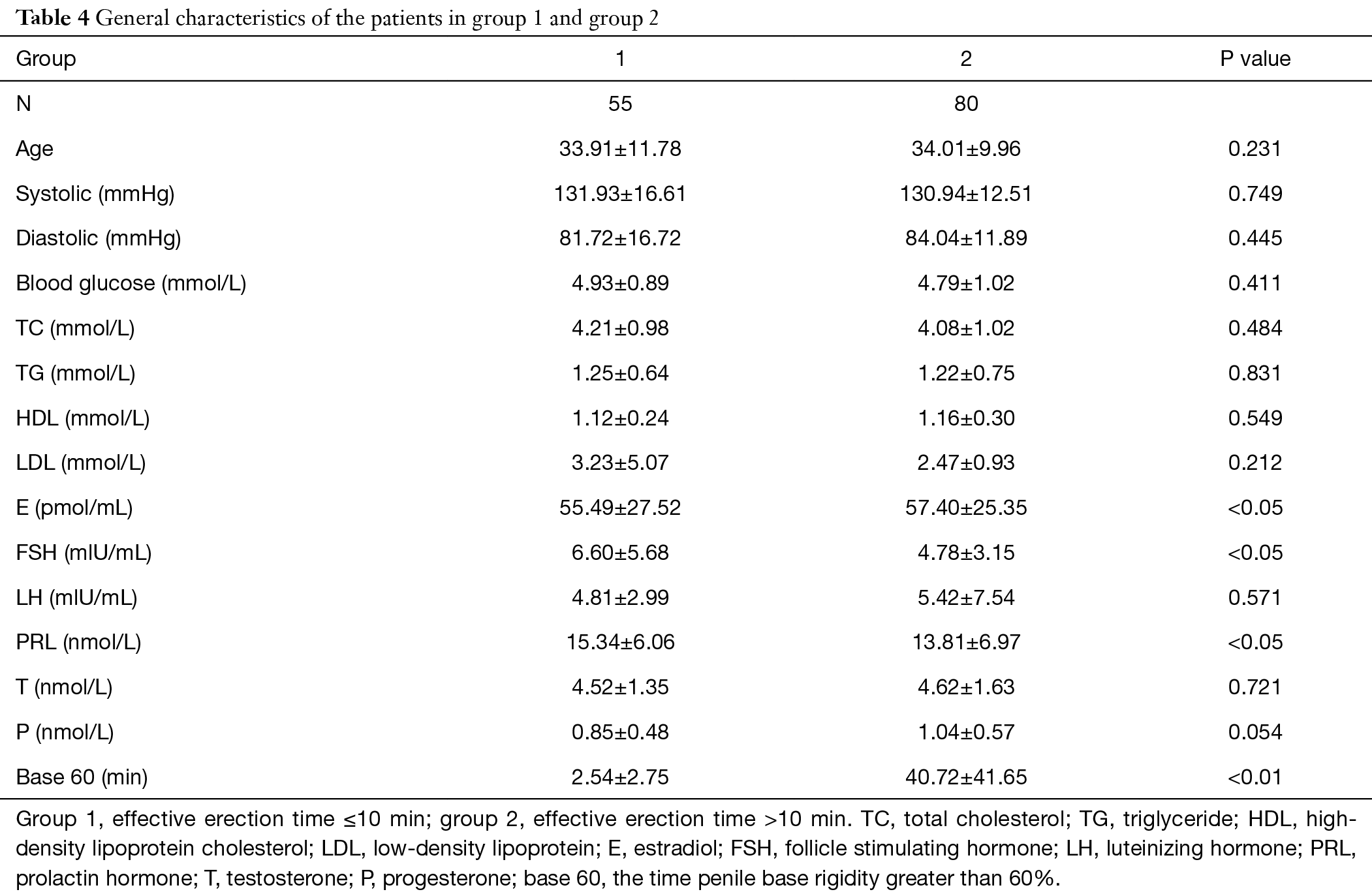 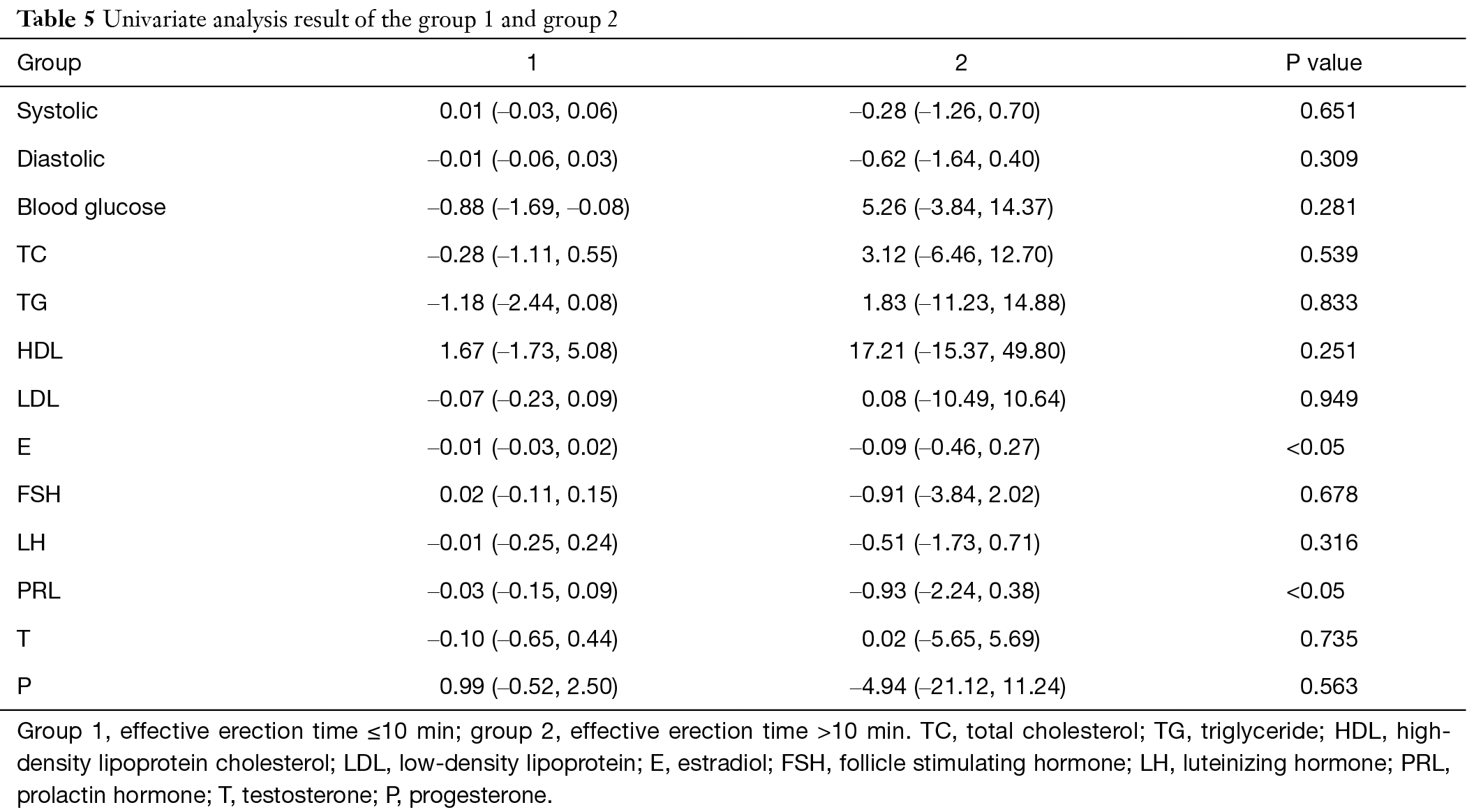 Table 6 Multivariate analysis result of the base
Full table

ED is a common condition which interferes with quality of life of affected persons. The World Health Organization states that sexual well-being is essential to the physical and emotional health of individuals, couples, and families and the social and economic improvement of countries.

Erectile function is multifaceted with a necessary combination of nerve, vessel, and endocrine actions that work together to produce subsequent penile structural changes in a coordinated fashion. Smooth muscle, endothelium, and cell-to-cell communications via gap junctions are essential to erectile function, and thus pathology in any one of these can lead to ED (24). The pathophysiology and clinical role of testosterone in erectile function have been studied extensively (25,26). Androgens are necessary for the penis to grow and develop, and also contribute to the physiology of erections. Animal models suggest multiple tissue targets for testosterone action to regulate erectile function (27).

Estradiol in animal models impedes normal penile development, and can cause the reduced bulk of the bulbospongiosus muscle, reduction of the spaces in the corpus cavernosum, and an accumulation of fat cells within existing spaces that lead to ED in adult life. Notable studies of this phenomenon reported exposure limited to early development, with rats that were exposed to exogenous estradiol after day 12 of life showing no structural abnormalities (28). In addition to the influence on the structure, estradiol has a considerable influence on penile vasculature. Estradiol can increase venous vascular permeability via vascular endothelial growth factor (VEGF) and has a detrimental effect on erectile function through increased venous leakage (29).

Increased severity of ED, assessed with the International Index for Erectile Function (30), in men with low testosterone levels is worsened with high estradiol levels implying an additive effect of the two hormones (31). However, while low testosterone increases the incidence of ED, elevated estradiol levels do as well (29). This point, coupled with the fact that the corpus cavernosum vasculature and urothelium have extensive ERs, significantly more than other steroid receptors, particularly around the neurovascular bundle, suggests the presence of ED mechanisms separate from, and in addition to, central testosterone inhibition (32,33).

Estradiol also acts at the level of the brain to influence erectile function. Estradiol inhibits the hypothalamus-pituitary axis and subsequently FSH and LH, thus reducing circulating testosterone (34-36). Testosterone is necessary for normal erectile function, and low testosterone produces decreased firmness, ability to maintain erections, and number of erections achieved, all of which are improved with testosterone administration (16,17). The administration of exogenous estradiol can inhibit the effect on testosterone production and cause ED. This has been demonstrated in animals, where exogenous estradiol administration not only reduced testosterone levels but also diminished the structural integrity of the corpus cavernosum with less viable smooth muscle and an increase in connective tissue (18). Similarly, in humans taking estradiol, there is a reduction in spontaneous erections and nocturnal penile tumescence correlating with a reduction in testosterone levels (37).

Evidence from animal models demonstrates this independent role of estradiol in erectile function. Stimulation of ER receptors has been shown to have anti-apoptotic effects on endothelium, and the loss of this function in the crura was associated with ED (38). Similarly, when ED was induced by high estradiol levels, testosterone therapy did not help restore erections as long as the estradiol milieu was maintained (39). While animal models have not provided conclusive evidence, and the pathophysiology of erectile function is more complex than simple hormone difference, these findings provide an interesting and compelling initial step in elucidating estradiol’s separate and direct effect on ED outside of its role in testosterone suppression.

Past studies have demonstrated that estradiol negatively affects erectile function (16-18). However, to our knowledge, few studies have shown a relationship between E and erections at the penile tip or penile base. Also, there are no uniform standards for normal erections, as determined by Rigiscan analysis at present. In our present study, univariate analyses confirmed that E did affect male erectile function. It is acknowledged that estradiol can affect erection function through an inhibitory effect on testosterone production and a decrease of circulating testosterone. However, we have shown, for the first time, that E levels are not strongly associated with penile tip erection duration, and there is a more obvious correlation between the E levels and penile base erection duration by contrast (Figure 1). Despite this, we do not know what causes the difference between the penile tip and the base. This discrepancy may be explained by internal anatomical differences or differences in PDE5 distribution, as nitric oxide (NO) mediates the relaxation of the vascular smooth muscle of the arteries of the corpus cavernosum and the trabeculae in order to facilitate penile erection. Furthermore, the phosphodiesterase (type) 5 (PDE5) can hydrolyze cyclic guanosine monophosphate (cGMP) in vascular and trabecular smooth muscle into GMP. Activation of PDE5 terminates NO-induced, cGMP-mediated smooth muscle relaxation and restores the basal smooth muscle contractility and penile flaccidity, although, unfortunately, we have found no sources referencing this. This deficiency will prompt our further research in clarifying this issue (27).

Our multivariate analysis showed that E level was independently associated with Tip 60 or Base 60, after adjusting for some confounders. Therefore, we concluded that the penile base was more indicative than the penile tip for assessing the effect of E on erectile function, and we performed further analysis of the base group.

By studying the Base 60 of Group 1 and Group 2 in, we could infer that the effects of estradiol on the same position of the penile were different as the effective erection changes. In the univariate analysis and multivariate analysis, Group 2 showed a greater change than Group 1 in Base 60 when E increased. We suppose that the longer the effective erection lasted, the more obvious the effects of estradiol were. We will do further experiments to verify this hypothesis in the future.

We suggest that the differences between the penile tip and penile base should be considered when we study the relationship between penile ED and estradiol using Rigiscan analysis; base data comprise a more reliable reference set, which will enable more effective and accurate research.

This study had several limitations. First, there were relatively few subjects and a low number of variables, which might have affected our results. Also, normal E ranges might vary slightly among different laboratory devices, and should therefore be adjusted accordingly. A series of comprehensive blinded validation studies are warranted to confirm the clinical effects of E.

In conclusion, we confirmed that E inhibits erectile function. We also found that the penile base is more sensitive to E than the penile tip. In addition, for penile base effective erections that last longer than 10 min, E has a more obvious inhibitory effect on penile base erection.

Ethical Statement: The authors are accountable for all aspects of the work in ensuring that questions related to the accuracy or integrity of any part of the work are appropriately investigated and resolved. The clinical study was approved by the Institutional Ethics Committee of the Second Hospital of Shandong University [KYLL-2019(LW)012]. All participants gave written informed consent to participate in the study.