Infertility has become a major public health problem. According to the World Health Organization (WHO), it affects approximately 15% of the couples that are at the age of conceiving a child and approximately 50% of male subjects (1). Several different causes of male infertility have been proposed with semen abnormalities caused by spermatogenic disorders being the most common. Major semen abnormalities are oligospermia and asthenospermia and consequently oligoasthenospermia is the main disorder that is targeted therapeutically for male infertility (2,3).

The pathogenesis of oligospermia and asthenospermia is very complex and it includes chromosomal abnormalities, obstruction of spermatic ducts, genital tract infections, structural abnormalities in the sperm and semen abnormalities (4). In recent years, a large number of chromosomal malformations and individual gene mutations that can lead to male infertility have been identified (5). Oligoasthenospermia is caused by genetic factors in approximately 21–29% patients. Chromosomal abnormalities account for only a small number of these factors, while the involvement of pathogenic genes remains unclear for the majority of the patients (6). Based on knockout mouse studies, 388 genes have been associated with sperm abnormalities, leading to oligospermia and even azoospermia in mice (7), which in turn suggests that genetic mutations are an important cause for sperm dysfunction. In recent years, different studies have demonstrated that DNA methylation abnormalities and oxidative stress in sperms are important factors involved in male infertility (8-11). Folic acid is an important methyl donor in the human body and therefore genes associated with the folic acid circulation pathway have become the research focus for male infertility (12-14). 5,10-methylenetetrahydrofolate is transformed to 5-methyltetrahydrofolate by 5,10-methylenetetrahydrofolate reductase (MTHFR) in the folic acid metabolism pathway (15). The gene that encodes this enzyme is considered a significant contributor to diseases associated with folic acid metabolism, since mutation of C to T in the 677 locus of this gene can cause a decrease in the enzymatic activity of MTHFR. This decrease leads to various disorders in the folic acid metabolic pathway, including reduction in methyl donors and an increase in the homocysteine (Hcy) levels (16,17). Therefore, this gene has become a predisposing factor for male infertility (14,17-20). The present prospective study analyzed the effect of the MTHFR polymorphism on folic acid supplementation in 167 cases with idiopathic male infertility. The association between MTHFR polymorphisms and male infertility was explored in a Chinese Han population. Moreover, the effects of folic acid supplementation on sperm quality were investigated.

The present study was approved by the Ethics Committee of the International Peace Maternal and Child Health Hospital of the Shanghai Jiao Tong University (No. 17-0012).

A total volume of 2 mL venous blood was extracted and placed in EDTA anticoagulant blood collection tubes, whereas 200 µL was used for genomic DNA extraction. Genomic DNA was extracted using the Blood Genome Extraction Kit (Shanghai BaiO Technology Co., Ltd., Shanghai, China) following the manufacturer’s instructions. The PCR amplification was conducted as follows: the MTHFR (C677T) gene detection kit (Shanghai BaiO Technology Co., Ltd.) was used for PCR amplification and sequencing. The reaction contained 5 µL reaction solution A, 18 µL amplification solution and 2 µL genomic DNA of the sample. The amplification program used was the WarmStart and the PCR amplification conditions were as follows: 94 °C for 5 min, 94 °C for 30 s, 56 °C for 40 s and 72 °C for 40 s. The program included 35 cycles and the last cycle was extended for 5 min. A total of 10 µL PCR reaction product was subjected to hybridization. Patient genotyping was performed by the biochip reader.

Fresh blood samples were collected and centrifuged at 3,000 r/min for 6 to 10 min. The serum was separated and serum Hcy levels were measured using a Hitachi 7180 automated biochemical analyzer. A two-point rate assay was used and the main wavelength was set at 340 nm. The secondary wavelength was set at 405 nm. The serum was reacted at 37 °C for 10 min. A two-point linear correction was used as the calibration method.

The categorical data related to the distribution and frequency of the gene polymorphisms were assessed by the χ2 test in order to analyze the differences between groups. The continuous data related to Hcy levels and sperm density were represented by the mean ± standard deviation. The data that satisfied the normal distribution and the variance homogeneity were analyzed by the T test or the variance analysis in order to assess differences between the groups. In any other case nonparametric tests were performed. Statistical analysis was performed using the SPSS 22.0 software. A P value less than 0.05 (P<0.05) was considered for significant differences.

Distribution of MTHFR polymorphism in each group

A total of 86 patients with oligospermia, 81 patients with asthenospermia and 78 patients with normal fertility were enrolled in the present study. The three genotypes of cytosine-cytosine (CC), cytosine-thymine (CT) and thymine-thymine (TT) were noted in the 677 locus of the MTHFR gene in the Chinese population. The distribution frequencies of the three genotypes, along with the allele frequencies are shown in Table 1. The Chi-squared test was used to analyze the Hardy-Weinberg equilibrium between different case groups and the control group. The results indicated that the actual and the theoretical frequencies were consistent among the three groups (P>0.05), suggesting that the frequency of this sample was in accordance with the Hardy-Weinberg equilibrium and that the selected samples were representative of the population.

Table 1 Comparison between frequencies of different MTHFR C677T genotypes and alleles in the oligospermia, asthenospermia and control groups
Full table

Comparison of serum Hcy levels in each group 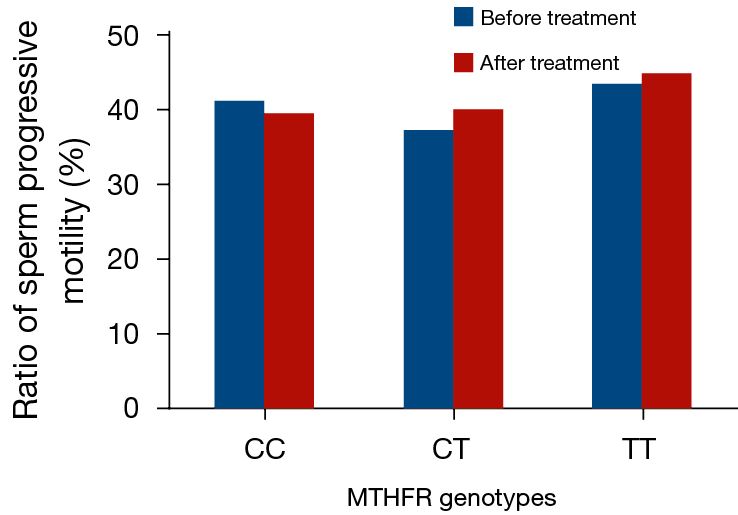 The comparison of the semen quality parameters group prior to and following folic acid supplementation in the asthenospermia subjects is shown in Table 4 and Figure 2. Sub-grouping was performed based on different genotype compositions, which demonstrated that the sperm density of the TT genotype was increased significantly following treatment compared with that noted prior to the treatment. The sperm density of the CT and CC genotypes exhibited no significant change. The ratios of sperm progressive motility of the CT, TT and CC genotypes did not change significantly prior to and following treatment.

MTHFR is a key enzyme involved in the metabolism of folic acid and methionine and catalyses the reduction of 5,10-methylenetetrahydrofolate to 5-methyltetrahydrofolate. This form is the main folid acid bioactive form in vivo, which has two biological functions: (I) it acts as a carrier of one-carbon unit in vivo and is involved in the synthesis of purines and pyrimidines by providing methyl groups for DNA, RNA and proteins, thus affecting normal DNA metabolism; (II) it acts as a methyl donor. 5-methyltetrahydrofolate is the substrate required for Hcy remethylation catalyzed by the enzyme methionine synthase. The end product is methionine, which results in the maintenance of a normal level of plasma Hcy (21).

Previous studies demonstrated that the MTHFR gene exhibited multiple single nucleotide polymorphisms (SNPs). Accordingly, the mutation at the C677T locus has been extensively studied. The replacement of cytosine (C) at the 677 locus by thymine (T) leads to an amino acid misalignment. Alanine, which is present in the catalytic region, is replaced by valine, thus leading to decreased heat tolerance and MTHFR activity. Chen et al. (22) reported that expression of MTHFR in the testes of adult mice was significantly higher compared with other tissues, such as liver and brain, suggesting its relevance in the process of spermatogenesis. Other studies demonstrated that following knockout of the MTHFR gene, mice can develop spermatogenesis disorders and loss of reproductive functions, which further confirms the relevance of the MTHFR gene in the male reproductive systems (23). Currently, a vast number of studies have focused on the association of the C677T locus between MTHFR polymorphisms and male infertility.

A total of 86 patients with oligospermia, 81 patients with asthenospermia and 78 healthy subjects were enrolled in the present study. PCR-chip assay was used to perform genotyping for MTHFR C677T. The obtained results indicated three genotypes in the Chinese population, including CC, CT and TT. Moreover, the frequencies satisfied the Hardy-Weinberg equilibrium in the three groups, which suggested that the selected samples were representative of the genotypes examined. The distribution frequencies of the MTHFR C677T were significantly different in the three groups, and the number of patients with mutations in the CT and TT genotypes in the oligospermia and asthenospermia groups was significantly higher compared with that of the control group, which was consistent with the results obtained by Qiu et al. who examined these genotypes in a Han population in Ningxia, China (24). This suggested that the MTHFR C677T mutation may be the predisposing gene for male infertility in China. In a study conducted in Italy, Paracchini et al. (25) demonstrated that the risk factor for infertility was increased within one year in patients with the TT genotype in the MTHFR C677T(OR =3.7, 95% CI was in the range of 1.4–10.4) locus, suggesting that the MTHFR C677T mutation may also be a risk factor for male infertility in Western countries.

Serum Hcy levels were also measured for the infertility population and the results revealed that Hcy levels were significantly higher in the asthenospermia group compared with those of the control group. Previous studies have shown that the MTHFR polymorphism may cause male infertility via hyperhomocysteinemia (26). Hcy is metabolized via two major pathways in the body as follows: production of methionine by re-methylation and production of cystathionine by sulfide transformation. The methyl group was provided by 5-methyltetrahydrofolate following remethylation of the Hcy. MTHFR is the key enzyme that catalyzes the transformation of 5,10-methylenetetrahydrofolate to 5-methyltetrahydrofolate. Previous studies have suggested that the decrease in MTHFR activity can limit the transformation of Hcy to methionine in vivo, leading to elevated serum Hcy levels (27). High Hcy levels exhibit considerable cytotoxicity and facilitate the oxidation of thiols generating high levels of oxygen free radicals in the cells. This process leads to a decrease in sperm methylation and an increase in DNA fragmentation (9). Moreover, it can also cause damage to sperm mitochondria and nuclear DNA, eventually damaging sperm function (8). Certain studies also have suggested that Hcy can inhibit glutathione synthesis, disrupt the dynamic balance of the production and clearance of active oxygen and consequently affect sperm function (28,29). Other studies have suggested that hyperhomocysteinemia can cause premature arteriosclerosis of blood vessels in the testes, affecting blood supply and leading to spermatogenic dysfunction (30).

In summary, the present study demonstrated that MTHFR C677T mutation may be a potential risk factor for oligospermia and asthenospermia in Chinese male subjects and that folic acid supplementation could significantly improve sperm density in patients with mutant genes. However, previous studies that examined the association between MTHFR gene polymorphisms and male infertility had shown inconsistent results in China and Western countries. No association was noted between the MTHFR polymorphism and male infertility in Spanish and Polish populations (12,31), which could be explained by the differences in genotype frequencies between ethnicity, as well as the differences in environmental and nutritional factors. These results may also be due to the sample size and due to the different criteria used for the selection of subjects. The accuracy or diversity of the relevant data should be further confirmed by multi-center studies with larger sample sizes.

Ethical Statement: The authors are accountable for all aspects of the work in ensuring that questions related to the accuracy or integrity of any part of the work are appropriately investigated and resolved. The present study was approved by the Ethics Committee of the International Peace Maternal and Child Health Hospital of the Shanghai Jiao Tong University (No. 17-0012).