Vasectomy reversal (VR) continues to grow in popularity since the development and advancement of microsurgical techniques in the 1970s (1). Currently nearly 3–6% of patients who have undergone a vasectomy seek VR (2). Men pursue VR for several reasons including major life events such as divorce, death of a child or to relieve post-VR associated pain (1). VR was considered the only option to regain fertility following vasectomy until the emergence of assisted reproductive technologies (ART) (3). The procedure maintains several advantages over ART, including cost effectiveness, minimal hormonal manipulation of the female partner, and the ability to harvest sperm from ejaculate rather than surgical extraction via procedures such as microsurgical epididymal sperm aspiration (MESA).

Vasovasostomy (VV) and vasoepididymostomy (VE) are the two established techniques to achieve VR (4). Surgeons performing VV first remove the portion of the vas deferens that was sealed during the vasectomy procedure and develop patent ends on both the testicular and abdominal sides of the vas. Once the intervening portion is removed, vasal tubular fluid is expressed, sampled, and examined for opacity and viscosity as well as sperm microscopic content. If sperm heads are present in the vasal fluid under microscopic analysis, fluid conditions are deemed satisfactory and a VV is undertaken by surgically re-anastomosing the proximal and distal portions (3,5,6). VE is indicated in cases where conventional VV may not result in successful VR. Several factors predict the need for VE, including epididymal obstruction, and concerning intraoperative findings such as the absence of sperm in the vasal fluid altogether (7). A prolonged time interval between vasectomy and VR is also a risk factor for VE (8). The exception is when copious clear fluid is found, even when devoid of sperm, vasovasostomy is indicated, and is usually successful.

VE is widely regarded as the most challenging microsurgical technique within the field of urology (9). Due to VE’s technical complexity, it is critical that patients understand and characterize the surgical volume and expertise of their potential surgeon. Furthermore, it is crucial to identify when providers elect to undertake VE as opposed to VV. The aim of our study was to assess current practice patterns regarding both intra-operative and post-operative considerations surrounding VE to characterize the differences, if any, between experienced and less experienced surgeons.

An 8-question electronic survey was generated through Survey Monkey (San Mateo, California, USA) and sent to members of the Society for Male Reproduction and Urology (SMRU). SMRU is comprised of various healthcare stakeholders including urologists and andrologists. Three hundred and twenty SMRU members were invited to complete the survey. Participants provided consent prior to submitting their anonymous responses. The survey was designed to assess details about case volume, surgical technique, and post-operative practices in the setting of VR. The survey questions are available as supplementary information (Supplementary file 1). The survey was released 3 times and open for a 2-month period. Only surveys with complete responses for all questions were included for analyses. Descriptive analyses were performed, and chi-squared analysis was used to determine the association between categorical variables. Statistical analyses were performed using Microsoft Excel (Redmond, Washington, USA).

A total of 320 SMRU members were contacted to participate in the survey. Seventy-four (23.1%) SMRU members completed the survey in its entirety over a 2-week period. The operative VR volume of survey respondents is summarized in Figure 1. Respondents included in this study performed various numbers of VR annually with most surgeons (18/74, 24.3%) performing between 11–20 VR per year. A majority of respondents (40/74, 54.1%), indicated that they performed VE on one or both sides in 0–20% of their cases. Nearly half of respondents (34/74, 45.9%) undertook VE in 20–60% of VR cases. Chi squared analyses revealed a statistically significant increase in the rate of performing VE in surgeons who performed more than 30 VR’s annually (n=28) compared to providers who perform less than 30 (n=46) annually (P<0.0001). 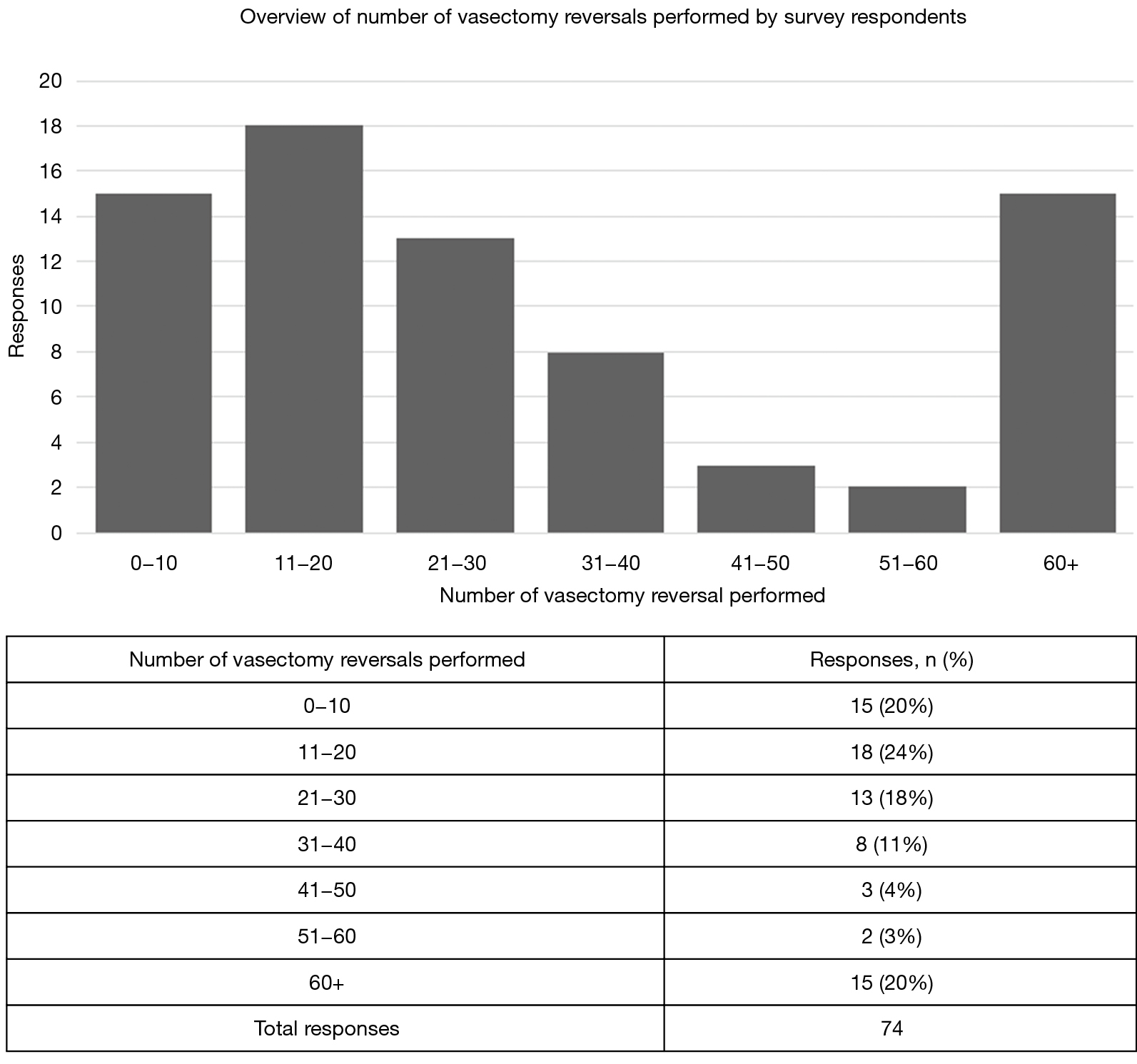 Participants were queried upon preferred surgical technique to create an epididymotomy (Figure 2A). Most respondents (55/74, 74.3%) reported that they created an epididymotomy by placing two 10-0 sutures into the tubule, followed by a sharp incision between the needles. Participants were also queried upon preferred anastomotic surgical technique (Figure 2B). An intussusception anastomosis was the most commonly reported technique with 46.0% of respondents indicating that they utilize a longitudinal stitch placement, while 35.1% place sutures horizontally. Providers were also asked to identify the time period at which they order their first post-reversal semen analysis (SA) (Figure 3A). The most commonly reported time interval to evaluate the first post-reversal SA was 6–8 weeks (29/74, 39.2%). No significant association was present between case volume and epididymotomy and anastomotic surgical technique. 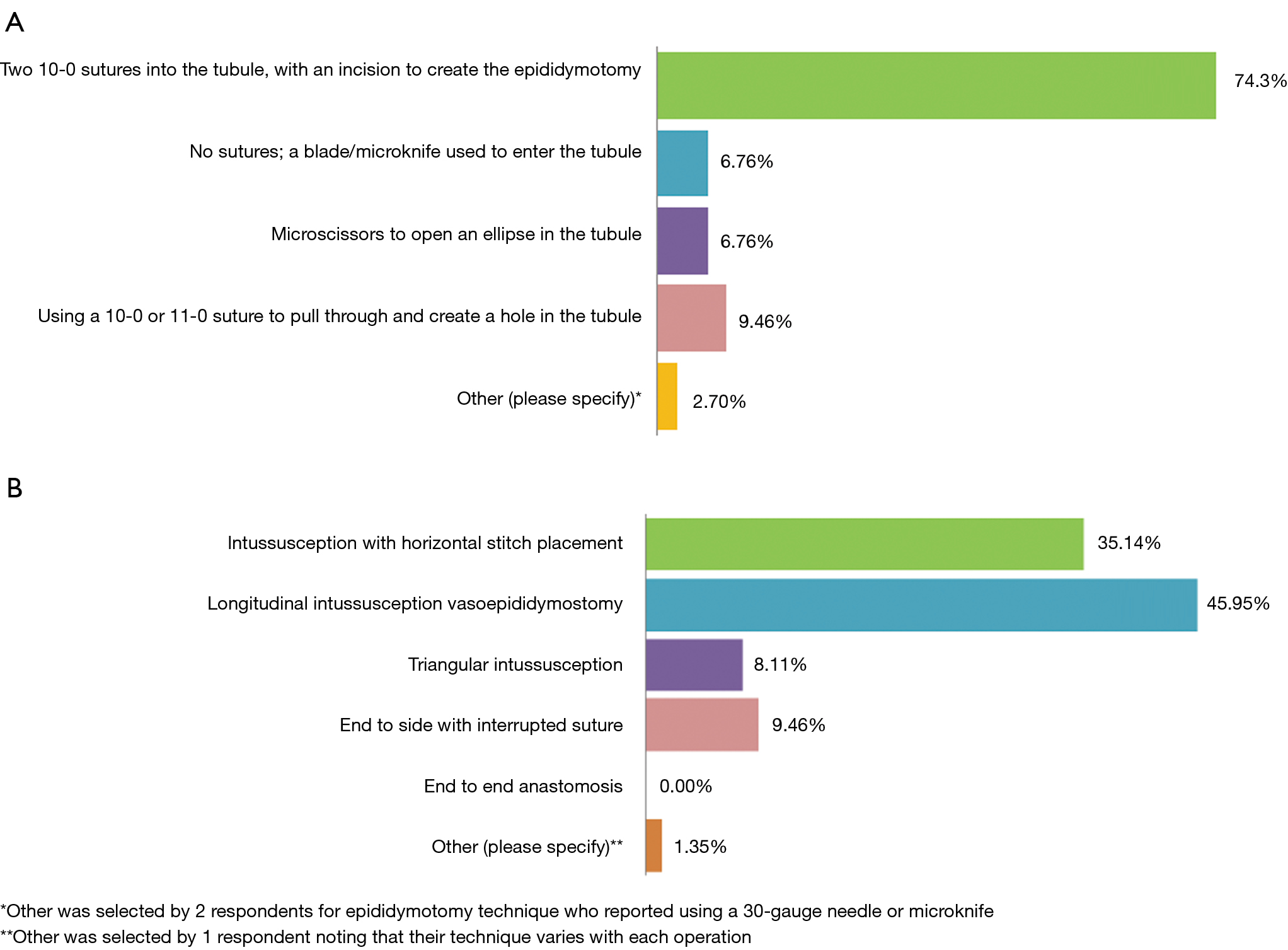 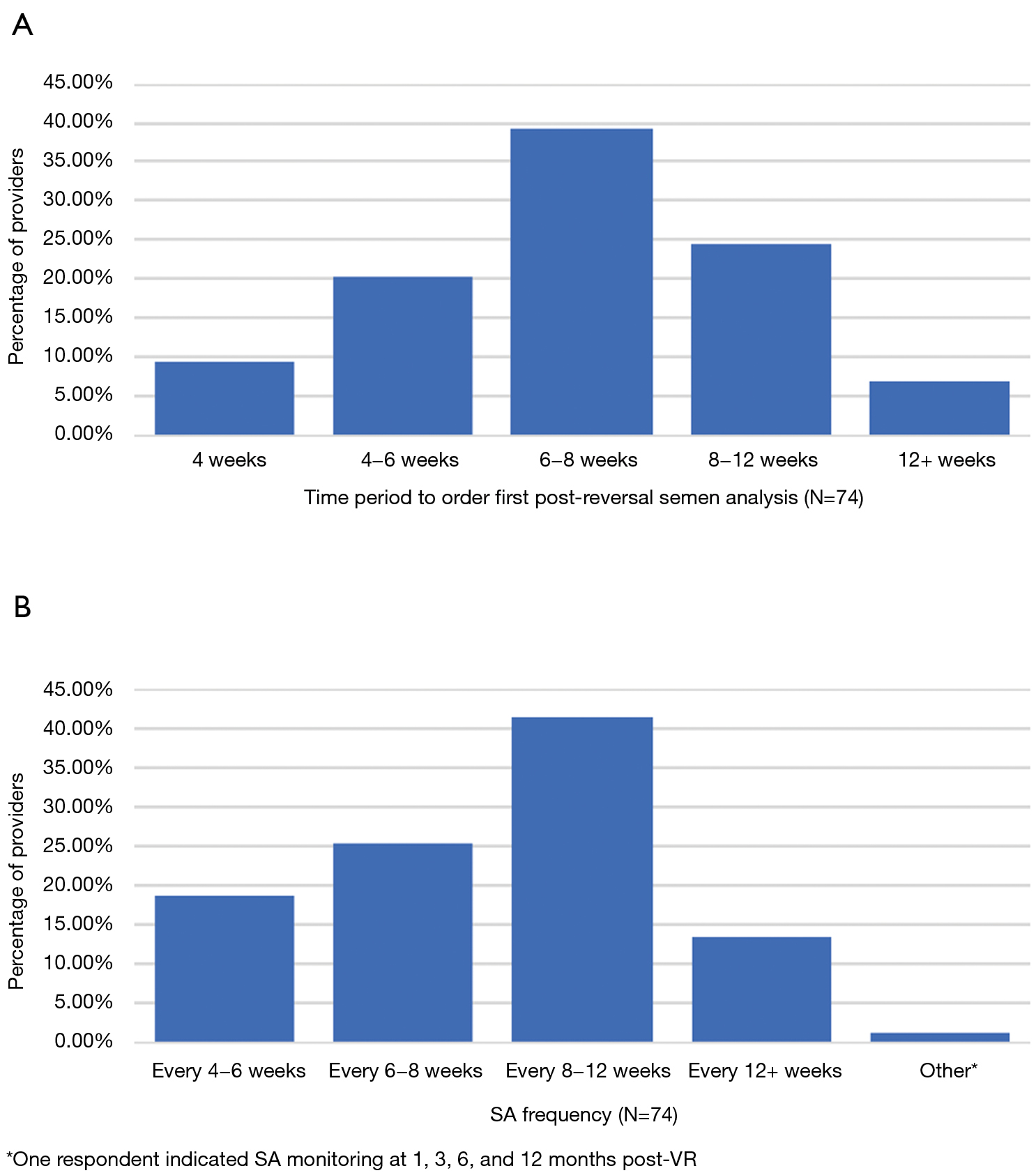 VR remains a common surgical procedure among men seeking fertility. Despite the rise of ART, VR remains a feasible, effective and typically permanent option for the male partner (10). The operative experience required to perform successful VR, particularly VE, is considerable. Consequently, undertaking an investigation of rates of VR and VE specifically is critical due to the fact that increased microsurgical technique experience is predictive of VE operative success (9). Despite its technically challenging nature, Grober et al. identified that VE has emerged as an effective VR option for men with obstructive intervals (OI) greater than 10 years (11). Namekawa et al. confirmed these findings and identified that VE outcomes have steadily improved over the past decade in appropriately selected patients (3). Although the number of urologists offering VR is increasing, limited work has been undertaken to characterize its learning curve and the management practices of this expanding provider pool.

We identified notable differences in VE operative volume when stratifying survey participants based on the number of overall VR performed. Our data highlighted that surgeons who undertake higher VR volume were more likely to perform VE. Specialists may be receiving more challenging patients if other providers have identified a patient with a potential need for VE. Practitioners with lower volume or less VE experience may wish to refer complex VR cases to providers with more microsurgical experience, since factors such as ruling out epididymal obstruction are difficult to determine pre-operatively (3,12,13). Providers with increased experience in both VE and VV produce significantly better patency rates, particularly in patients with long OI (14,15). A 2015 review surveying high-volume microsurgeons identified an odds ratio of 3.8, in reference to post-operative patency, in favor of patients operated on by practitioners with a higher volume (16). Providers with more VE experience have the requisite skill level to perform VE and ensure comparable outcomes between cases needing VV and VE (11). Lastly, providers with increased VR experience overall might have the necessary acumen to intraoperatively assess when VE is required based on sperm findings. Currently, there are guidelines to suggest when VE or VV are required but practices are not standardized (8,17). Providers with higher VR volume and operative experience may be therefore be better positioned to appropriately identify which VR technique will increase the likelihood of success.

Our results demonstrate heterogeneity in the adjunctive therapies and SA protocols that providers employ to manage cases with subpar post-VR SA results. Most providers pursue some form of medical management in this setting. The majority of respondents manage post-operative inflammation through NSAIDs or steroids. Currently, there are no guidelines to dictate the optimal VR postoperative course and the heterogeneity of responses pertaining to specific pain management reflects provider-dependent variation. Survey responses indicate that referral to IVF is preferred over attempts to repeat surgery after a suboptimal VR. Intraoperative sperm cryopreservation is often recommended in the setting of prolonged OI or other factors that risk VR failure (18). However, this is an area of active investigation with some data indicating that VE may be more appropriate than IVF (19). Nevertheless, in our study, repeat surgery is less commonly pursued, given the challenges posed by undertaking redo VR (20). Sixty-eight percent of participants in this study highlighted that they preferred to monitor SA in the setting of subpar post-reversal SA parameters at an interval of 6–12 weeks. This SA timeline aligns with prior recommendations put forth by Belker et al. who identified an optimal interval of 2 to 3 months (21).

Another core component of this investigation involved understanding surgical techniques employed by providers who undertake VR. Eighty-nine percent of our respondents indicated that longitudinal intussusception VE (LIVE) and triangular intussusception VE (TIVE) techniques were the preferred anastomotic approach. These results are consistent with prior work investigating VE surgical techniques. Schiff et al. highlighted that LIVE and TIVE techniques yield significantly lower failure rates compared to other techniques such as end-to-end (EE) and end-to-side (ES) anastomosis (22). Late shutdown, or azoospermia after an initially successful VE, is one of the major causes of failure, but LIVE utilizes fewer sutures and thus constitutes a simpler, safer, and more successful technique than those previously used (9). Our results highlight that providers offering VE are undertaking the procedure in line with best practices that have been previously established in larger prospective studies investigating VE outcomes.

There are limitations inherent in the design of this study. Our survey was confined to members of the SMRU, a group of largely fellowship-trained infertility specialists, and therefore this study doesn’t necessarily represent the population of general urologists who perform VR. Moreover, our small sample of 74 (23.1%) respondents may comprise the more active or specialized surgeons within SMRU. Due to this selection bias, the generalizability of our findings is limited and may not capture the heterogeneity of surgical techniques and practices surrounding VR and VE as well as the practice patterns of SMRU members who did not respond to this survey. Although our response rate was 23.1%, this either aligns with or improves upon rates observed in prior investigations with this form of study design (23,24). Recall bias may also interfere with our stratification of practitioners based on case volume and VE proportion. This could impact our characterization of practices based on experience. Our measurement of experience was case volume per year rather than lifetime case volume, which may be a better indicator of experience despite suffering from greater recall bias. Nevertheless, our study provides valuable insight into intraoperative and postoperative practice patterns and is part of the incremental progress towards a standardized management plan for VR.

The success of VE in epididymal obstruction, its relative cost-effectiveness, and its utility in repeat VR distinguish it as a powerful technique for complicated VR patients. Our study aligns with prior work that has identified surgical experience as an integral factor to the success of VE, and that this procedure should be reserved for providers with extensive microsurgical experience. We identified several variations in provider VR experience, operative technique and postoperative management. The heterogeneity of respondents’ intraoperative and postoperative practices demonstrates the need for future efforts to standardize VR related protocols. Further understanding of the precise factors that indicate VE over VV and identification of best practices in postoperative management are required in order to help facilitate the development of these guidelines.

2. How many vasectomy reversals do you perform per year?

3. What percent of these do you estimate involve a VE on at least one side?

4. What technique do you use to create your epididymotomy?

A. Two 10-0 sutures into the tubule, with an incision to create the epididymotomy

B. No sutures; a blade/microknife used to enter the tubule

C. Microscissors to open an ellipse in the tubule

5. What is your most commonly performed anastomotic technique?

A. Intussusception with horizontal stitch placement

D. End to side with interrupted suture

6. At what time period do you order your first post-reversal semen analysis?

7. What adjunctive therapies do you employ in the setting of a subpar post-reversal semen analysis? (rank 1–5 from your first maneuver to your last maneuver)

8. How often do you follow SA’s in the setting of subpar post-reversal SA parameters?